Have you ever strolled through a German supermarket and spotted those weird colored eggs? Do Germans sell easter eggs all year around? I’ve been living here long enough and have asked myself that question plenty of times. I’ve never been quite brave enough to actually buy some of them and figure out what the deal is with those oddly coloured eggs, but every time I walk past them I ask myself who would actually buy them. With easter fast approaching, I decided to get demystify those strange coloured german supermarket eggs.

Do German Supermarkets sell colored easter eggs all year around?
The short answer: No. And Yes.

Now for a longer explanation. 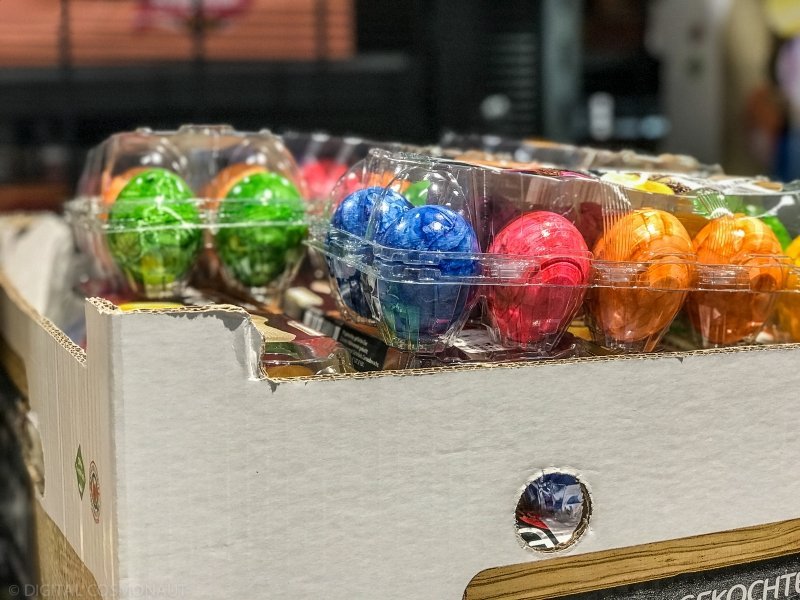 So if you are of the American persuasion, you’ll be used to buying your eggs from a refrigerated section. Americans do this because their eggs (if they come from a farm with a certain amount of chickens) are legally required to be washed before they are sold – and as Americans like to do, they wash them with chlorine (just like their chicken – thats why its banned in Europe). The washing process kills of some of the salmonella that might be sticking to those eggs.

I think I can speak for most Germans and say, I don’t want to die from Salmonella – but there’s a different process involved here. When you chlorine wash your eggs, you destroy the preventative coating of the egg, making it vulnerable – and thats why refrigeration is required. In Germany, they straight up leave the egg as it is.

The rudimentary cleaning aspect is then taken care of throughout the supply chain process, hence why you might often find feathers and dirt still attached to some eggs when you buy them. With the protective layer still attached to the egg, you don’t need to refrigerate them. The number of egg related Salmonella cases is about the same in the US and Germany – so each to their own.

Heres another fun fact: Did you know Berlins shortest street – the Eiergasse (Literally Egg-Alley) is 266 eggs long and dates back to the 12th Century?

So why bother dying hard-boiled eggs in various colors if they aren’t meant for easter?

So those hard-boiled german supermarket eggs are dyed in various colors for an “ingenious” reason. They arent colored just because they look pretty and they can sell a truckload more during easter – but because the thick coloring actually contains a natural resin which forms a protective coating around the hard-boiled egg – preserving it up to three months(!). Admit it – now that you know, you can’t unsee them when you pass by them in the supermarket. 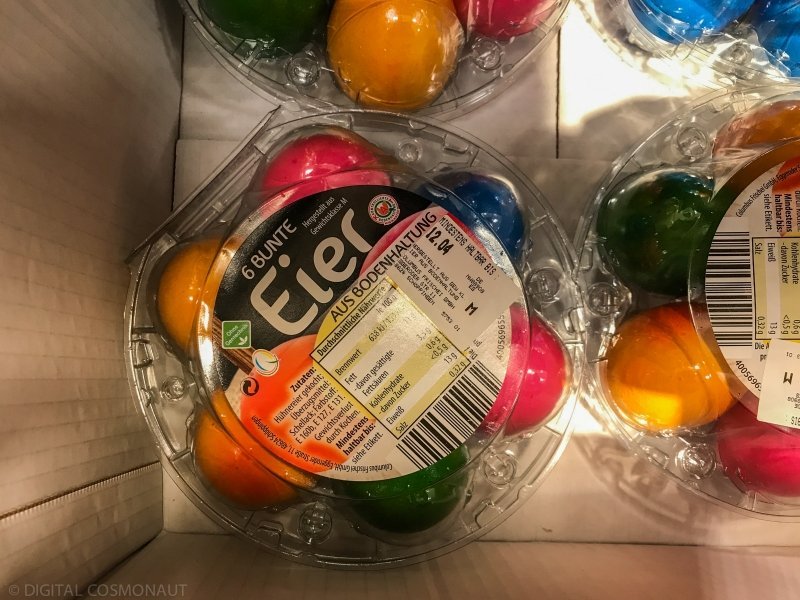 Why don’t german supermarkets label the hard-boiled eggs in some way other than coloring them?

Well the reason for this might be because customers don’t actually look at stuff like that, and its easier to recognise that an egg has been hard-boiled when its colored brightly red or blue. And colored hard-boiled eggs supermarket eggs probably sell better than normal looking ones. It seems like there isn’t a EU norm either, which regulates how these eggs should be labeled or colored. The box in which the eggs are shipped in do state that they are hard boiled – as do the small labels on the egg cartons. 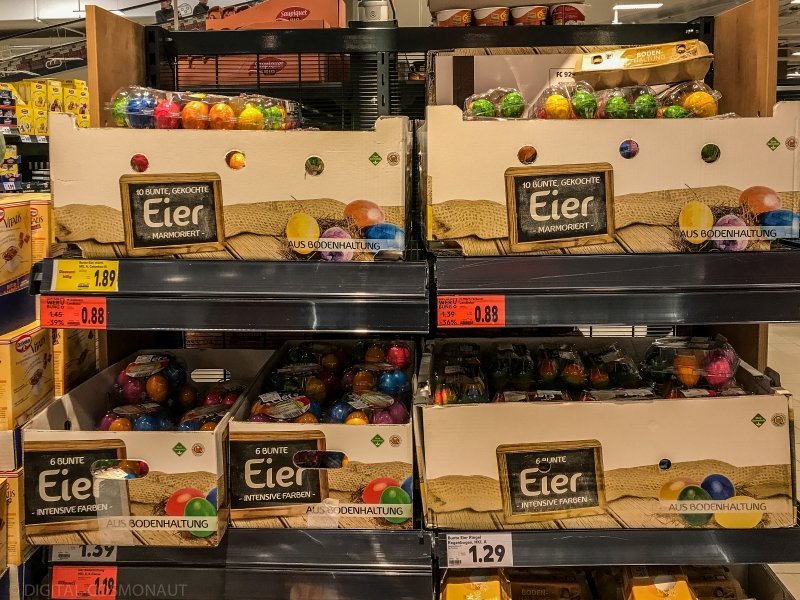 Beware though! The german demand for eggs, especially around easter often can’t be matched by local farmers – who often have to import up to 50% of their production (often from outside of the EU). Unlike fresh eggs, hard-boiled eggs don’t need a visible product code (which you can find stamped on all fresh eggs).

So you don’t actually know where those eggs come from, and how the chickens are treated. Though some producers have started labeling their products a bit better, the whole process is a bit “suspect”.

Another thing you should watch out for when buying a hard-boiled colored egg is if the egg-shell is cracked. If there is a crack in the egg-shell, then the egg most likely wont keep as long as an “un-cracked” hard-boiled egg.

And there you go. Those colored eggs in german supermarkets are just plain old hard-boiled eggs with a protective color coating.

PS: I still haven’t bought any of those eggs. I couldn’t muster up the appetite to try them.