When venturing out into the forest surrounding Berlin you can never be quite sure what lost and abandoned places you’ll stumble upon, especially when you head just a few kilometers west of Berlin to Dallgow-Döberitz.

The first large-scale maneuver – with over 44,000 soldiers – was held in Dallgow-Döberitz in 1753 under Frederick II, but the area was only turned into an official Truppenübungsplatz (Proving Ground) in 1895 by Kaiser Wilhelm II. An Aviation school was set up here in 1910, and by 1914 the Fliegerbataillion Nr. 1 was stationed here – under which the fighter ace Manfred von Richthofen (The Red Baron) was trained.

By the mid 1930s, the Nazis began training stationing and training their troops in the Döberitzer Heide, – most notably at the Löwen Adler Kaserne – including the infamous Legion Condor which set off to fight in the Spanish Civil war. The Soviets moved in by 1947 and ended up stationing missiles and 20,000 troops in the area. After the ratification of the 2+4 Treaty and the German reunification, the Soviets went back home and the Truppenübungsplatz Döberitz was left abandoned. But not for long. The German Bundeswehr snagged a chunk of the land in Dallgow Döberitz and continues to use it to this day as a training ground – while the rest of the area was turned into a nature reserve.

If you stray off one of the obvious nature paths in the Döberitzer Heide and wander into the undergrowth you’ll soon spot some suspicious craters dotted around the forest floor. After a few minutes of wandering through the thick green undergrowth you’ll see a clearing between the trees and what appear to be the rusting remains of a vehicle of some sort.

Upon closer inspection it turned out to be the abandoned remains of a tram, unceremoniously left behind for nature to reclaim. One begs to question how a Tram ended up abandoned in a forest in the Döberitzer Heide, but after some quick research and the help of some very knowledgeable people (thank you very much Markus) the mystery was soon cleared up.

The Tram was built by the LOWA – an acronym for the VVB des Lokomotiv- und Waggonbaus of the GDR (the Association of state-owned enterprises of locomotive and wagon construction) which was founded in 1945. The VVB LOWA changed name in 1954 into the VVB Schienenfahrzeugbau (VVB rail vehicle construction), and then again later into the VEB Kombinat Schienenfahrzeugbau der DDR. The LOWA essentially bundled all locomotive and wagon construction companies into one.

The abandoned Tram – a model LOWA ET50, was built in 1951 and was put into service with the Potsdamer Verkehrsbetriebe with the number 131. After 25 years of faithful service, it was handed over to the red Army for “exercise purposes” in 1976.  What exactly happened with it during the years can’t really be said – but it ended up on the Truppenübungsplatz in the Döberitzer Heide. Surrounded by concrete rubble and craters, with trees growing out of its frame – the abandoned Potsdamer Tram has become a nice little lost place – if you know where to find it. 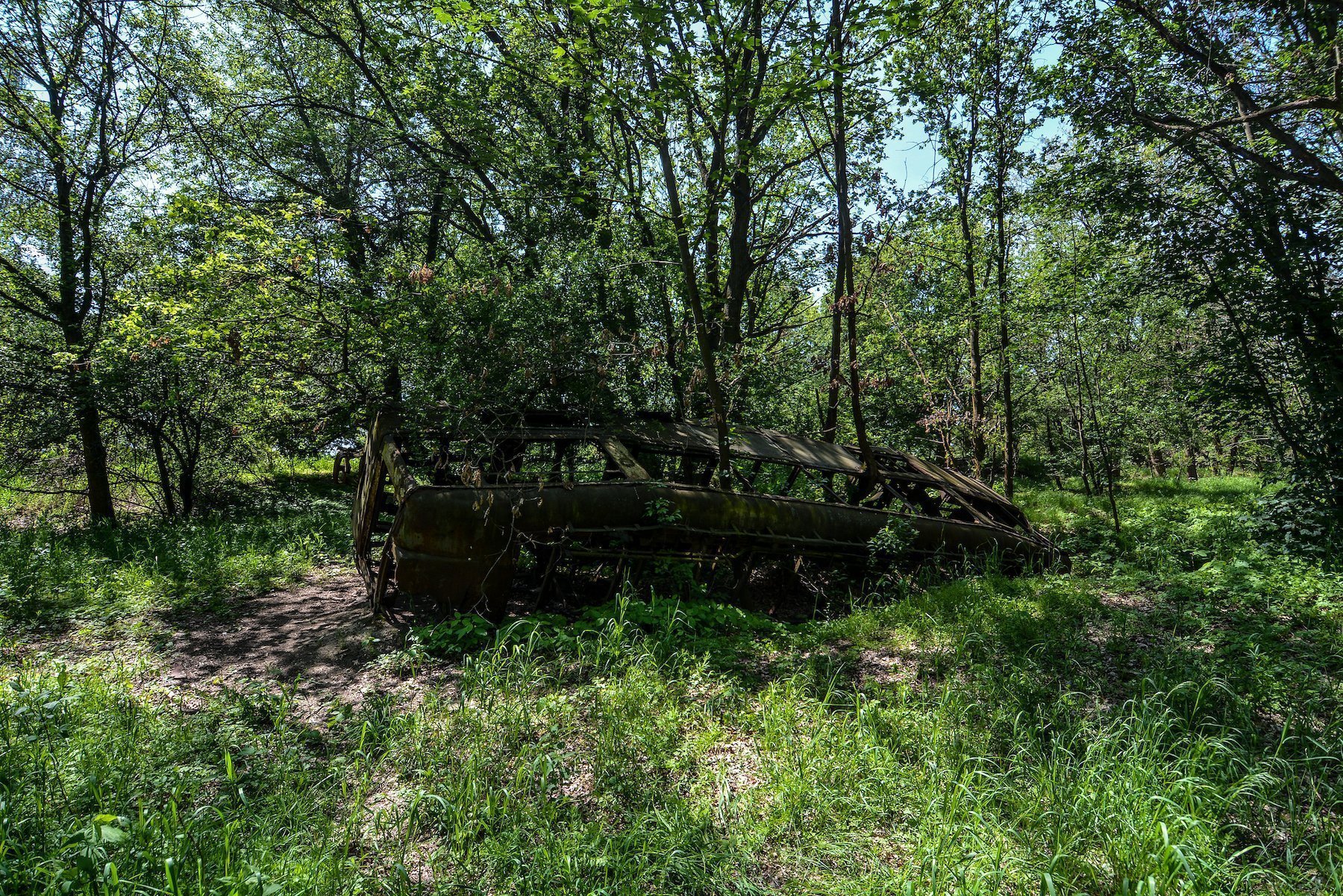 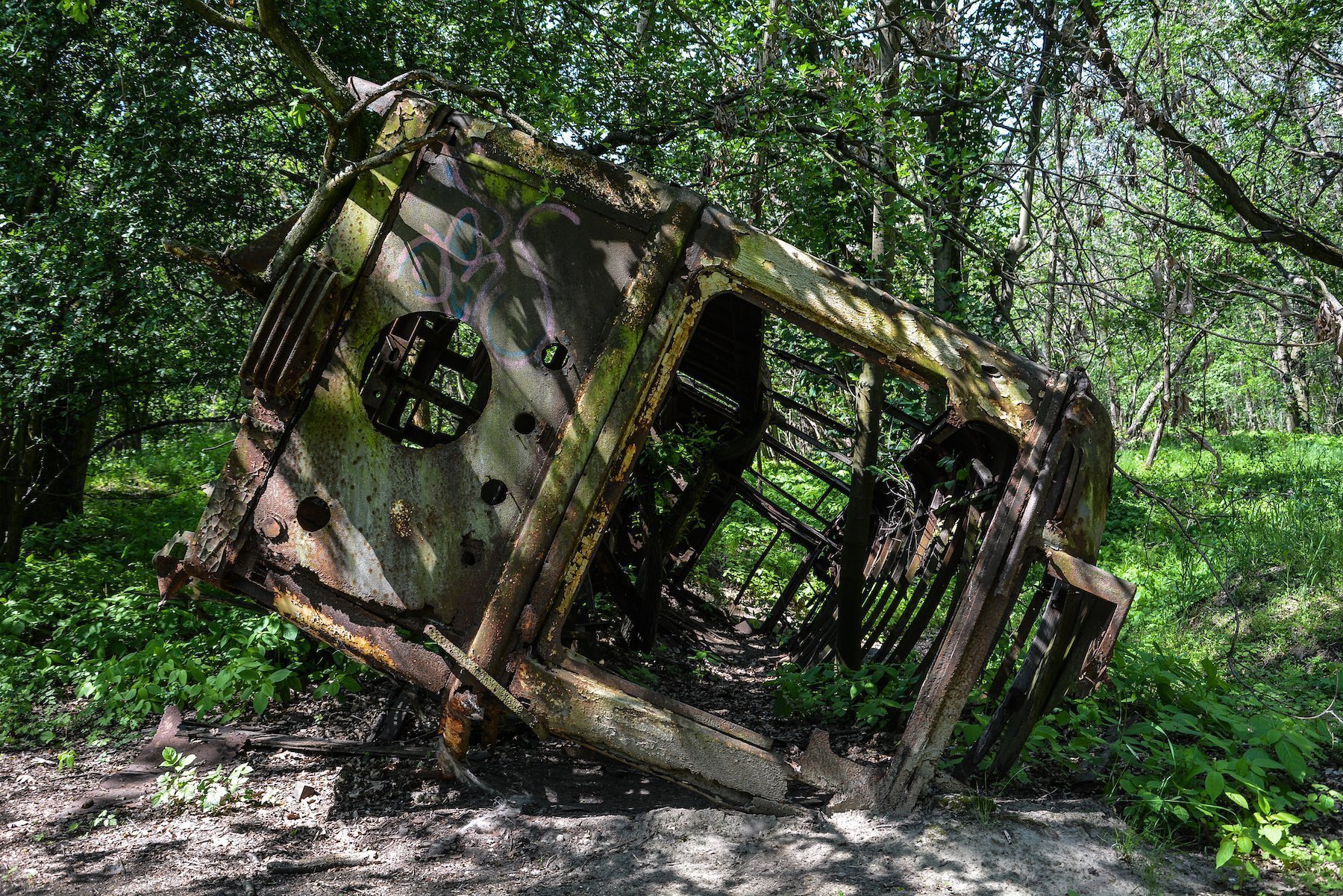 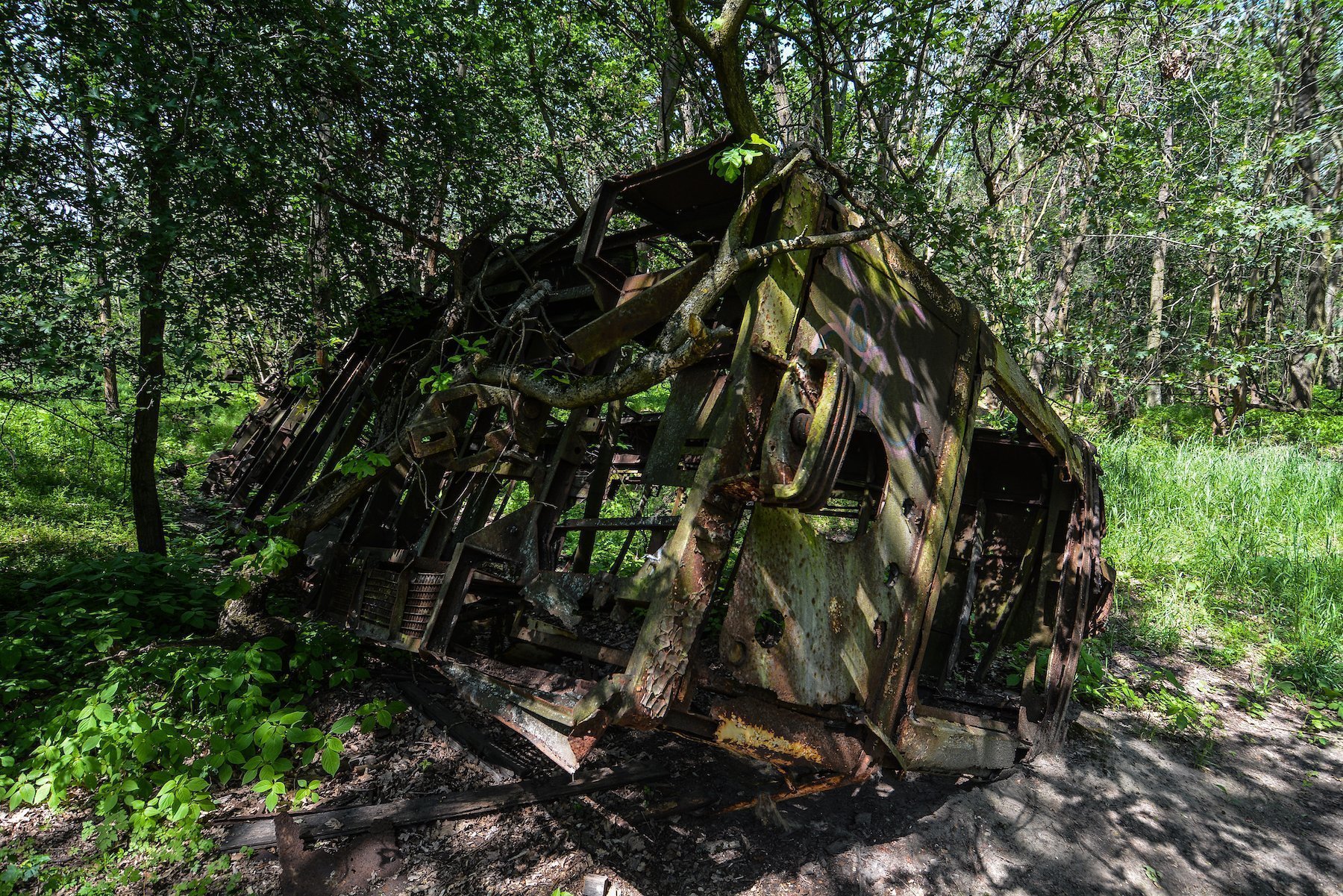 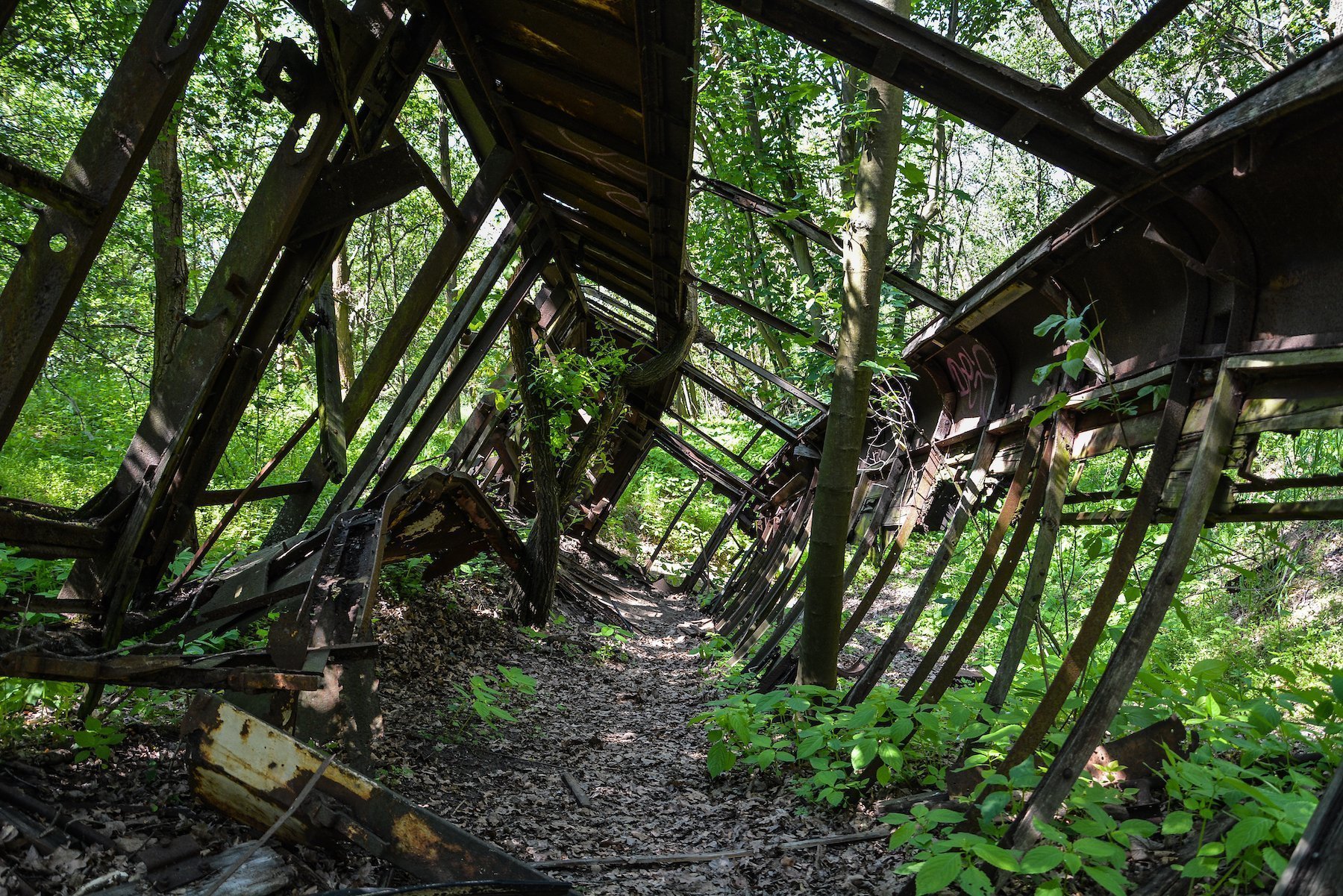 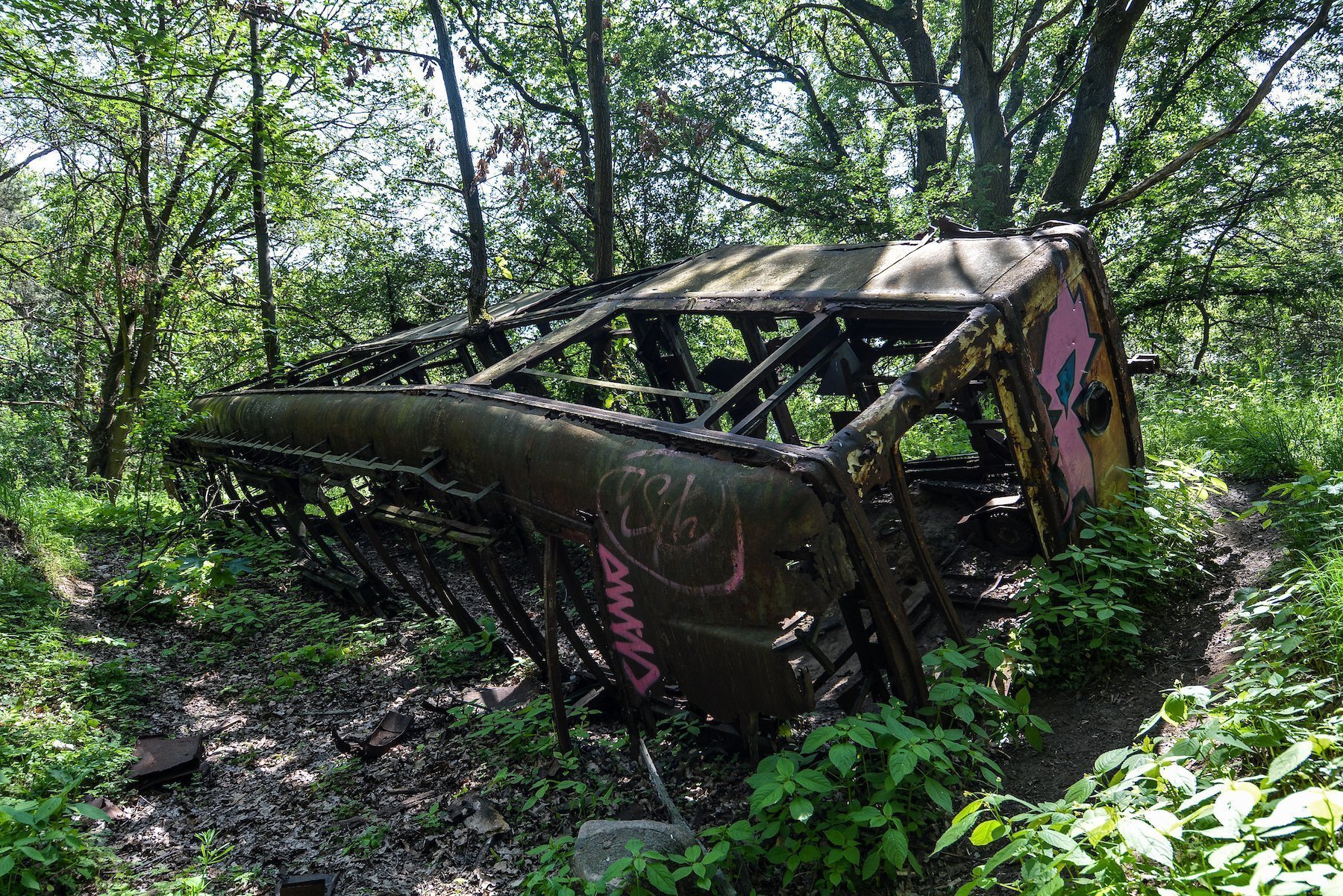 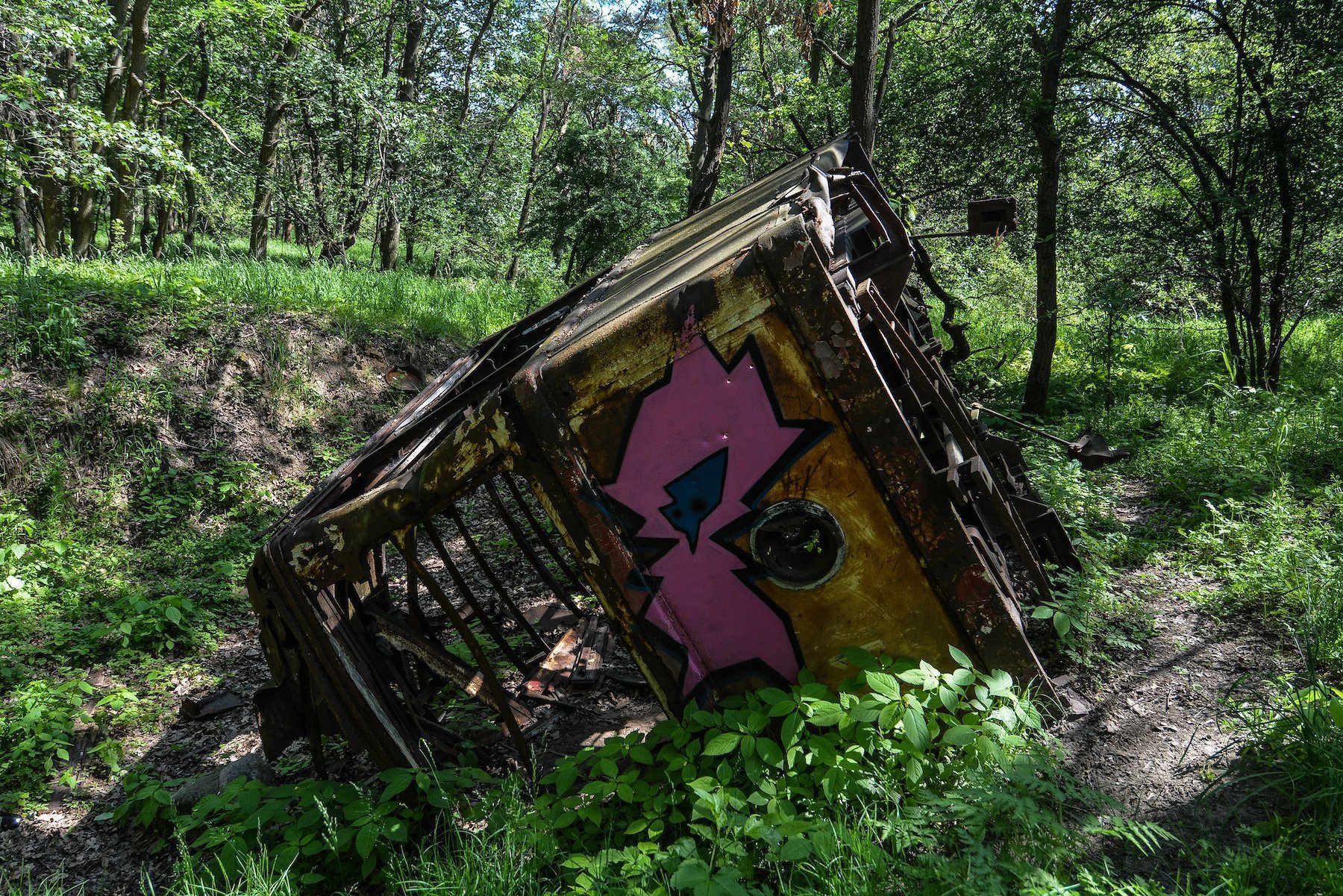 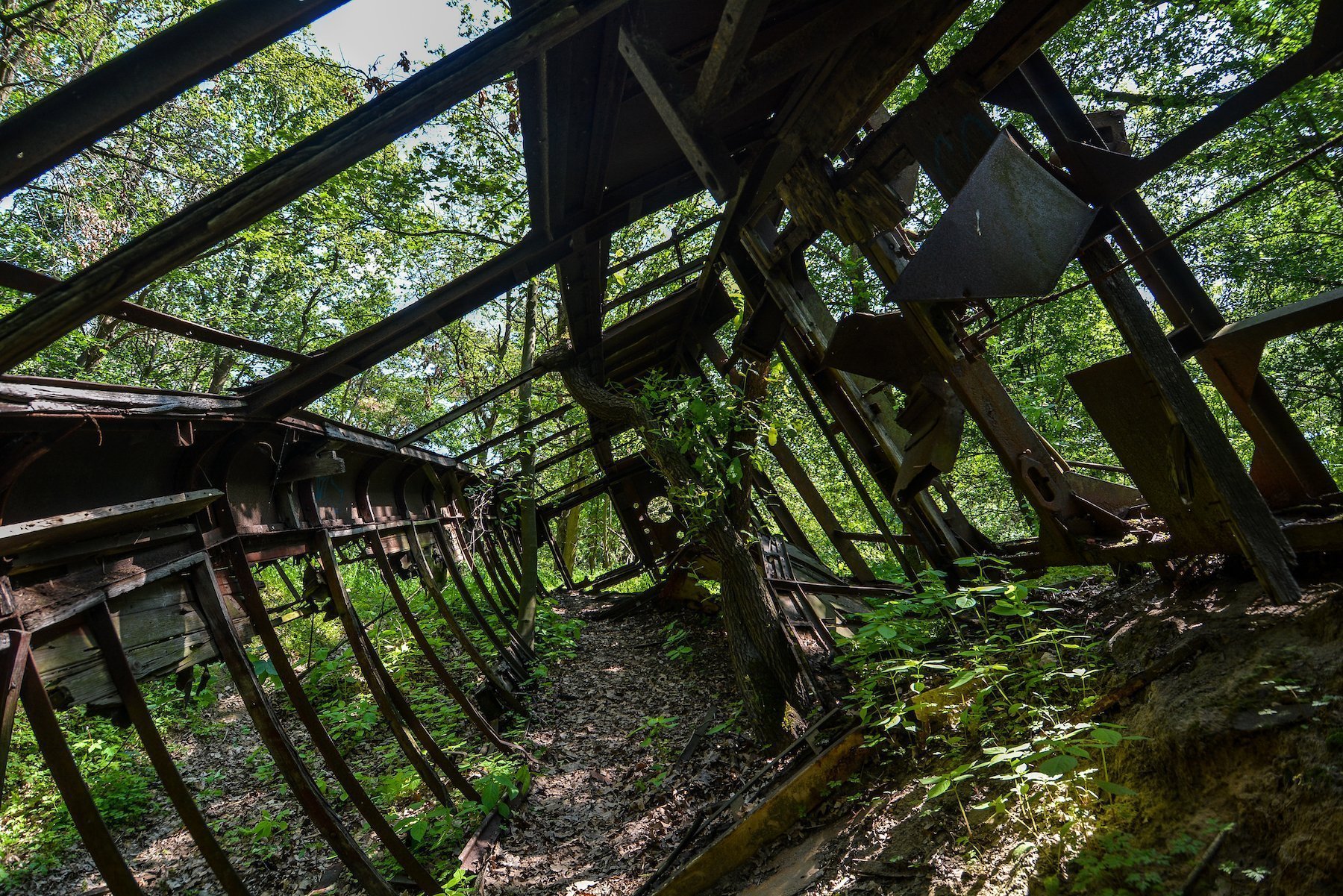 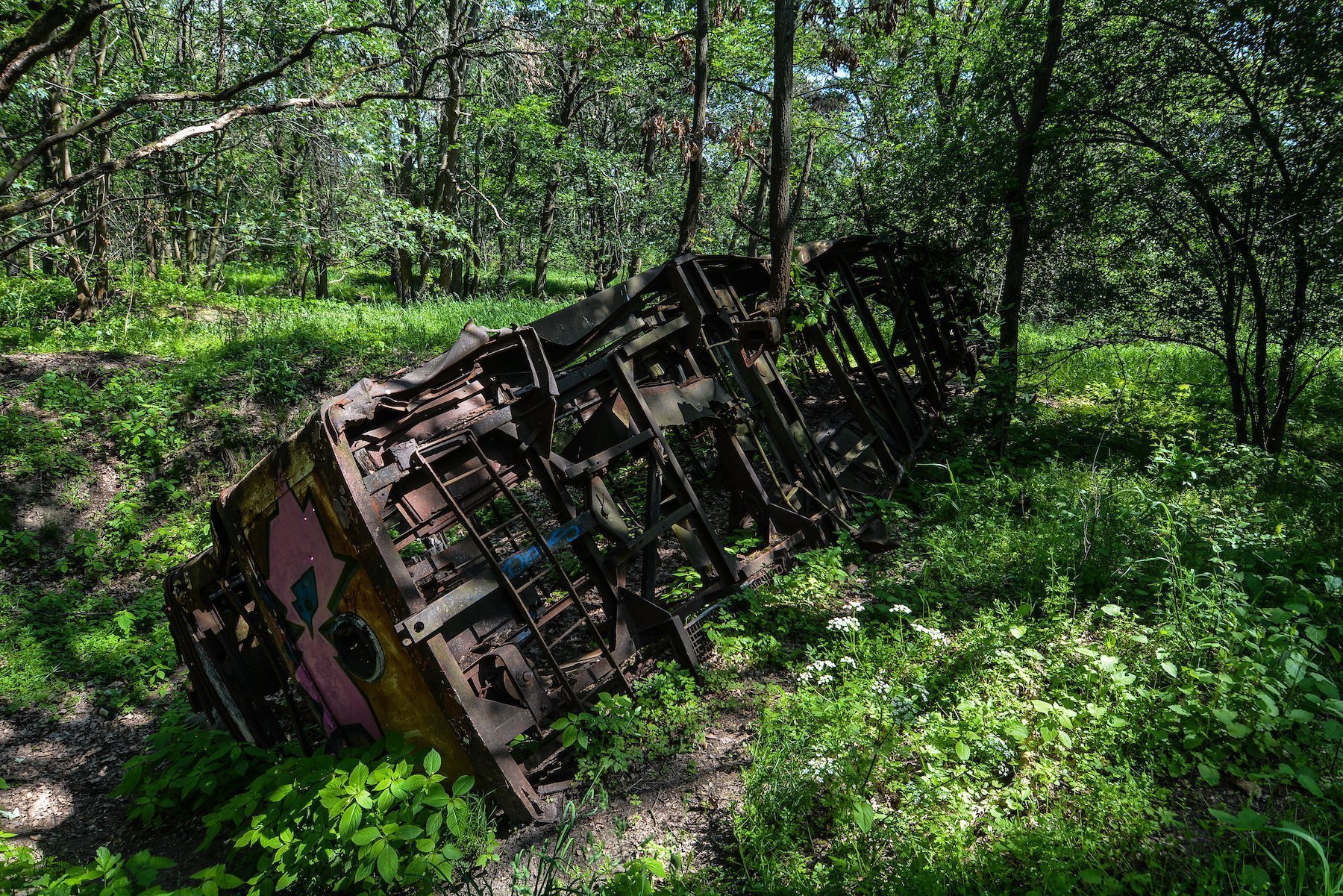 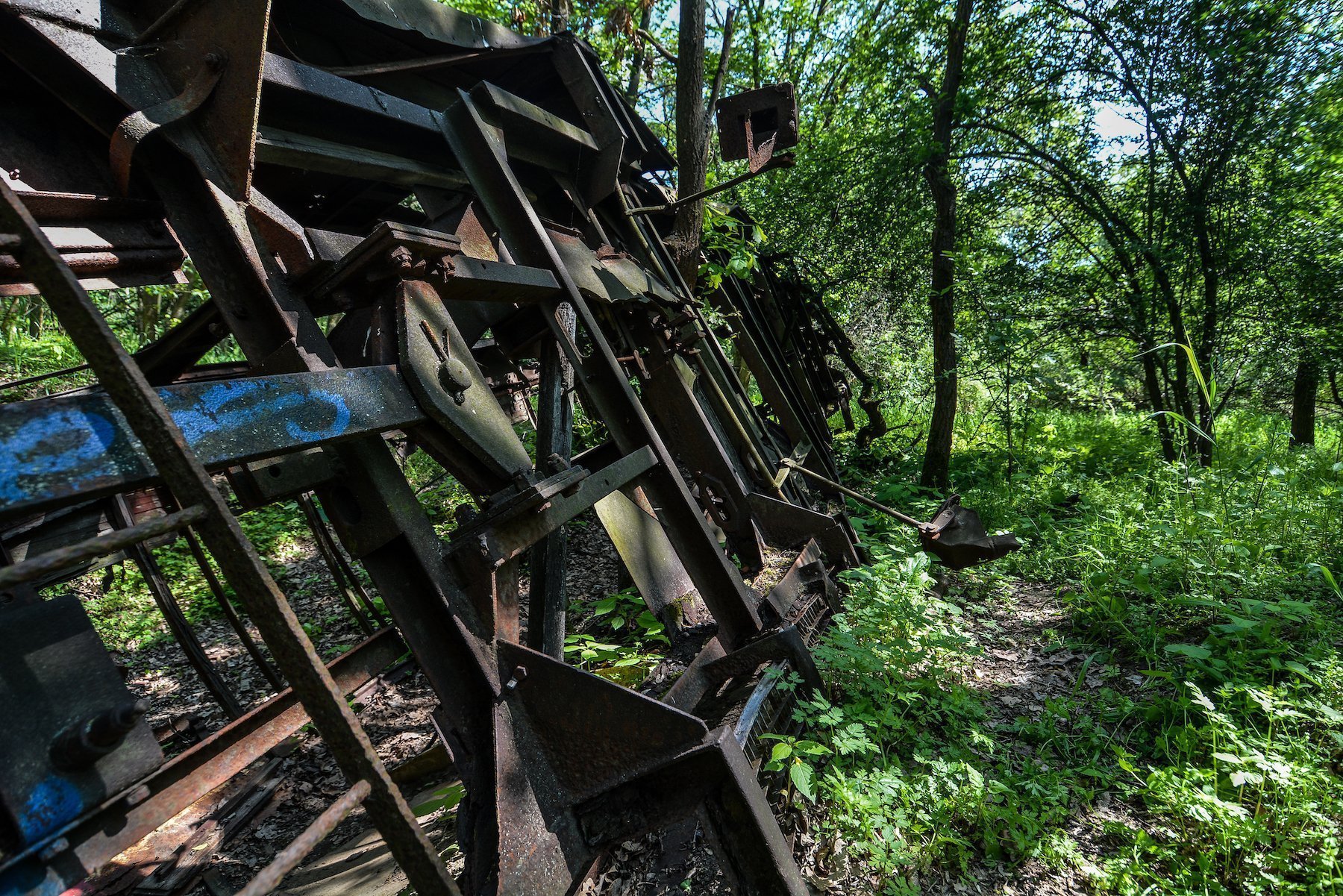 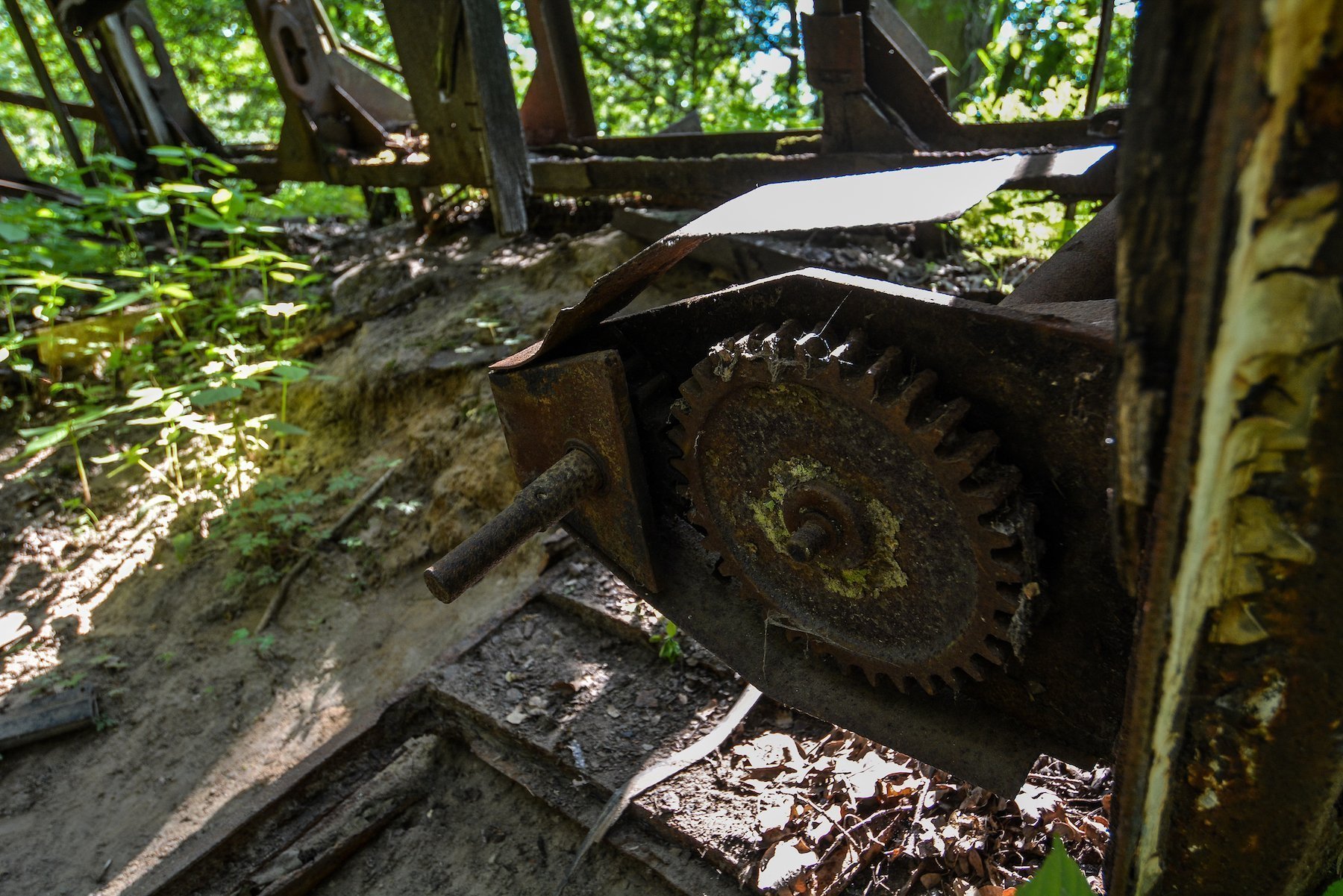