Oranienburg, 35 kilometers to the north of Berlin is a city with a heavy heritage. Not only was it home to two concentration camps – the KZ Oranienburg (one of the first in Germany) and the KZ Sachsenhausen, but it also housed a varied assortment of industrial sites critical to the Nazi industry. Abandoned remnants and lost places can be found around every corner especially former military installations like the Flugplatz Oranienburg – testing ground of the first stealth fighter, the SS Bath and Boiler House, a Nazi communications bunker, military barracks, munition depots and bunkers, a Shooting Range in Sachsenhausen and Nazi Dog Training School – and the Versuchsstelle für Höhenflüge.

Oranienburg wasn’t just home to Concentrations Camps and SS infrastructure – it was also home to the Versuchsstelle für Höhenflüge. The Versuchsstelle für Höhenflüge (trial site for altitude flights) was a research institute of the Reichsluftfahrtministerium (Ministry of Aviation) devoted to researching new methods of military surveillance such as high-altitude cameras as well as researching new technology devoted to high altitude flights such a pressurized cockpit and high-altitude rescue.

The Versuchsstelle für Höhenflüge was also devoted to analyzing crashed enemy aircraft to gauge the enemy’s technological advancements, and last but not least, the VfH was tasked with sending out high altitude aircraft on reconnaissance missions, in the belief that the high altitude would make them invulnerable to enemy fire.

The technical research was carried out in several sites in norther Germany such as Peenemünde, Rechlin (home of the Weißen Häuser, a test to build a bomb proof city), Werneuchen and Oranienburg. Animal, and later human experiments were carried out at the Concentration Dachau to test simulated rises and drops in pressure. From the beginning of these tests, it was planned and calculated that there would be no survivors.

The Versuchsstelle für Höhenflüge in Oranienburg was located adjacent to the Flugplatz Oranienburg – which made sense as it gave them the perfect testing ground for their research equipment. The grounds of the Versuchsstelle consisted of a multitude of buildings including barracks for forced laborer’s as well as a DAF-Camp (DAF – Deutsche Arbeitsfront, the German Labour Front, which had come to replace all workers unions in Germany).

Oranienburg and its military and industrial facilities only became a target for the allied campaigns relatively late in the war – and the first bombing waves were relatively light. Only towards 1945 did the Allied raids increase, and for an interesting reason as well. The Soviet forces were advancing rapidly, and if they would capture Oranienburg, they would potentially find valuable technology and personal (think of Atomic Energy / Weapons research, stealth aircraft etc.).

So, the Americans decided that it would be best to bomb as much as they could so the Soviets wouldn’t get their hands on anything good. Thanks to these campaigns, and the complete destruction of the Auerwerke (with its uranium oxide enrichment), Oranienburg became (and still is) the most radioactively contaminated place in Germany.

Nevertheless, the Soviets took over the Flugplatz Oranienburg and the Versuchsstelle für Höhenflüge. The Red Army stayed until their withdrawal in 1994 – handing over the property, or what was left of it to the German state. Most of the Versuchsstelle für Höhenflüge has since been demolished as various industries have moved in to use the cheap land.

The visible remains are concrete slabs and a giant bunker which has been converted into a dumping ground, fire place and open toilet. The inside is hardly worth visiting as its pitch black and heavily vandalized. Almost all of the original traces are gone, but once can spot various Russian graffiti’s (which I found impossible to decipher in their current state). The Bunker, despite is size is quite easy to miss at first as the trees have completely hidden the building.

If one chooses to take a long stroll between the canal and some quaint houses, you’ll stumble across what seems to be soviet blast fences hidden in the brush. Signs everywhere tell you not to trespass and that there might be munitions still in the ground, but it seems like these warnings haven’t deterred the locals from walking their dogs in the area.  The rest of the area is still enclosed by some vintage barbed wire, most likely left in place to protect the adjacent Rewe Supermarket storage facility.

Overall, not much has survived of the Versuchsstelle für Höhenflüge in Oranienburg, but discovering the remnants adds another interesting piece to the puzzle of what the Nazis left behind in Oranienburg. 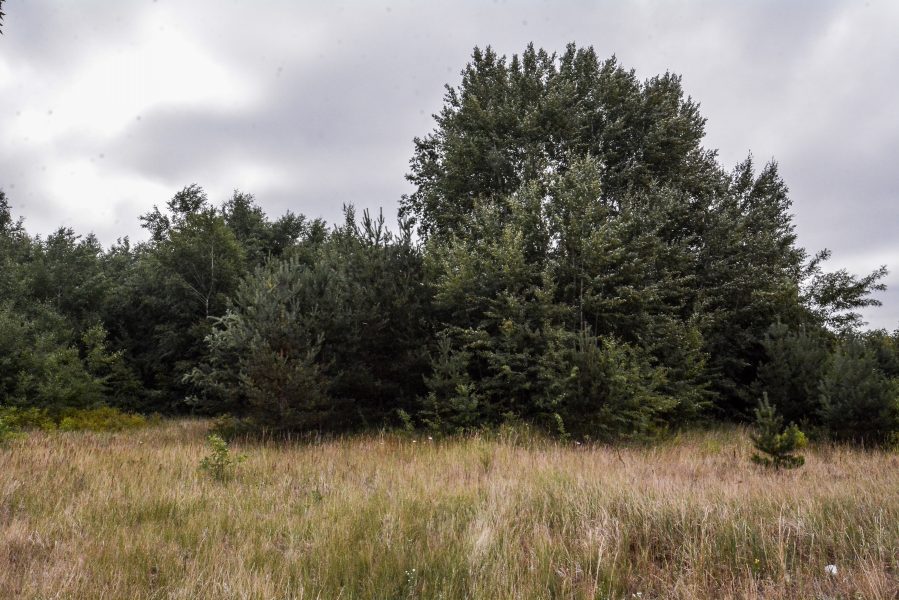 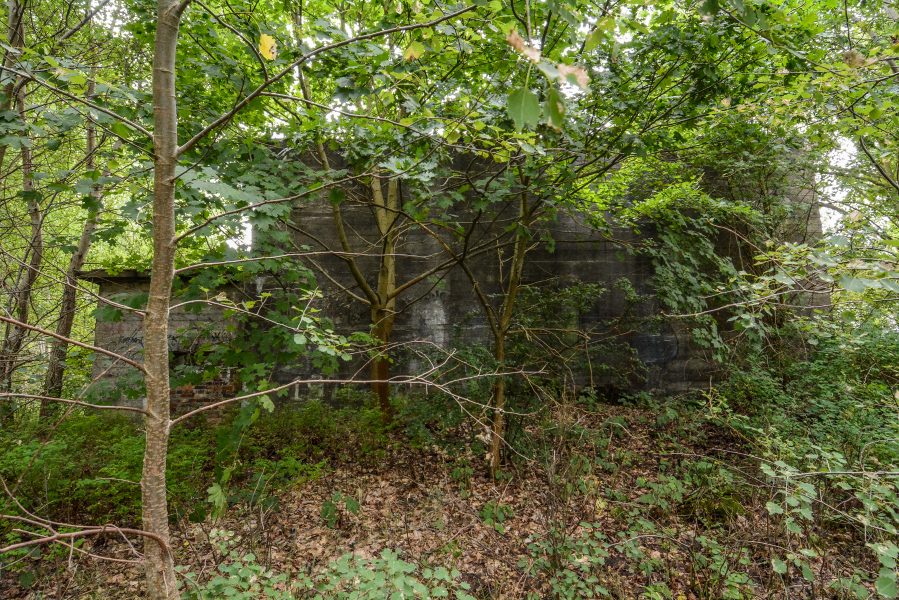 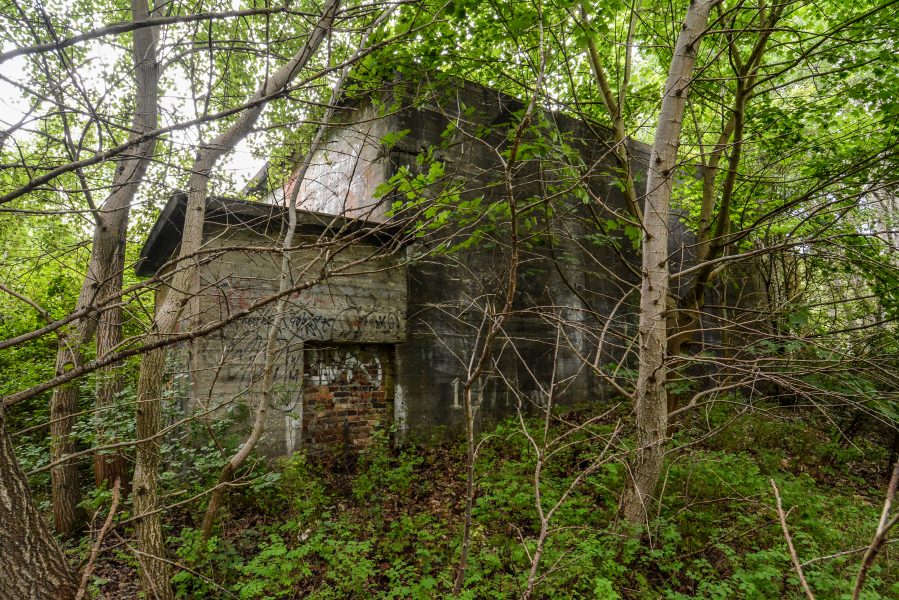 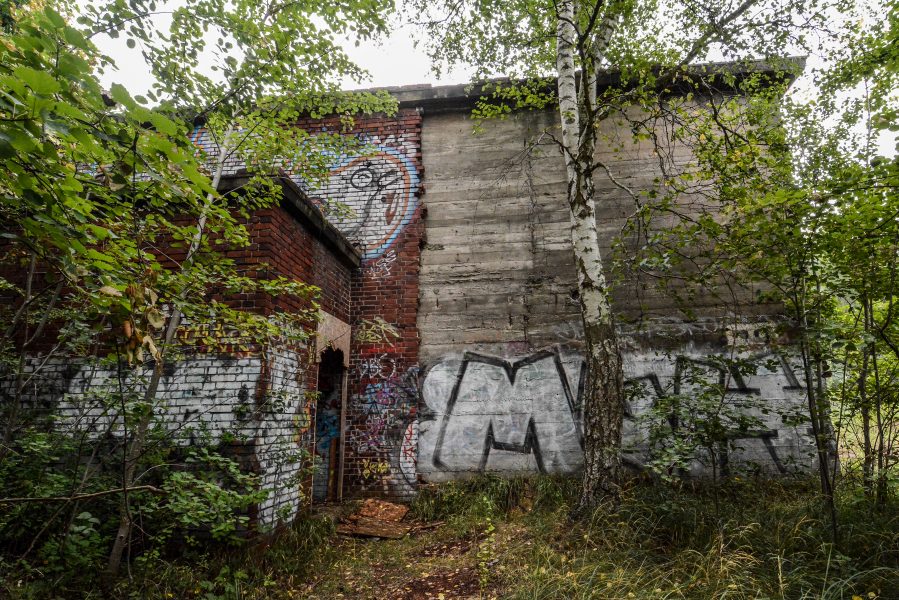 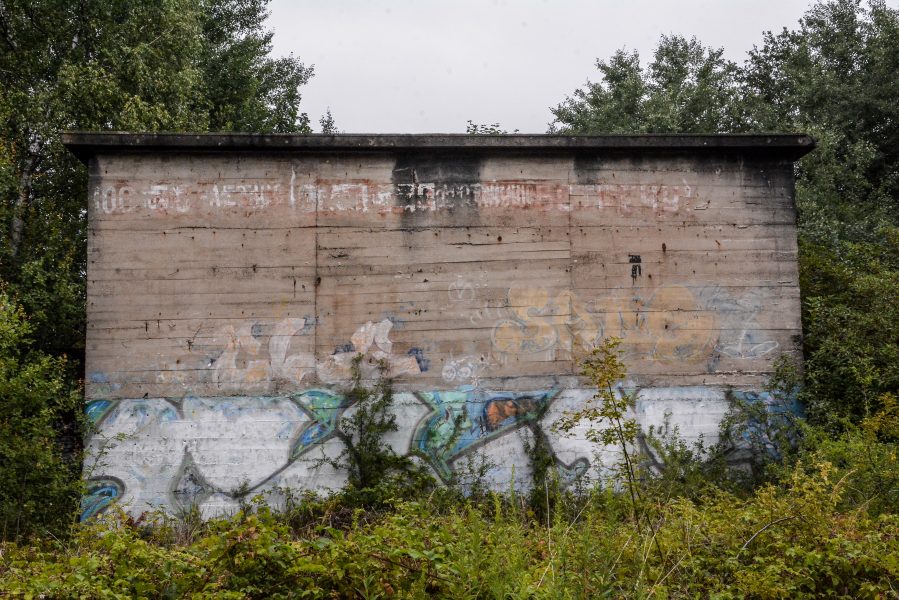 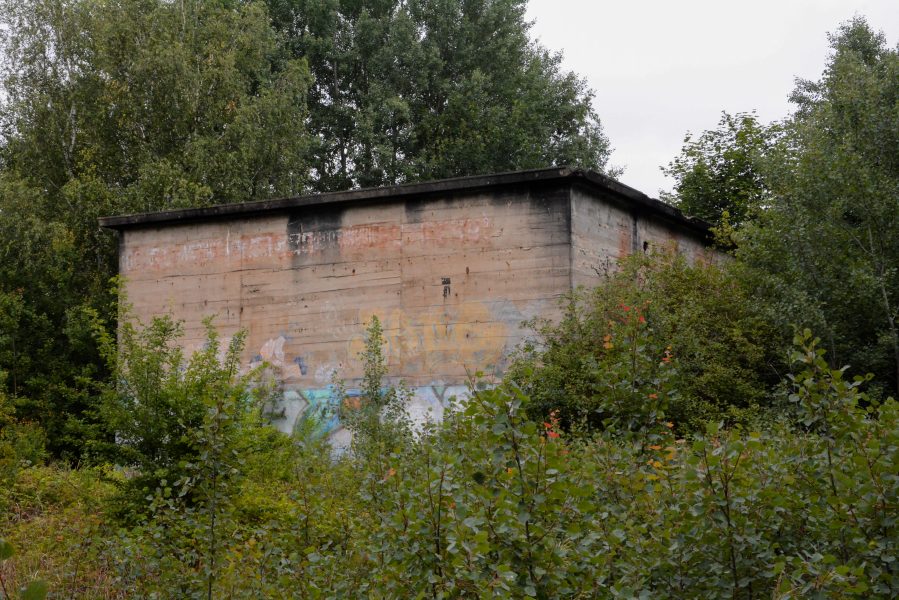 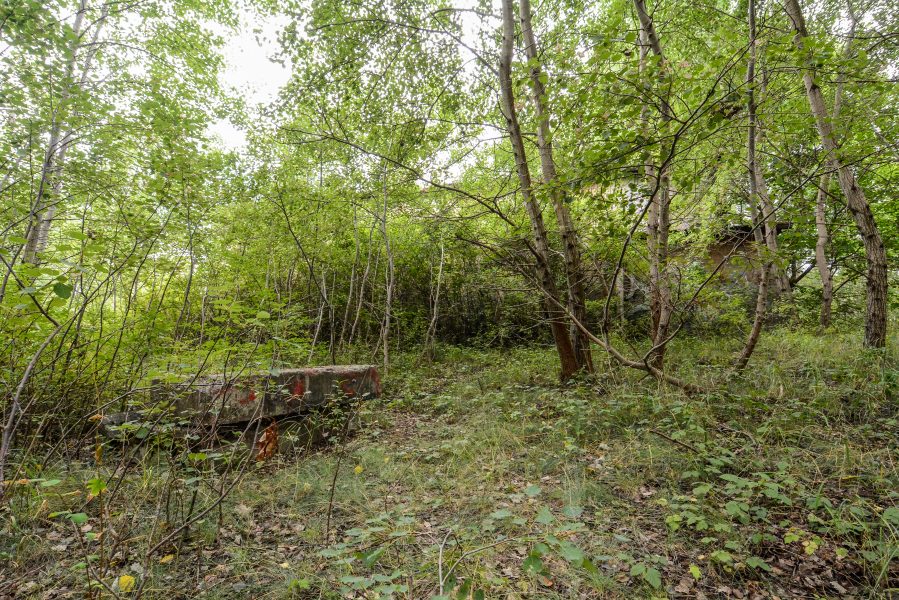 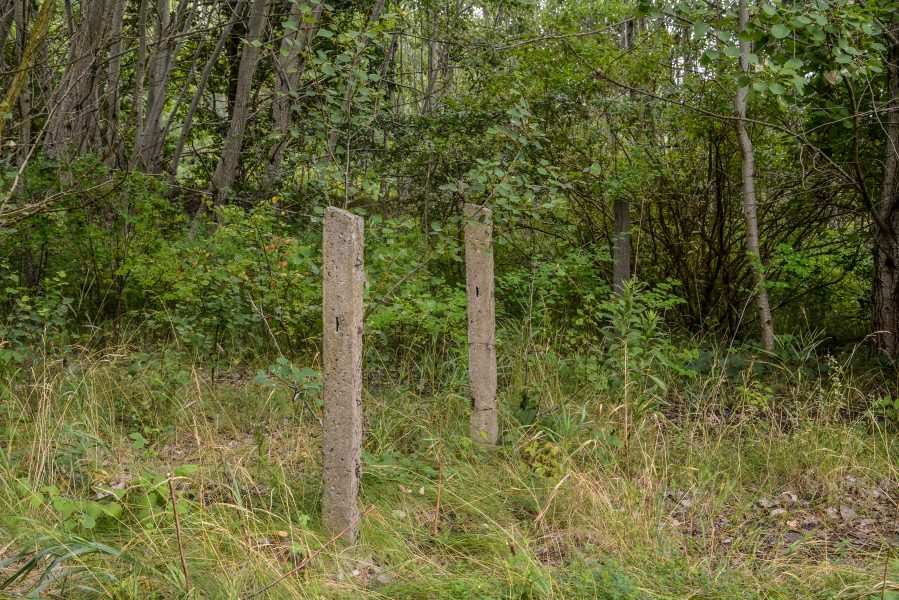 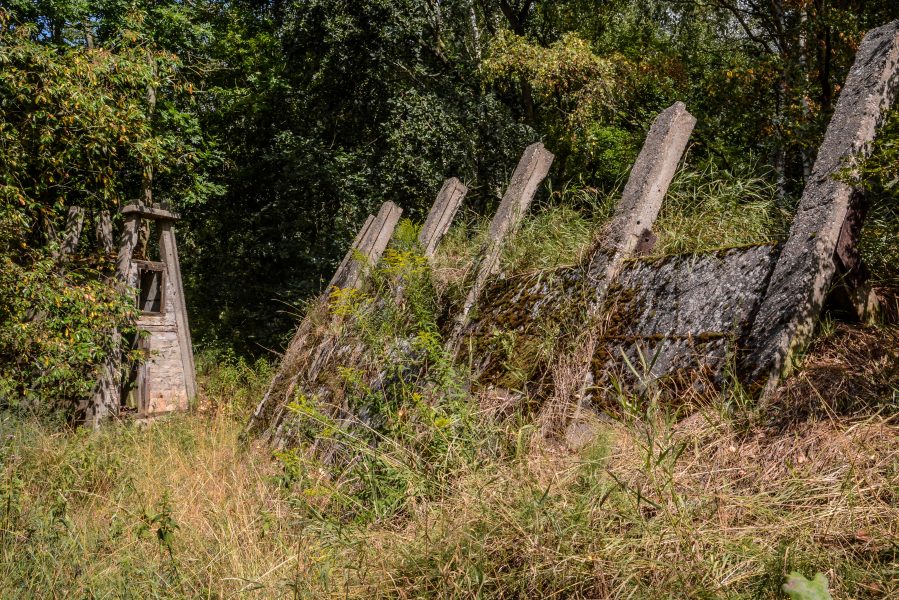 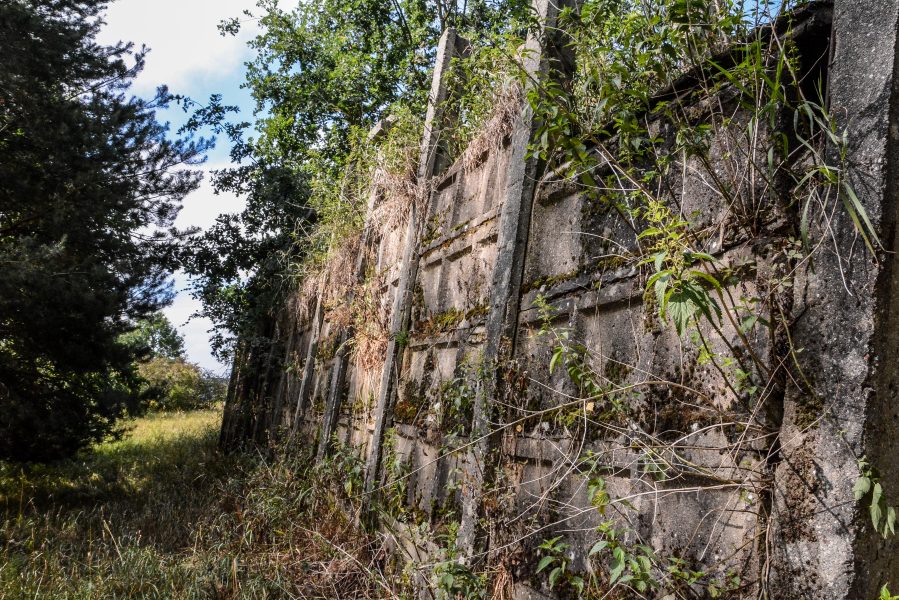 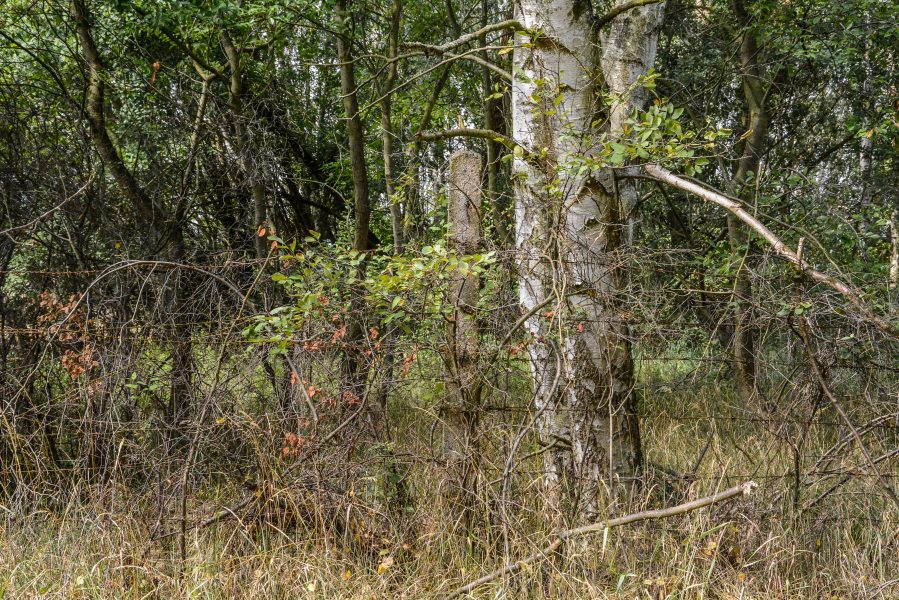