Hidden in a thick overgrowth and a fast growing forest in the northeast of Germany lies one of the last remnants of what Hitlers world capital Germania could have looked like. Hitlers secret city – known as the Weiße Häuser Rechlin – the White Houses, offer a disturbing glimpse into what could have been.

The origins of the Weiße Häuser Rechlin

Unbeknownst to many, an hours drive to the north of Berlin lie the remnants of Germany’s most important (and historic) aeronautical research facility. During the middle of the first World War, the German Ministry of War quickly realised that it needed a central research and testing facility for its Airforce.

The planning for such a facility began in 1916 in Rechlin next to the Müritz lake, but it until 1917 to secure the 1400 hectares ground needed. The war slowed down the development process substantially so it took another year until the “Flieger-Versuchs- und Lehranstalt” (Aviation Testing and Training institute) opened on the 29th of August 1918. By September 1918, plans had been drawn up to build the first reinforced concrete aircraft hangars – but the armistice of November 1918 ended these plans (there are still some left in Berlin- The Flugzeughallen Karlshorst) .

The treaty of Versailles forbade Germany from using or establishing an Airforce, so the need for such a testing and training facility had become moot. In turn, large parts of the facility including train depots and infrastructure were demolished.

The Germans signed the treaty of Rapallo with the Soviet Union in 1922 which normalised diplomatic relation and strengthened economic ties, it also included a secret military cooperation agreement. From 1925 onwards, the Germans operated the secret aviation school (Fliegerschule Stahr” on the outskirts of the Russian city Lipzek, and developed new aircraft and weapon systems.

At the same time, the german government had already set plans in motion to reactivate the closed down test facility in Rechlin. A civil aviation club was formed in Rechlin – the  “Luftfahrverein Waren e.V”, which functioned as a cover up for the government. Throughout the years 1926 to 1933, workshops, aircraft hangars, and living accommodations were built around the area, laying the foundations for the new testing facility (Erprobungsstelle Rechlin).

The Erprobungsstelle Rechlin and the Nazis

After the Nazis came to power in 1933, substantial funds were allocated to further the development of the Erprobungsstelle Rechlin. Technicians and engineers from all around Germany were sent to Rechlin and larger settlements were built to accommodate them and their families.

The Erprobungstelle Rechlin was built up in 4 different sections, each with their own core speciality – Gruppe Nord (Administration, Laboratories), Süd (Motor-testing), Ost (Munitions, Weapons) and West (Technical Company, Barracks). In 1939, engineers tested the Heinkel He 178 – the first jet engine aircraft in Rechlin.

Along with the jet aircraft, the Erpobungstelle Rechlin was also responsible for inventing the autopilot and the ejection seat (amongst many other notable aviation developments). The engineers at the Erprobungstelle Rechlin were also invovled in assisting the Gebrüder Horten and the Gothaer Waggonfabrik in building and testing the Horten H IX, the world first stealth jet (the first real test flight was undertaken at the now abandoned Flugplatz Oranienburg)

The Erprobungstelle Rechlin wasnt just for testing aircraft, but also new weapons technology. It is unclear when exactly – but some time after 1933, German engineers built a “mock city” roughly 7km away from Rechlin in the middle of a forest, known as the Weiße Häuser Rechlin. 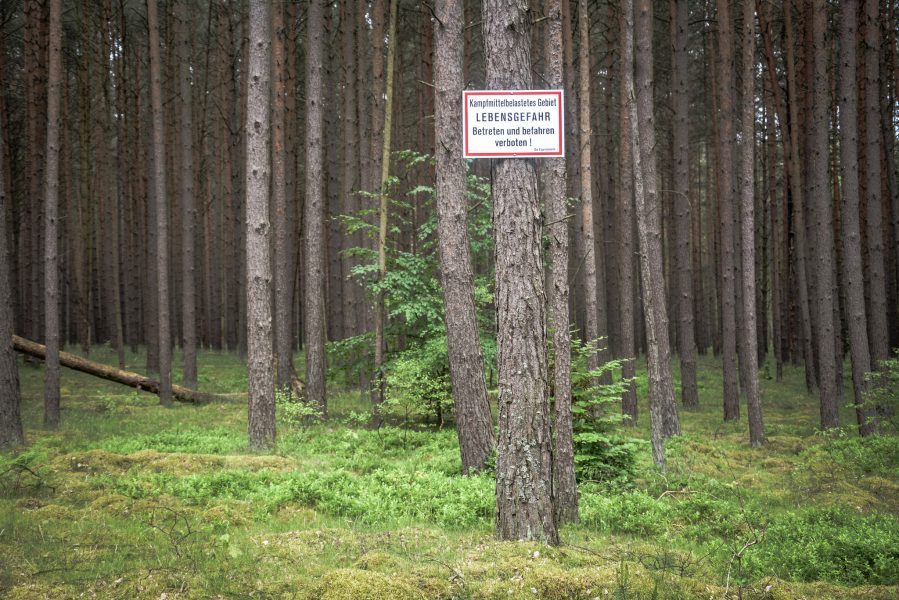 When you venture into the forest you’ll spot dozens of signs that warn any trespassers that you’re risking your life as the ground is still littered with unexploded munitions. A few locals still pass around the story that every now and then you could hear an explosion going off when a deer or a boar takes a wrong step in the undergrowth. 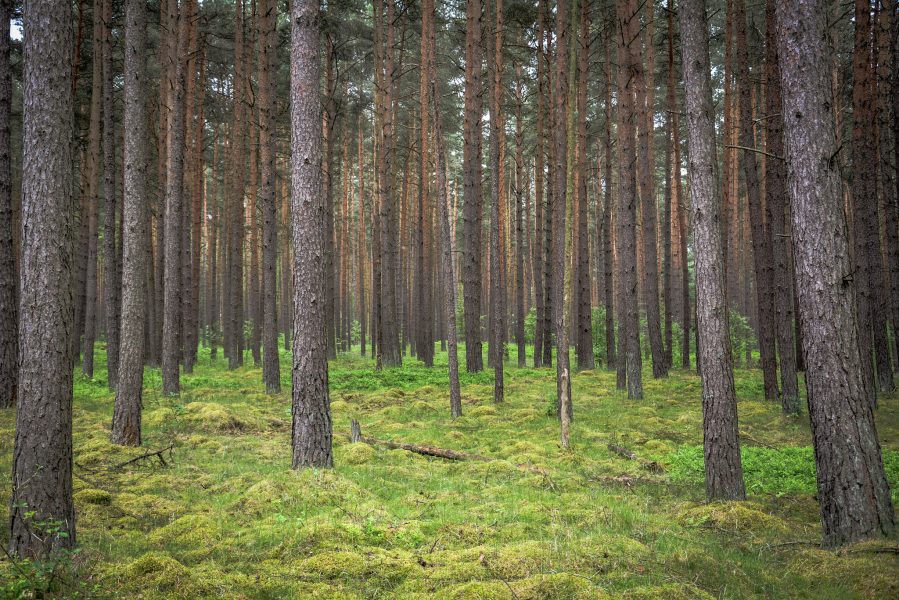 Pushing through the trees and mosquitos, you’re greeted by a 20 meter high tower. And then you spot another one. And another. In total, the Nazis built 4 of these reinforced concrete towers to test the effectiveness of their bombs as well the construction materials and shapes. So where did the name Weiße Häuser Rechlin come from? The Towers were originally built with a white (or very light) brick facade which earned it its name. The crew working for the Luftwaffe section of the Erpobungstelle Rechlin had a different name for it though: Berliner Siedlung. 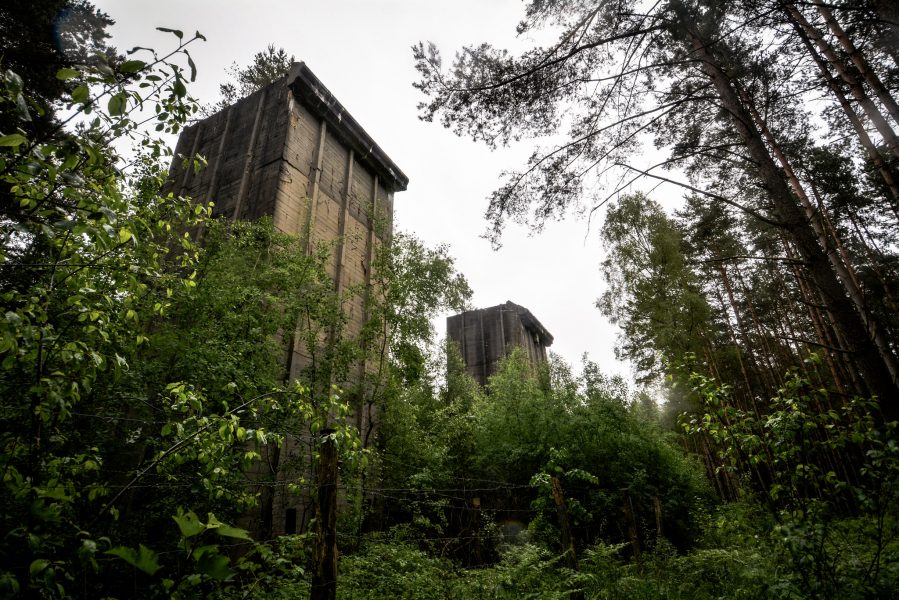 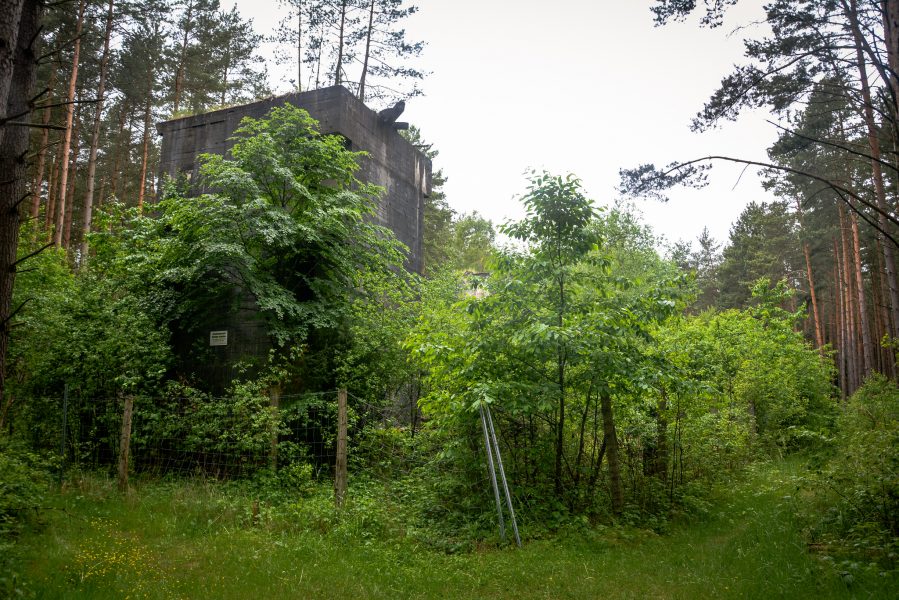 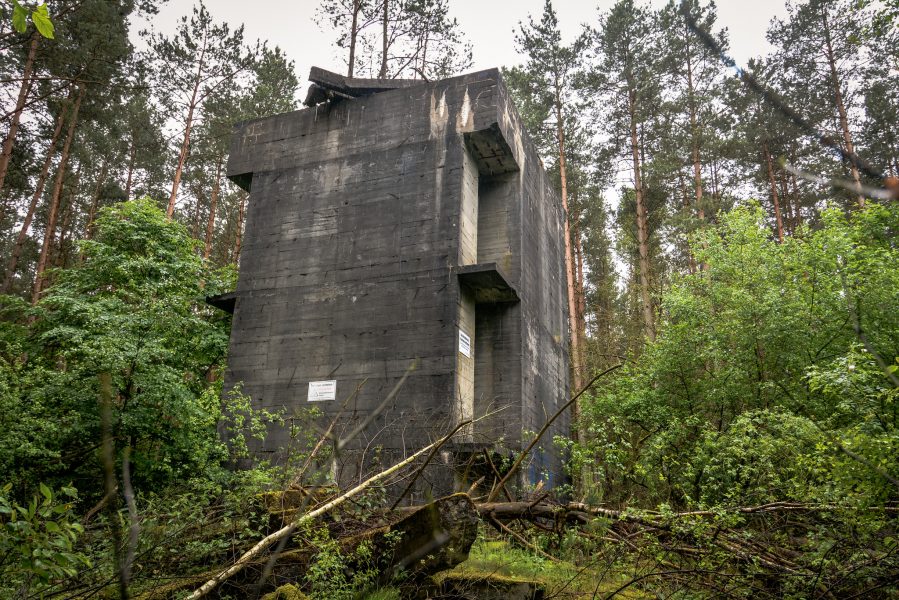 Many rumors still swirl around these towers. Their exact purpose is still somewhat a mystery but one of the most popular theories was that the towers were built as a test for the new Reichshauptstadt Germania. While their small size and inner layout don’t really fit the comfortable house-type (aka it really feels more like a bunker), the outer decorations such as the brick facade, wall decorations and concrete eaves (which do bear a strong resemblance to their historical counterparts in Berlin) do strongly suggest that these were intended to be civilian objects (or at least simulate them).

Some historians apparently have found architectural similarities between the facades of the Berliner Siedlung and buildings in Albert Speers plans – but there is no certainty to this. It does certainly sound plausible that the Nazis had planned to build bomb proof housing for the capital Germania. The Nazis also built a 300 meter long stretch of the Autobahn not far from the towers, quite possible for the same reason as the towers. Sadly we weren’t able to find any traces of it as the forest had grown so thick over everything. 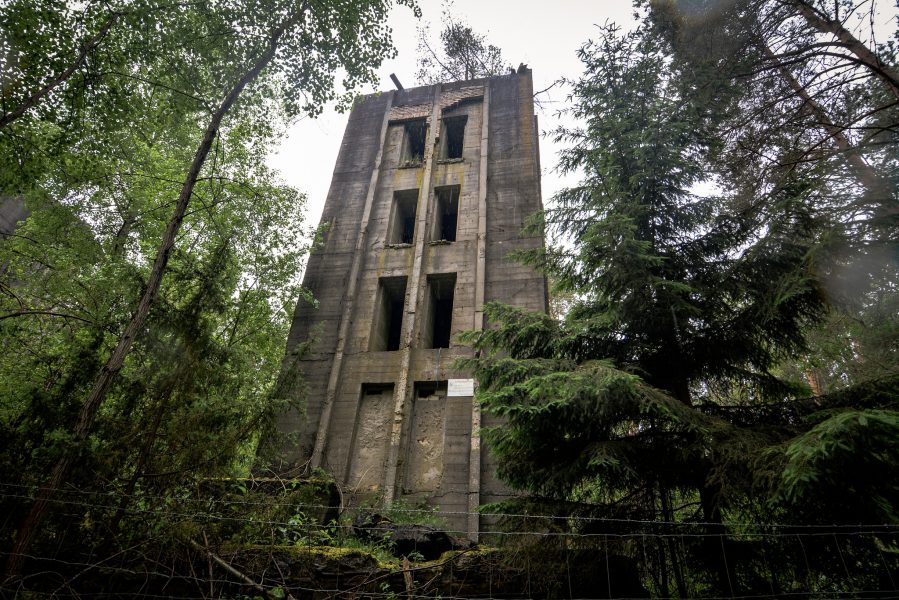 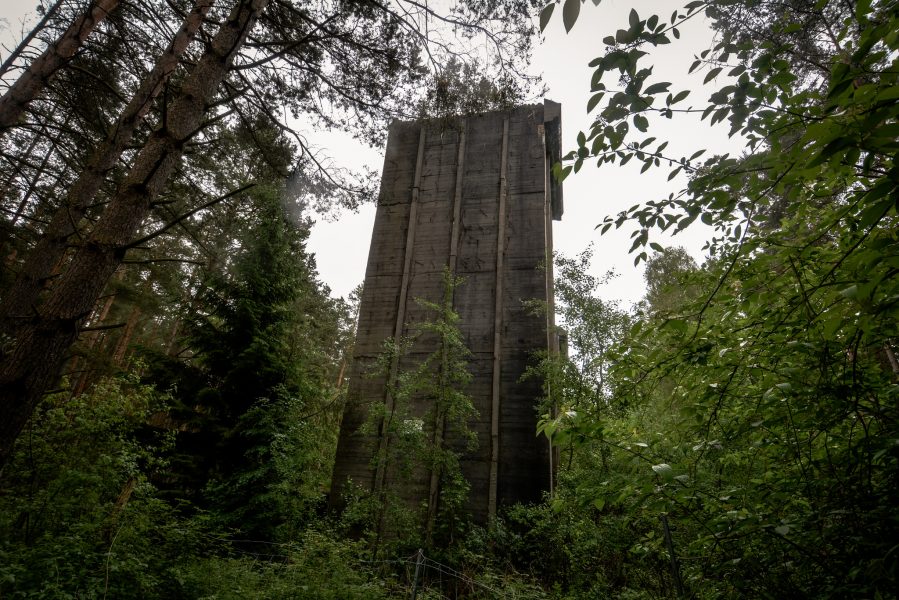 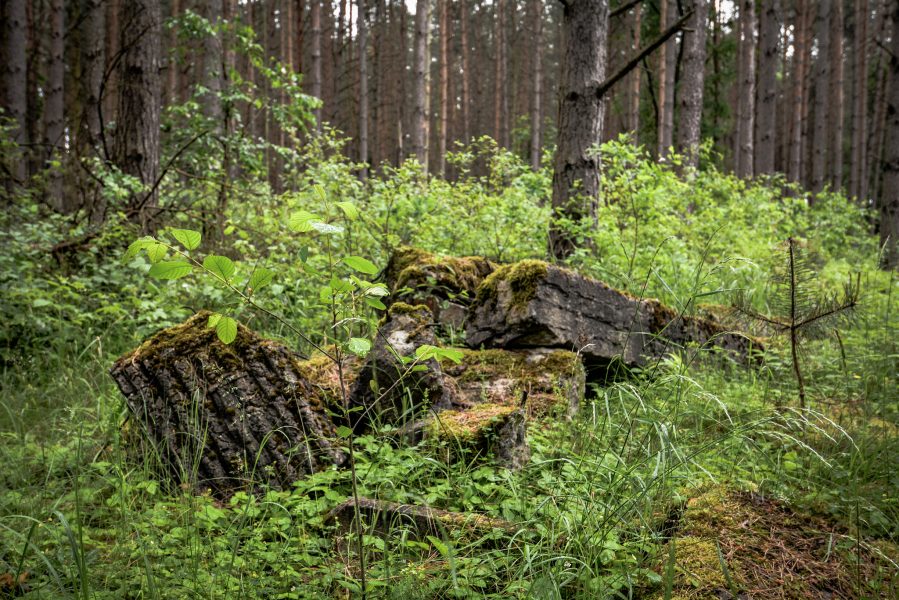 Another theory is that the towers in Rechlin were built to simulate an urban setting and to test the accuracy and effectiveness of the newly developer weapons technology. This isn’t too far of an outlandish theory – especially considering that the Americans did just this in 1943 to perfect their firebombing campaigns.

Not far from the abandoned towers lies another curiosity. A large reinforced concrete plate with a massive blast hole in the middle peeling the concrete apart, seemingly frozen in time. The story behind the concrete plate is apparently as follows:

The weapons manufacturer Rheinmetall developed a bombardment method with the so-called “Körperwerfer” to determine the penetrative force of explosive bombs. The device consisted of a smooth cannon tube with an approximate caliber of 38cm, From a distance of 100 meters, a 250kg blockbuster bomb and a Panzersprengbombe PC500 were fired at  perpendicular placed reinforced concrete walls and armor plates. 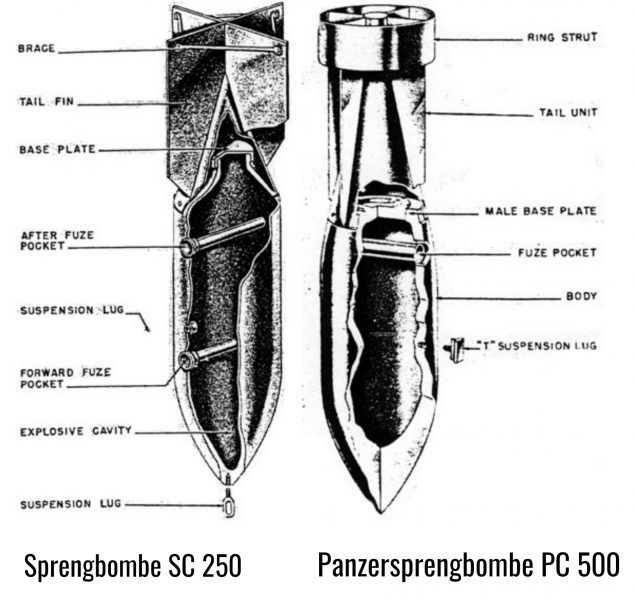 This setup was tested with about 20 shots at Rheinmetalls location in Unterlüß (which they still use today), and was supposed to be replicated again in July 1939 for Hitler in at the Weiße Häuser Rechlin. Apparently the demonstration didn’t go as planned as they had used 10mm reinforcement instead of 8mm, which failed to showcase the penetrative and explosive force which the engineers wanted to demonstrate. 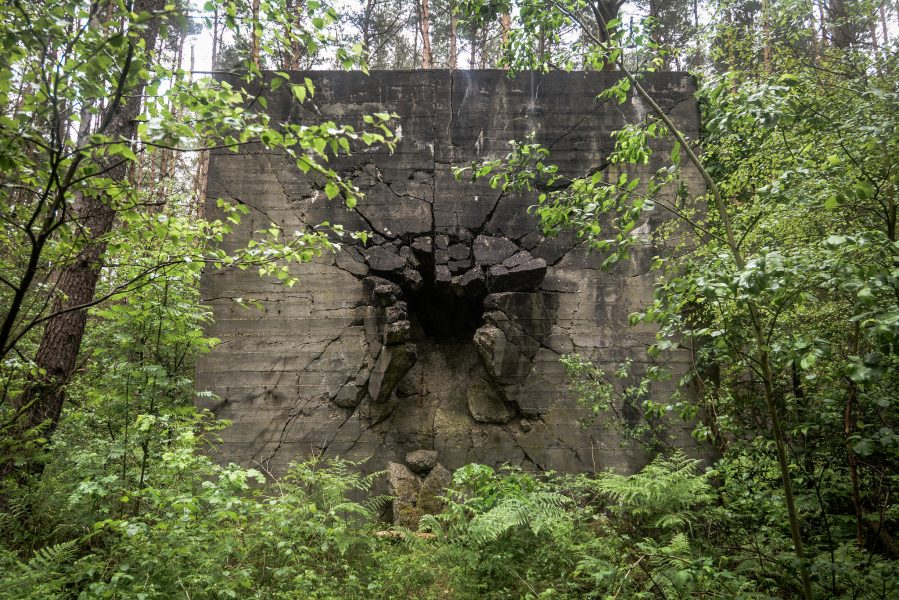 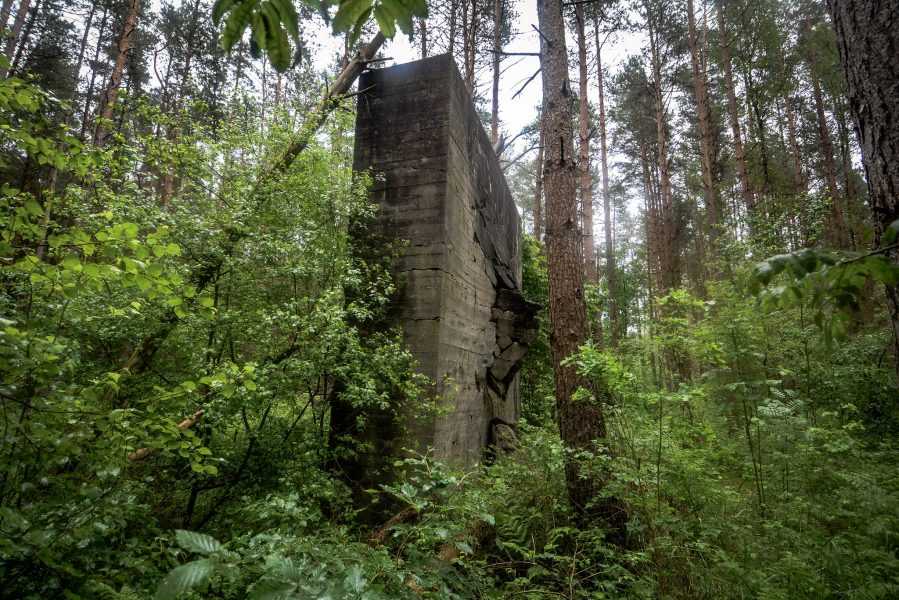 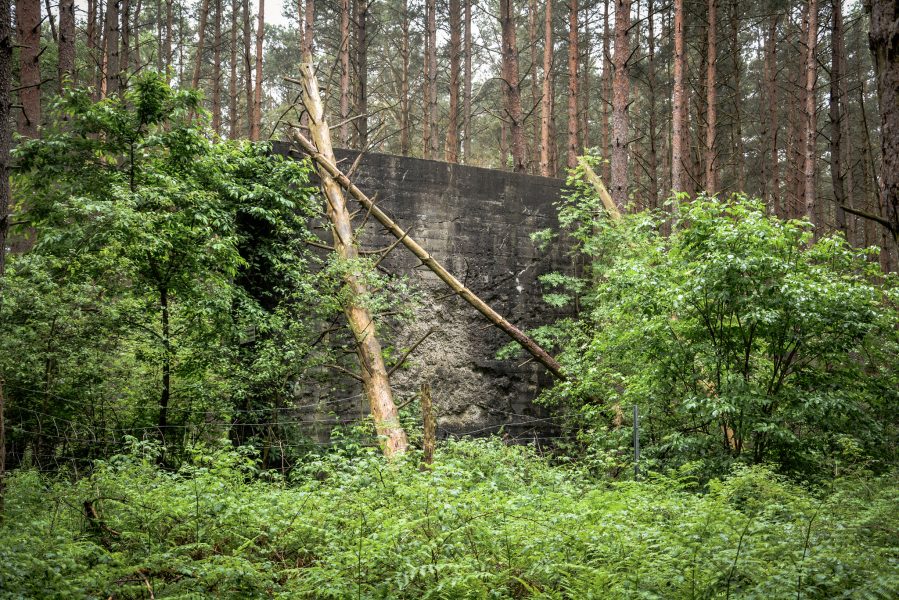 Rechlin and the Weiße Häuser never really became a target of the US bombing campaigns until may 1944 – and only as a secondary target. Another bombing run in August 1944 damaged the facility, but it continued operating until April 1945, when a final bombing run shut down the facility.

At the end of April 1945, the germans destroyed the technical facilities before surrendering the Erpobungsstelle Rechlin to the Red Army on the 2nd of May 1945. After the war, so the rumor goes, the local populace decided to scavenge what building materials they could find and picked away the brick facade which one gave this place its name. 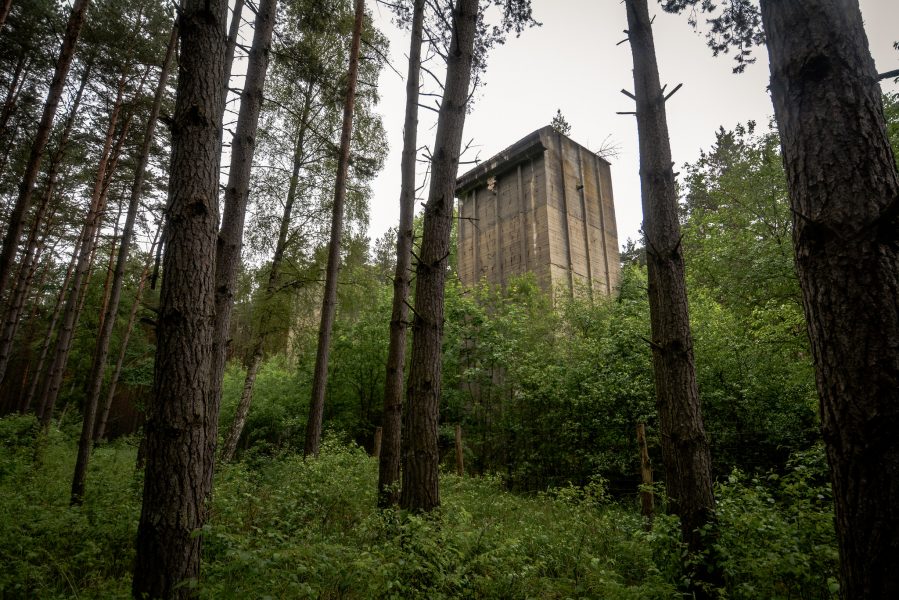 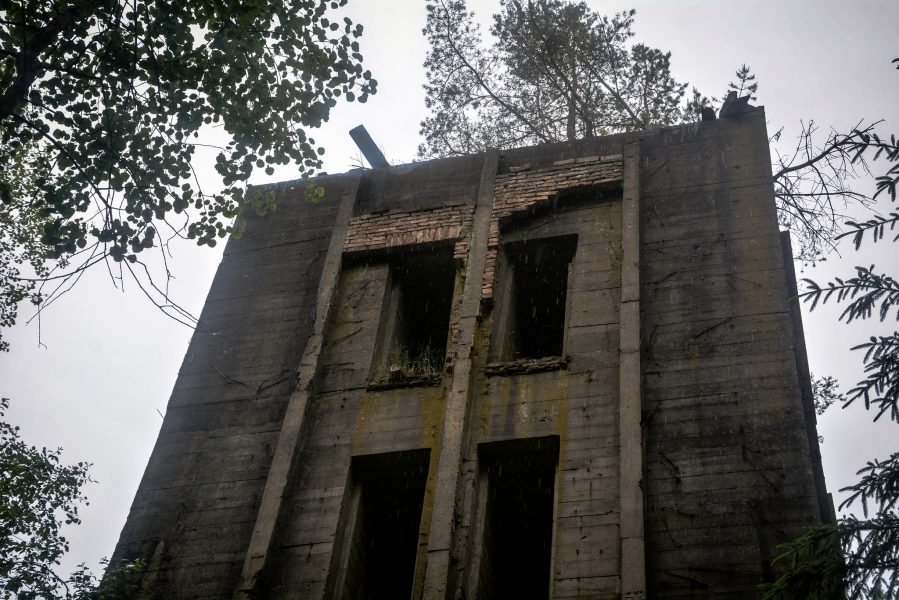 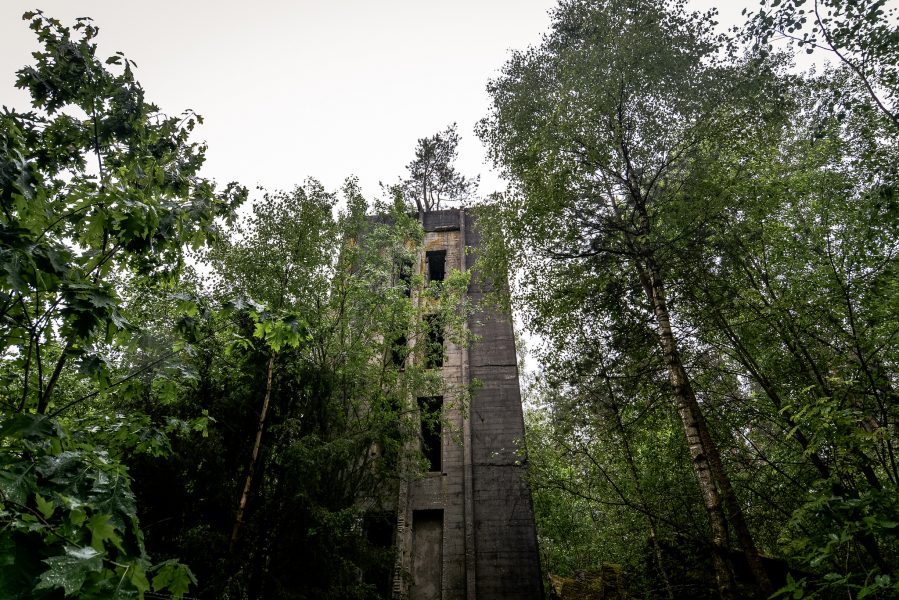 The Soviet forces used Rechlin as a military base up until 1993. Parts of the area were used by the German Bundeswehr after the German reunification, but were soon given up again. One of the airstrips – the Flugplatz Lärz was handed back to civilian use after the Russian bombers were ordered back home. While parts of the former military installation have either been torn down, or been given back to the civilian population, other segments are rotting away in the forest.

Some curious folk had been drawn into venturing up into the Weiße Häuser Rechlin themselves – but ever since one foolish visitor slipped and fell – some of the entrances have been close off and a rudimentary fence has been put up. One should take the warning signs very seriously as there are still massive bomb craters visible throughout the forest – and the towers do not look very safe. 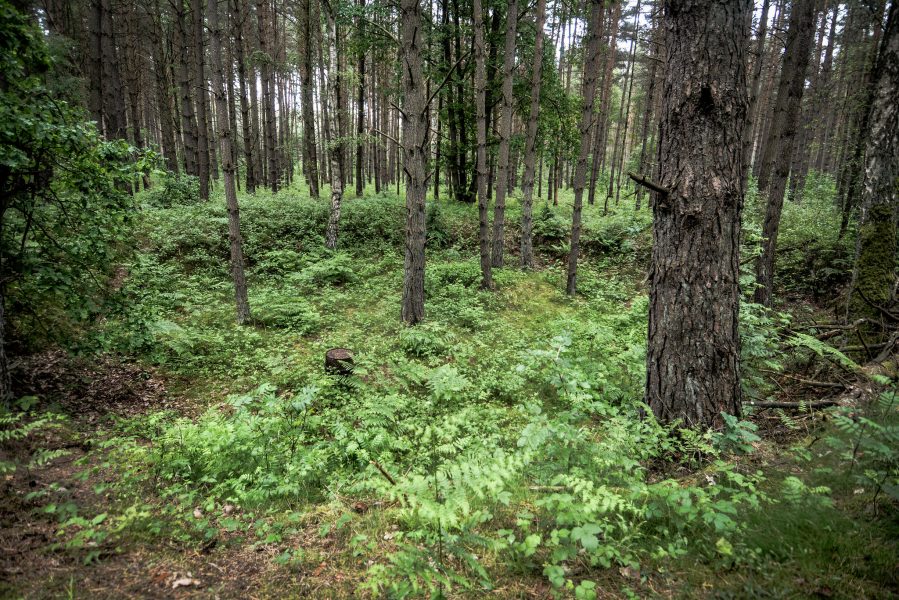 The pine forests are quickly reclaiming whats theirs, covering most traces of the Nazis built. Rumors have been circulating around for a few years that the Berliner Siedlung / Weiße Häuser Rechlin would be torn down, but for now it seems like the towers will remain a silent and soon hidden testament to the folly of war.

For those that would like to see more photos of the Weiße Häuser – feel free to click-through to the Flickr album.

*While I do try my best to be as accurate as possible when it comes to researching and writing these things, inaccuracies or wrong sources do crop up from time to time. If you do have any additional info or spot a mistake, let me know in the comments.