Every Kiez in Berlin has one or two buildings which define the area – be it the Fernsehturm in Mitte, the Karstadt Building in Neukölln, The Kaiser-Wilhelm-Gedächtniskirche in Charlottenburg or the Dong Xuan Center in Lichtenberg. No other building exemplifies Prenzlauer Berg like the Wasserturm – which has stood in the heart of the kiez for over 140 years.

The origins of the Wasserturm in Prenzlauer Berg

The origins of Prenzlauer Berg (and the Wasserturm) as we know it today date back to to the year 1827. It was around this time that the Berlin Magistrate developed a construction plan for the area outside of the city walls, as Berlin was running out of space within its small boundaries.

It was James Hobrecht though who can be seen as the father of Prenzlauer Berg – as he had developed the Hobrecht-Plan in 1859 – 1862 which sought out the planning and development of the unused land in Berlin, Charlottenburg as well as the municipalities of Reinickendorf, Weißensee, Lichtenberg, Rixdorf and Wilmersdorf – which ultimately led to the creation of Prenzlauer Berg.

Berlin was the last major European city to build a central water supply in 1852. The city had plenty of wells (5600 to be exact) to supply its residents with water, so the introduction of new water system was seen with extreme skepticism, with even the magistrate being against the idea. The well water was prone to contamination with cholera, often without the the residents even knowing – so the city eventually saw that they needed an alternative.

The english engineers and businessmen Sir Charles Fox and Sir Thomas Russel Crampton received the mandate to supply the city with water for 25 years (but they weren’t tasked with responsibility of removing the sewage). They formed the Berlin Waterworks Company, hired the engineer Henry Gill and set to task building the first waterworks at the Stralauer Tor (known today as the U-Bahn Station Osthafen) on the 1st of July 1856. A year later 314 houses were connected to the water system. 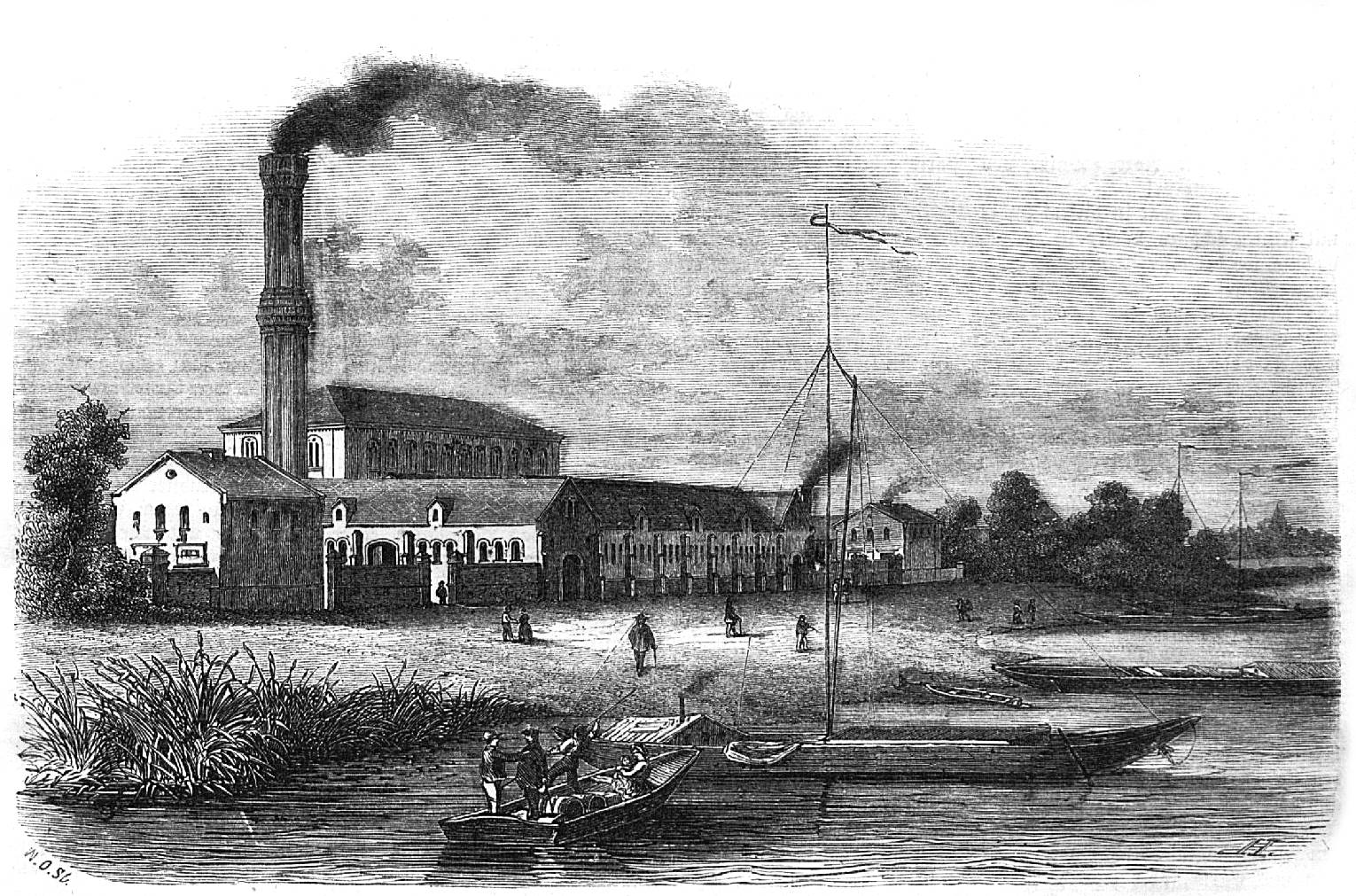 The filtered water was pumped throughout the city – and one of the locations was the open water reservoir on the Windmühlenberg (Windmill Hill) with a capacity of  3000m3.  The name of the hill derives from the fact that it used to be populated with 8 windmills (Prenzlauer Berg had over 30 mills at its peak – today Berlin only has 8 surviving Windmills).

If you’ve ever wondered: What is that thin tower is next to the water tower in Prenzlauer Berg? Its called a Steigrohrturm (often mislabeled as Standrohrturm) – a supply line tower. The 20 meter high Steigrohrturm in Prenzaluer Berg was used to indicate and balance the water pressure as well as acting as a safety valve. 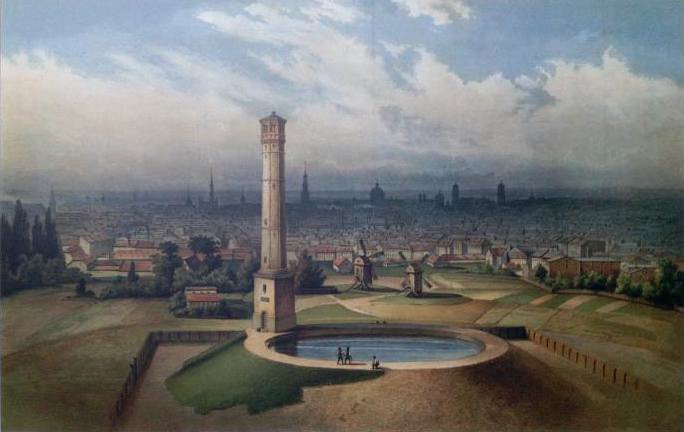 The waterworks at Stralauer Tor wasn’t enough to supply the demand by 1869 and had to be extended, though the negotiations to extend the network and the contract failed. The Magistrate wanted to take over the waterworks to implement the Hobrecht-Plan and it wanted to build a sewage system to stem the cholera epidemic.

The city of Berlin bought the waterworks in 1873 once the contract with Fox and Crampton ended, handing over the reigns to build a sewage system to Rudolf Virchow (if the name sounds familiar – a campus of the Charite is named after him). By 1909 the entire 1209KM long system was complete. At some point before the turn of the century the large water reservoir was closed off for hygienic reasons. 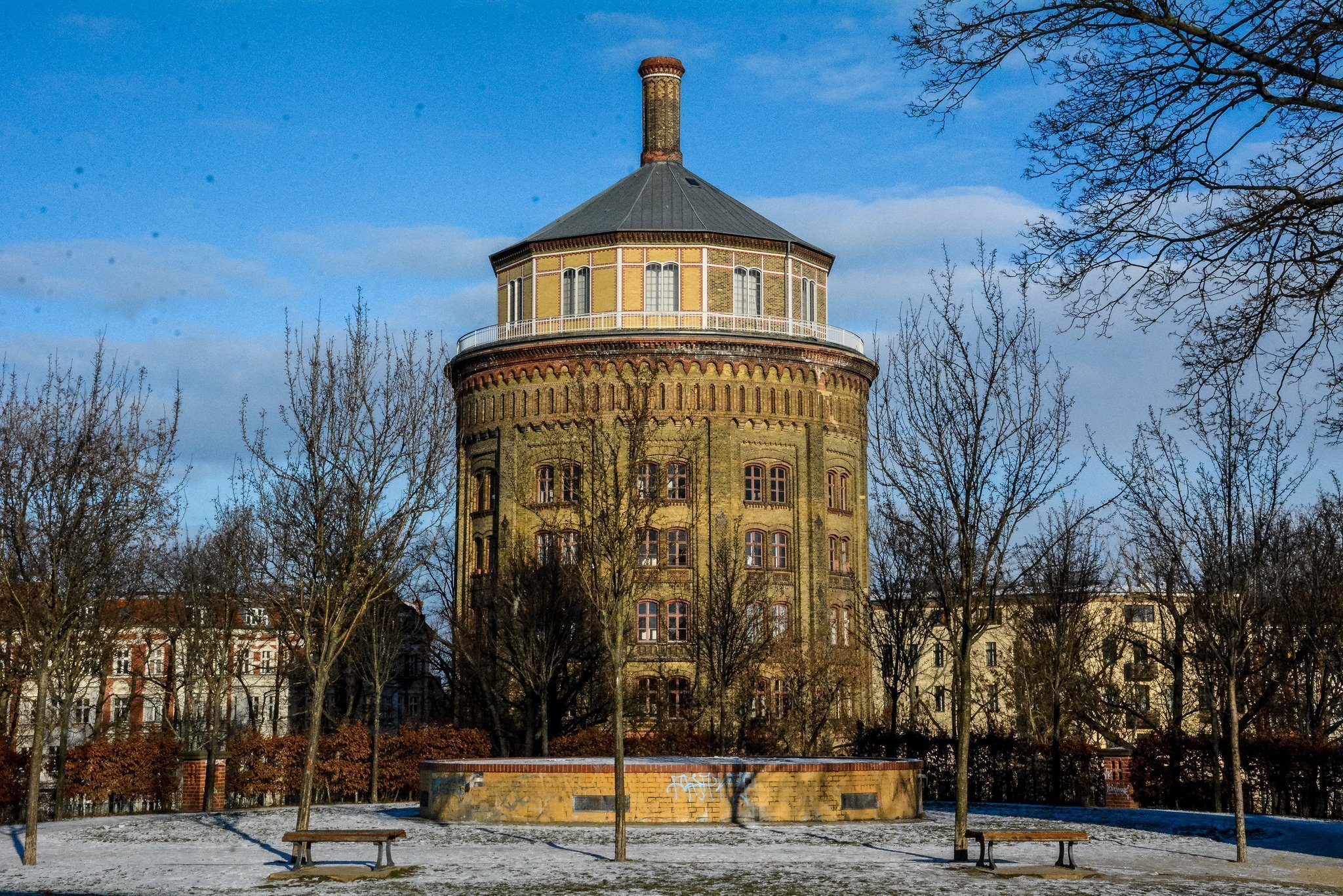 The Water Tower in Prenzlauer Berg – an iconic emblem

By 1871, Berlin experienced a building and population boom – which in turn increased the demand for more water and water pressure.  The city needed another Wasserturm, so they hired Wilhelm Vollhering to design a new one. The outcome was the “Dicker Herrmann”  – “Fat Herrmann” – a 30 meter high water tower above an elevated reservoir holding 1200 cubic meters of filtered groundwater, and 2 engine rooms.

The Water tower in Prenzlauer Berg had a unique feature: from the beginning the tower was built with apartments for its workers. Many people believe they were added in later after it was functionally shut down, but they’ve been there from the start. Another interesting quirk, as the tower belongs to the city, the apartments are available to the public, but the waiting lists are so long that you wont be able to move in your lifetime. The new Wasserturm, together with the engine rooms, the old Steigrohrturm and the water reservoirs now supplied the entire northern section of Berlin.

The water network and its technology had progressed rapidly in the next few years that by 1914, the steigrohrturm and the machine houses were decommissioned. By 1920 the water tower in Prenzlauer Berg had officially become the symbol of Prenzlauer Berg when it was included to be part of the districts emblem. It was actually the districts emblem twice – from 1920 to 1987, and from 1987 until 1992.

Now it wouldn’t be Germany if the story went a bit dark. When the Nazis came to power early in 1933, the SA turned the old machine rooms of the water tower into one of the first concentration camps in Germany – the “SA-Heim Wasserturm”. Prenzlauer Berg was a politically radical neighbourhood, with a strong presence of fascists and communists alike.

Witnesses recounted that they could hear the torturous screams echo throughout the streets. Its central location was meant to instil fear into any and all opposition. The Nazis decided to close the camp and tear down the machine rooms by 1935, removing all traces of their crimes. By 1937, a playground and park had replaced the camp. Today, a memorial is located in front of the tower for all to remember what happened here. 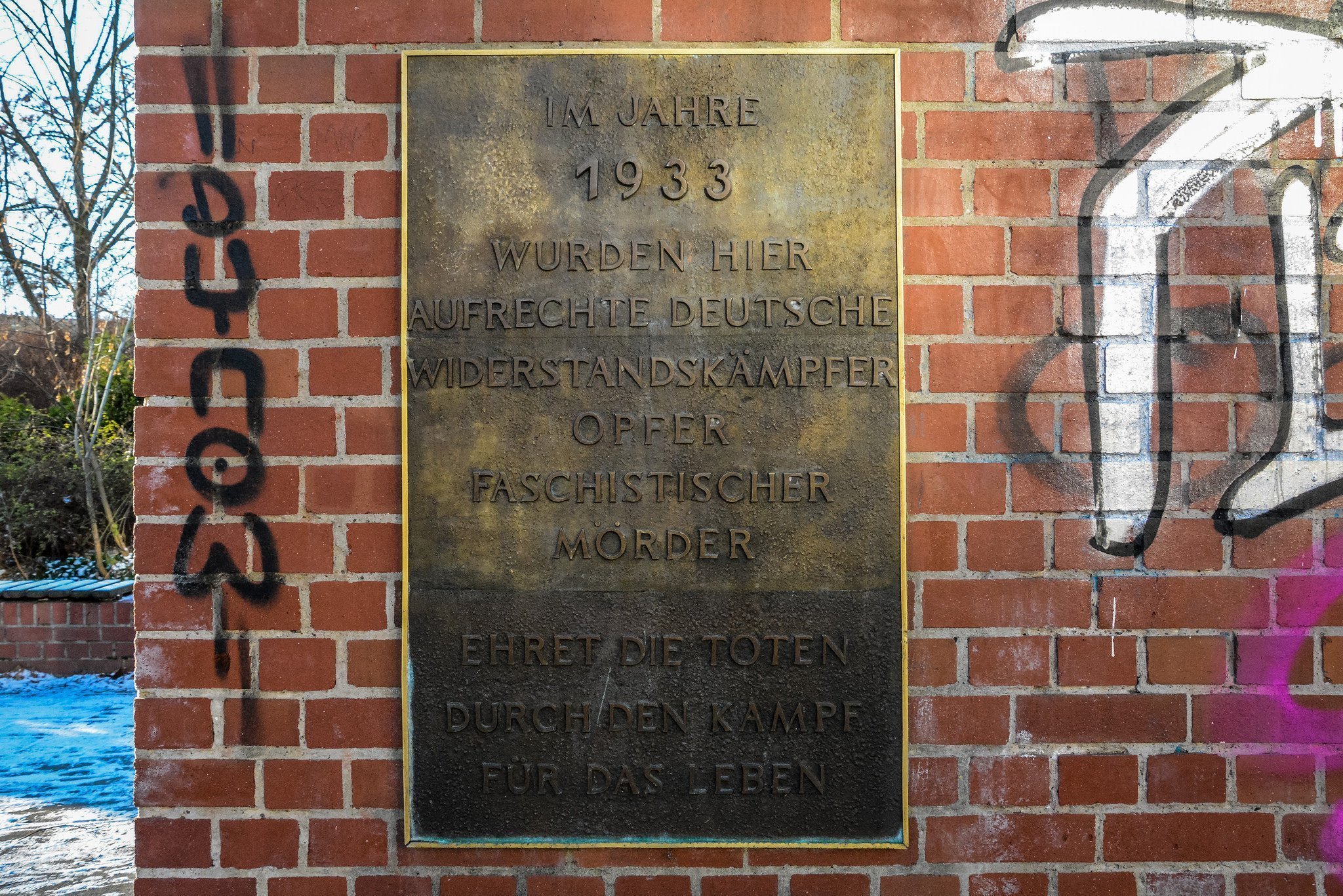 The Wasserturm after the war and today

The Wasserturm was used up until 1952 to regulate the districts water pressure, but then rapidly decommissioned – though the apartments in the tower remained. By 1991 the Water Tower had been declared a listed monument and park, and years of painstaking restoration begun.

The city tried to recreate as faithfully as possible the look and feel of the park around the Water Tower, moving literally tons and tons of earth. The smallest of the 3 towers that you can see today is actually the entrance to the larger water reservoir underneath, and a “fake” – as its a faithful reproduction of the original entrance built when the area around the tower was renovated. 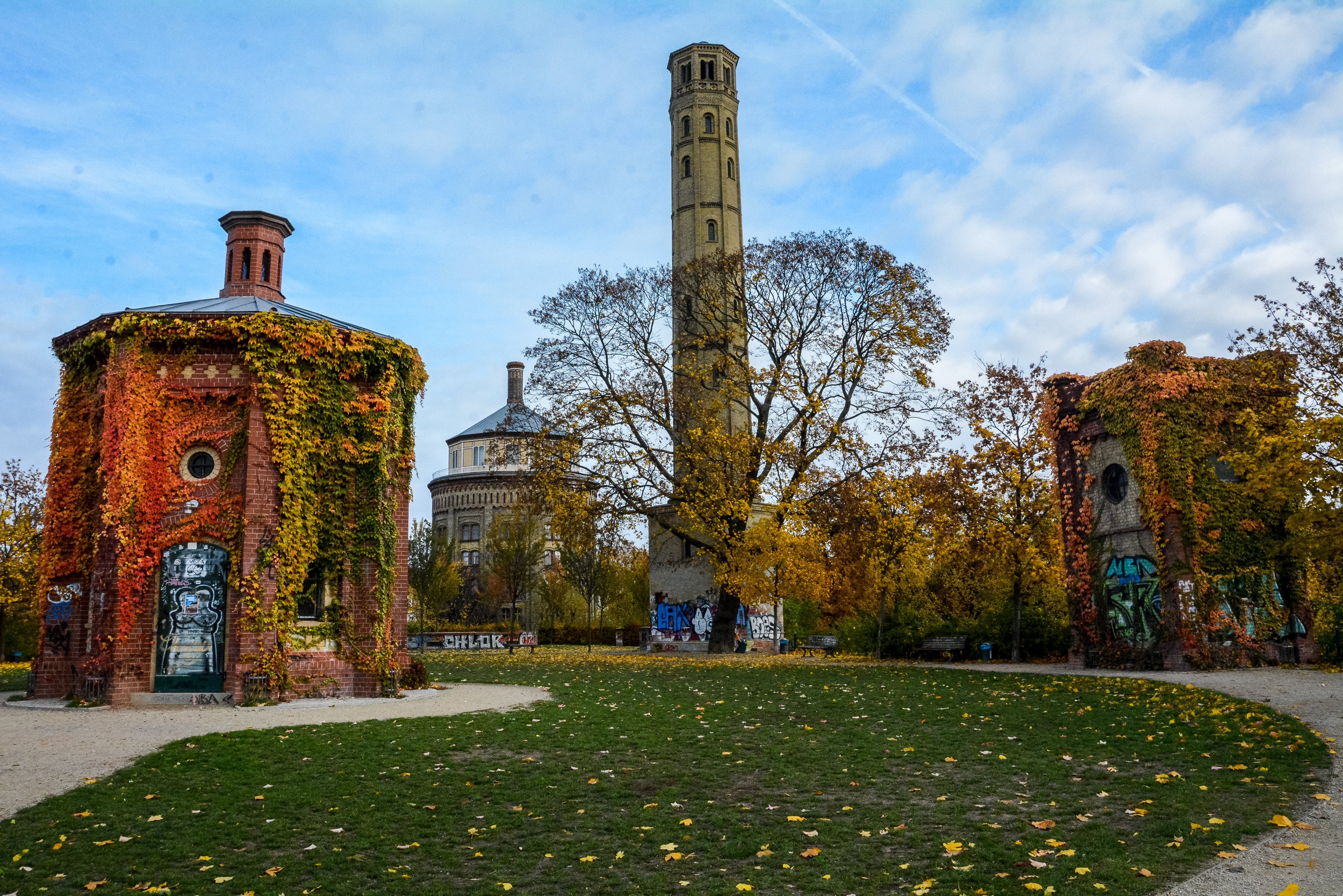 A kindergarten and playground have been added to water tower  as well. If you take a stroll around the lower level, you’ll notice a small water fountain, a lion and 2 cubs. This is actually an homage to a lion fountain that the Berlin Water Works placed there – which went missing during the war. After the water reservoirs beneath the streets of Prenzlauer Berg were shut down, they’ve seen many uses, from storage facilities of a local fish monger to hosting of art installations and concerts. 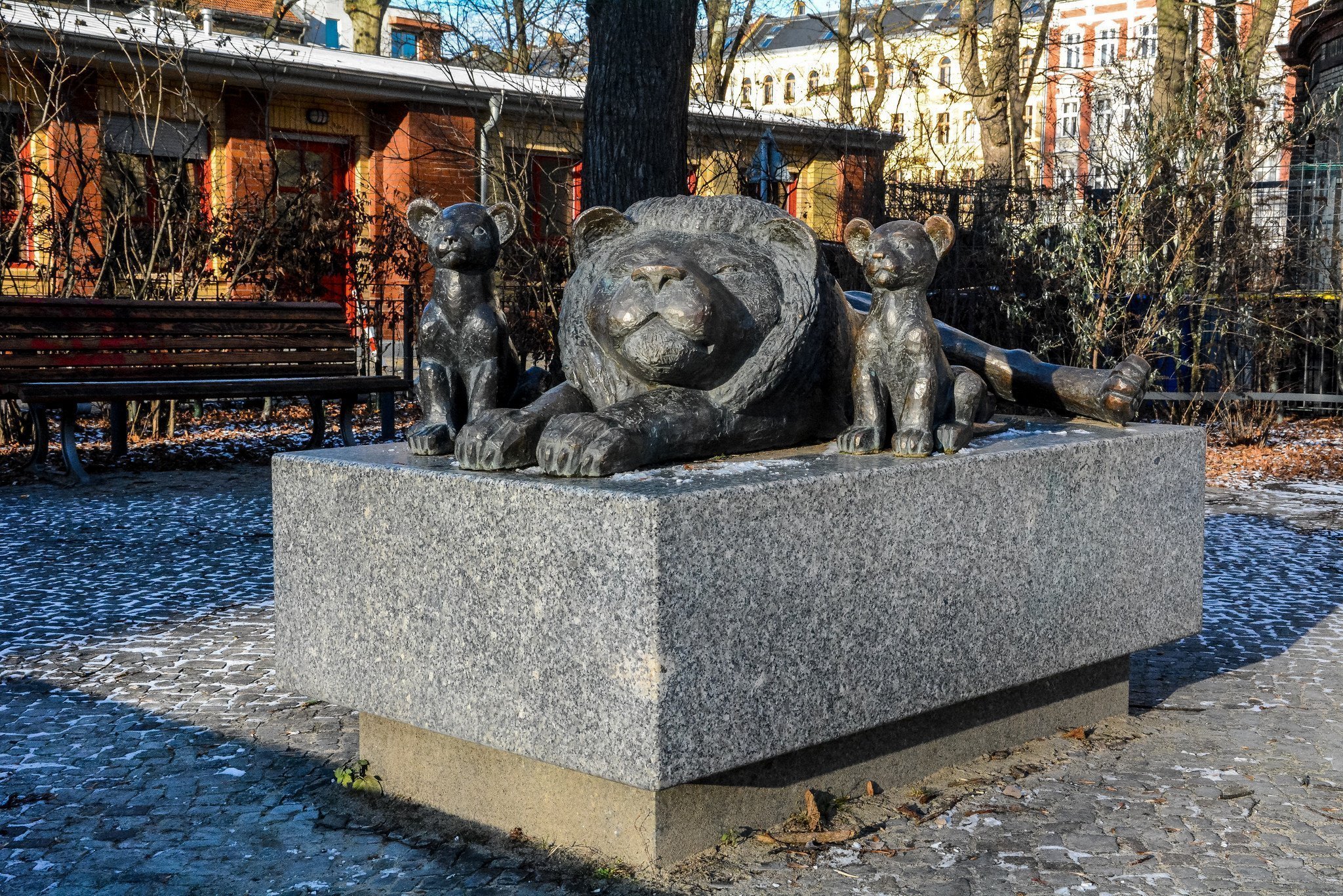 Though they are not permanently open to the public, one can gain access to them either by visiting one of the infrequent art installations that happen every odd year or so, or by taking part of the very highly recommended tours by the Förderverein “Weingarten Berlin” e.V. They are a great organization who take care of the Wine growing on the hills of the Water Tower and do an excellent tour at a very affordable 5 euros. Check out their website for more information.

The Water Tower today is still the heart of Prenzlauer Berg – its elevated park offers a majestic view across the city and serves as the perfect hangout spot in the summer and invites for leisurely strolls in the winter. If you do ever have the opportunity to tour the underground cisterns, its well worth the experience as the photos bellow show. 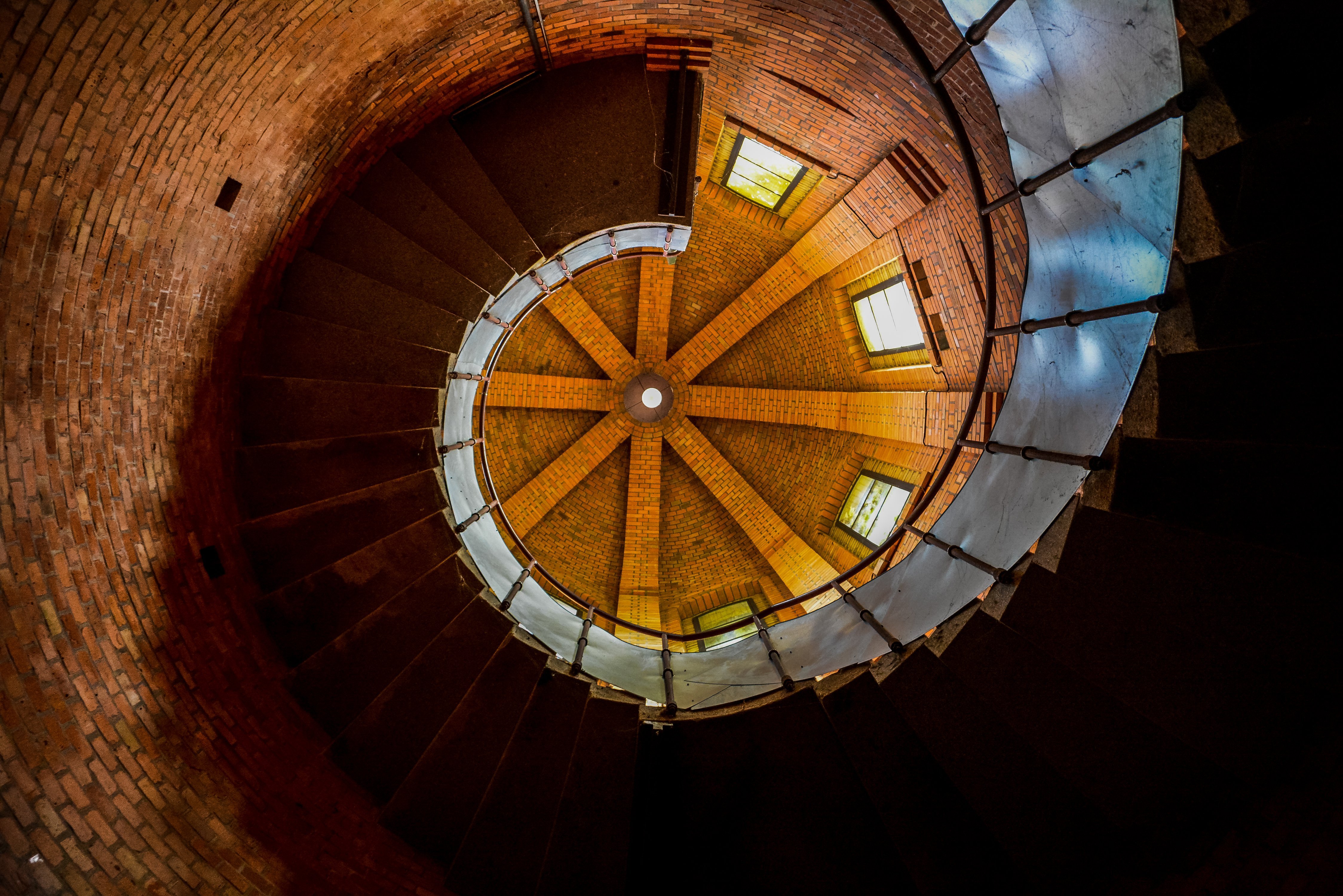 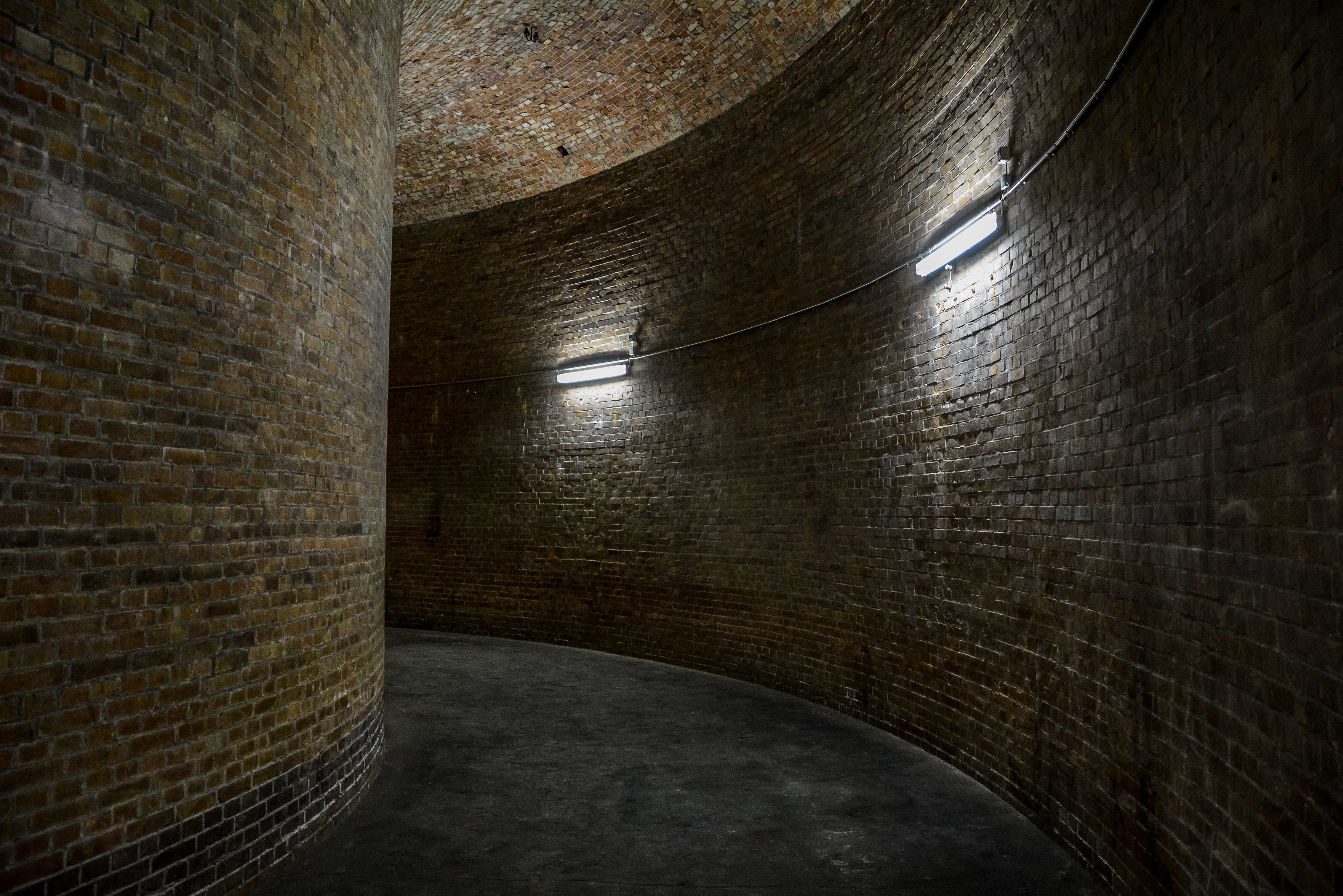 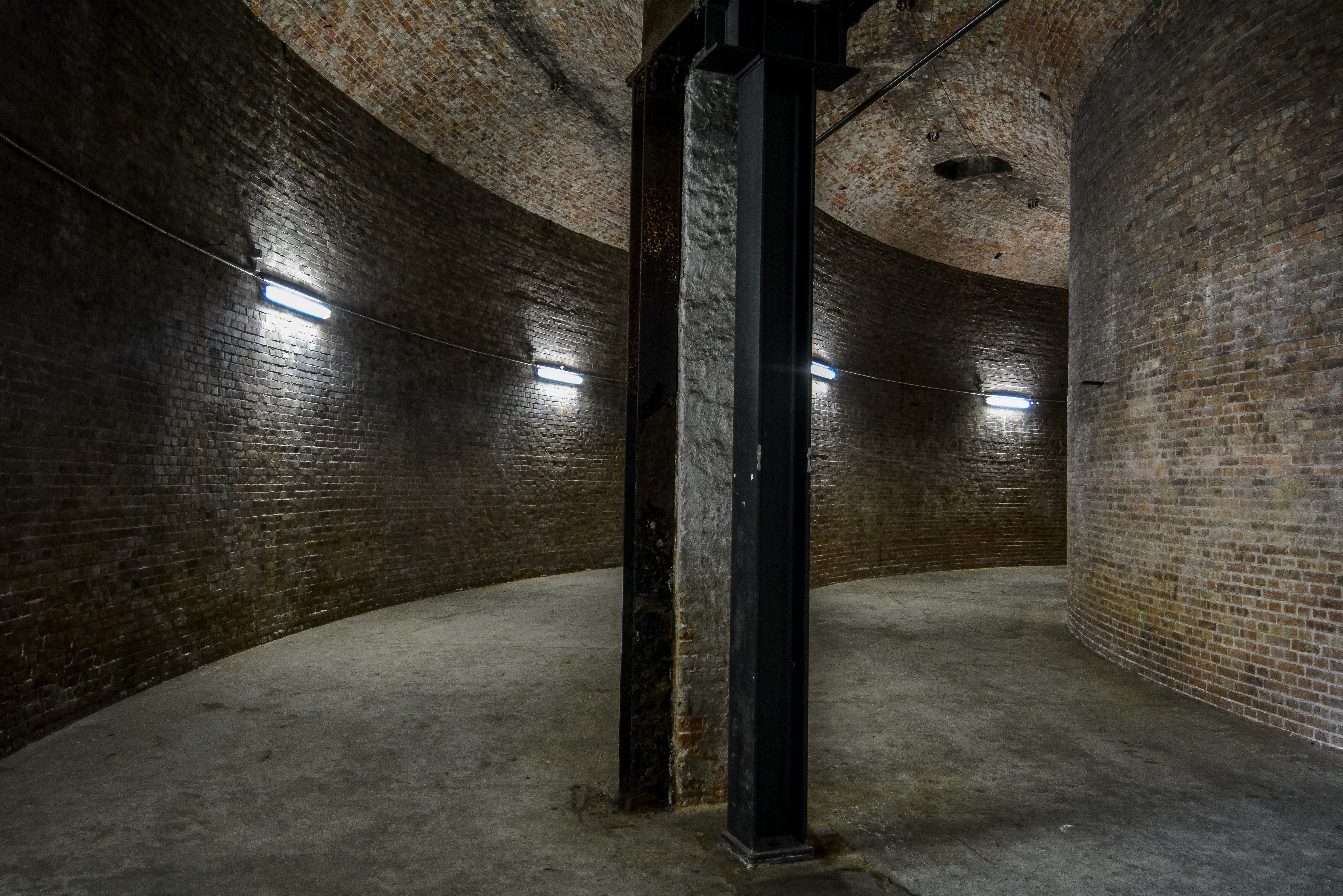 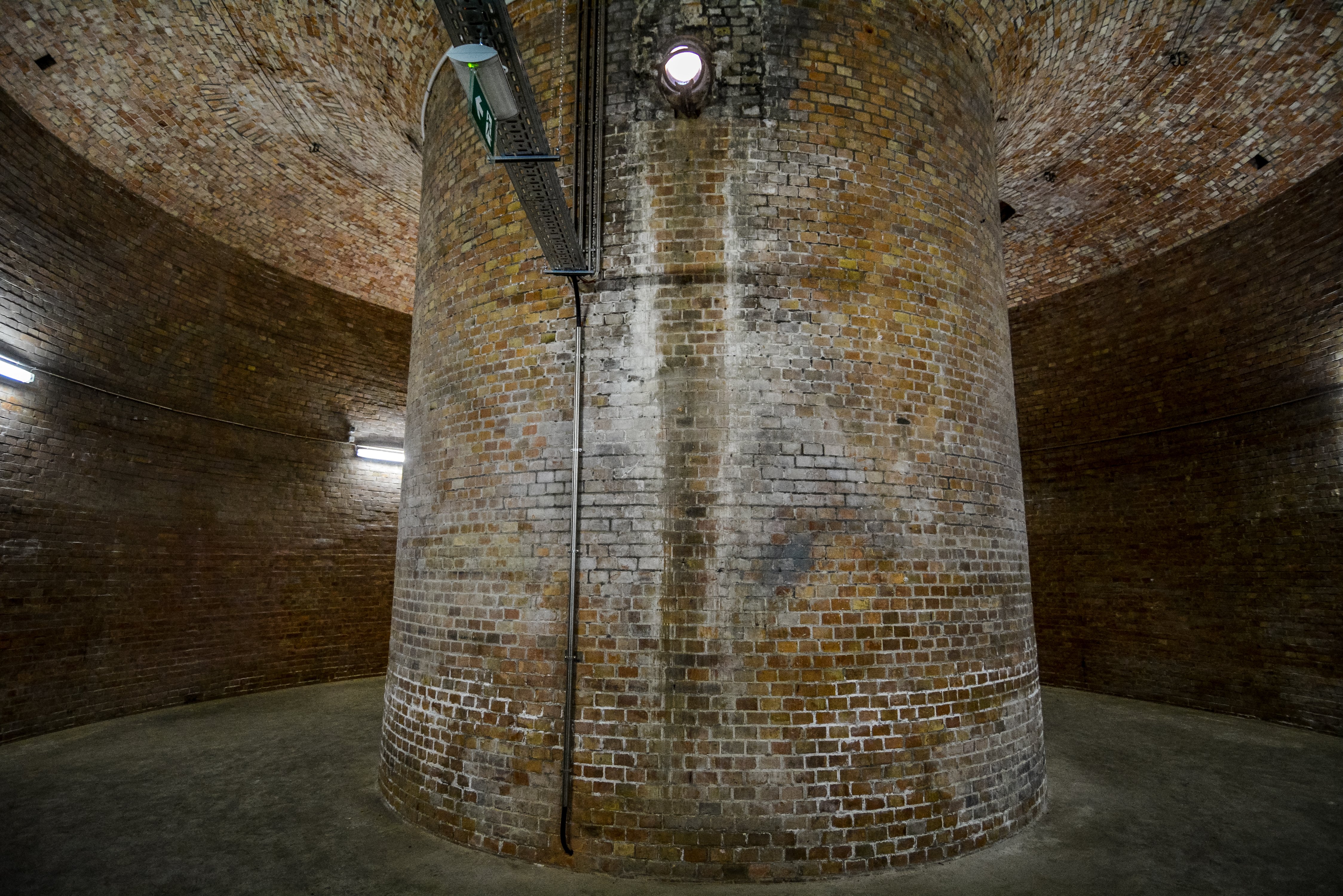 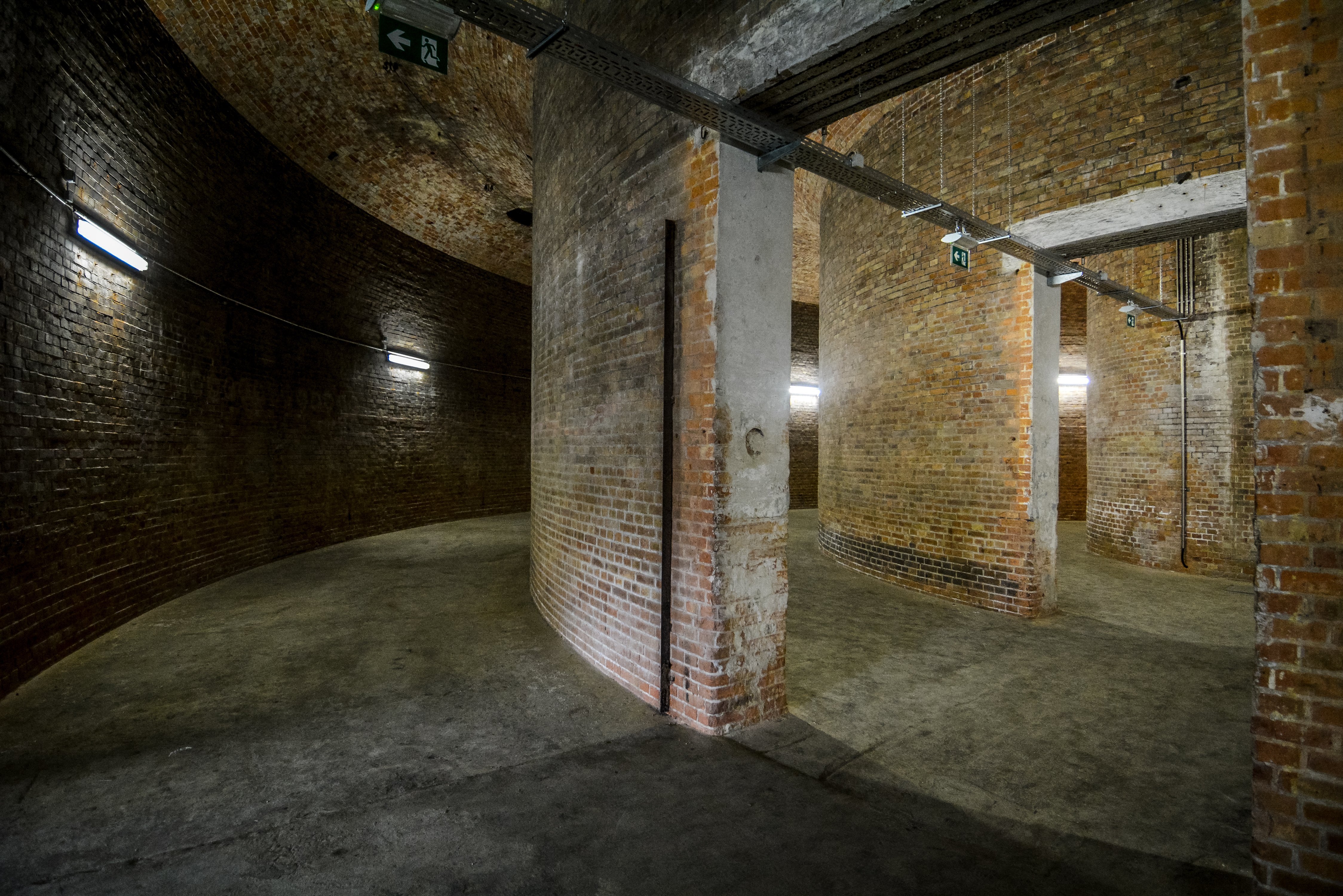 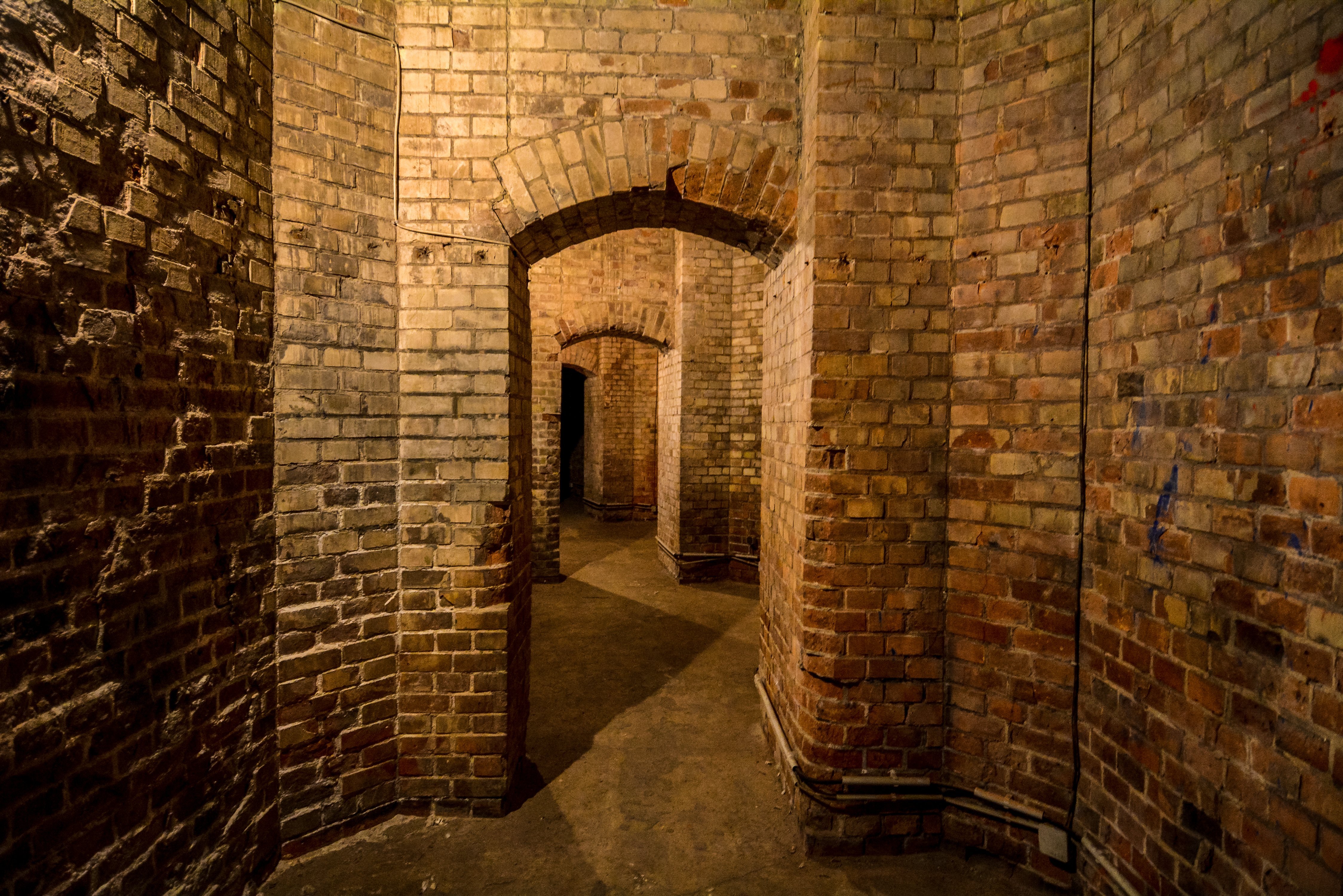 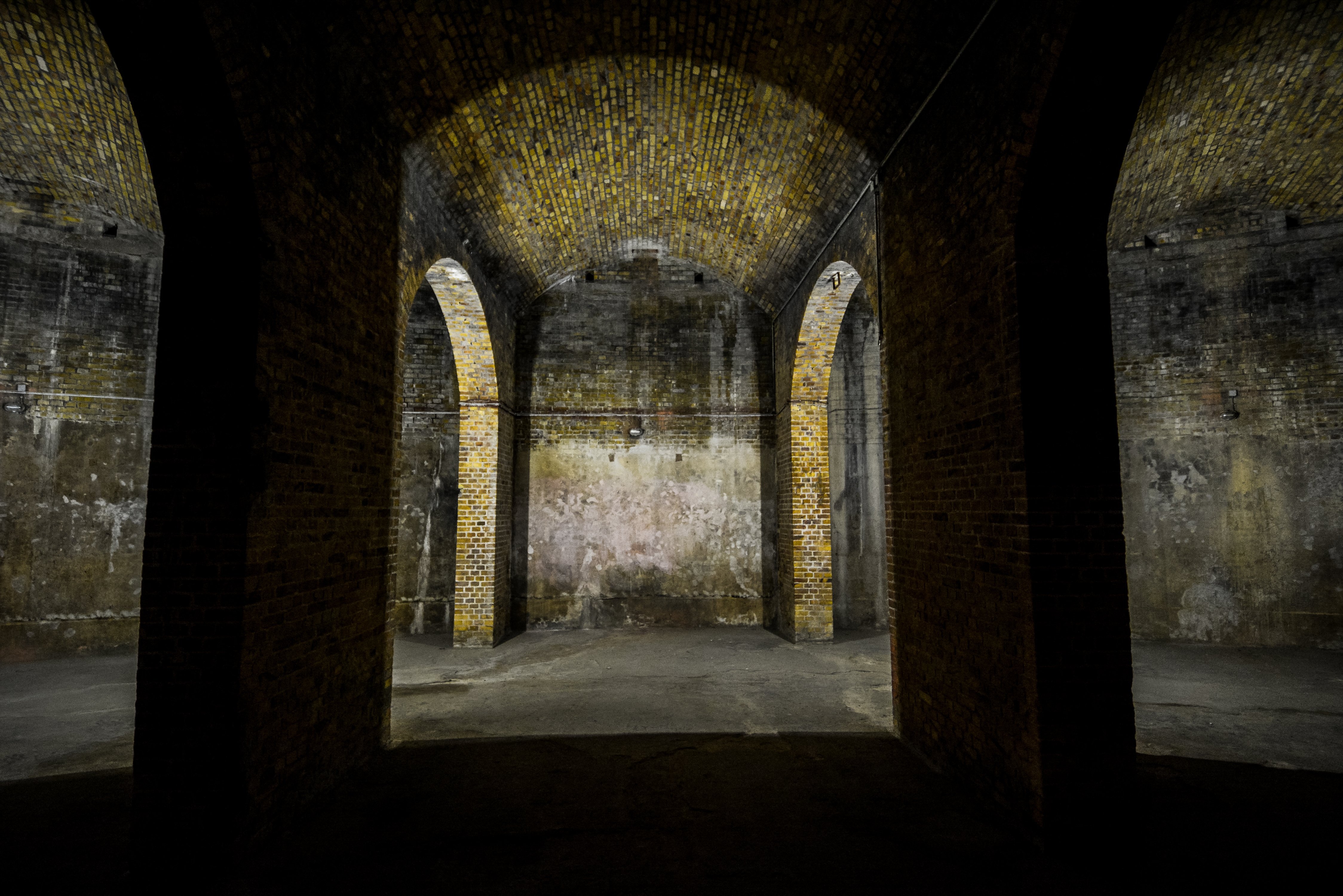 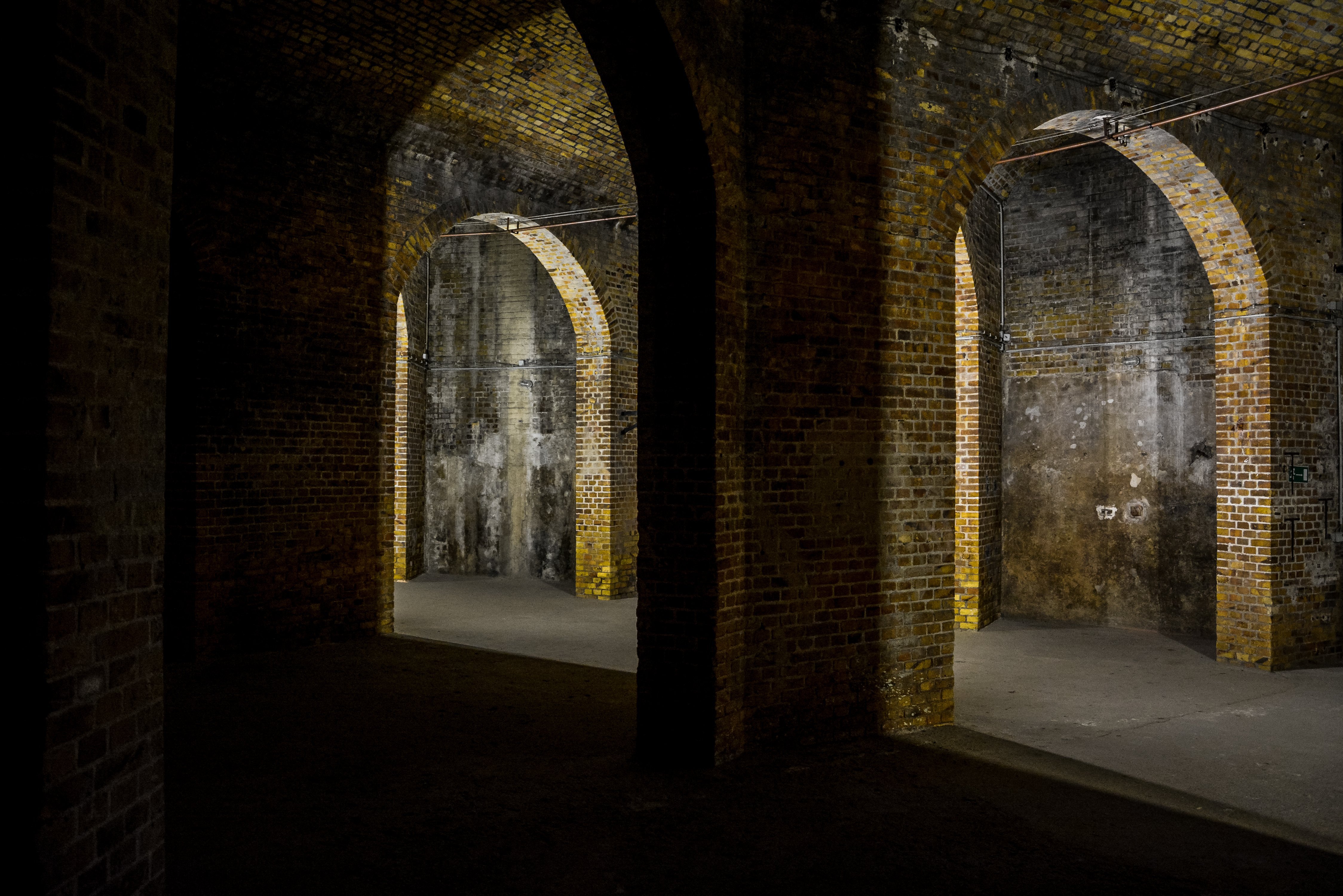 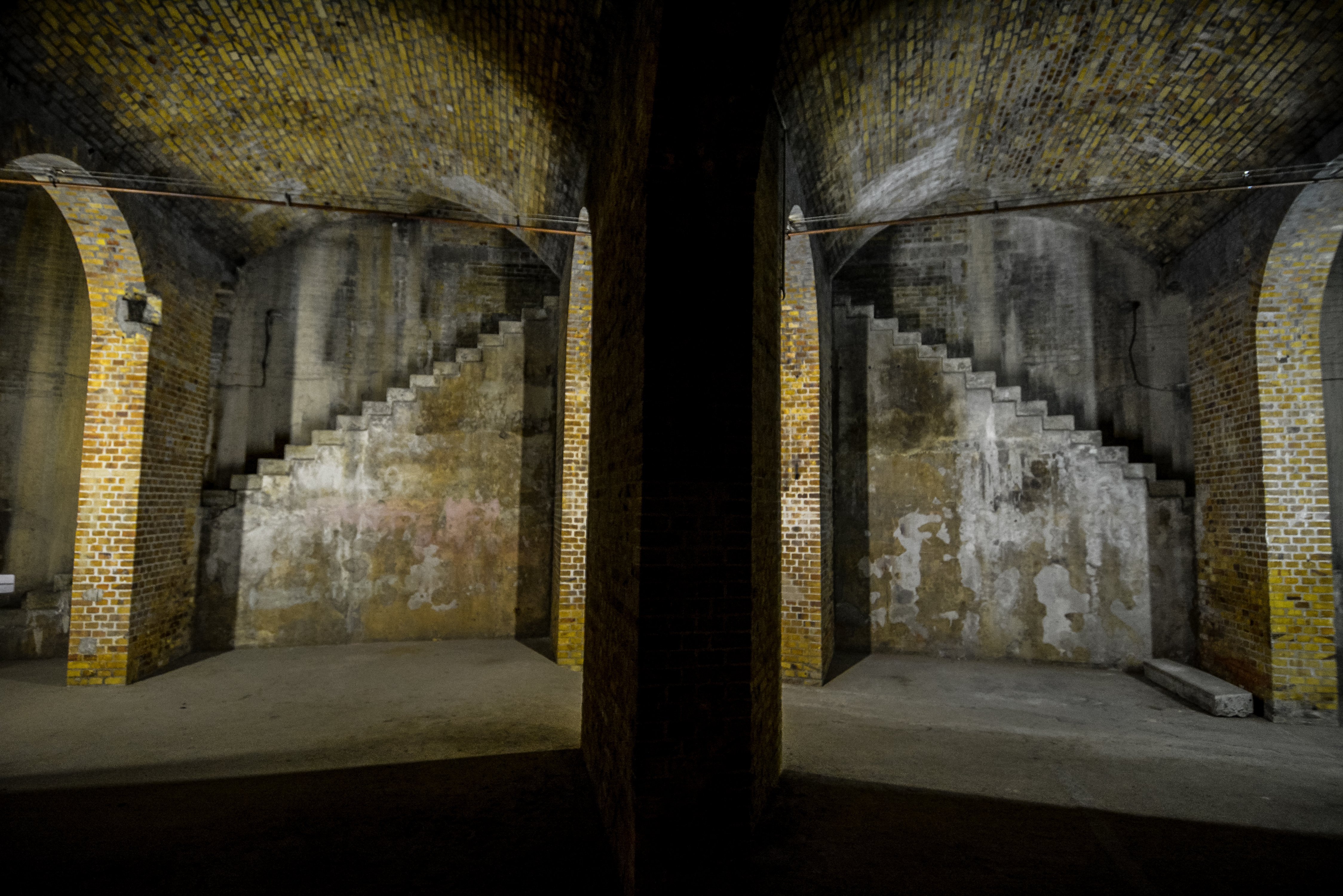 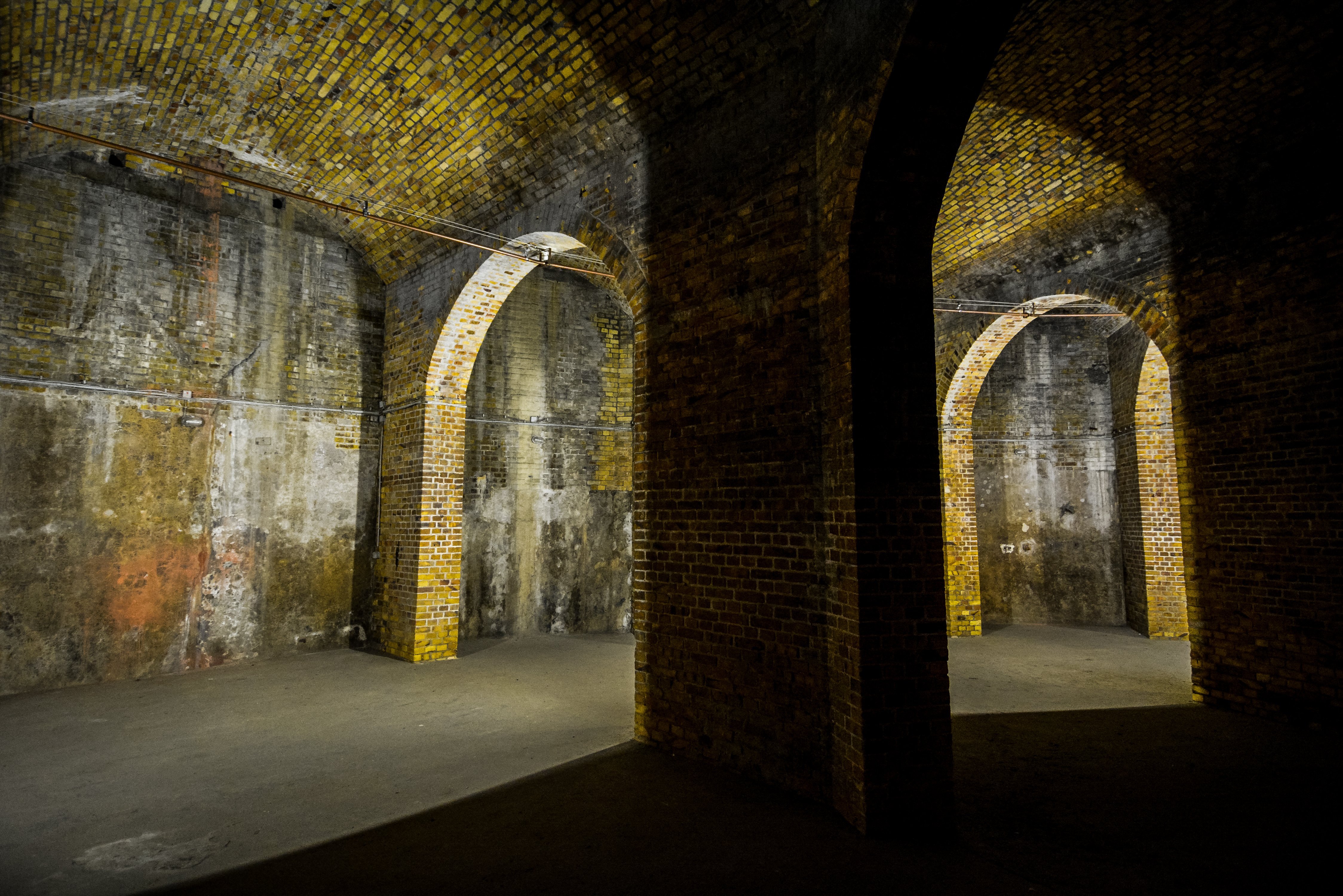 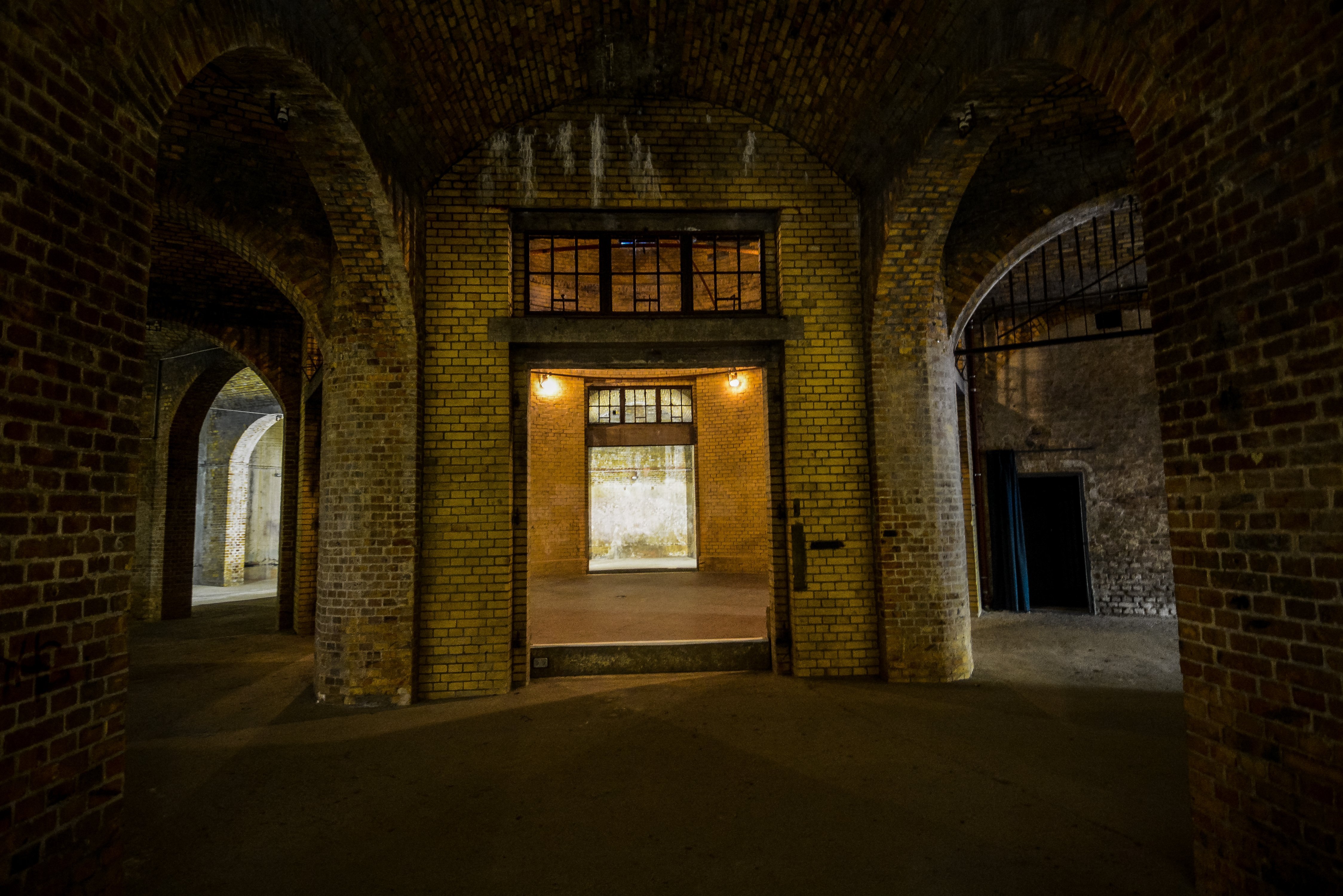 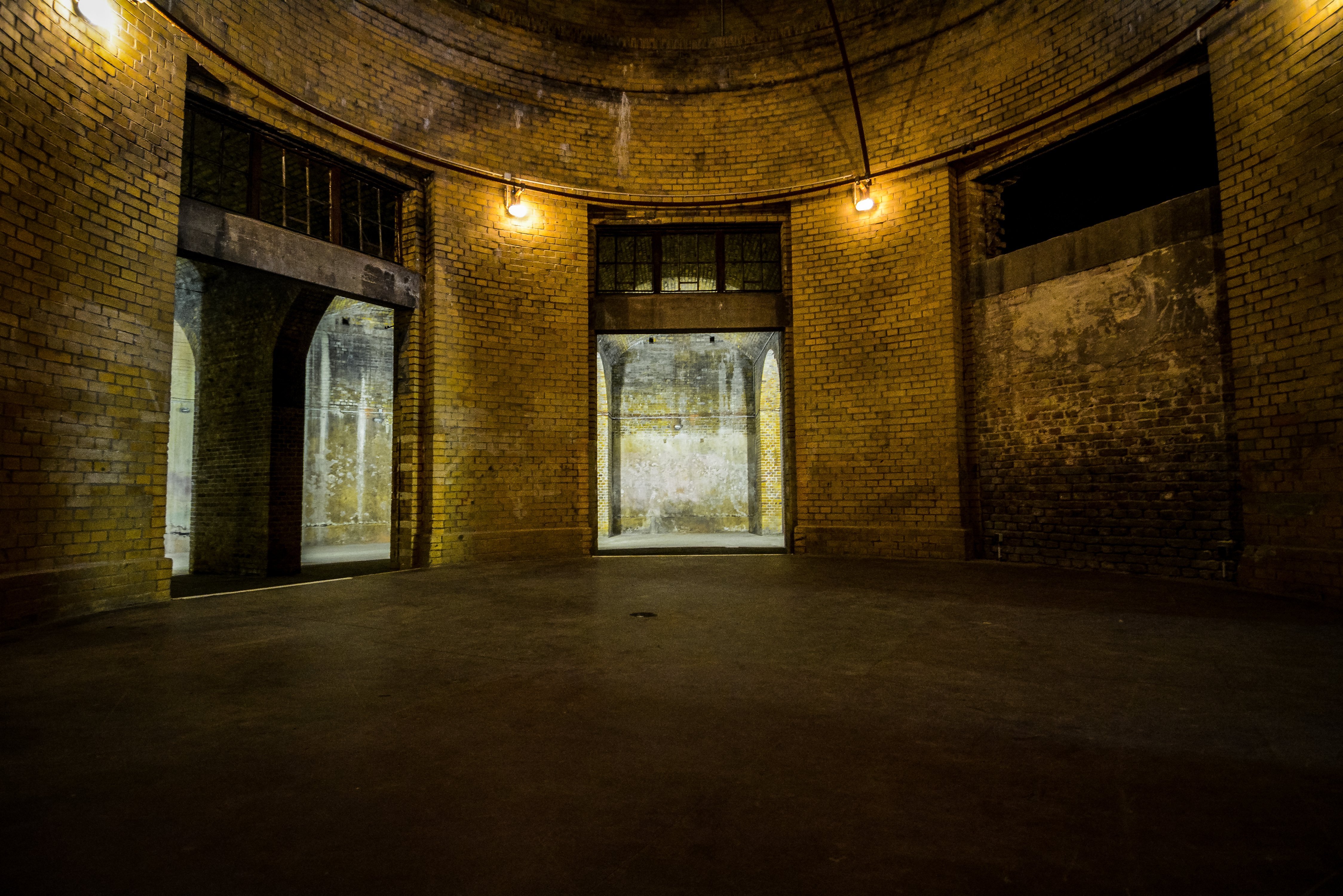