The year 2017 marked the 100th anniversary of the October Revolution in Russia, with which Lenin and his comrades toppled the Russian Empire and ushered in the reign of the Soviet Union. This centenary anniversary posed an excellent chance to showcase one of Berlin’s hidden gems – the secret Lenin.

East Berlin – the capital of the workers and farmers paradise had quite a devotion to statues and plaques depicting the fathers of socialism. While few of them can be found today – one larger than life depiction of Lenin in Berlin remains hidden in plain sight. Countless passersby and tourists wander underneath his gaze – unaware. Most people pass by the Bebelplatz along the Unter den Linden for a multitude of other reasons.

A copy thats older than the original

Most come to see the memorial “Versunkene Bibliothek” – an underground library of empty bookshelves to commemorate the burning of 20,000 books on this square deemed un-german by the Nazis. Others pass through here on their way to the Brandenburg Gate or to the picturesque Gendarmenmarkt. The few who come to gaze upon the “Alte Bibliothek” – affectionately called the Kommode (the dresser) by some  – don’t realize that Lenin is right above them, inadvertently pointing them in the direction of the Gendarmenmarkt. 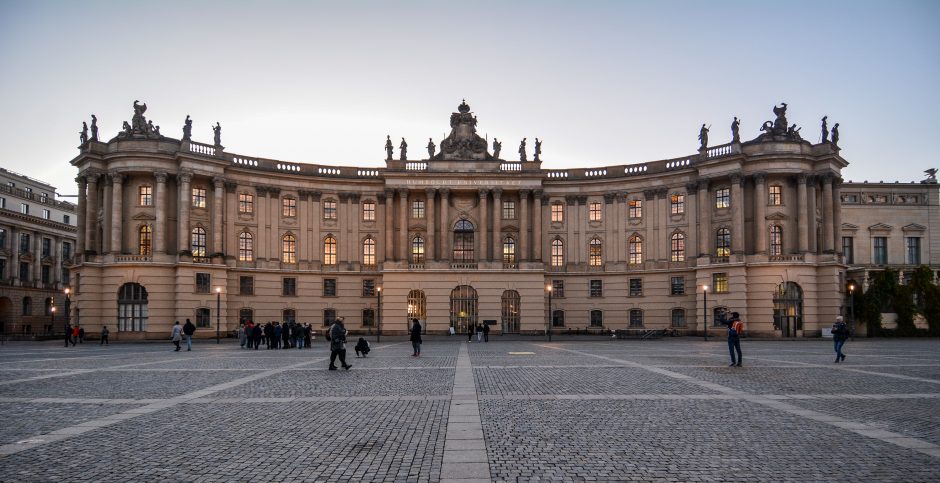 But lets take a step back and quickly delve into the history of this building. Frederick the Great (aka the Old Fritz, King of Prussia), ordered the construction of the library as he wanted the public to be able to access the literature previously housed in the Royal Library – which was only accessible to royalty, ministers and higher public servants at the time. With this public good in mind, it was also Fredericks will that the latin phrase “nutrimentum spiritus” – nourish the spirit – was placed above the portal of this new building. He wanted his subjects not only to be fed, but educated. 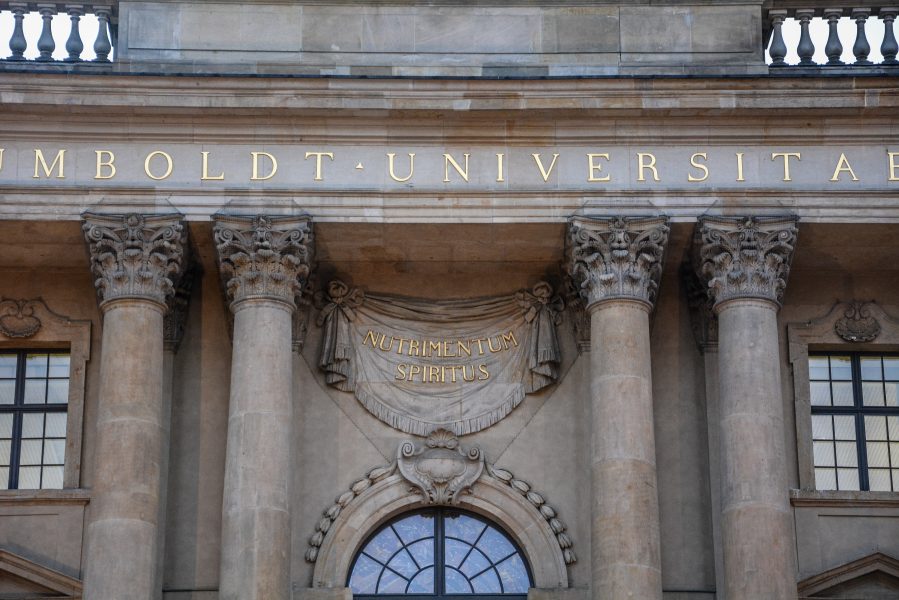 For those among you that feel like you’ve seen this building somewhere – you are completely right. The Alte Bibliothek mirrors the St. Michael’s Wing of the Hofburg in Vienna. Frederick the Great ordered his master builder to use the published building plans from the Austrian master builder Joseph Emanuel Fischer von Erlach. The original plans had been drawn up 50 years earlier for a different emperor, but were they hadn’t been used up until that point.

The Alte Bibliothek was built between 1775 and 1780. With an interesting twist of fate, the Austrians did actually end up deciding to build the “original” building, though it took them some time to come to this decision. They built the St. Michael’s Wing between 1889 and 1893, making it over a hundred years younger than its copy.

Lets fast forward into the future a bit. After already having a rather tumultuous life, Lenin spent some time in Germany, and especially in Berlin. Like many of todays travelers, it seems like Lenin had a thing for Berlin, visiting the city 12 times between 1895 and 1917. Wladimir Iljitsch Lenin lived in Berlin during the summer of 1895 in the Flensburger Straße 12 in Moabit.

We know this thanks to the fact that he had signed himself into the library with his address and occupation (lawyer). Lenin spent his time studying “The Holy Family”, “Herr Vogt”, and  “Die preußische Militärfrage und die deutsche Arbeiterpartei” by Karl Marx and Friedrich Engels.

We also know his address through another source – from letters that he sent to his mother.

I do not know whether you received my last letter which I sent from here about a week ago. I will repeat my address, just in case: Berlin, Moabit, Flensburgerstrasse, 12II (bei Frau Kurreick) Herrn W. Ulianoff.

I am fixed up here very well—a few steps away from me is the Tiergarten (a splendid park, the best and biggest in Berlin), the Spree, where I bathe every day, and a station of the urban railway. There is a railway here that traverses the whole town (above the streets). The trains run every five minutes, so it is easy for me to go “to town” (Moabit, where I am living, is actually considered a suburb).

The only bad thing is the language—I understand far less conversational German than French. The pronunciation of the Germans is so unlike what I am accustomed to that I do not even understand public speeches, although in France I understood practically everything in such speeches from the very outset.

The day before yesterday I was at the theatre; they played Hauptmann’s The Weavers. Although I had read the whole play beforehand in order to be able to follow it, I could not catch all the phrases. Still, I am not discouraged and only regret that I have too little time to study the language thoroughly.

So it seems like Lenin’s first visit to Berlin centered around struggling with the German language and reading up in the library. Exciting times indeed.

The Alte Bibliothek survived  right up until the end of 1944 -1945, when it was almost completely destroyed by aerial bombing. After the war ended, only segments of the facade had survived. The library lay in ruins until it was “restored” by the East German government in 1968. Interestingly enough, the facade was rebuilt in its original splendor (only removing a few symbols of the Prussian monarchy) – but the inside was built according to the “taste” of the late 60s.

The building was handed over to the Humboldt University in 1969, which then housed the section for Marxism-Communism. The East German government wanted to leave a lasting memory in honor of Lenin’s studies, so they hired the artist Frank Glaser to create a glass mosaic window in the newly renamed “Leninsaal”. 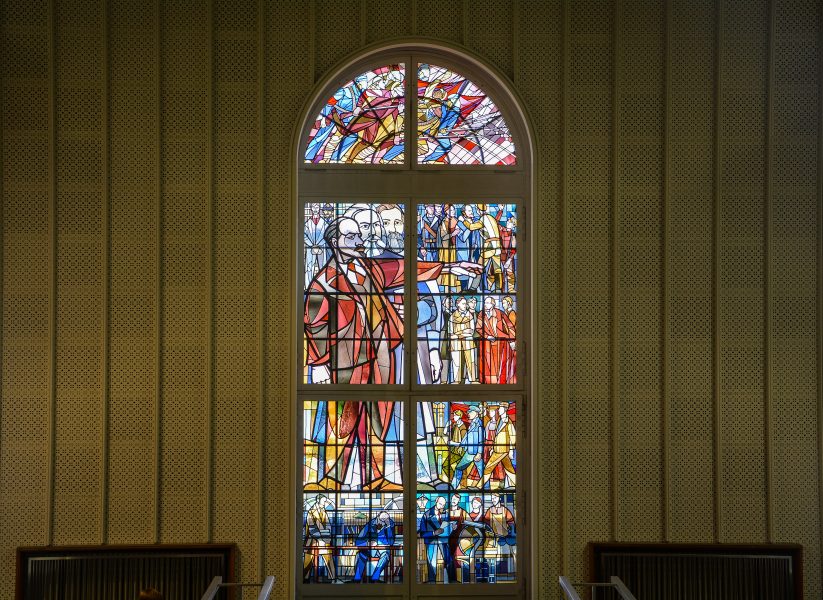 A glass mosaic for the Leninsaal

The window depicts Lenin pouring over his books, talking to workers, intellectuals and soldiers, marching with workers while holding the red flag of socialism, and it depicts him in a larger than life fashion pointing the way forward. As always Marx and Engels decorate the background. A plaque was also placed at the entrance of the hall commemorating the fact that Lenin worked and studied here in 1895.

Lenin statues, portraits and plaques were a primary target after the fall of the wall. It seems like the East Germans didn’t quite build up the same devotion to the soviet revolutionary leader as their russian brothers. Someone removed the plaque in front of the hall quietly and quickly in 1990 – its whereabouts remain unknown to this day.

The window though survived the people’s purge of socialist symbols. Lenin now keeps watch over the students and occasional visitors, waiting for the next revolution. Funnily enough, the Alte Bibliotheke now houses the Law Faculty of the Humboldt University, educating young lawyers just like it did in 1895. 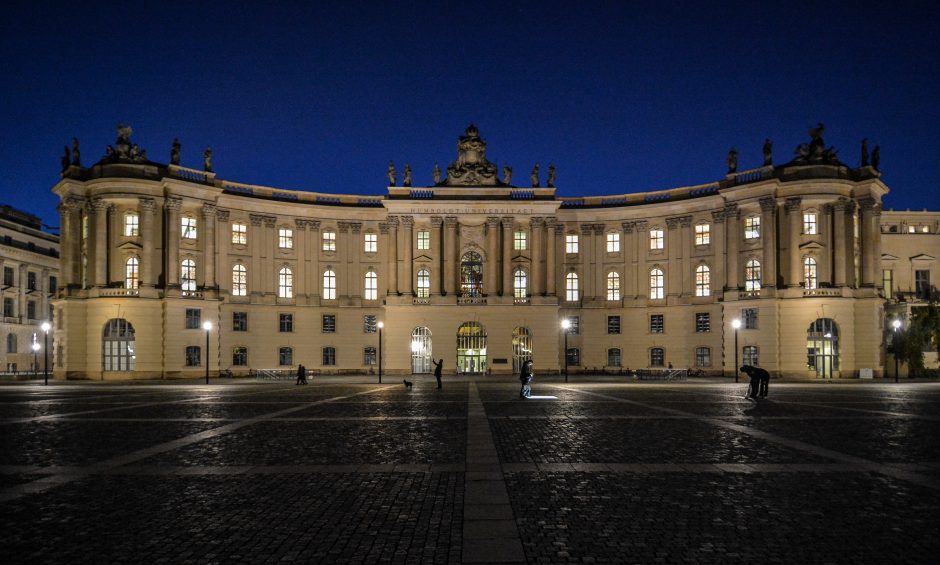 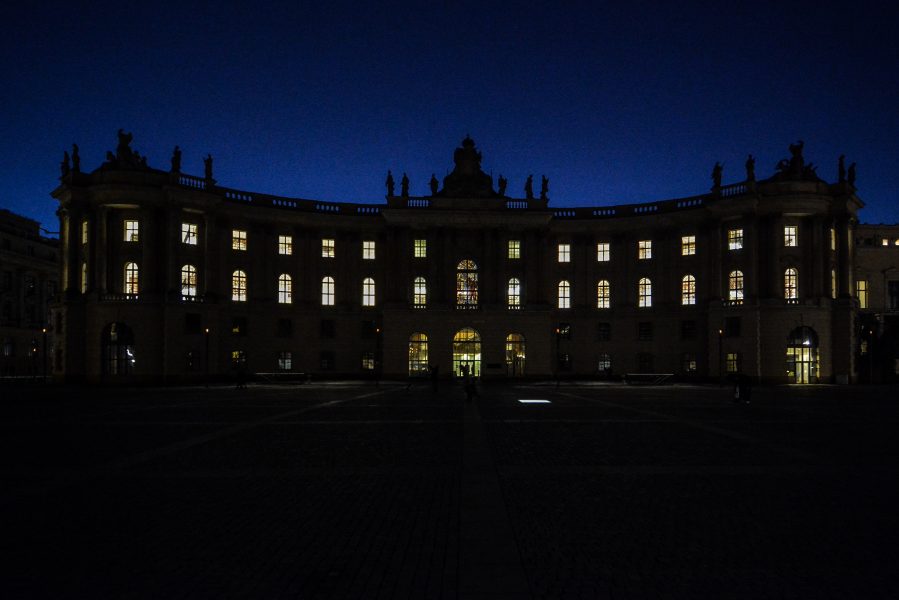 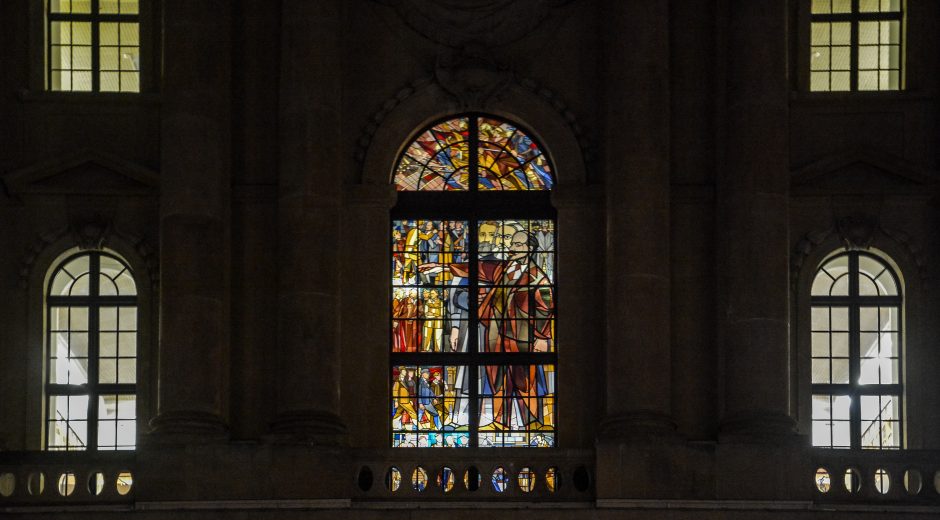 During the day, it is impossible to spot Lenin in the glass window from the outside – the (light) contrast is too strong. Hence why most people who wander past the Bebelplatz dont spot the revolutionary leader. But as soon as the sun sets, Lenin is illuminated by the lighting from the inside.

If you wait just a little bit longer, the illumination of the Alte Bibliothek is turned off (during the winter months it seems like this is around 6PM) while the lights inside are still turned on. Then you get the best view of Lenin in Berlin. For those a bit more curious: You can also enter the Alte Bibliothek in Berlin and peek inside the former Leninsaal and get a good glimpse of the window from the inside.

If you have found a hankering for Lenin, you should head up further north to the city of Schwerin, which is host to the last public Lenin statue in Germany.