The Wernerbad was Berlins oldest (abandoned) open air swimming pool. The term Swimmingpool might be a bit of a glorification as the origins of the Wernerbad are a kettle pond – a pond that’s formed by the water of a melting glacier.

The history of the pool dates back to when a rather wealthy man named Wilhelm Werner bought the pond (back then known as Achtruthenpfuhl)  in 1899 from the farmer August Giese. In 1901 he built the restaurant  and bathing lodge “Badeschlösschen”. The whole bathing complex was then renamed into “Wernerbad” in 1905.

Just as a frame of refence: Everybody’s favorite Bathtub -> the Strandbad Wannsee was opened on the 8th of May 1907, so the Wernerbad predates that by 2 years and cements its status as Berlins first public “Freibad”.

East-Berlin took over ownership of the Wernerbad in 1951, and thanks to the Nationale Aufbauwerk (a “voluntary” work program initiated in 1951) overhauled the pond from 1957 to 1959 with a competition style 50 meter pool.

Closed after 97 years of service

The now abandoned swimming pool in East-Berlin was closed in 2002 due to hygienic reasons and the lack of funds for a much-needed renovation – a fate very much shared with the abandoned Stadtbad Lichtenberg (also known as the Hubertusbad). Over the years politicians and local initiatives tried to reopen the Wernerbad, but to no avail. The projected costs for a new water filtration system and renovation (well over 10 million), as well as the immediate neighbours rejecting the idea (too loud, not enough parking spaces, etc) have killed off every attempt of the years.

As of 2016 it seems like a solution of sorts has been found. The Berliner Bäderbetriebe will re-naturalize the pool. This means that they will remove the concrete at the edge of the pool and introduce a host of water plants to the area. The slide and other structures associated with the pool will be removed.

The Wernerbad in Kaulsdorf still belongs to the Berliner Bäderbetrieben, which through the cities property management wants to sell the grounds. Its been planned that an Old Peoples home for those suffering from Dementia will be built, which the neighbours have been protesting against for years (unsuccessfully). They would rather the abandoned pool would be turned into a public green area.

At some point, somebody set some goldfish free into the Wernerbad, which have – due to the lack of any real natural predators – multiplied spectacularly. The word is still out what will happen to them (and if they actually survived the cold winter).

The story of Knautsche the Hippo

But hold on! Theres one more piece to this story – the Hippo! Almost hidden by the reeds in the abandoned pool in Berlin stands the Hippo known as “Knautschke”. Built the by the sculptor Erwin Kobbert, the Hippo was named after its real life counterpart which was born on the 29th of may 1943 in the Berlin Zoo.

Knautschke was one of the 93 animals which survived the second world war. Over the course of his life,  Knautschke managed to father 35 offspring – though this would be his undoing. Knautschke died in 1988 after he was injured in a territorial dispute with his son Nante. A bronze sculpture of Knautschke can be found in the Zoologischen Garten Berlin.

The sculpture in the Wernerbad in Mahlsdorf is almost as popular is its namesake and was part of the ongoing debate about that future status of the abandoned pool.  Part of  the re-naturlisation plan of the Wernerbad was that the Hippo Knautschke gets to remain where it is – as a protected monument. At least Knautschke gets a happy end. 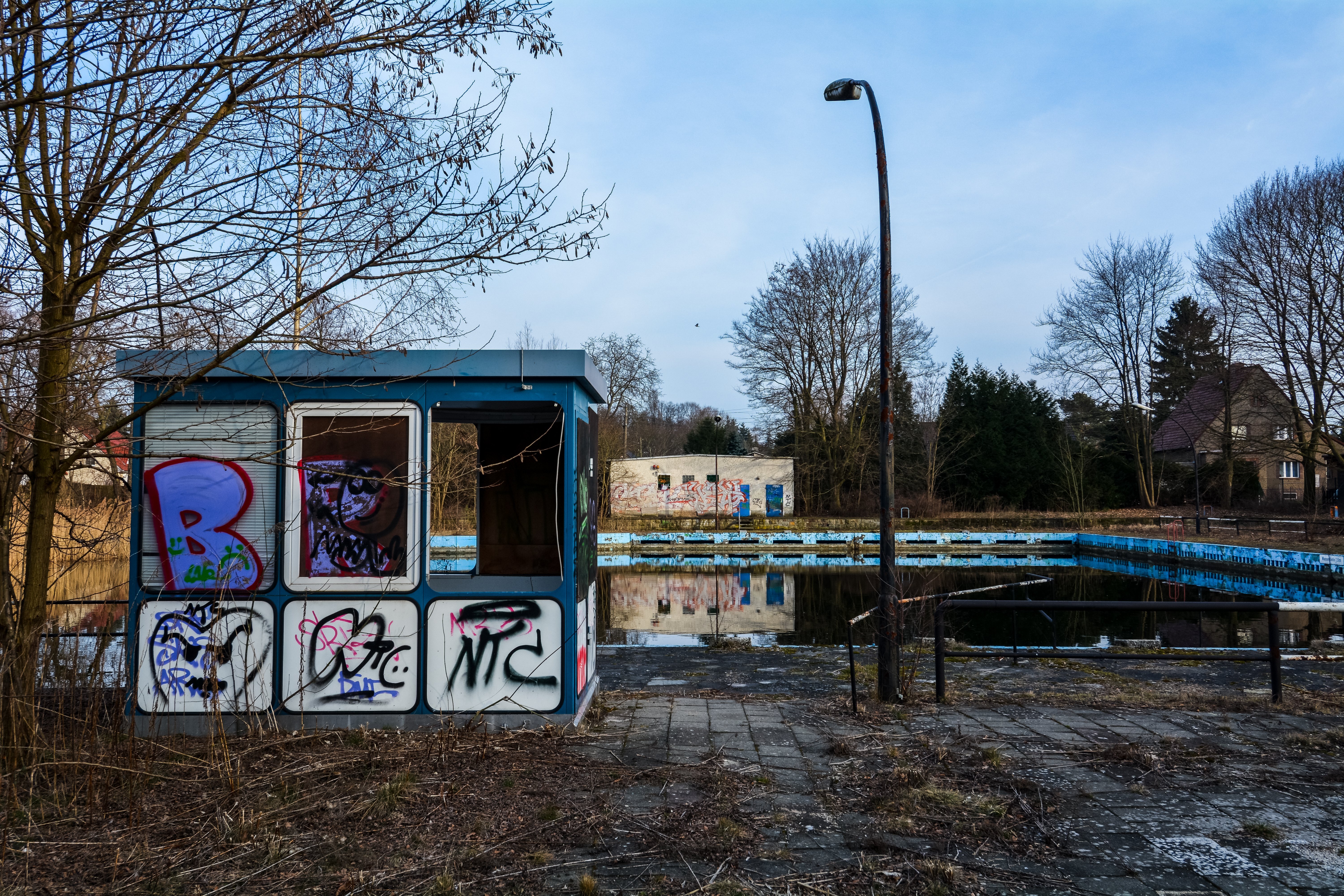 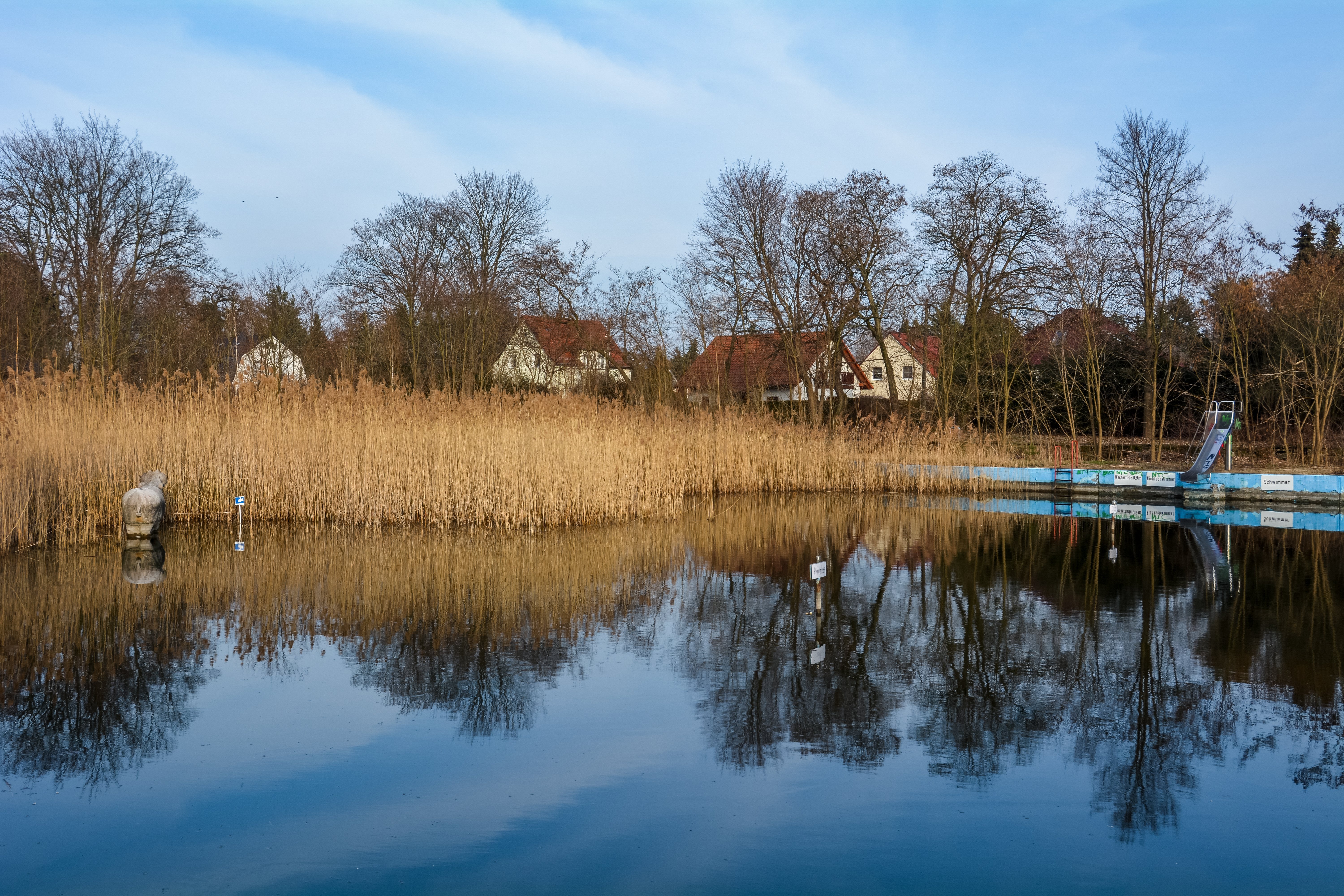 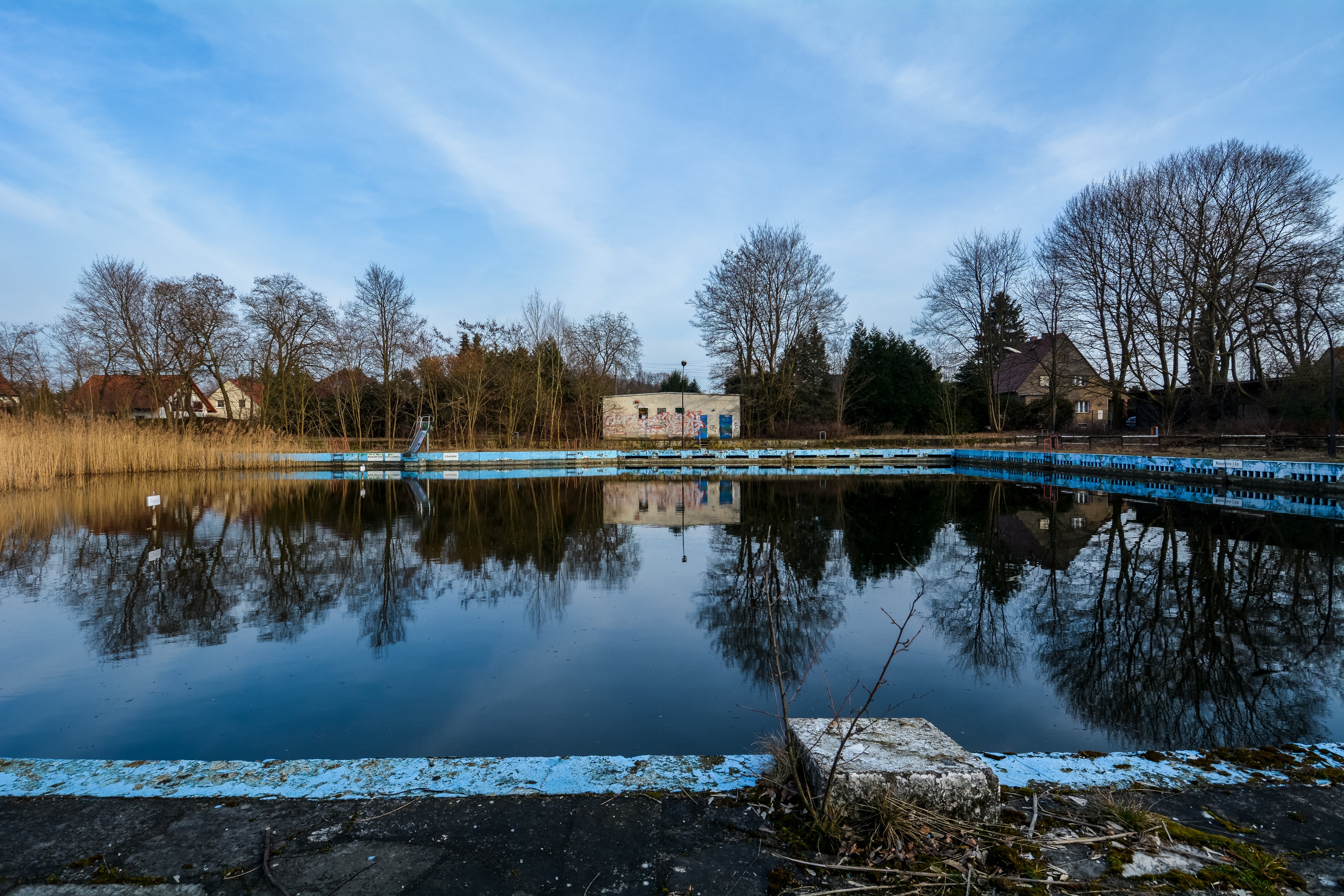 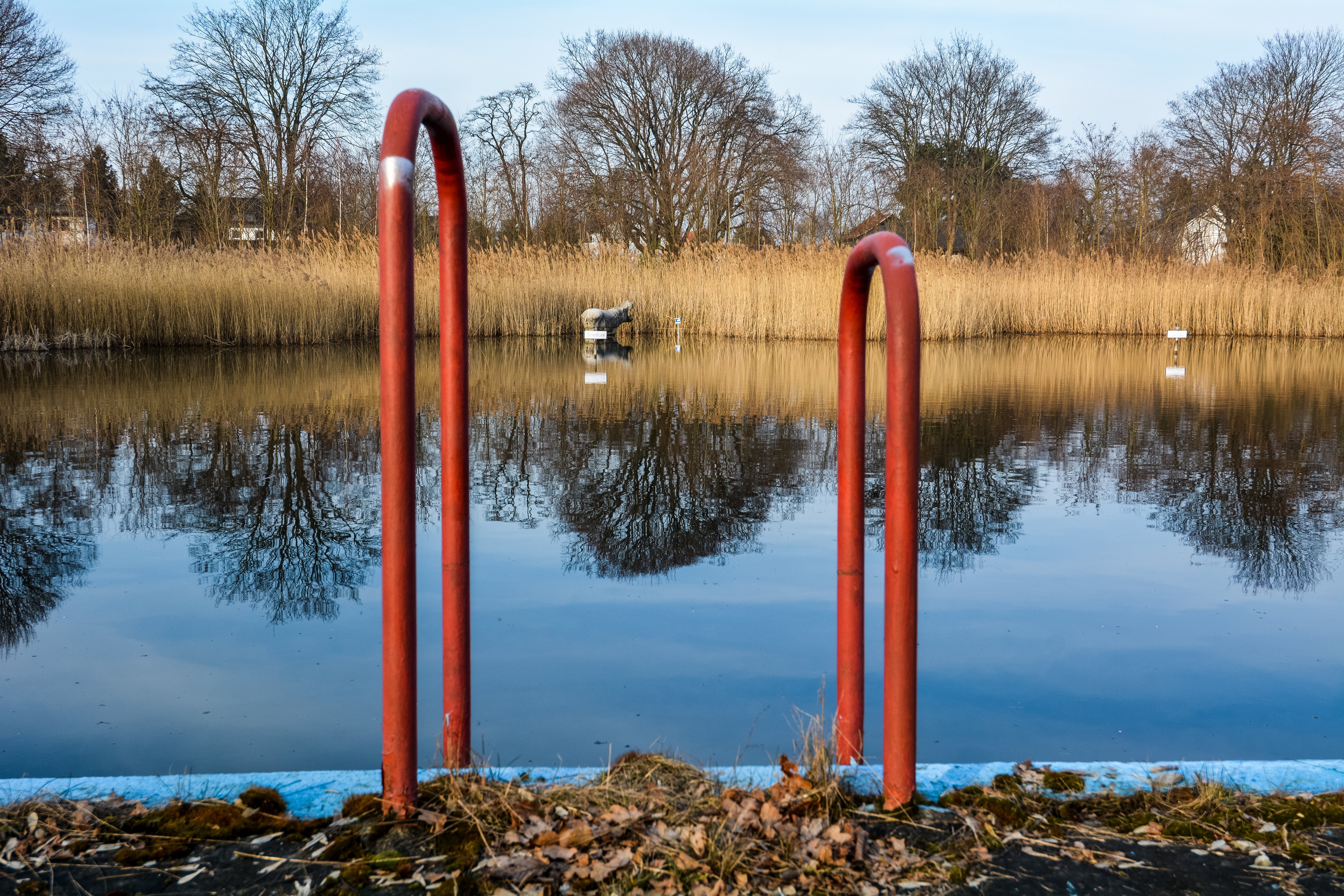 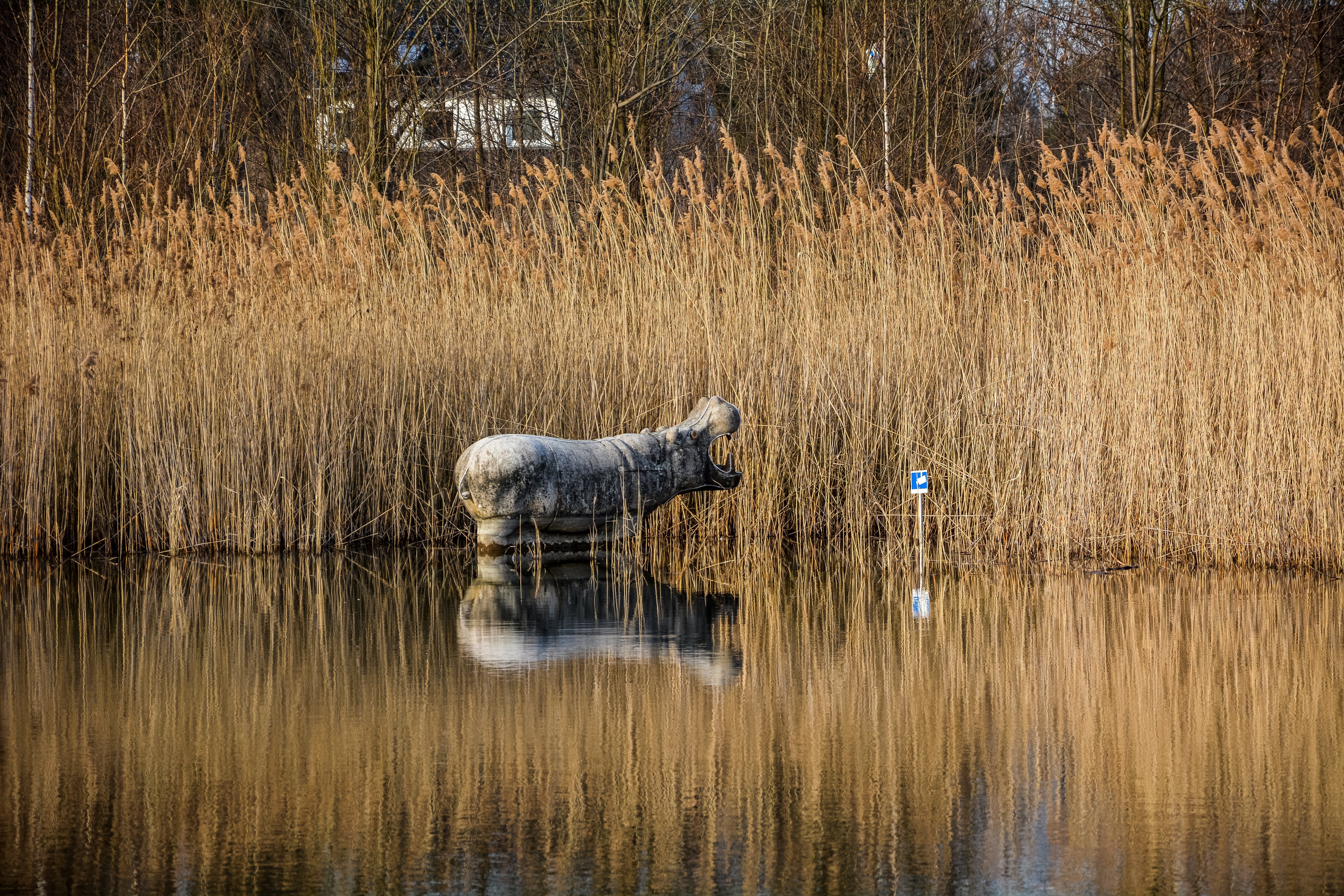 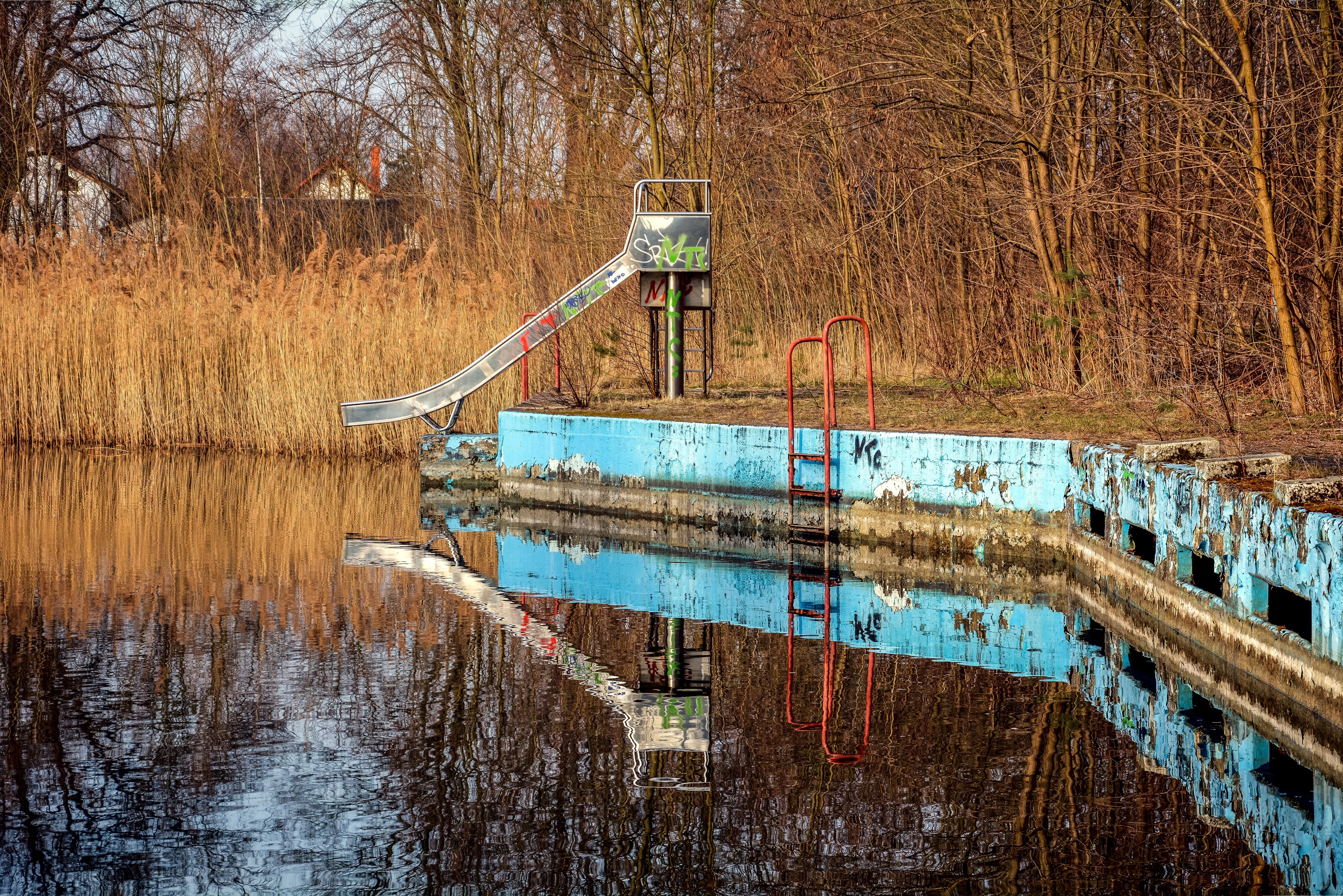 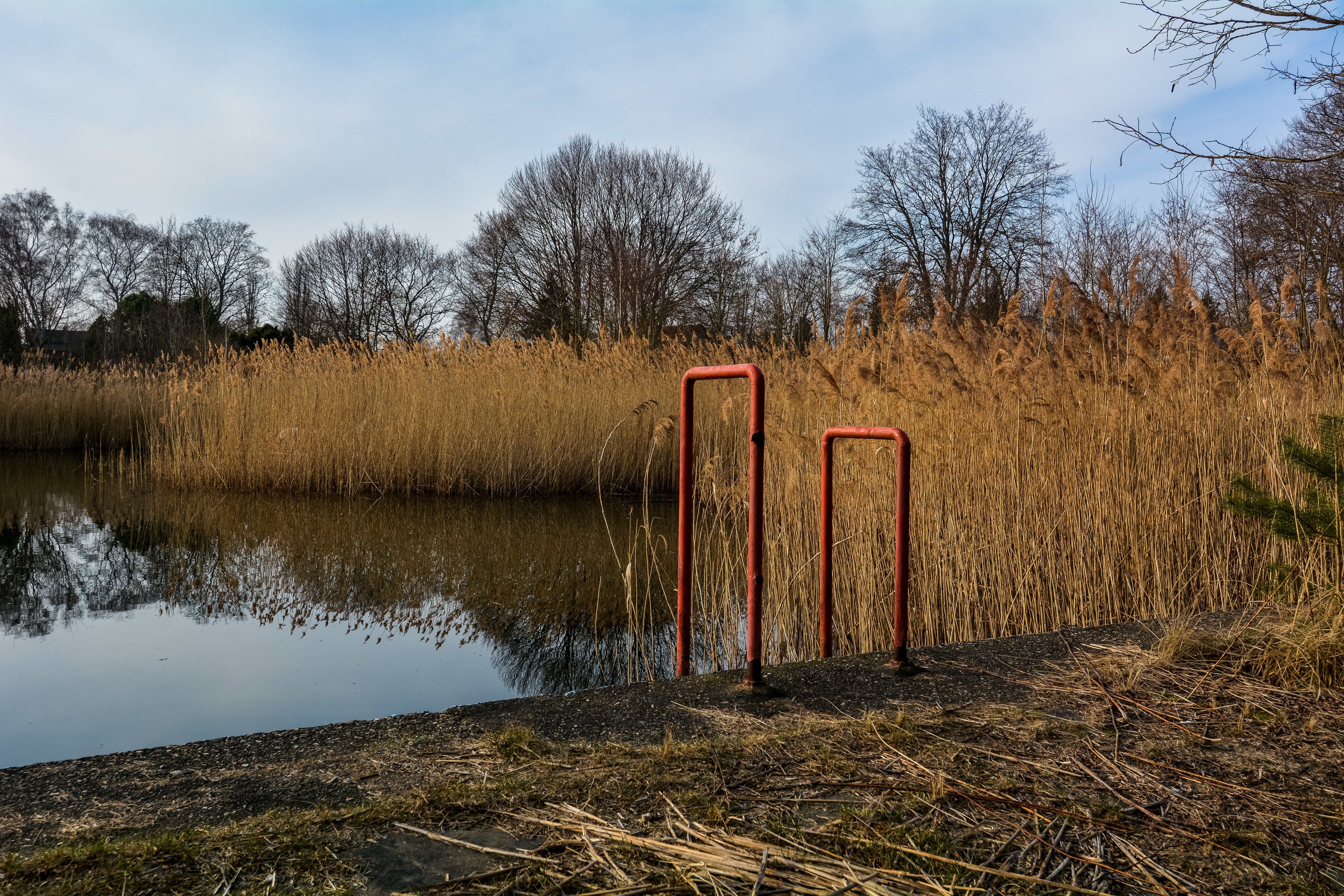 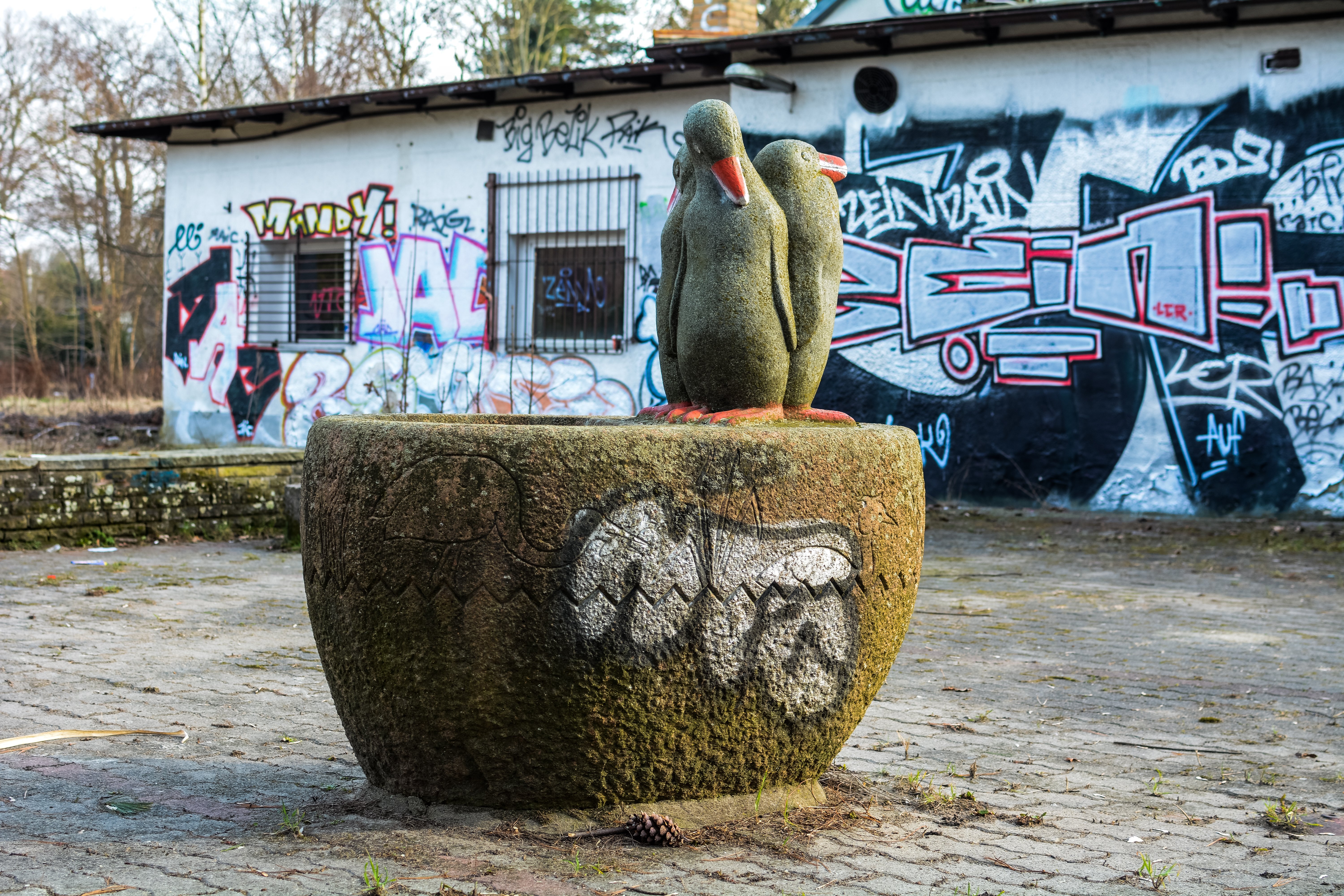 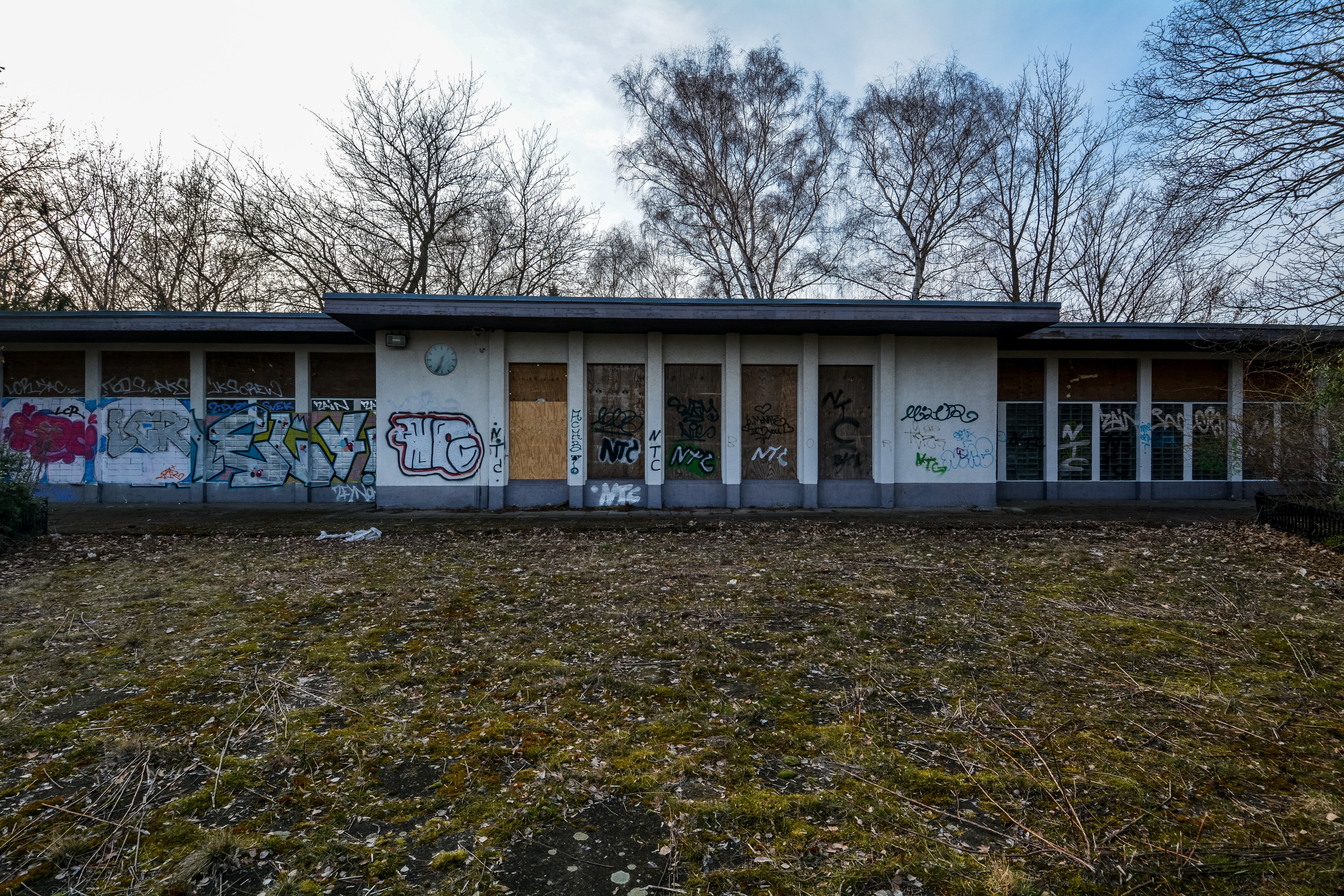 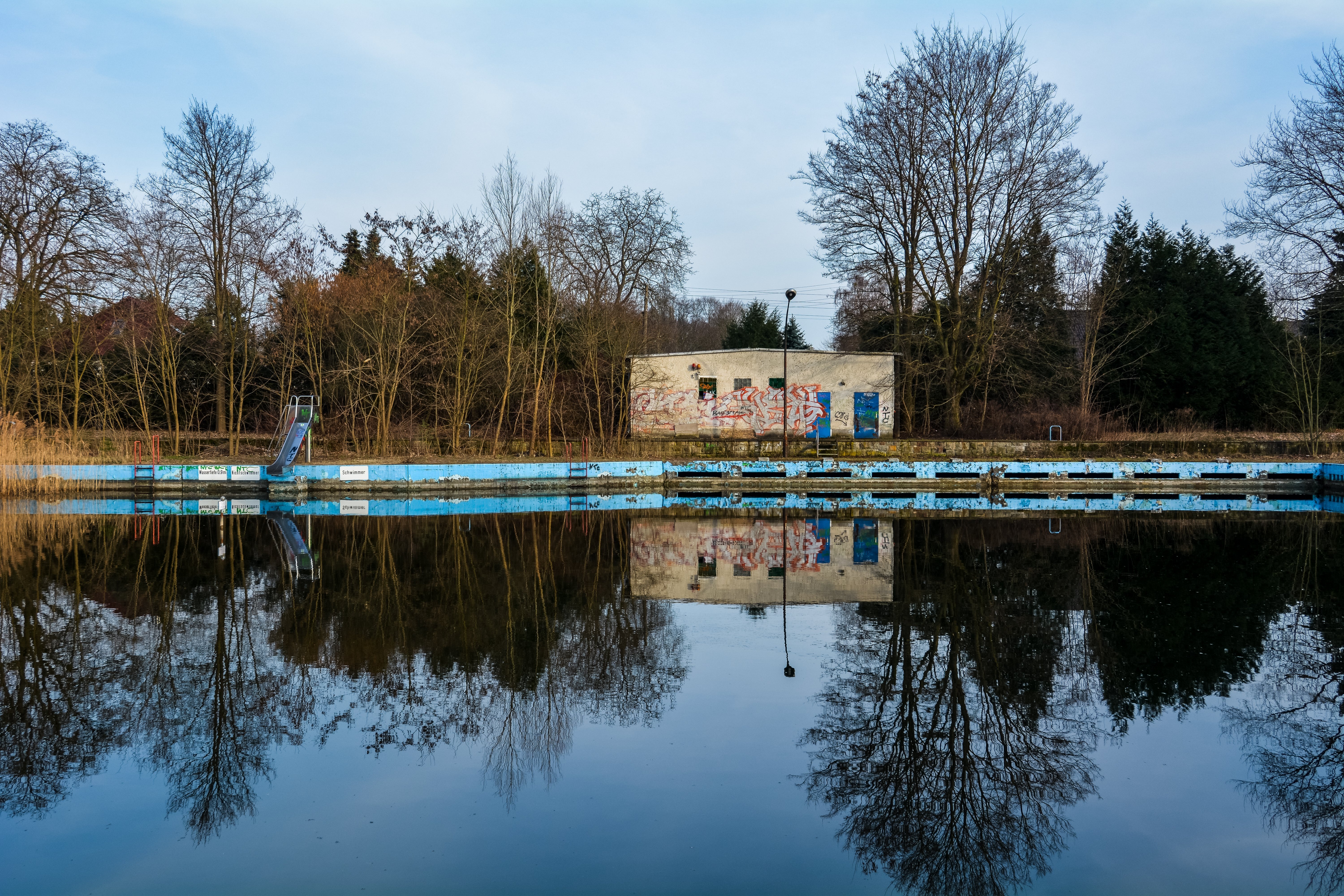 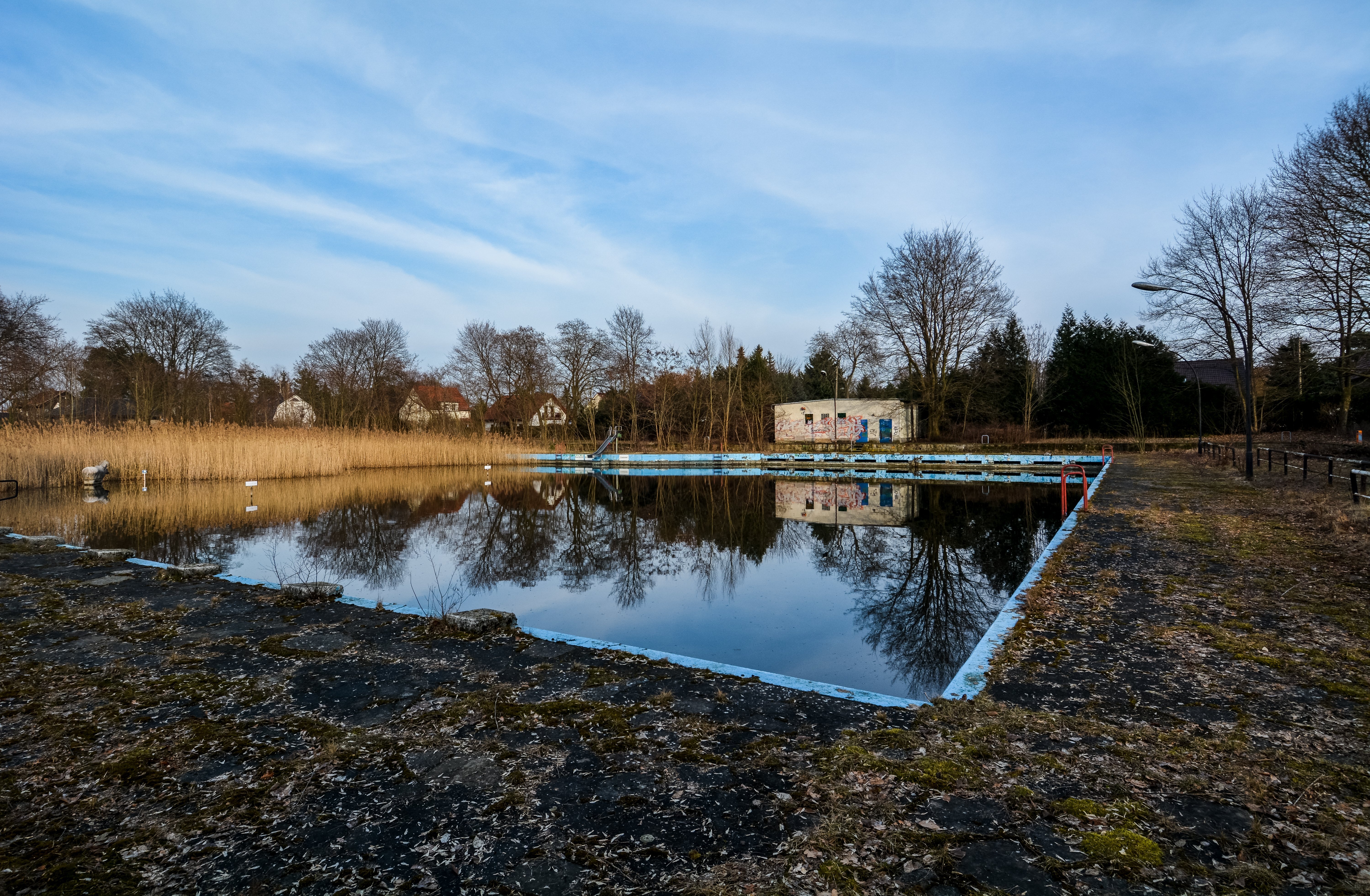 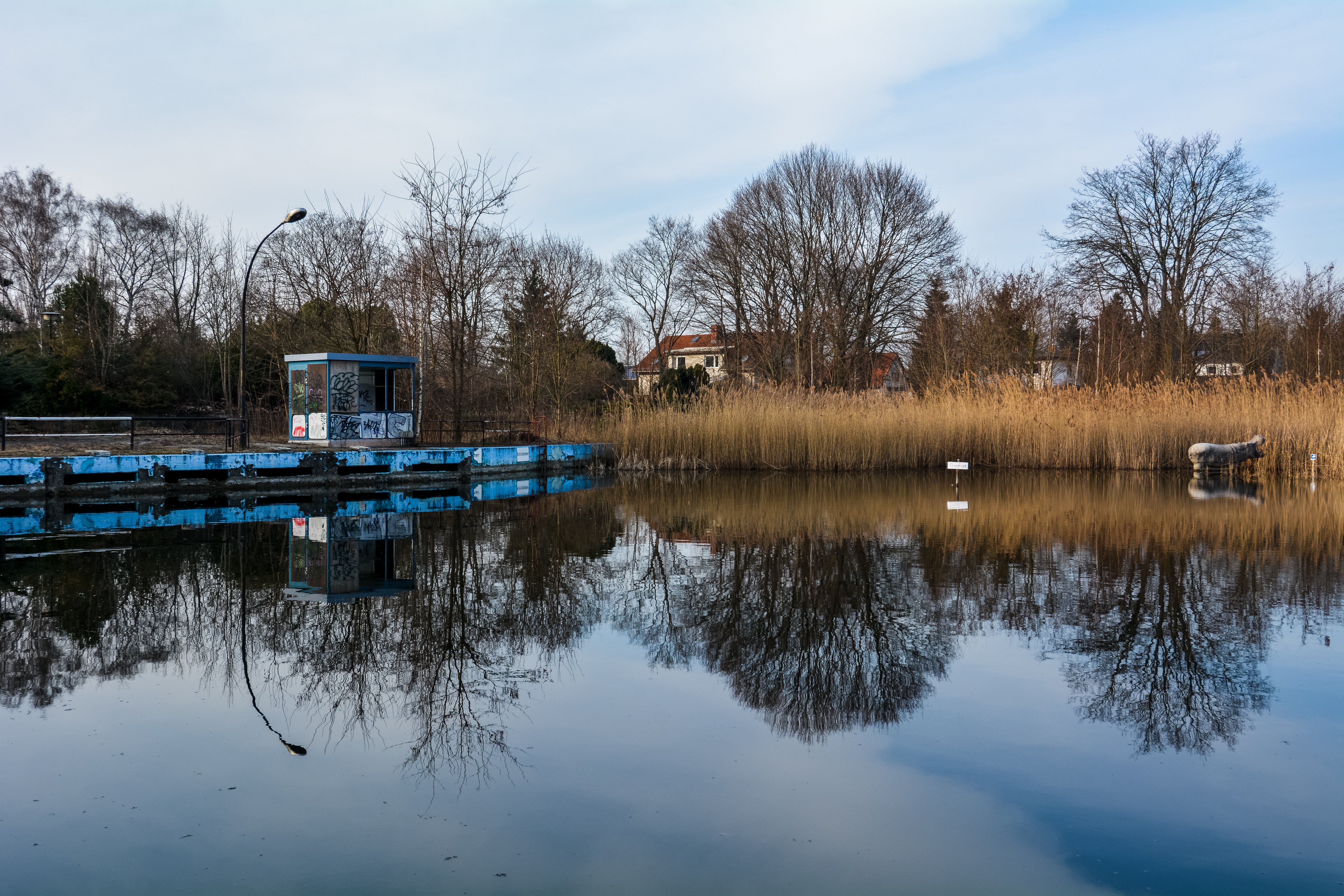