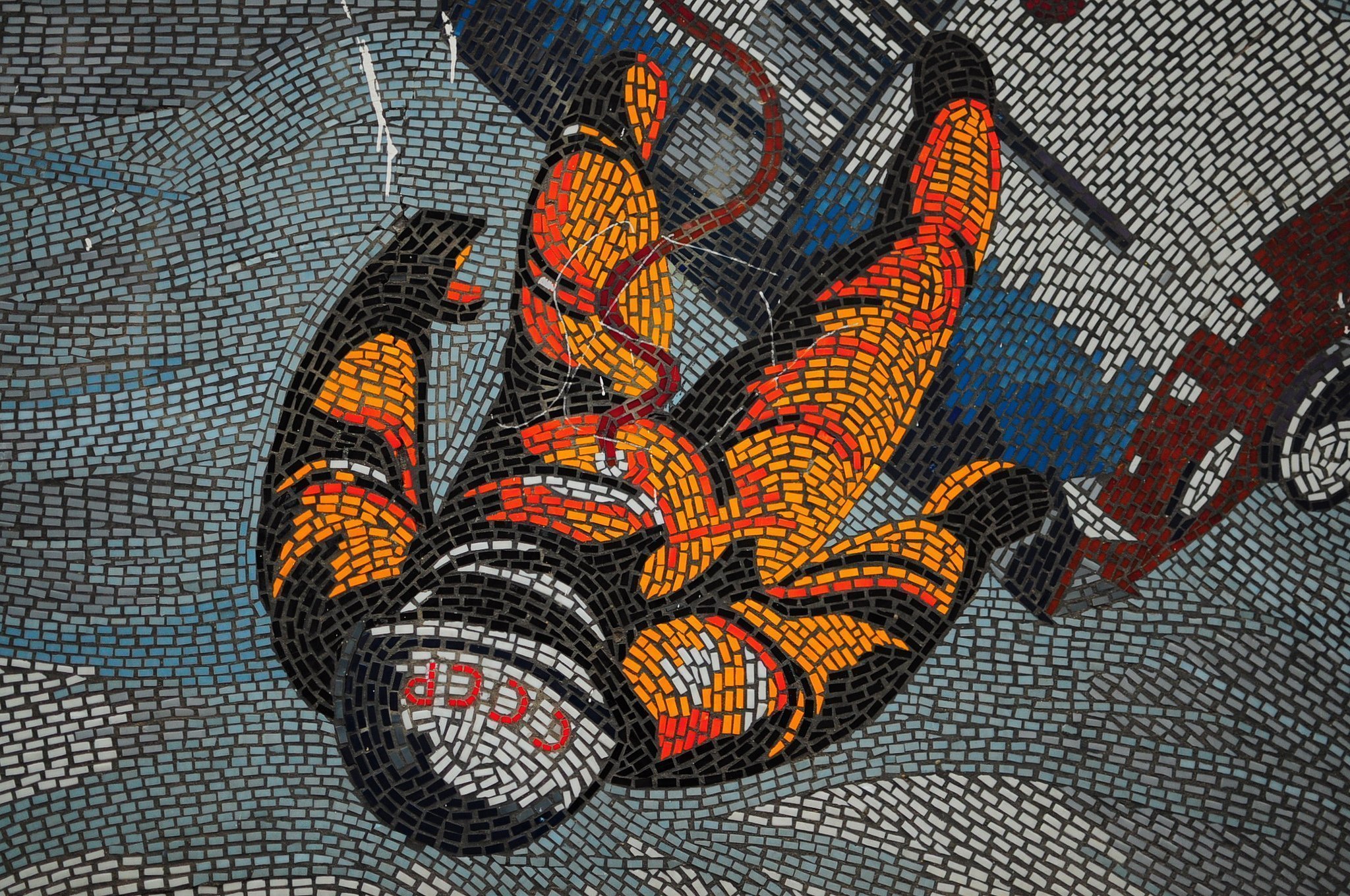 Potsdams a nice place – but it’s just not quite as cool as its younger brother Berlin. Whatever Potsdam does it’s always seemingly second class to Dickes B. Its got the Original Brandenburger Tor (Potsdam 1770, Berlin 1788, Königsberg 1860), the Stadschloß they restored is cheaper (and was finished quicker) than Berlins (120 million to 590 million) and they’ve got less dog shit on the streets, but for reasons that be – Potsdam has the dubious honour of just being a 1 day tourist destination – reduced to Sans Souci and a coffee at the Brandenburger Tor.

There is more to Potsdam than Sans Souci, and exploring the city requires more than just 1 day – this is something that even I have only slowly begun to realize. Despite being only a 20 minute train ride away, ive only managed to visit Potsdam 7 times in the past 8 years. Berlin is a hard city to leave – yet when I heard that there was an East German Mosaic which was rumoured to be demolished, there was reason enough for me to venture down and check it out.

With a little bit of research I found out that the Mosaic was part of the “Datenverarbeitungszentrum” (in short DVZ) – a Data Center which was responsible for helping smaller firms who lacked their own Data Centers with Billing (data acquisition, processing, archiving) and software development in the DDR. So whats all this about the Mosaic being demolished? Well to understand the fate of the Mosaic and the DVZ, one needs to go back a few years.

Potsdam survived the majority of the second world war relatively undamaged (in comparison to other larger cities in Germany). Most of the destruction happened during a raid on the 14th of April 1945 – which left the city center, the Stadschloß and the old market completely destroyed. The Garrison Church of Potsdam – built under Friedrich Wilhelm I. in 1722 was hit and damaged by several bombs which failed to detonate on impact. While several pieces of the invaluable inventory were saved, the church was gutted by a fire when one of the bombs ended up detonating. The church sustained even more damage after the soviet army started shelling the city.

The Garrison Church was one of the most important baroque churches in Potsdam. It was not only one of Potsdams most impressive landmarks, but also served as the main place of worship for the Prussian aristocracy and military. It was here that the military was prepared for war and received its blessings, and it was here where Frederick the Great was laid to rest.

Large parts of Potsdam remained in ruins after the war and efforts to rebuild it remained slow at best. Despite having burnt down to the ground and being a symbol of the aristocratic and militaristic Prussia of the past – the people decided to rebuild the church. Up until the mid 1960s, church services were held in the remnants of the tower, which at that point was made publicly accessible again. Walter Ulbricht (General Secretary of the SED), well-known for his anti Prussian and anti church stance – disregarded the publics affection for the church and ordered it demolished in 1967 as it was “disturbing the development of a socialist cityscape in Potsdam”.

The Rechenzentrum in Potsdam was designed and built by the Architect collective “Sepp Weber” for the VEB “Maschinelles Rechnen” between 1969 and 1971. The complex consisted of a Multistory building with offices and a building for large capacity computers. 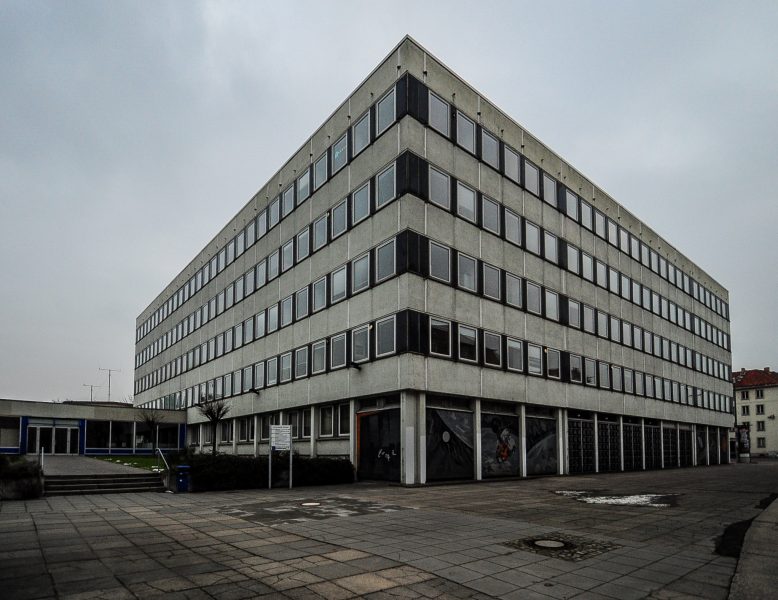 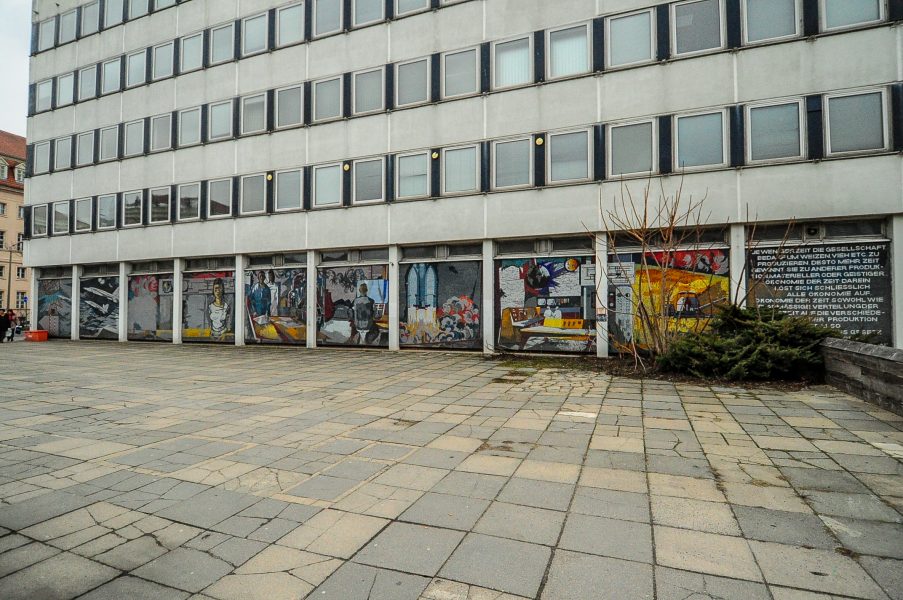 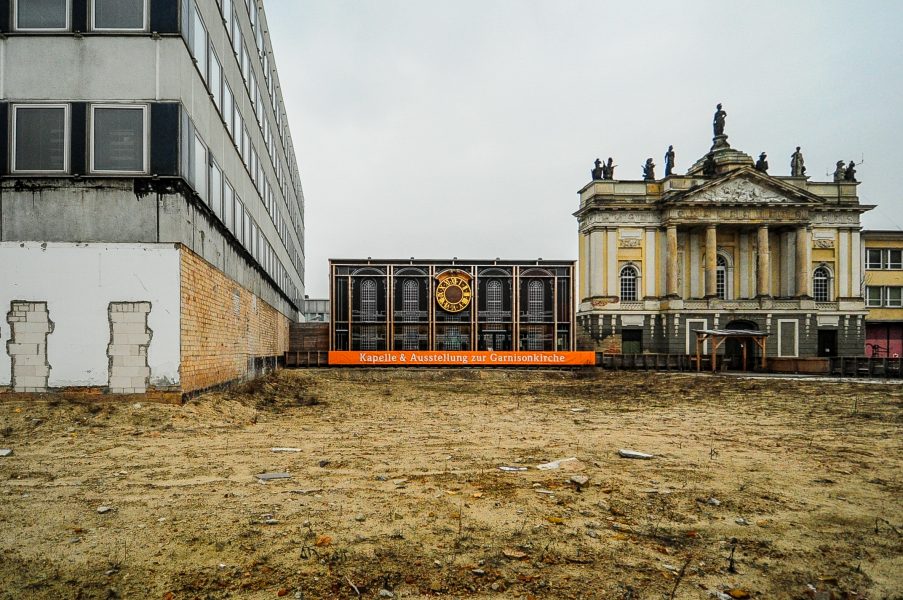 The Rechenzentrum was decorated with a large Mosaic known as “Der Mensch bezwingt den Kosmos” by Fritz Eisel, which wrapped itself around the entire building. The Mosaic consisted of 18 – 2,9 meters by 3,2 meter large images depicting the relativity formula by Einstein, the cosmos, scientists, spaceships, Juri Gagarin and an obligatory quote by Karl Marx:

“The less time the society requires to produce wheat, cattle etc., the more time it wins for other production, material or mental. Economy of time, to this all economy ultimately reduces itself. Society likewise has to distribute its time in a purposeful way, in order to achieve a production adequate to its overall needs.” 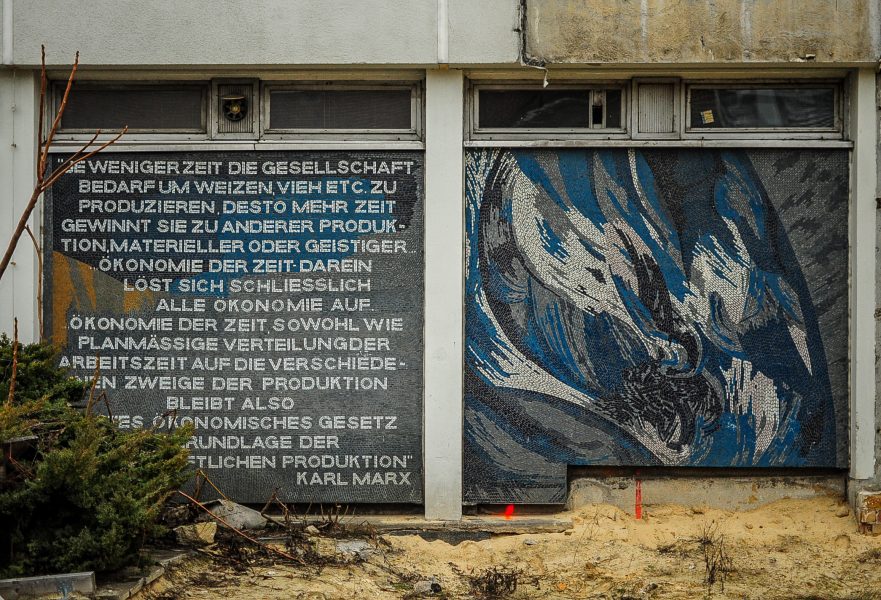 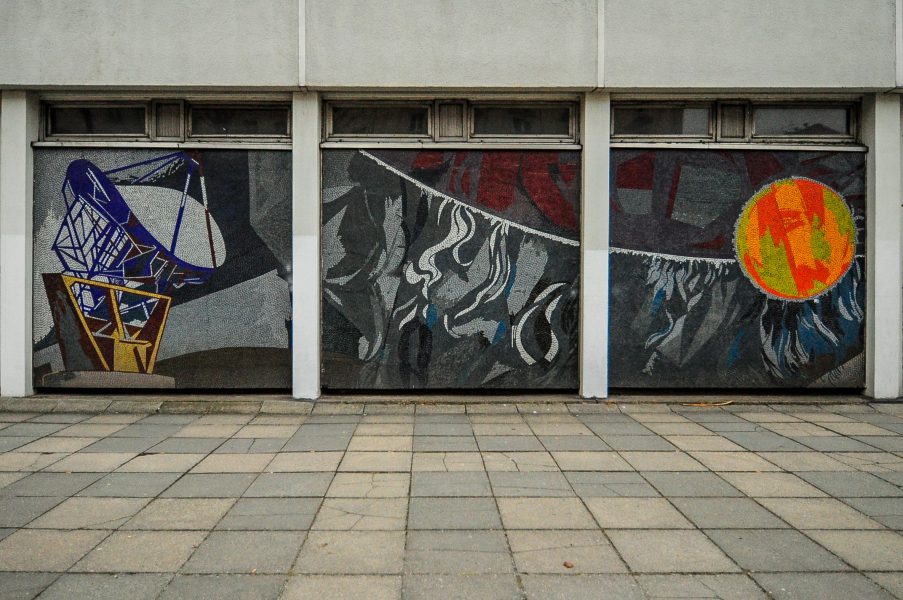 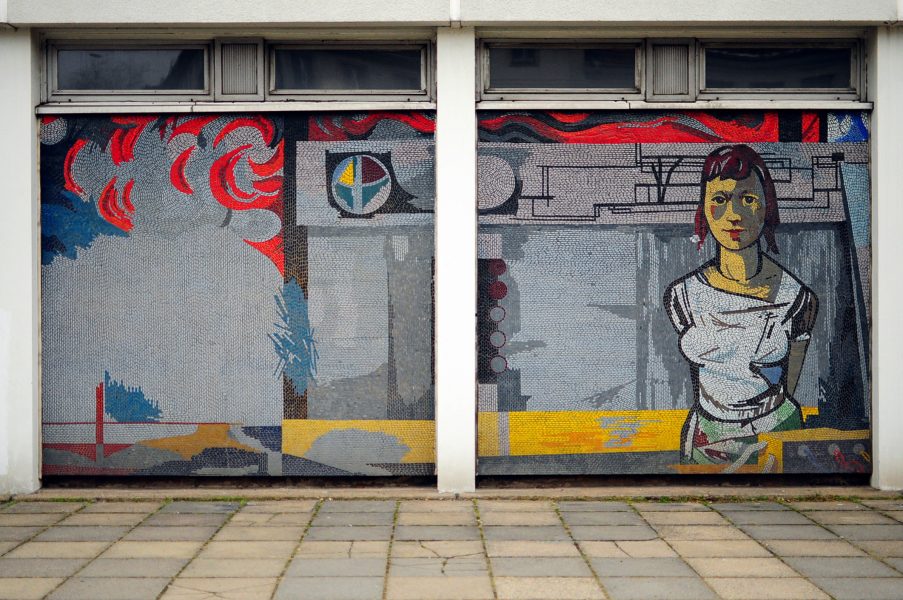 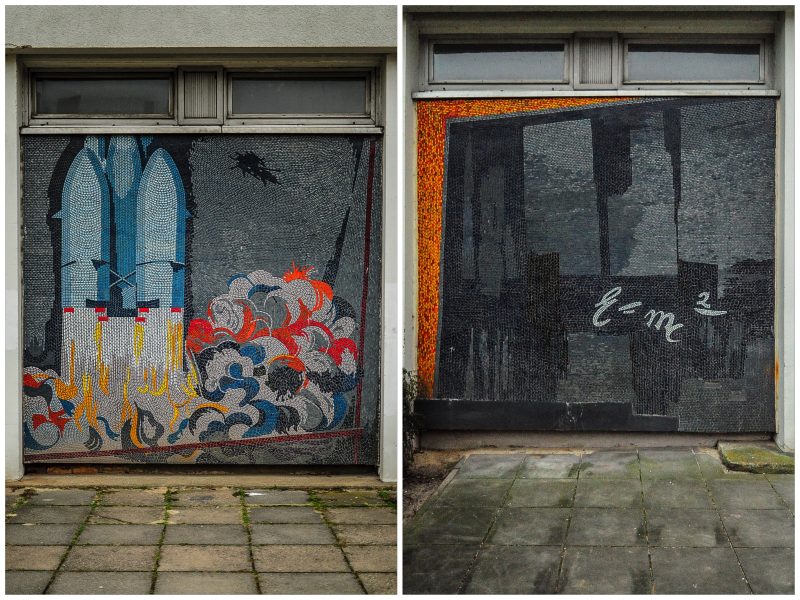 Fritz Eisel was one of the most influential painters and graphic artists in East Germany. Born in 1929 in Hessen, he joined the local Communist Party in 1946 and began work as a truck driver. In 1947 he applied and was accepted for a course at the University of Architecture and Fine arts in Weimar. He then transferred and finished his studies at the Dresden Academy of Fine Arts in 1951. He joined the German League of Visual Artists that same year – though he still felt under trained and decided to accept an offer to attend the Academy of Arts in Leningrad until 1957.

After 1957 he returned to east Germany and began working as a freelance artist (with a stint as a truck driver through Mongolia, India and Vietnam). In 1970 he took a teaching post at the Dresden Fine Arts Academy, where he obtained a professorship in 1973. In 1975 he was appointed Rector. After refusing to serve a third term due his objections to academic changes imposed by the state he moved near Schwerin and entered his most productive artistic phase . Aside from creating the Mosaic on the Rechenzentrum in Potsdam, he left his mark in form of a rare mosaic in Frankfurt Oder in 1960 named “Volkstanz” and another mosaic in 1984 in Hoyerswerda. Fritz Eisel passed away in 2010 in Langen Brütz.

And here’s a little trivia about Fritz Eisel. Fritz Eisel had 2 children – one of them being the author and Journalist Carla Kalkbrenner. You might recognize the last name – shes the mother of the famous DJs  Paul and Fritz Kalkbrenner. The more you know.

Even the DDR understood the importance of Computers and microelectronics – but there was a severe lack of funds as the state diverted cash earmarked for investments and technological innovation back into the state budget. To counteract this, the DDR siphoned off the remaining investment funds from other industrial sectors and pumped it into the Microelectronic Sector. Rigid 5 year plans and the general lack of inovation forced east german electronic firms such as the VEB Robotron and Mikroelektronik Erfurt to reverse engineer computer chips (with a little bit of help from the Stasi) but ultimately failed to keep pace with western innovation. This led to interesting consequences such as the renaming of the word Heimcomputer (home computers) to Klein Computer (small computers) as the state realized that the private demand could not be met with current production standards.

There was even a joke going around – that when the Politbüro came to the DVZ to compute the various outcomes and any possible obstacles for its 5 year plans, the computers came to the result that they should get rid of the Zentral Kommite.

And heres the little secret. It seems like when the Mosaic Panels of the Cosmos and the Cosmonaut (on the west side) were installed, the builders weren’t full paying attention as they had accidentally switched the position of the two outer panels and rotated one of them by 180 degrees. For the past 44 years, the slightly “abstract” cosmonaut mosaic has now been gracing the streets of Potsdam. It is somewhat strange though that in all that time – not even Eisel sought to correct the mistake. 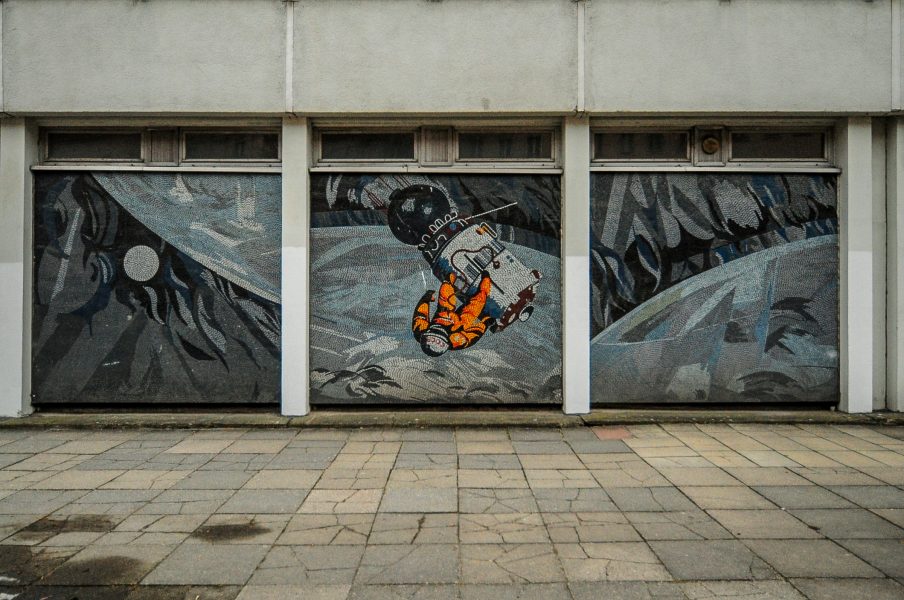 And this is how it was supposed to look like 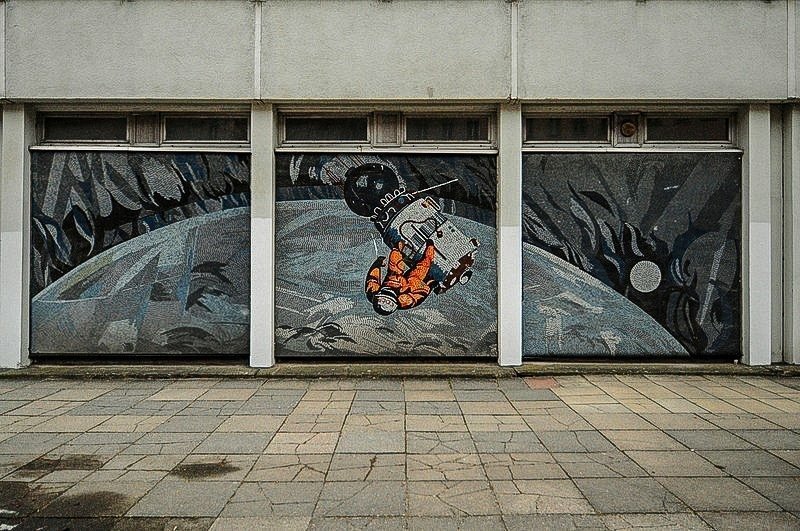 The Rechenzentrum in Potsdam survived German reunification and adapted. It upgraded its equipment and soon took on new profitable projects. But over time the company and the building became obsolete. The building has seen a host of tenants since then, most recently a gallery and a University Sports department. At this point Potsdam was more preoccupied with rebuilding its former Prussian glory – from Stadtschloß to Garnisonskirche.

And the Rechenzentrum was now in the way of the said Garnisonskirche. Plans were set in motion to tear down the building – but thanks to the engagement of locals and politicians, the city decide to save the mosaic from destruction. It was planned to relocate the Mosaic to a local sporting ground of a school, then over to a university campus. At the end of 2014 it seemed like the plans were final – and a demolition deadline of 2017 was set. 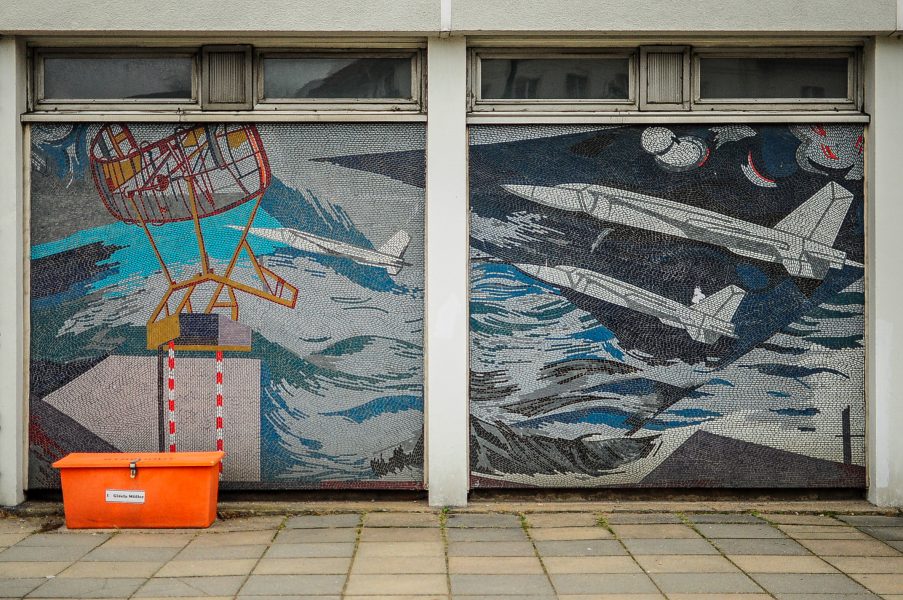 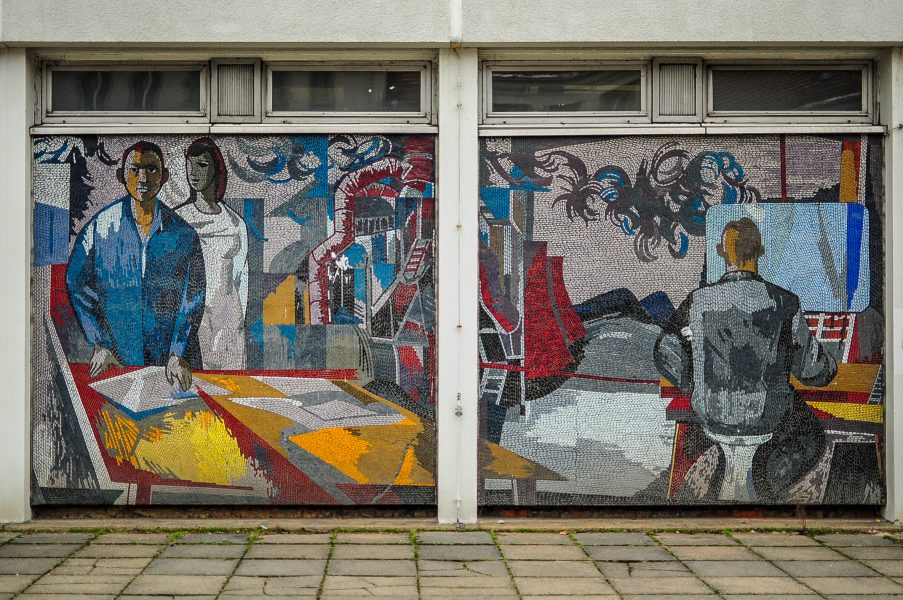 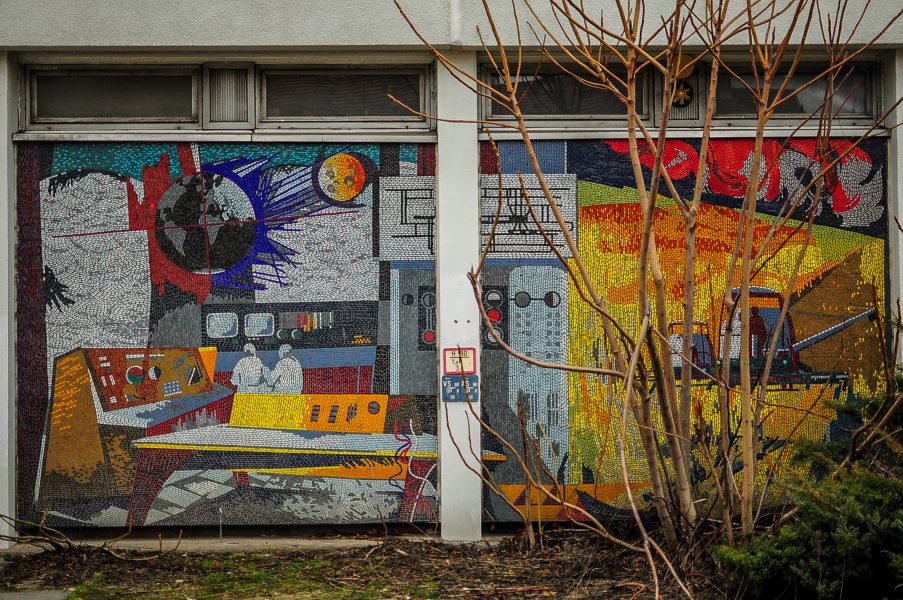 But as this is Germany, large-scale projects don’t seem to go according to plan. A massive debate broke out about the usefulness of a militaristic Prussian church and lengthy legal battles ensued. As of August 2015 – it seemed like a temporary compromise has been found. The Rechenzentrum – all 5000 sqm of it – would be rented out to artists and creative for the next 3 years. That means that the Prussian Garnisonskirche has 3 years to try and legally push through its constructions plans and demolish the DVZ. Or not. As soon as one “compromise” is found, another plan crops up. As of September 2015 the following options have come up:

So it seems like the city and all parties involved aren’t going to run out of time – or plans anytime soon. Where the mosaic will end up is up in the air, but for the foreseeable future it aint going anywhere.

Public Transport: Take the S-Bahn or Regio Train to Potsdam. From the Hauptbahnhof its a 10 minute walk. If you take the Bus (580/606), its just one stop but takes just as long.

*Despite trying to be as accurate as possible – the whole news surrounding the rebuilding of the Church are somewhat confusing/contradicting. If you’ve noticed a mistake – feel free to make me aware of it and ill correct the text.