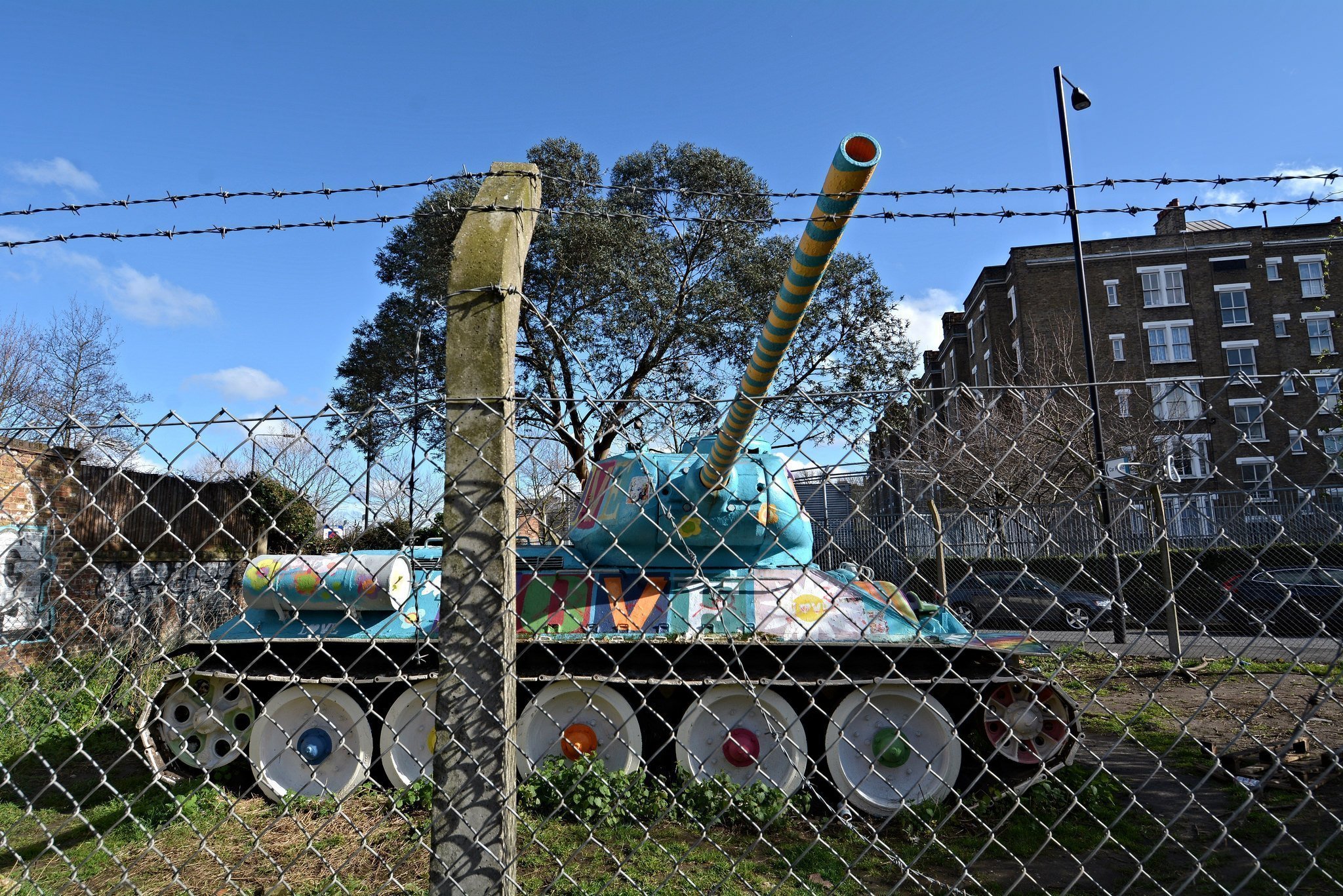 What to do in London when you’ve virtually seen everything? You go out looking for the obscure and weird. And it doesn’t get more weird than looking for an old Soviet T34 Tank in South London. So whats the story behind this soviet relic affectionately nicknamed Stompie (and often misspelled Stompy) parked on a vacant lot on Mandela Way in Bermondsey, London? 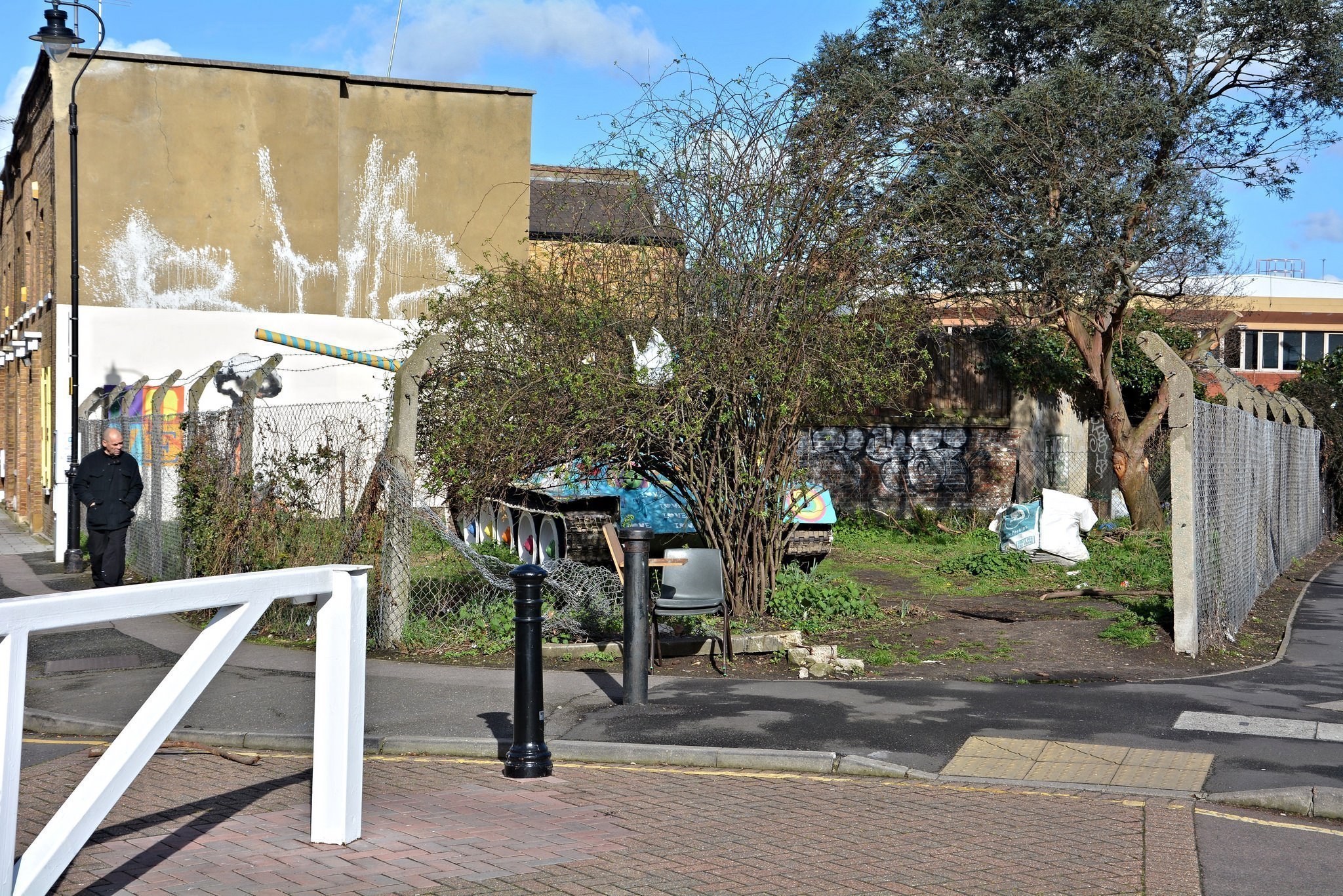 The Rumors go as follows: The  T-34-85 Battle Tank, which had seen action suppressing the spring uprising in Prague in 1968, was sold off along with other military stock after the Soviet Union crumbled. Around that point in time – in 1995 to be exact – Richard Loncraine was filming the movie “Richard III” (moving the time frame up from the 15th Century to a 1930s Fascist Britain) at the Battersea Power station and they needed some heavy military equipment. The fall of the communist empire couldn’t have come at a better time, because they managed to snap up the soviet tank.  Problem solved.

If you like abandoned soviet equipment – you should have a look at this abandoned tram in a forest on the outskirts of Berlin.

After filming had finished, the tank was sold off to a scrap /military salvage dealer – who then sold it to a man named Mr Russell Gray, a property dealer and military enthusiast for a mere £7,000 (adjusted for inflation that’s £12,600 today). 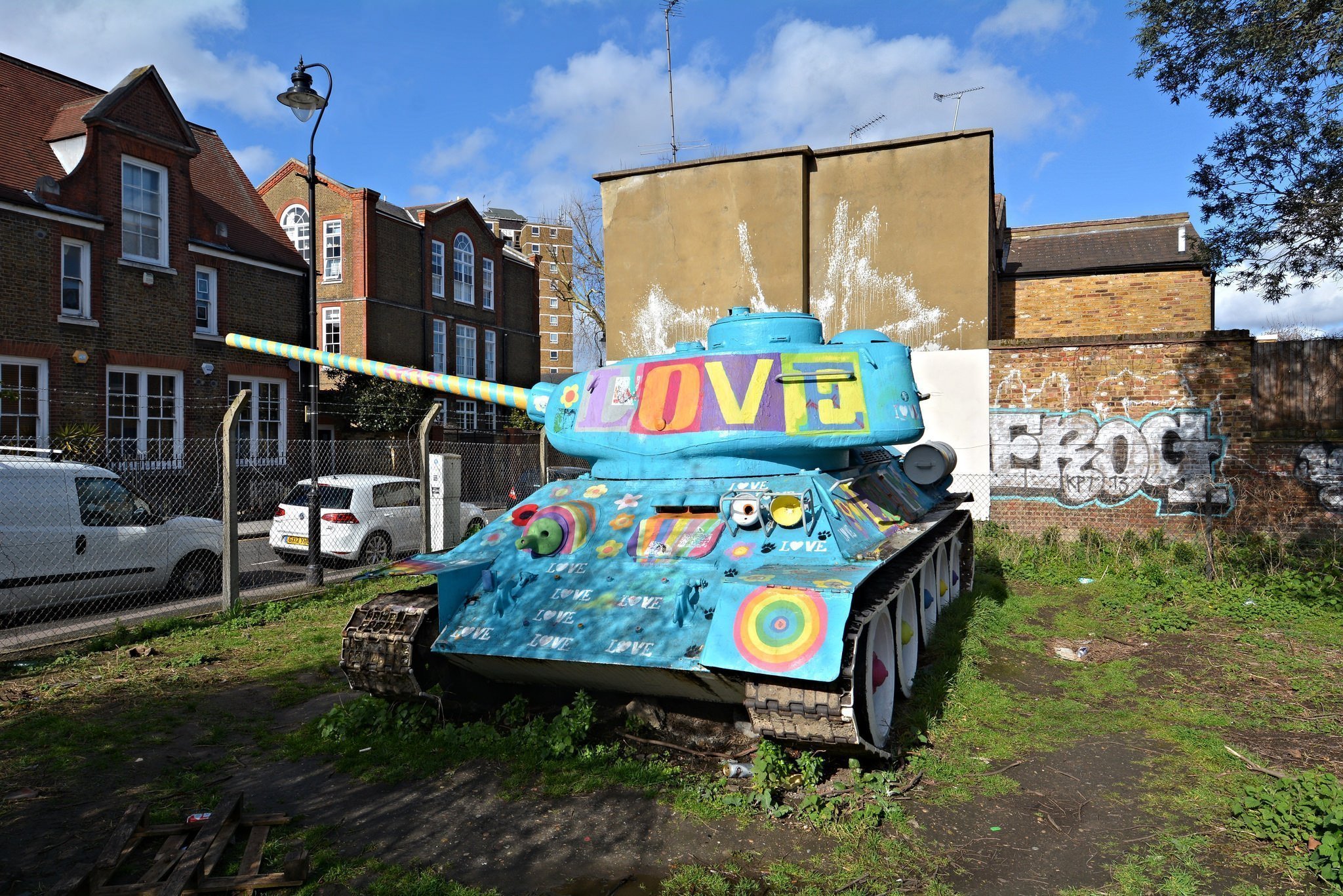 But why buy such a thing? Well he claims it was a birthday gift for his 7-year-old son. According to some though it was a cunning plan to annoy the local council. Mr Gray was denied the building rights on the plot of land that he owns by the local council, but they didn’t bar him from placing any vehicles on the land. As the rumor goes, which to be honest seems to be quite true as the tank is still there, Mr Gray applied again for planning permission, this time for a “Tank”. The council thinking he had meant a “septic tank” gave permission without delving into the mater any further, and thus he parked his 32 Ton Soviet Tank into a quiet London neighbourhood. The proverbial cherry on top of this story is that the turret now points in the direction of the council – though it looks more like its pointing into the living room of an unfortunate neighbour. 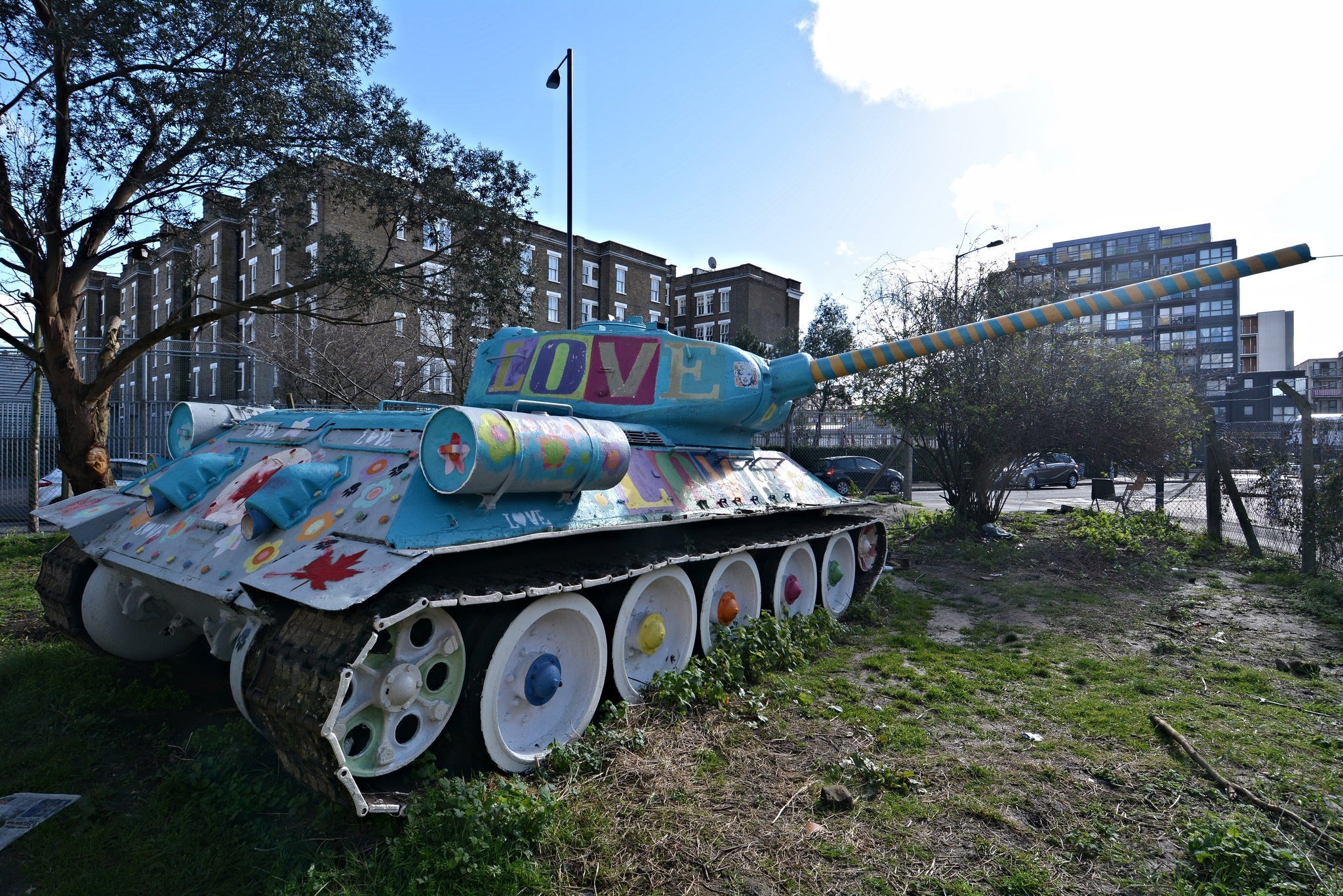 Stompies the name, annoying the council its game. But where did the name come from? The plot of land where the tank now stands is at the intersection of Mandela Way – and Mr Gray decided to name it in memory of Stompie Moeketsi, a young man murdered in 1989 by Winnie Mandelas (the former wife of Nelson Mandela) bodyguards dubbed the “Mandela United football club” after being accused of being a police informer.

Speaking of Police – have you heard of Londons Smallest Police Station? Quite an interesting story behind this little architectural gem on Trafalgar Square. 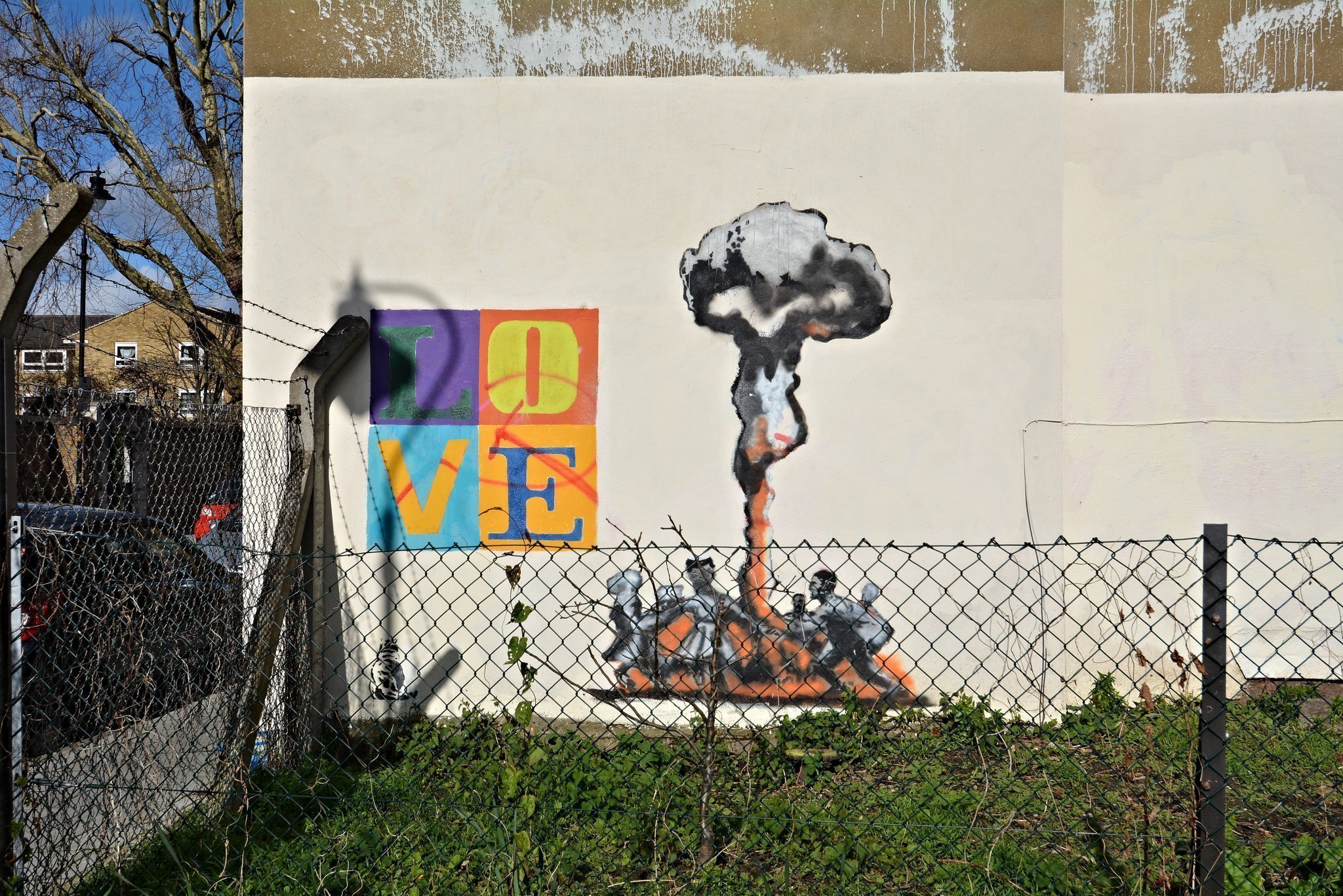 After over 20 years, Stompie the Tank still stands where it had been planted over 20 years ago. It now functions less as a playground for the son of Mr Grey, but more as an artistic canvas. The Tank was painted pink in 2002 by the artist Aleksandra Mir, and it seems like it gets a new funky design every year (along with a good coat of graffiti). If you’ve seen everything Londons got to offer, or just don’t feel like coughing up the cash for another overpriced attraction – head on down to Mandela Way and pay Stompie the Tank a visit.