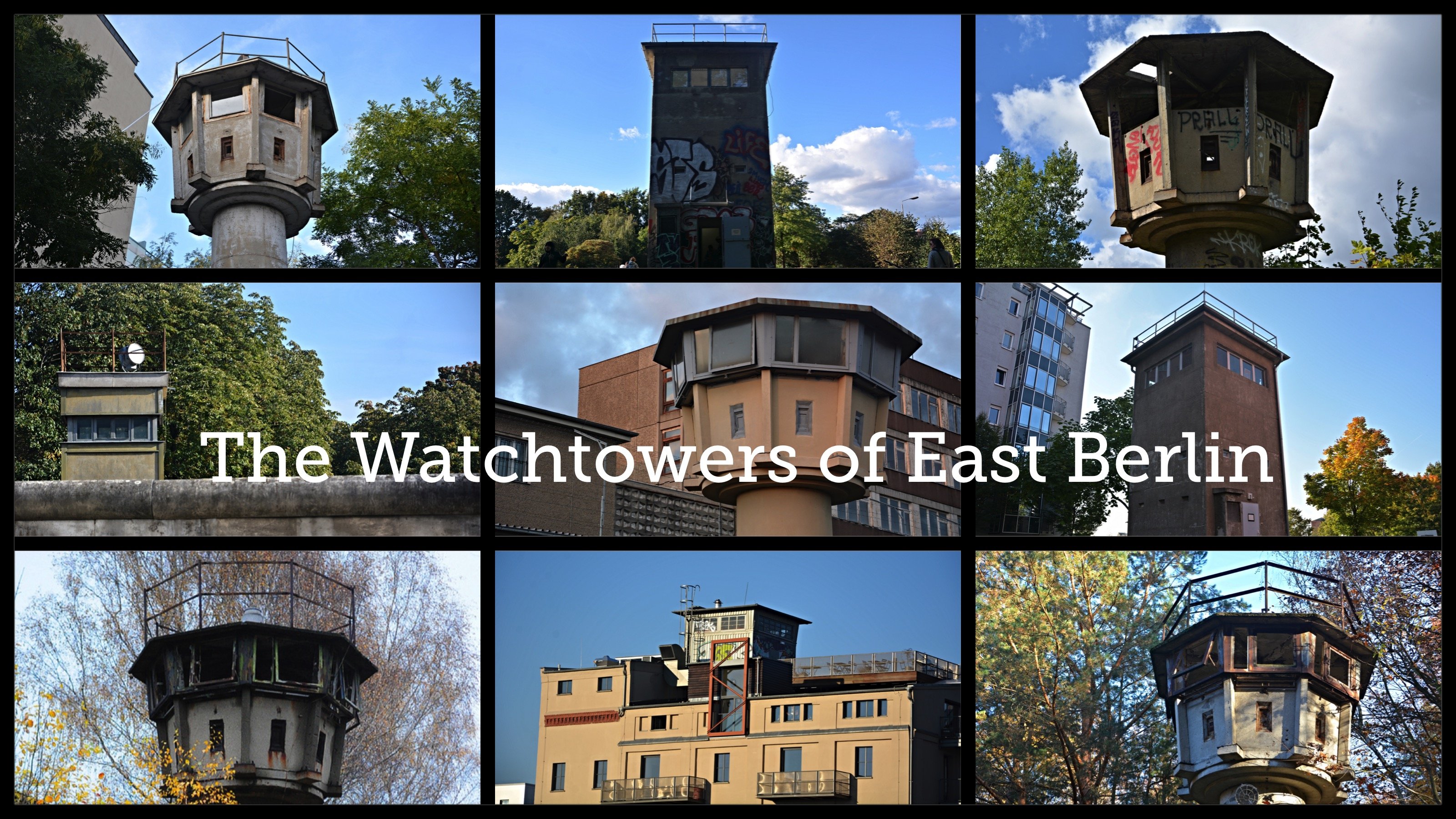 When the DDR erected the „Antifaschistischer Schutzwall“ – aka the Berlin Wall in 1961, the 160 Kilometer long fortification was overlooked by 302 Watchtowers. The East German Watchtowers weren’t only used for guarding the Berlin Wall, but served as Guard-posts for Prisons, Storage Facilities and a wide range of military facilities. As quickly as the Berlin Wall sprung up, it disappeared again – along with it the infamous towers. The wall came down so quickly and efficiently that today only roughly 1% of it has survived as a memorial – but what came of the Watchtowers that sprouted in East Berlin like mushrooms?

Much like the infamous Appartmentblocks (and the Berlin Wall) – The Watchtowers were constructed in a “Legoesque” fashion. Simple prefabricated blocks and segments that could easily be attached to each other to increase the structures size and length. They were designed and planed by the VEB Zentrales Entwurfs- und Konstruktionsbüro Berlin.

The Watchtowers were divided into 2 Categories:

The A-Turm (AT) was a 25 meter high Communications Tower, which was built throughout the entire GDR partially as a response to the national uprising in 1953.

The B-Turm (Beobachtungsturm – Observation Tower, BT), a series of observation towers varying in height and shape. The B-Towers designation ranged from BT 3 to BT 11, where the number designated the height of the Tower  – or more precisely the shaft of the tower (which also matched the number of prefabricated elements). So following that logic, a BT 3 Tower was 3 meters high, a BT 6 Tower was 6 meters high, and a BT 11 Tower was 11 meters high. The initial B Towers were all cylindrical, but later on both the BT 9 and BT 11 were constructed as square versions. Its been suggested that the switch from round to square for the larger towers was that they became relative unstable in unfavourable weather, so much so that the stationed soldiers weren’t permitted to man the towers during stronger storms.

B Towers generally consisted of a series of steel ladders that led up to a main observation deck. The deck consisted of a riffle rack, seating, signaling equipment, heating and emergency equipment. A small ladder led up to the roof which was equipped with a remotely operated search light and surrounded by a steel railing.

Another variation of the BT was the “FüSt” (Führungsstelle) or the BT 4×4. It was a square tower with a more generous floor plan of 4×4 meters (actually 4,2×4,2). Depending on the layout, the BT 4×4 had space for cells, sleeping compartments and an observation platform.

So what happened with the Watchtowers of East Berlin. Did any survive the sweeping winds of change? Unless they were repurposed by telecommunication companies (a fate reserved for A-Towers), almost all Watchtowers disappeared. Almost. Some were preserved as public memorials while others survived hidden in the ruins of the abandoned East German Industry.

A final note about the naming and classification of the Watchtowers. The topic is hotly debated amongst some users on the internet – some claiming that the number had nothing to do with the height of the Tower (or shaft) or the number of segments and vice versa. All documentation and all the people ive spoken to support the above stated explanations, but if anyone does have any information that might correct the text, then please let me know.

*While I aim to be as thorough as possible, this list might not be 100% complete. If you know of any other towers within “Berlins” borders drop me a comment below or shoot me an email.* 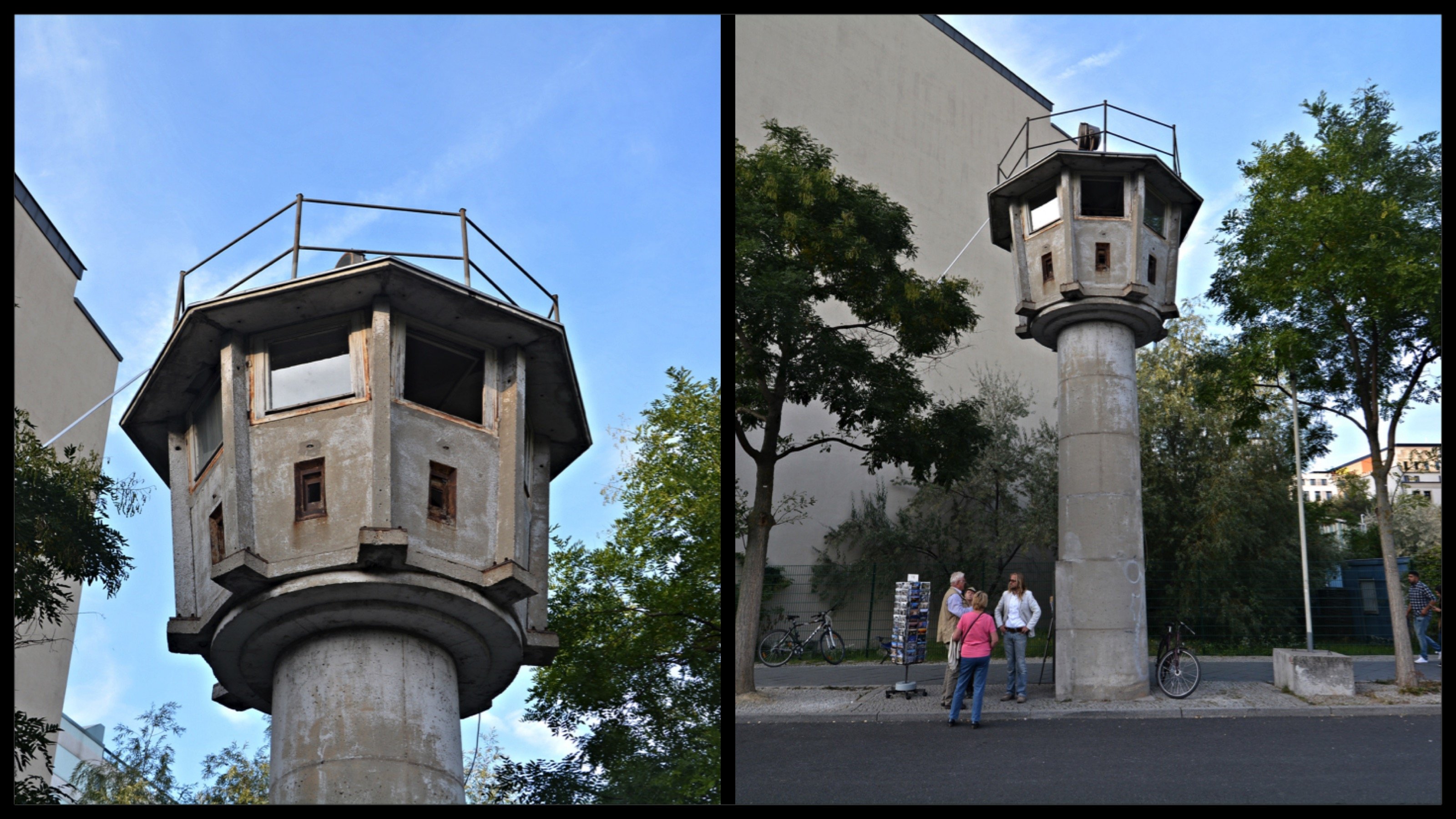 The Watchtower at Potsdamer Platz could be considered a Unicorn. It’s not the last tower of its kind, but it is the only BT-6 Tower that stood along the Berlin Wall that’s been preserved. Abandoned and derelict, it was left to rot until 2001 when it was put under “Denkmalschutz” (declared as a historic monument). The Tower is run as a “Museum” of sorts by a non-profit group, who restored it between 2011 and 2014. It’s publicly accessible on most days from 11:00 to 17:00 (unless it rains). To ascend to the observation deck, you’ll need to pay a donation of €3,50 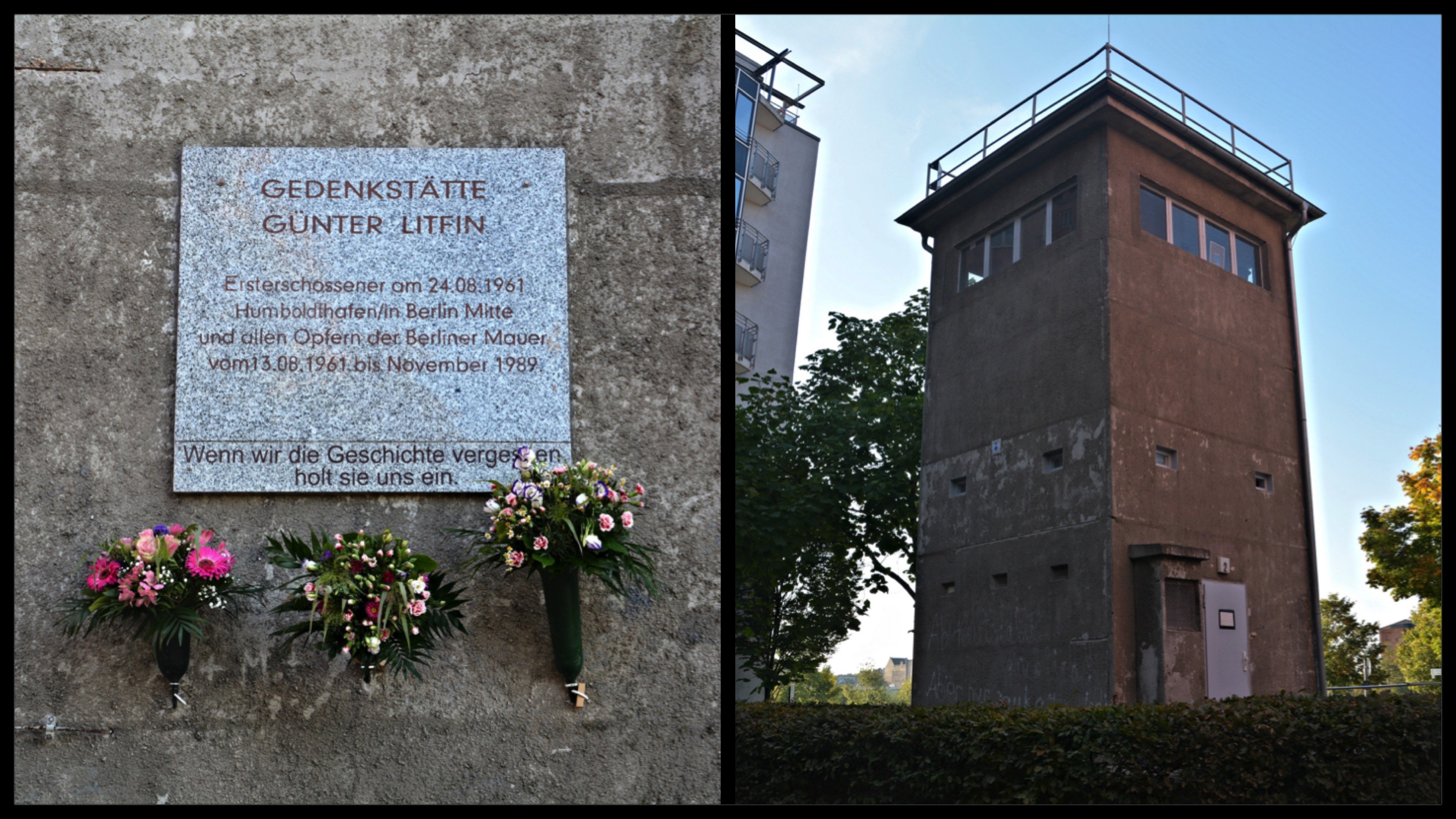 The Führungstelle Kieler Eck was part of the “Hinterlandmauer” – the wall behind the wall. It was a command tower in charge of coordinating the Watchtowers in the surrounding area. The “FüSt” Kieler Eck oddly enough survived the reunification despite being wedged in the courtyard of a building complex. In 1995 it was put under Denkmalschutz. Since 2003, its been transformed into a museum and memorial for Günter Litfin, who was shot and killed on the 24th of August, 1961 as he tried to escaped to West Berlin. He would be the first person to be murdered along the Berlin Wall. His brother Jürgen Litfin runs tours between March and October. Exact dates and times can be found on his Website. Tours are free, but you can leave a donation. 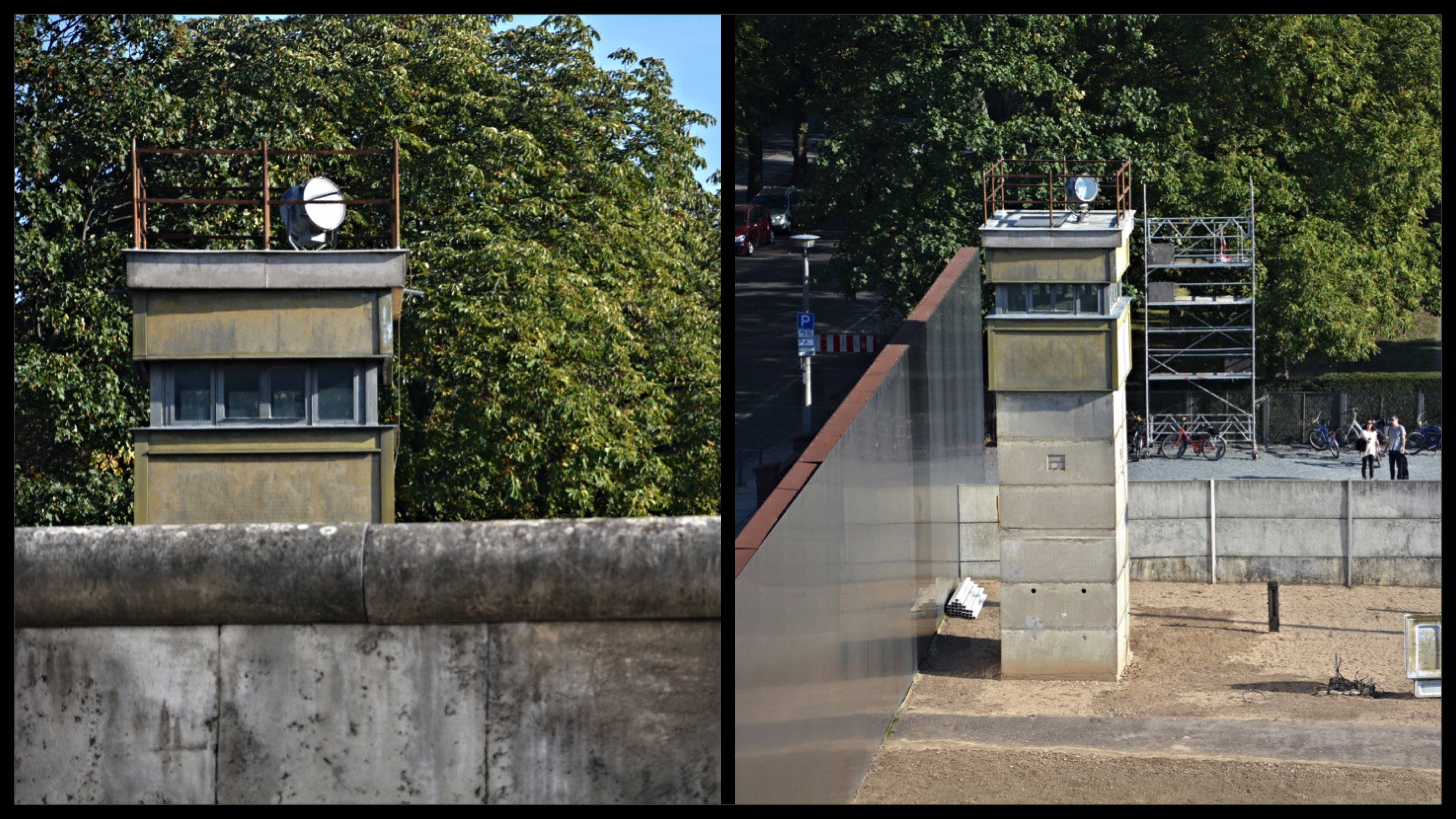 Until the fall of the Wall, 5 Watchtowers flanked the Bernauer Straße. The Towers were spaced out 250 meters apart from each other so that the Border Guards could optimally observe their segments and spot any possible escape attempts and movements in the West Sector.  The 1,4 km long section of the Wall was designated a memorial by the Magistrate of East Berlin on the 2nd of October 1990. After a call for submissions was put out in 1994, the new memorial was officially unveiled in on the 13th of August 1998. While the Tower at the Gedenkstätte Bernauer Straße is authentic, it originally stood at another location. It was dismantled and rebuilt at its current location in November 2009. You can see the tower from the observation platform across the street, but it’s not publicly accessible. The Visitor Center is open Monday – Sunday 10am to 6pm. The Exhibition is open from 8am to 10pm. Entry is free. For more information check out the memorials website. 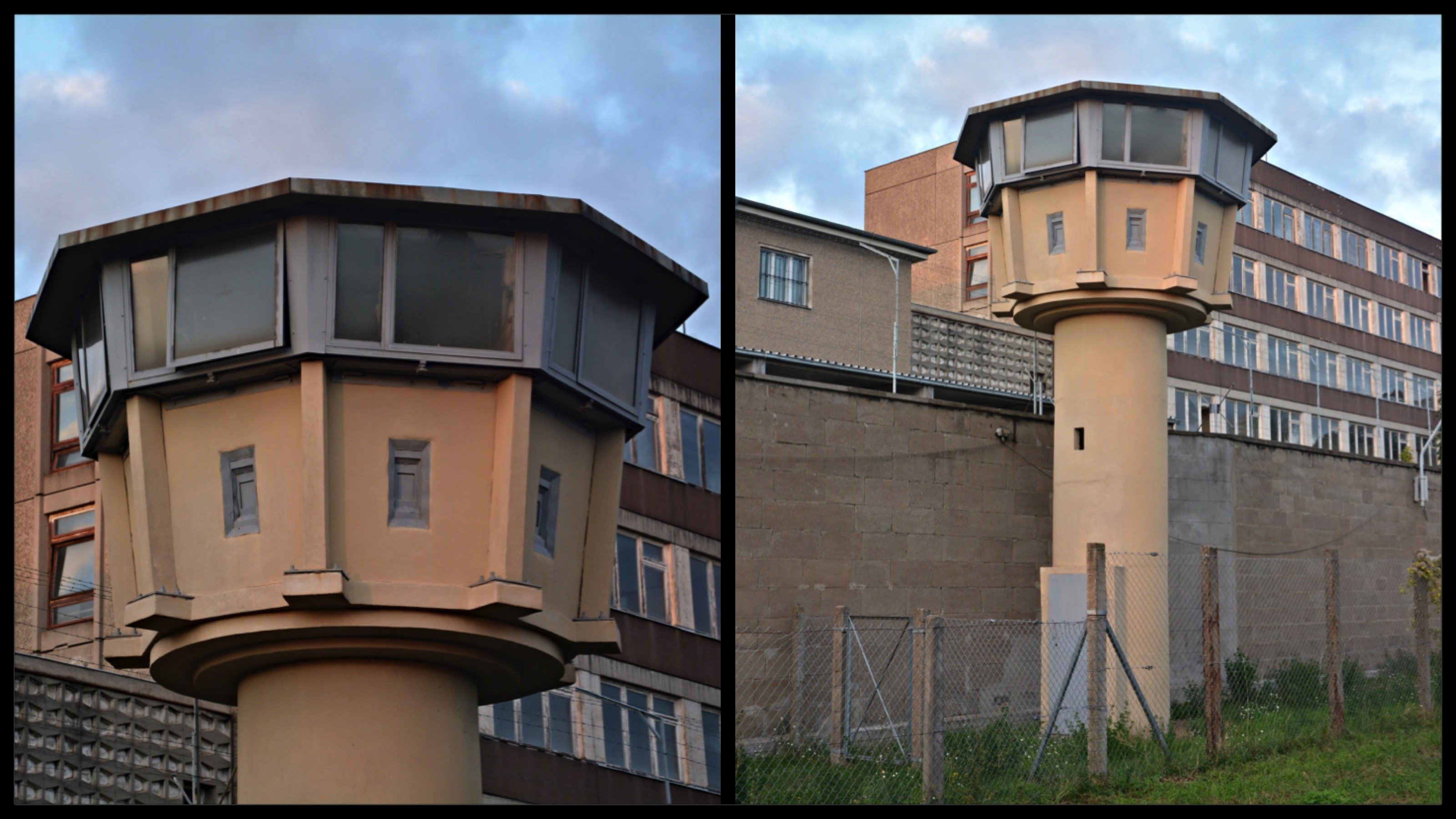 The predecessor of the Hohenschönhausen Prison – The Special Camp No.3 – was established in June 1945 by the Soviet Secret Police as a detainment and transit camp (over 20,000 people were processed and deported to other Soviet Camps from here). The Camp was shut down in 1946 (an estimated 3000 prisoners died will being held there), and was transformed into a Soviet Prison during the end of 1946.

The Compound was handed over to the East German Ministry of State Security (The Stasi) in 1951, who promptly reopened the prison and expanded it (by the use of forced labour). From 1961 onwards it was primarily used to house those who attempted to leave East Germany and Political Prisoners. The Prison was up and running until 1989, and officially closed on the 3rd of October, 1990. Hohenschönhausen Prison was one of the few establishments that wasn’t stormed after the fall of the wall, giving staff the opportunity to remove almost all traces of their illegal activities. The Prison was turned into a memorial in 1992 and officially opened in 1994.

The Gedenkstätte Berlin-Hohenschönhausen is open daily from 9am to 6pm. Entrance fees range from 1 to 5 Euros. For more information, check out their Website. 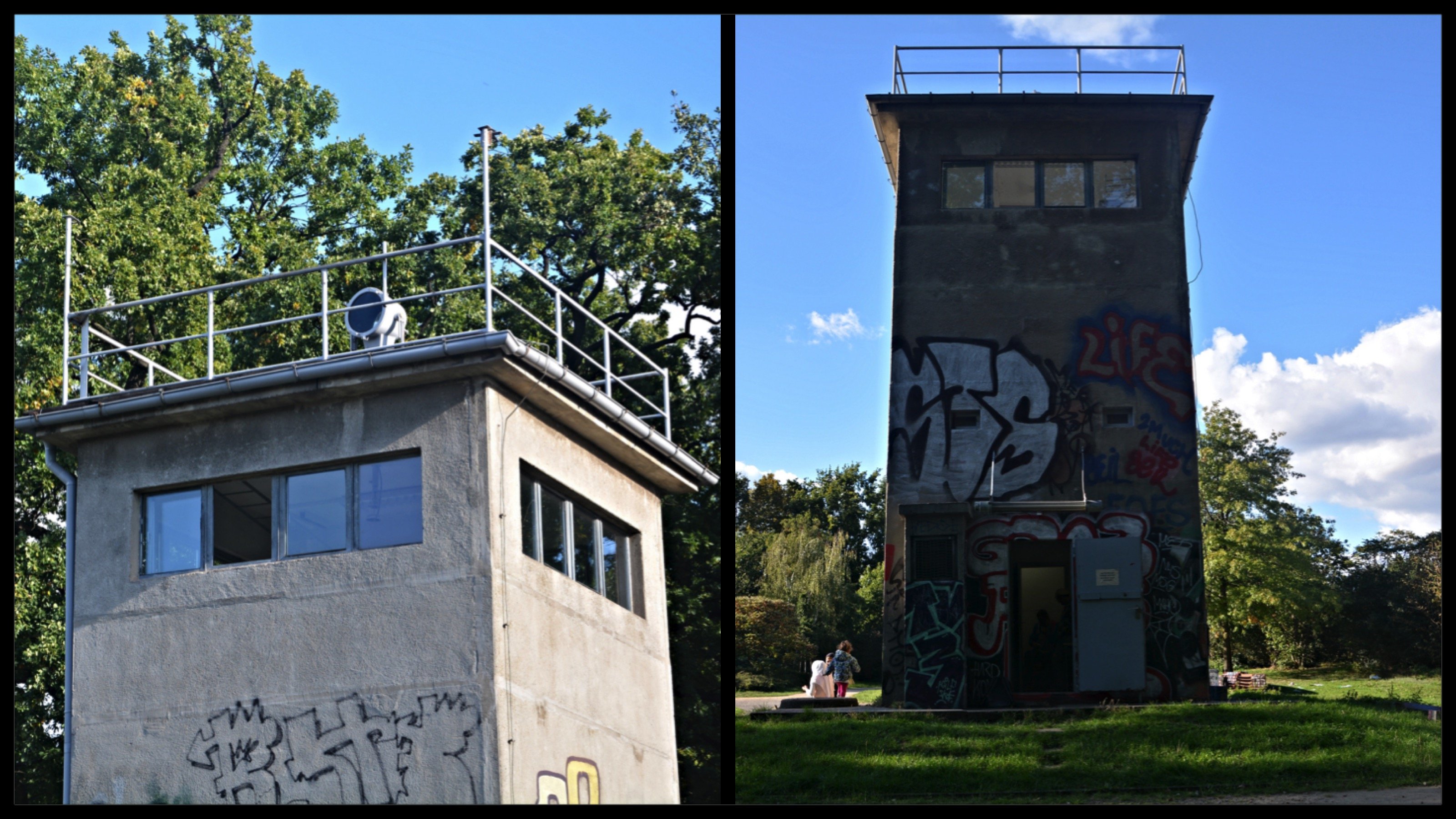 Built: Constructed in the late 1970s

The Wachturm Schlesischer Busch is one of the 3 Original (and sole) remaining Watchtowers along the Berlin Wall. When the border fortifications along Schlesischen Busch (where the Adlermühle, the largest Windmill in Brandenburg once stood)were upgraded in 1974, the “Grenzstreifen” – the border strip – was expanded to a width of 250 meters, and the former wire mesh fence was replaced with a concrete wall (the Hinterlandmauer). The Puschkinallee was transformed into a dead end street and a Führungstelle was erected. The four-story tower (10 meters) was in charge of coordinating 18 towers in the vicinity.  The Tower was occupied by the artist Kalle Winkler 3 days before border controls officially ceased (1st of July 1990), and transformed into the “Museum of forbidden Art”. The tower was given the status as a protected monument in 1992 and is now run by the Flutgraben e.V.  The Tower is open from March to October, Saturdays 11am – 2pm and Sundays 11am – 5pm. There is a suggested donation of 2 Euros (I think). For more information check out their Website. 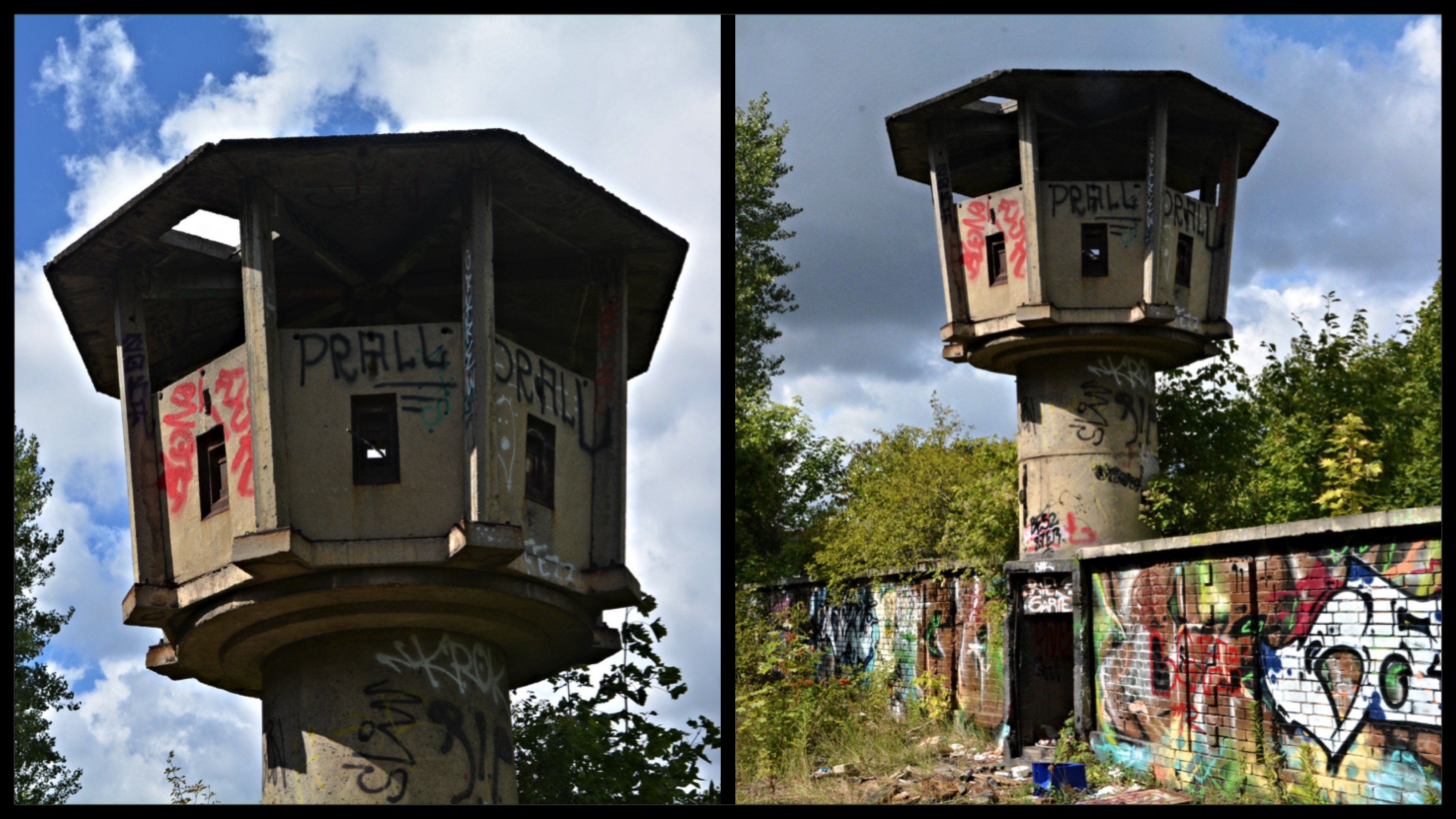 The Wachturm (or alternatively known as Postenturm) Neumagener Straße was built in 1970 on the grounds of the Hauptabteilung Personenschutz (HA PS). The Hauptabteilung Personenschutz was part of the Ministerium für Staatssicherheit – the infamous Stasi – and was responsible for the (physical) security of State and the Party Leaders, along with foreign dignitaries. After the fall of the wall and the dissolution of the DDR and its Ministries, the grounds were handed over to the district tax office. The Buildings are currently empty and the tower has been given the status as a listed building.
(H/T to AndBerlin for this one) 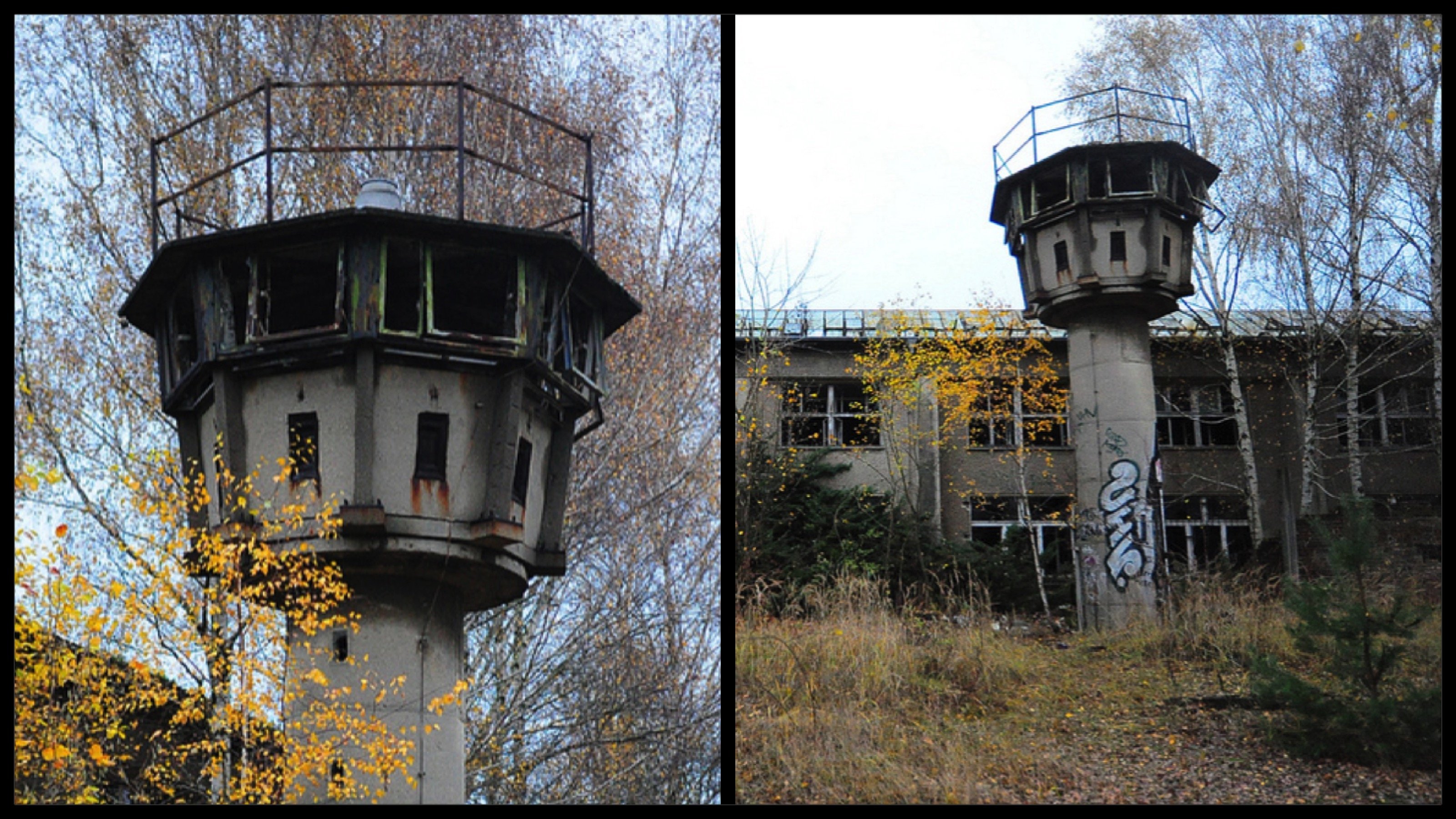 The VEB Kühlautomat was built partially on the grounds of Berlins first Airport – the Flugplatz Johannisthal. After the Airport was shut down, a factory specialising on the construction of Fridges and Cooling appliances opened up in 1950. It had been rumoured that the Watchtower was a remnant of the former Airfield and that it had previously functioned as a control tower – but the timing makes this seem rather doubtful. The factory survived german reunification, but struggled to stay commercial successful. The complex was shut down in 1996. For more photos and a more detailed history of the abandoned factory check out the post -> VEB Kühlautomat. 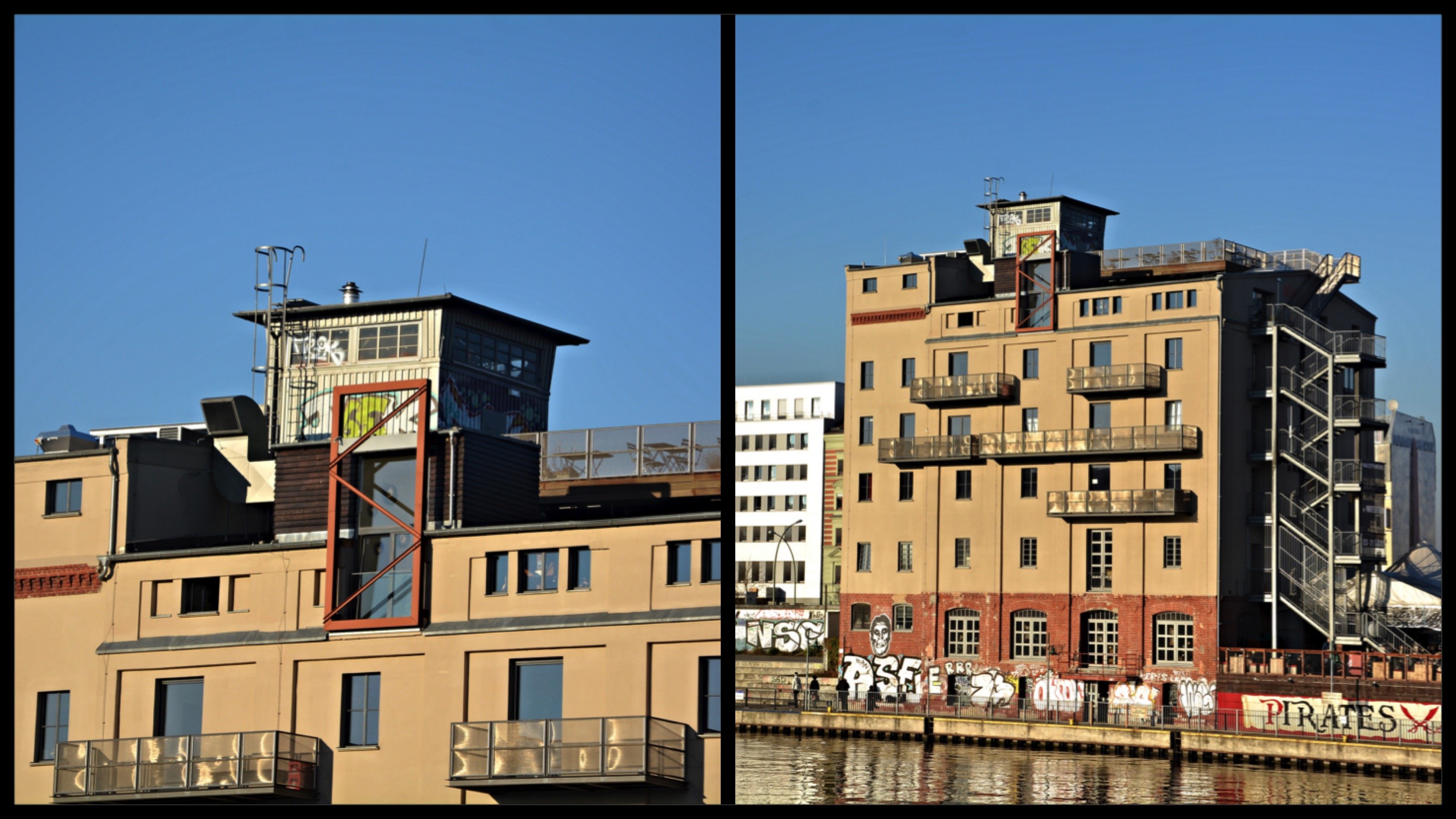 The Mühlenspeicher (Mill Silo) was built in 1907 for the Mill owner Karl Salomon. From 1910 to 1950 it served as the Grain Silo for the Mill across the street. Once the Berlin Wall sprung up, a Watchtower – hidden in plain sight – appeared atop the Silo. The Watchtower reamined there from 1961 to 1989. After the Wall came down the building was repurposed and now serves as a Club and Restaurant. 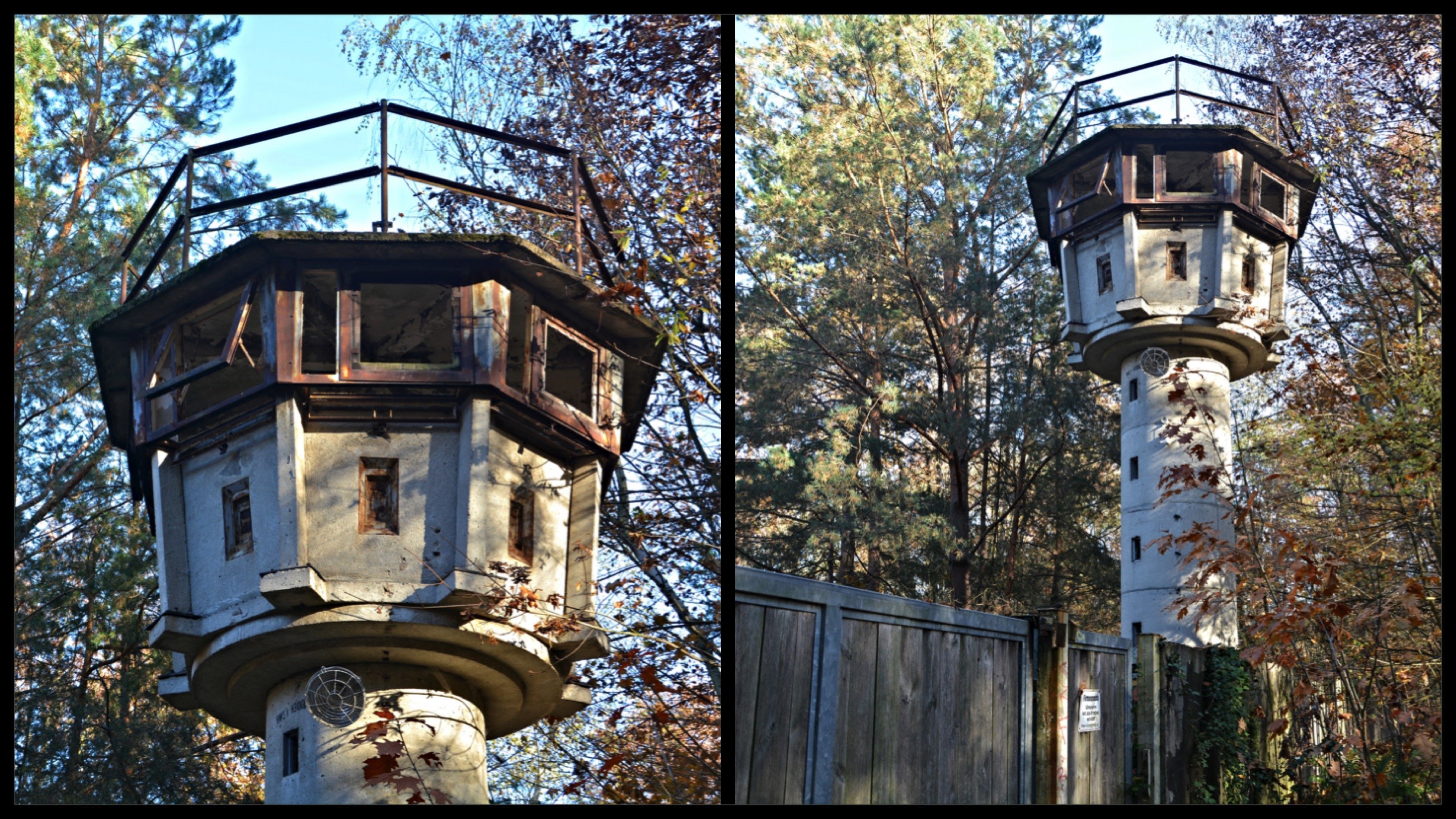 The Wachregiment “Feliks Dzerzhinsky” was a paramilitary organization and part of the armed organs of the GDR. It was founded in November 1954 and was subordinate to the Ministry of State Security of the GDR. It was named after Felix Dzerzhinsky, founder of the infamous Soviet secret police “Cheka”.

The Wachregiment „Feliks Dzierzynski“ was split into 5 Commandos, one of which was stationed just on the border of Berlin in Erkner. The Kommando 2 was resposnsible for guarding (amongst others): Waldsiedlung Wandlitz, Palast der Republik, and the “Gebäude des ZK der SED” (The Party Headquarters). The regiment was disbanded in 1990. The Barracks in Erkner were almost completely demolished with only a few buildings being repurposed. The remaining BT-6 Tower now guards a walled private parking lot.  Despite the Kommando being located in Erkner, the section of the base where the Tower stands is located in Berlin.

(Thanks to Frank R. for the tip)