In the middle of nowhere, accessible only through one treacherous country road split and cracked by the Sicilian sun lies the Ghost Town of Gibellina.  This place has many names – Gibellina Vecchia, il cretto di Burri or gli Ruderi di Gibellina, but it is most often referred to as ” Il Grande Cretto” – The Great Crack.

Dating back to the 14th Century, Gibellina – or as the Sicilians call it Gibbiddina – was a small city that was completely destroyed when an Earthquake rocked the Belice Valley on the 15th of January, 1986. Over 400 people were killed and 70,000 people from 10 townships were displaced from their homes in the valley. Instead of rebuilding their destroyed town, the residents of Gibellina decided to start anew 9km further down the road (depending on which source you read its either 7,9 or 20km from the old city).  According to a widespread “rumor” – Gibellina Nuova wasnt reconstructed at its new location because of its closers proximity to the newly constructed highway, but because the land the city now stands on belonged to 2 famous Mafia Bosses. 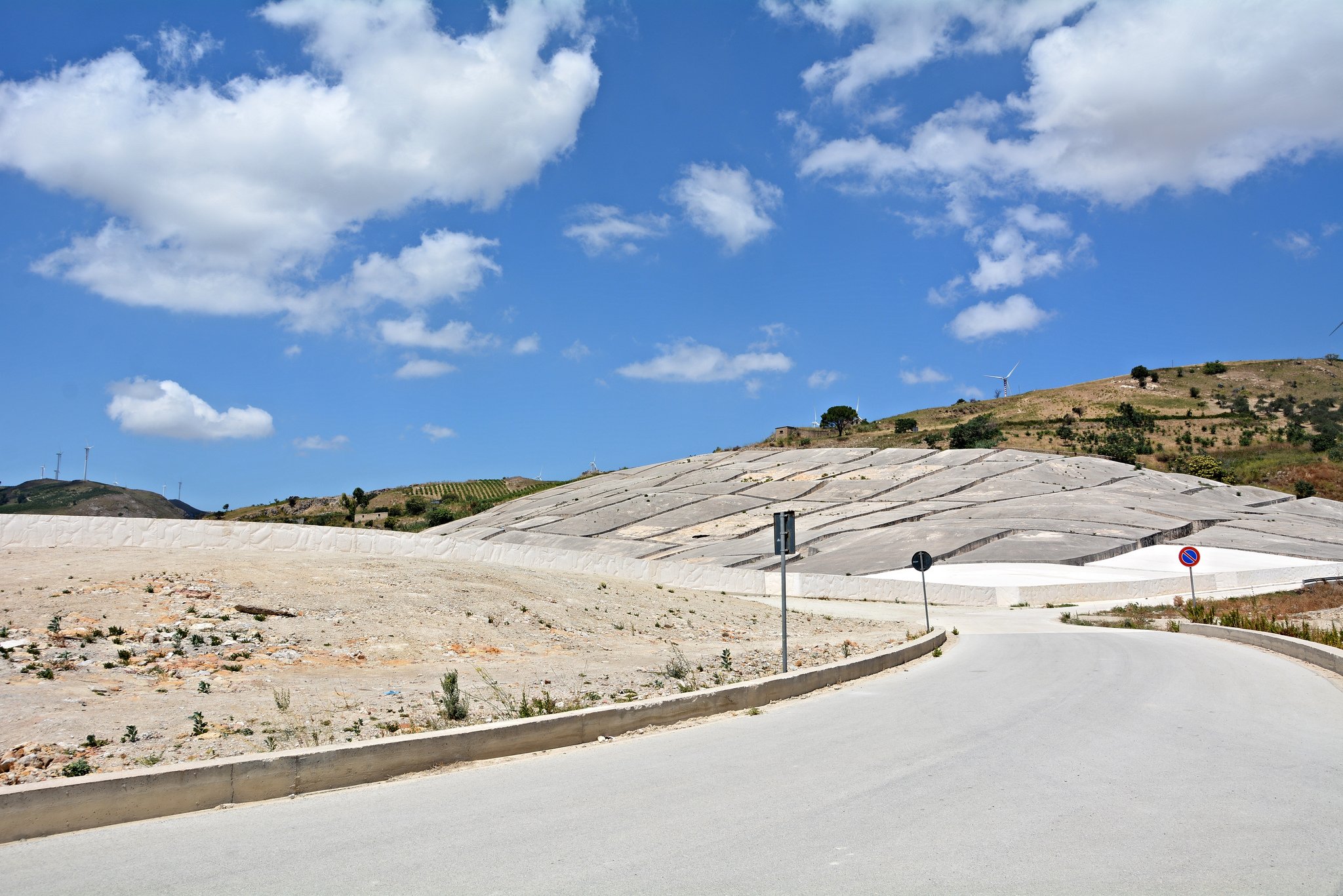 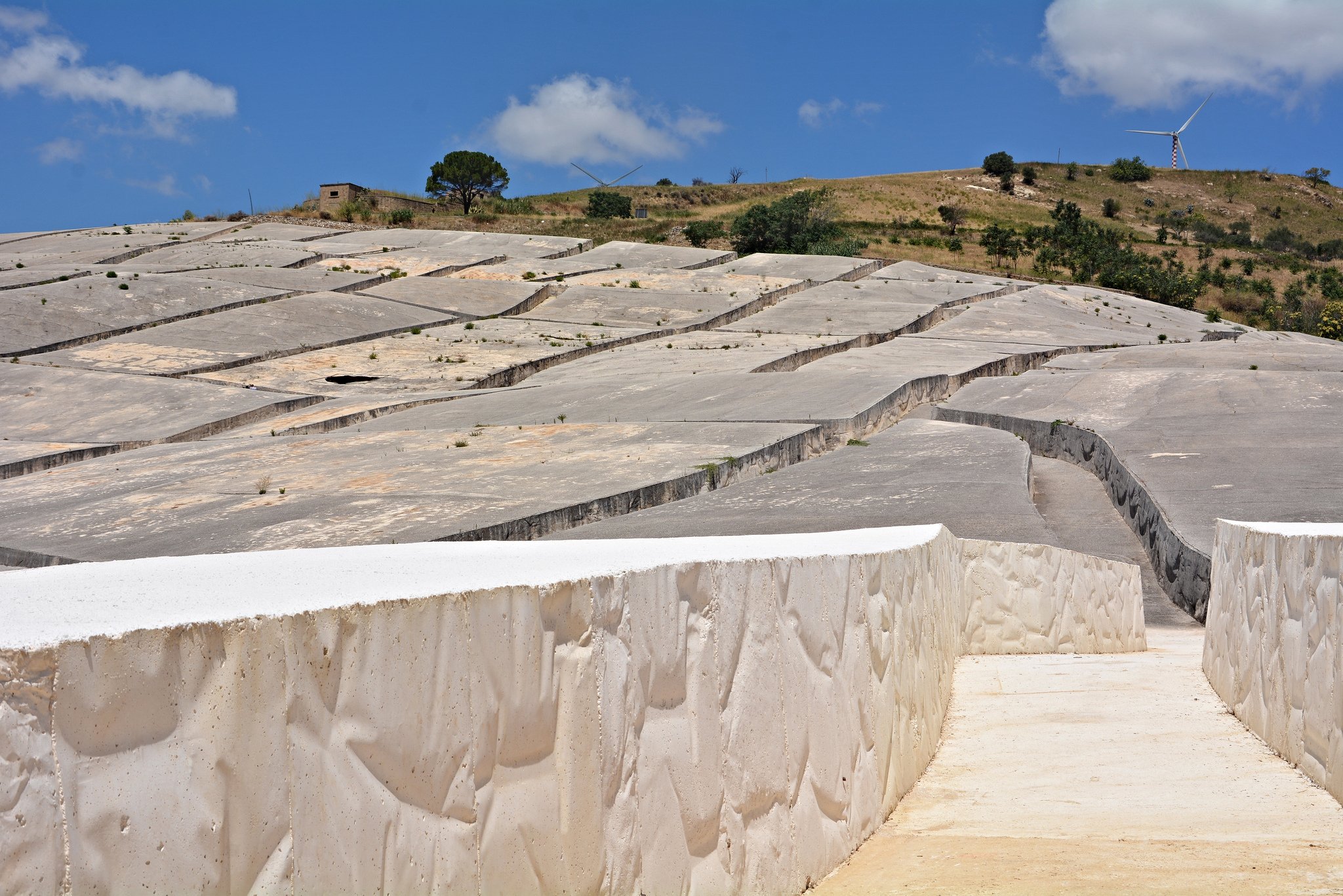 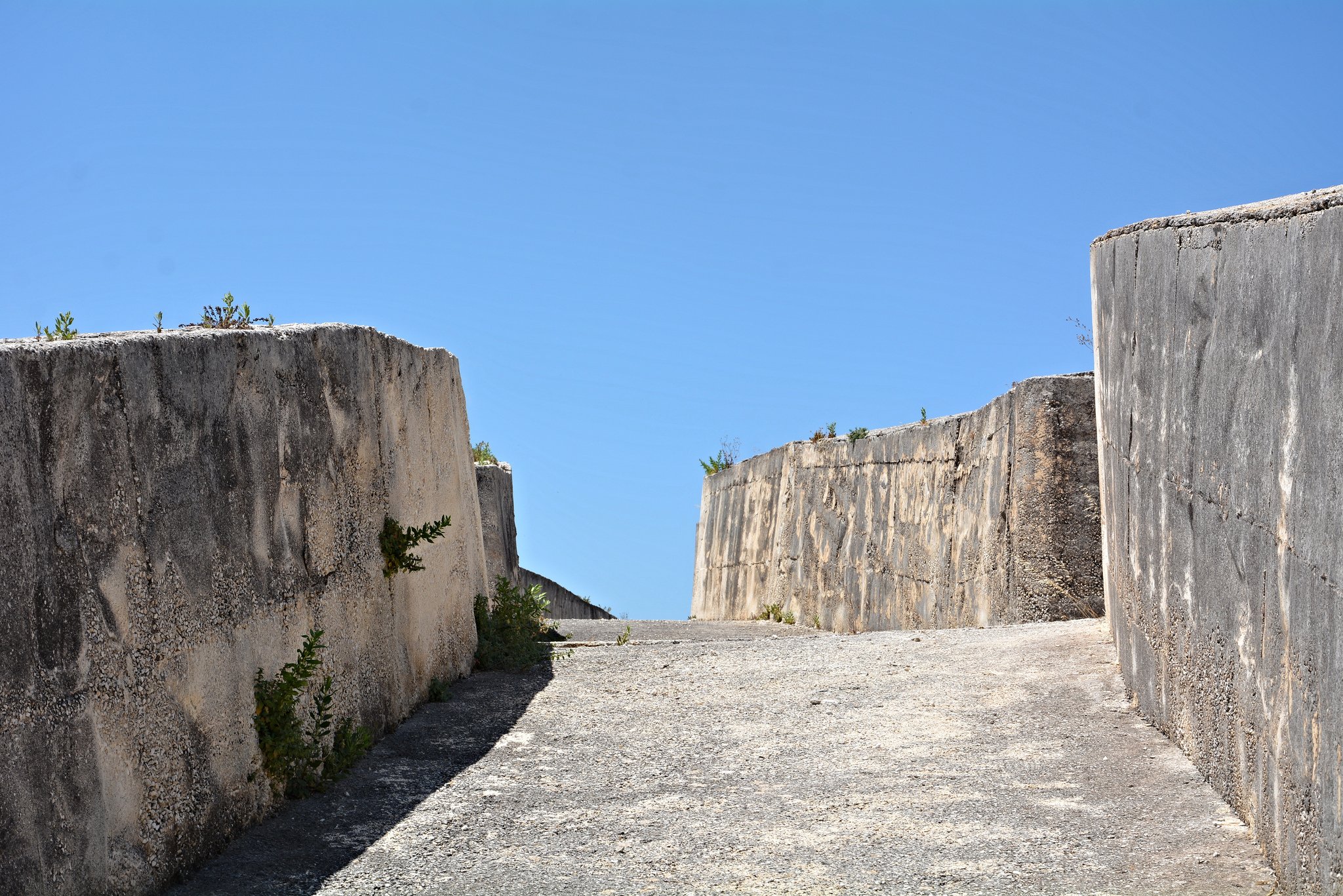 The Mayor of Gibellina Nouva (nobody said they had to be creative with their naming) had the idea that the city was to be rebuilt with the aid of Italys and Europe’s  most famous artists and architects. Artists such as Rob Krier, Oswald Mathias Ungers, Pietro Consagra, Arnaldo Pomodoro, Renato Guttuso and Joseph Beuys descended on the city turning it into a vast playground for artistic and experimental planning. You can imagine how this ended. Though Gibellina Nouva now boasts the highest density of modern art in all of Italy – the town is a shadow of its former self. The residents never really took to the “artistic” concept, the architecture was too alien and modern for a rural Sicilian town. This coupled with the extremely delayed reconstruction drove many former residents to leave the city. Latest reports state that several segments of the city are empty, and many of the buildings and artworks haven fallen into disrepair (much like many other historical buildings such as the abandoned Tonnara del Secco). 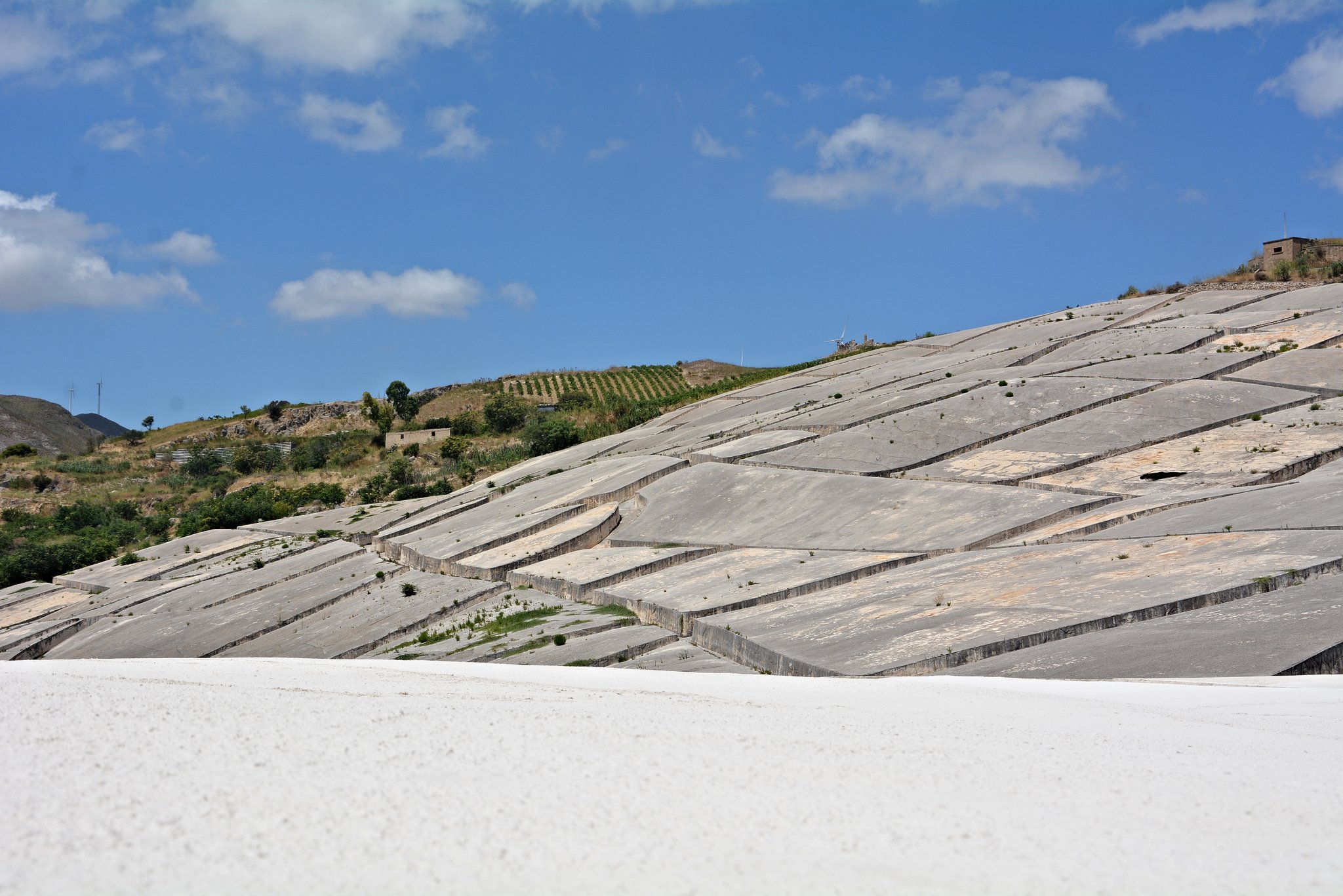 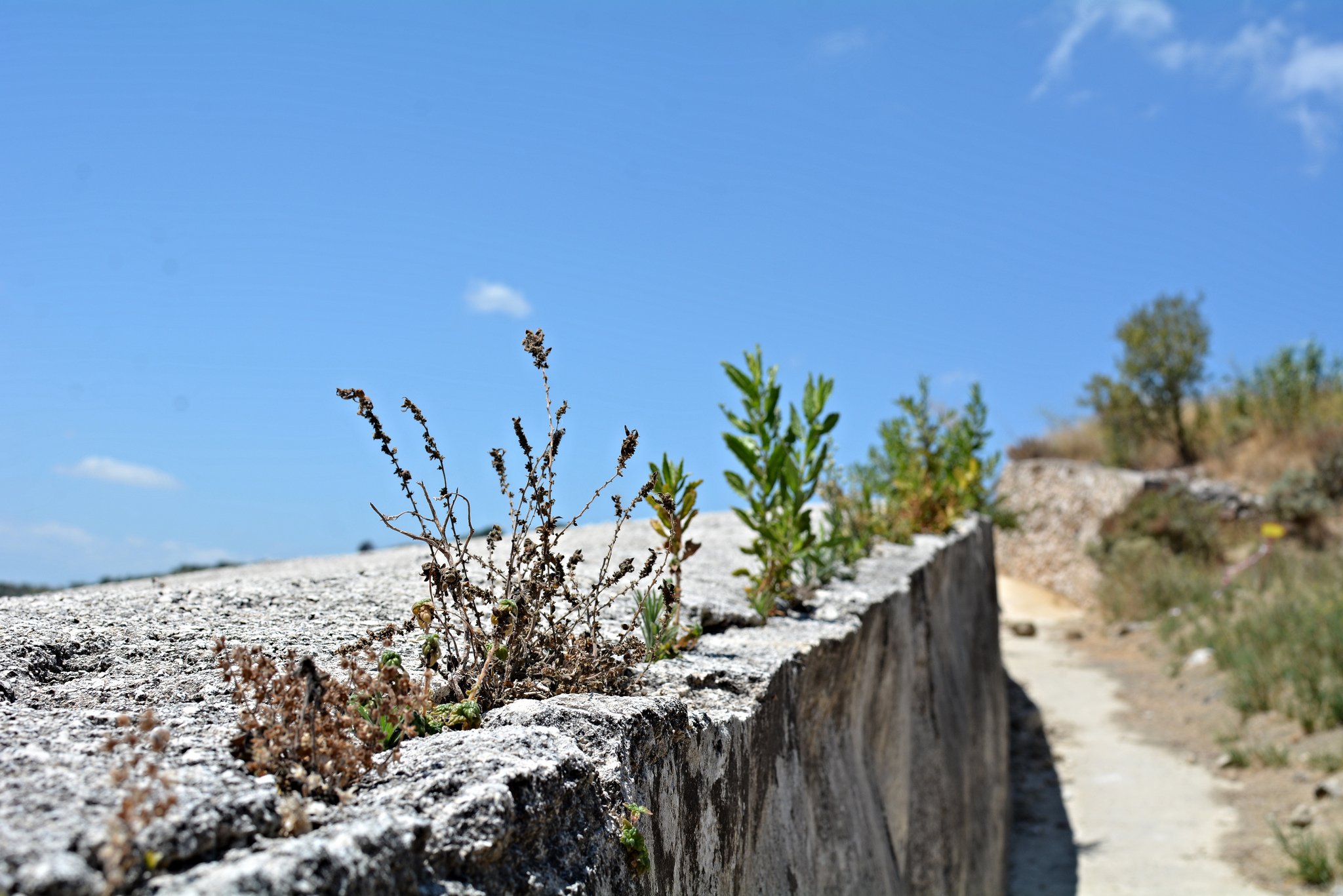 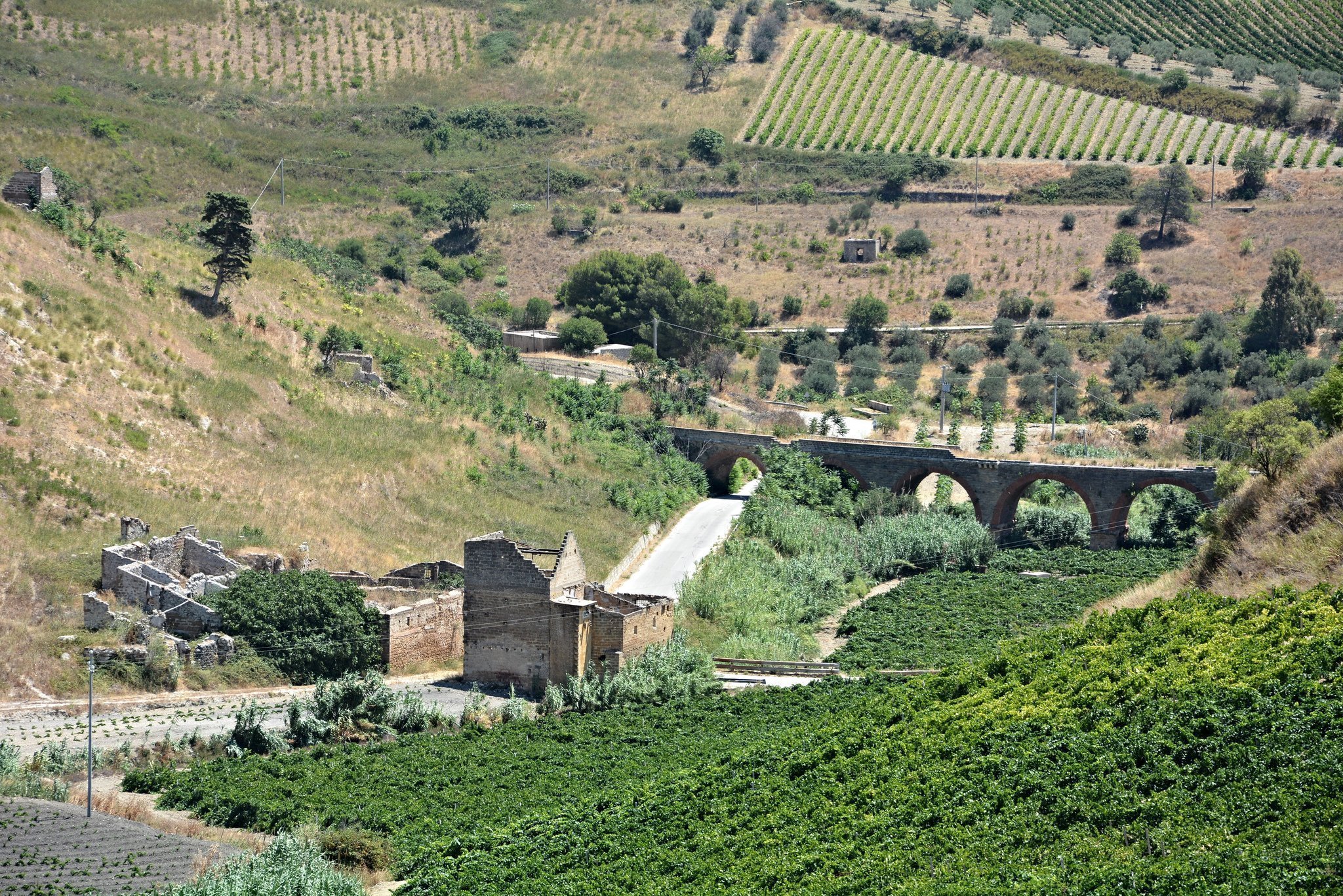 And what came of Gibellina Vechia – the abandoned ruins in the Sicilian hills? Today the Hill where the town once stood is a concrete sea of grey and white.  The artist Alberto Burri decided to visit the region in the late 1970s, and as the newly constructed city was almost complete and filled with (art)works, he ventured out to the ruderi di gibellina. Here he found the inspiration for his piece -Il cretto di Burri.

His idea was to remove all the ruins and rubble and fill the former outlines – or cracks – of the buildings with white concrete. This way the rubble would be removed and he would have created an eternal reminder of this tragic event.

“Above all – strength like history had to emerge from the comparison of the great civilizations of Segesta, Selinunte, Motia and the ruined world of the poor and the dead.”

He defined his work as “the archaeology of the future” which would be a testimony to the continued presence of great civilizations in this land. 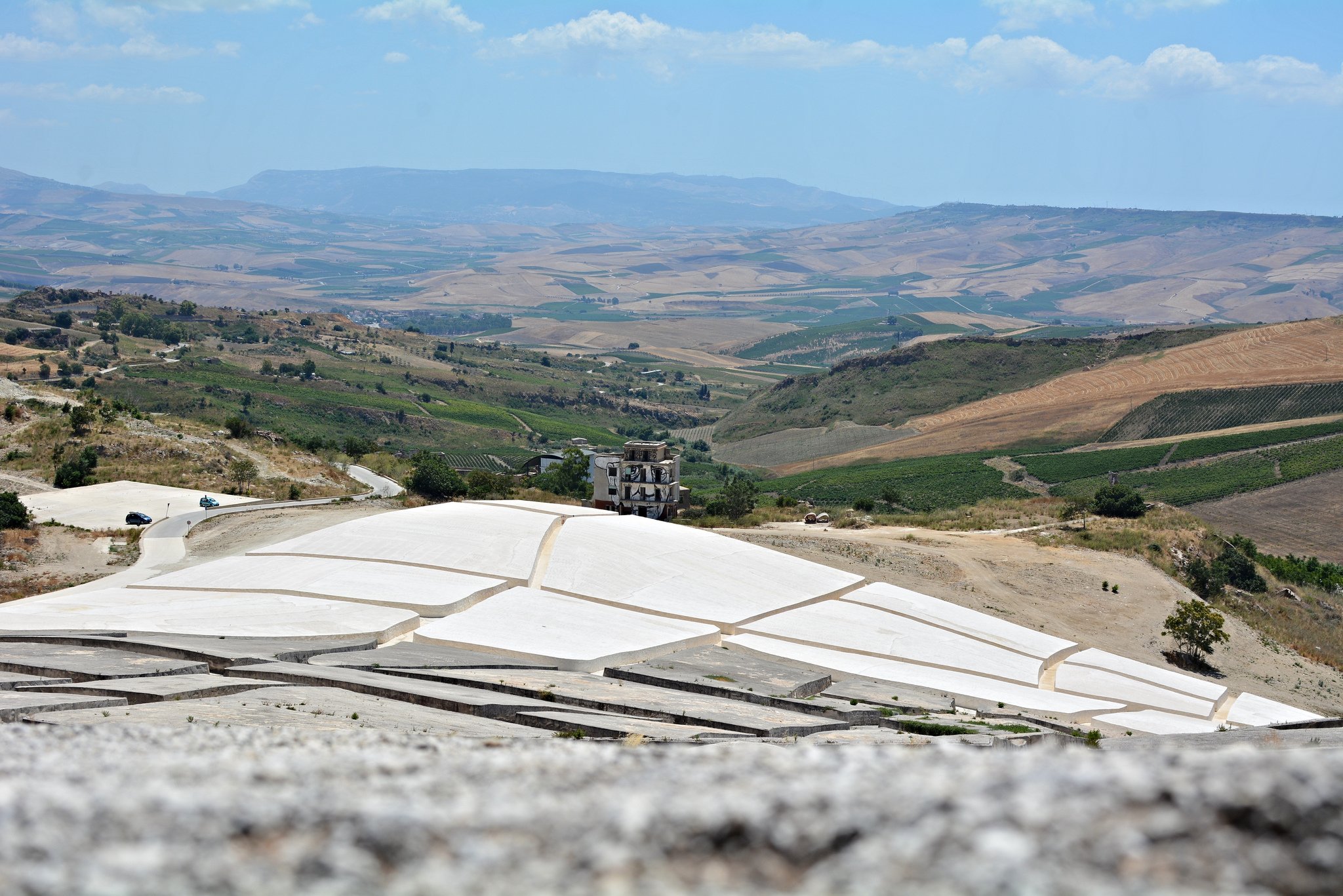 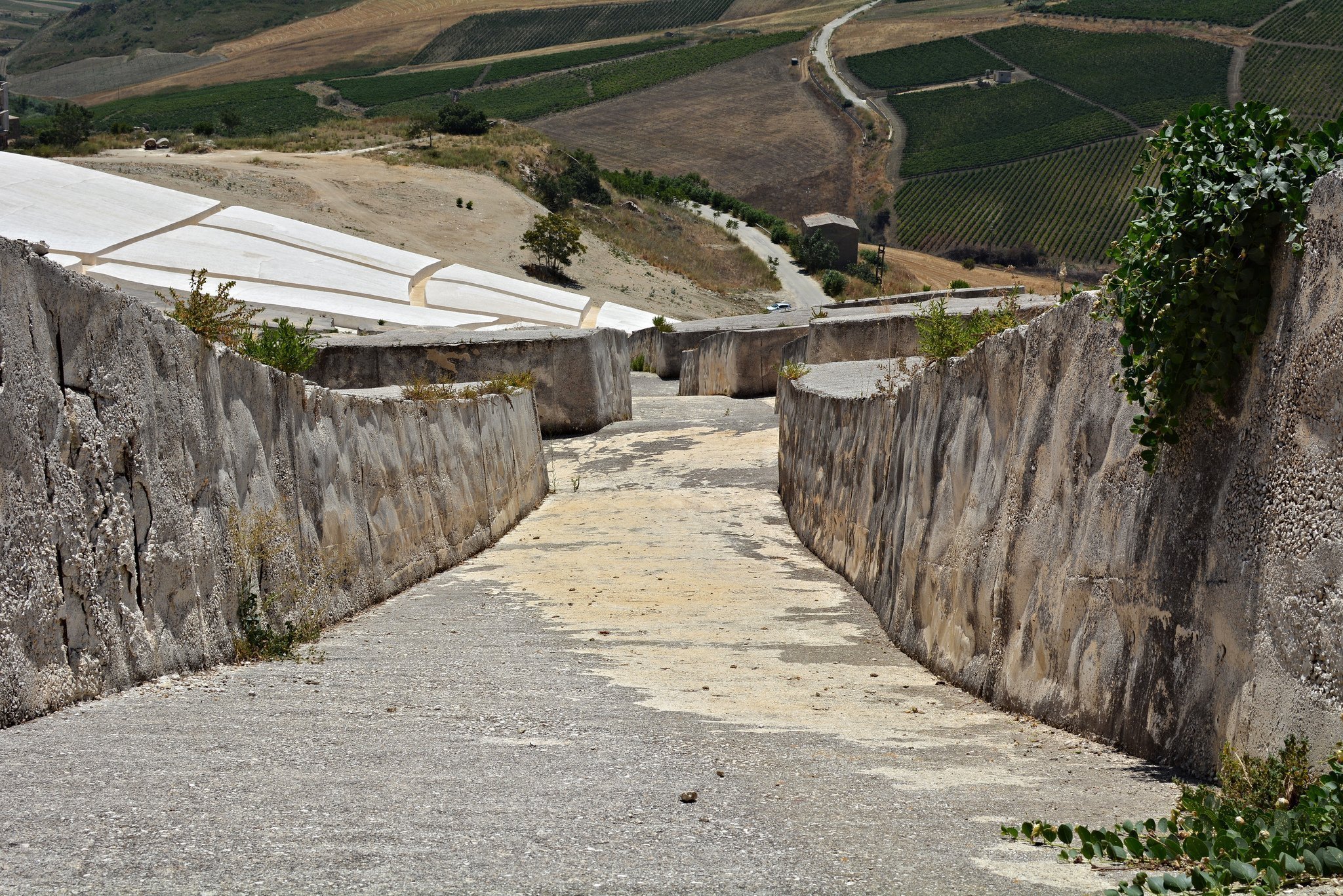 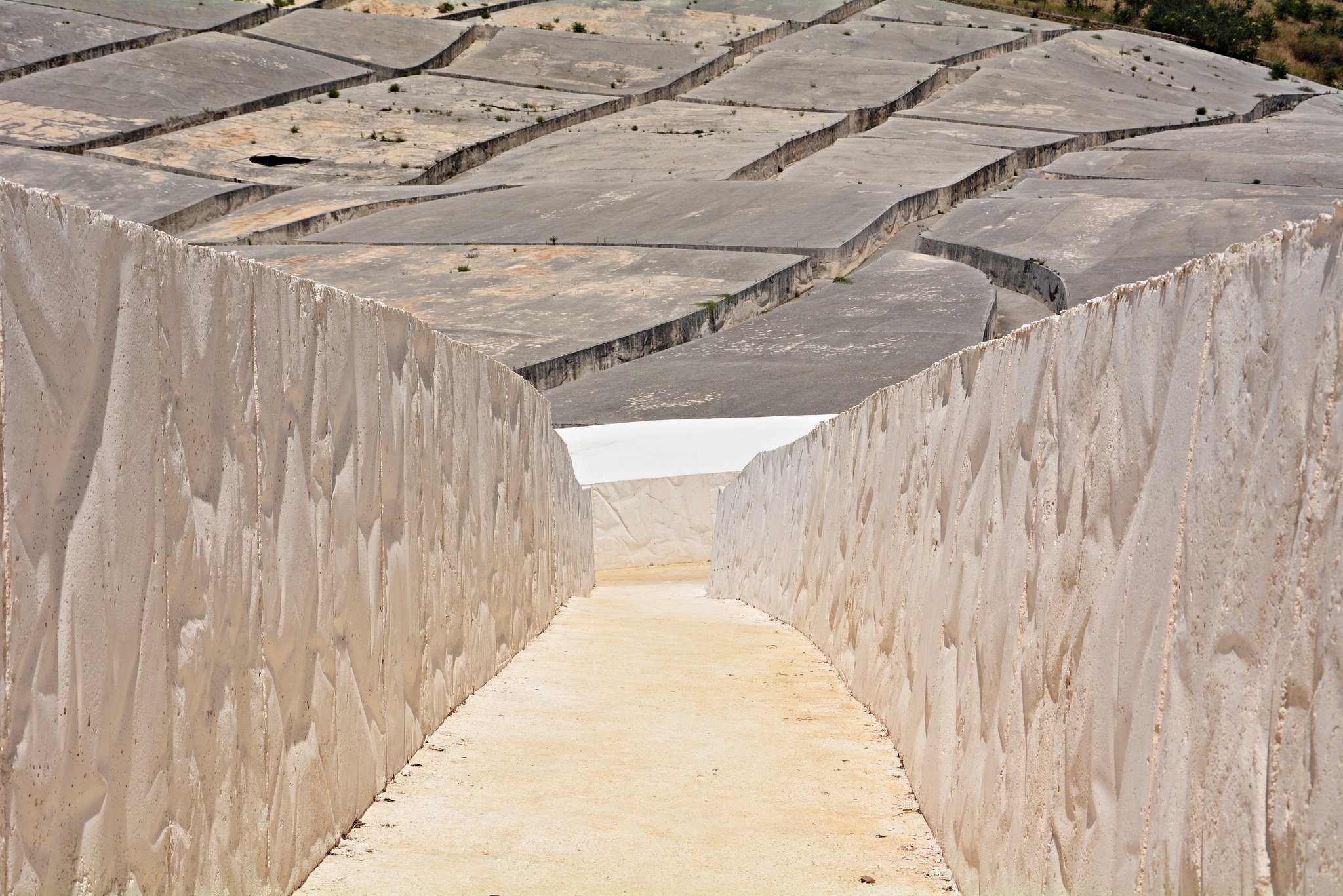 The project began in 1984 and was completed in 1989. In those 5 years, the italian army demolished all buildings and compacted the rubble. The blocks ended up being over 3 meters wide and 1,60m and spanned a size of 10 hectar. The layout of blocks and “alleyways” largely follow the urban layout of the destroyed city creating a maze of sorts, a path of loss and a reflection on the notion of loss.

Getting to Gibellina Vechia is a task in itself. Though only 74km away from Palermo, the roads are in such a state that driving faster than 50kmh seem an optimistic venture. Shortly before we reached the cretto di burri, half the road has seemingly disappeared off the cliff – luckily someone had made the effort of tracing out a dirt road path around the missing section. 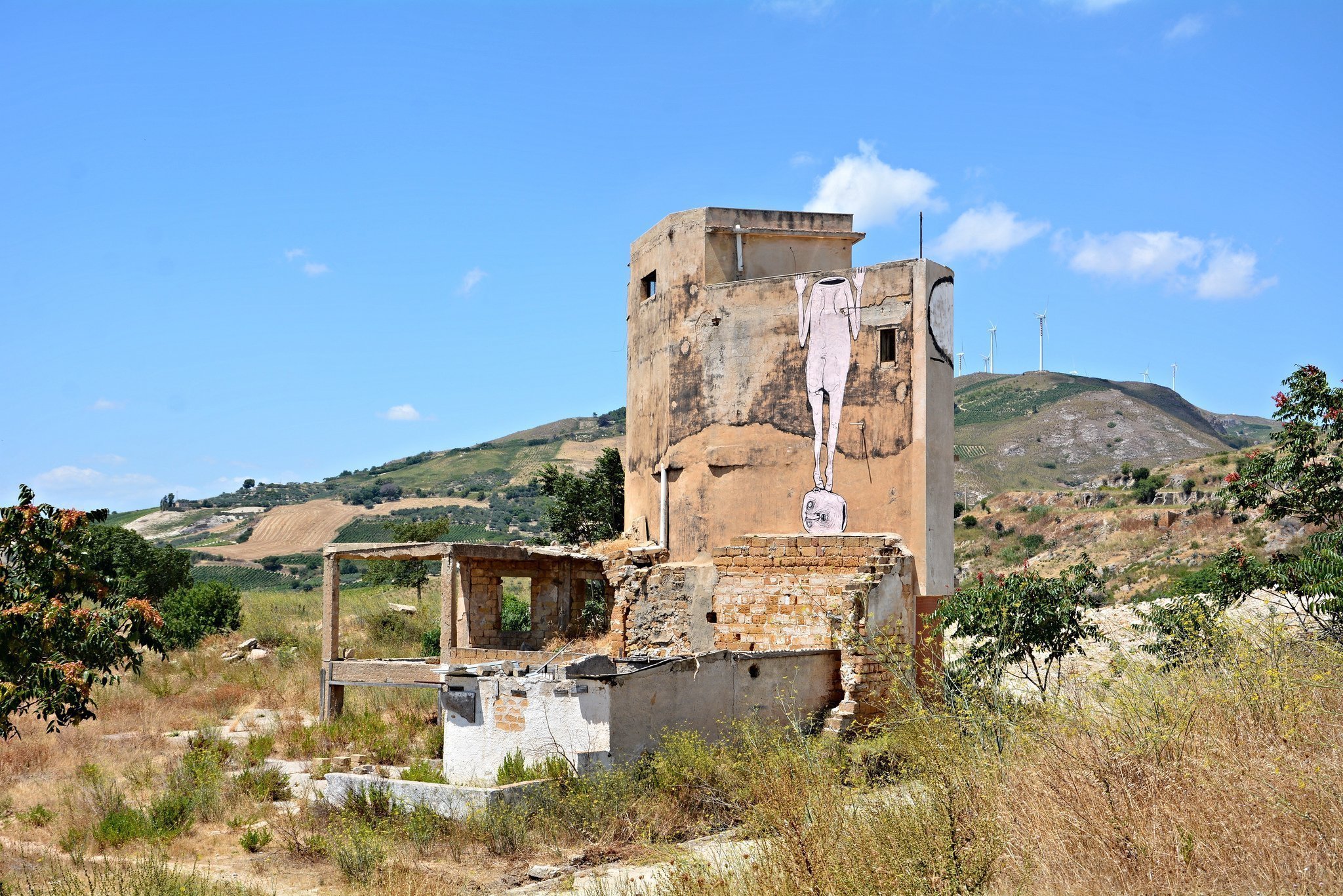 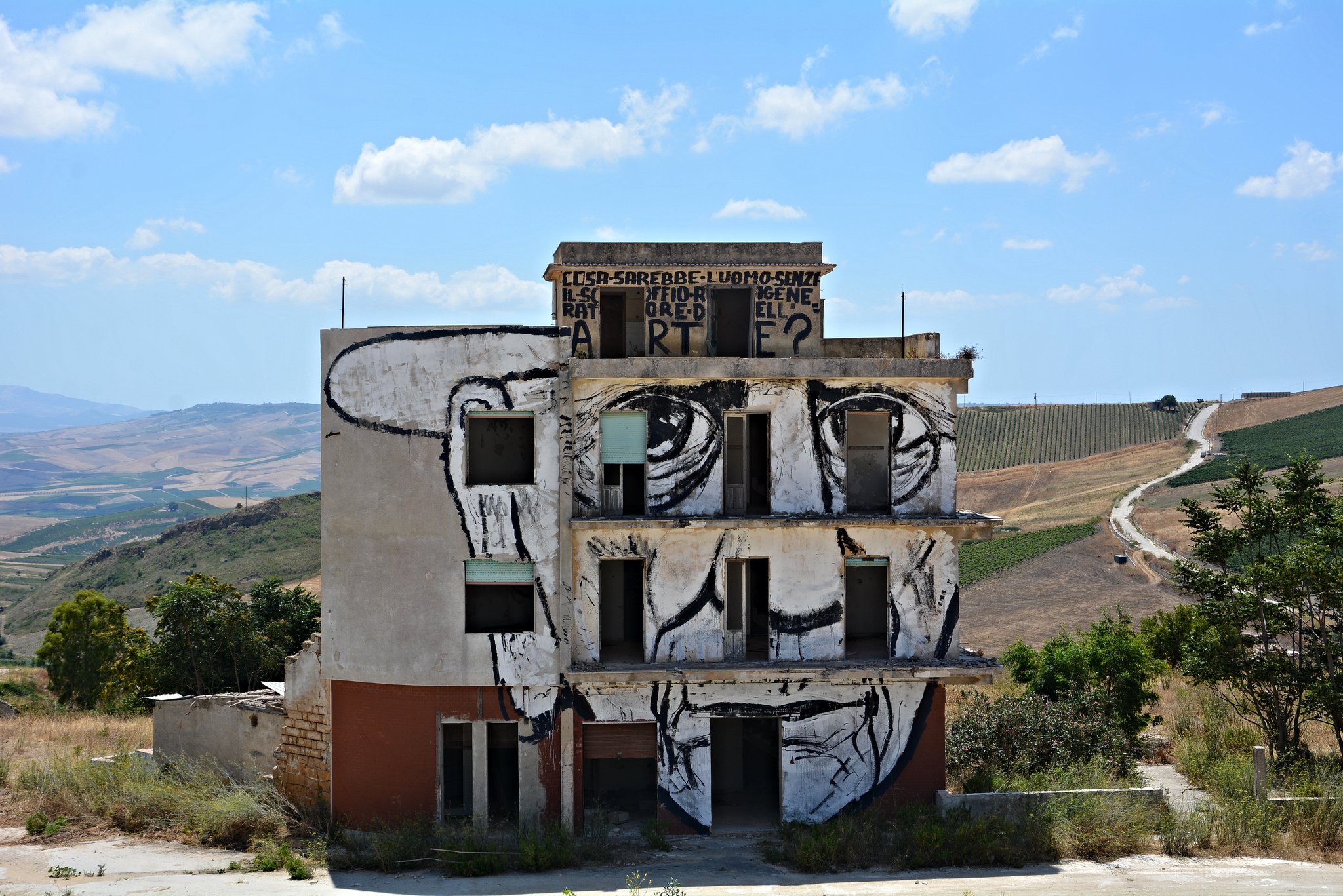 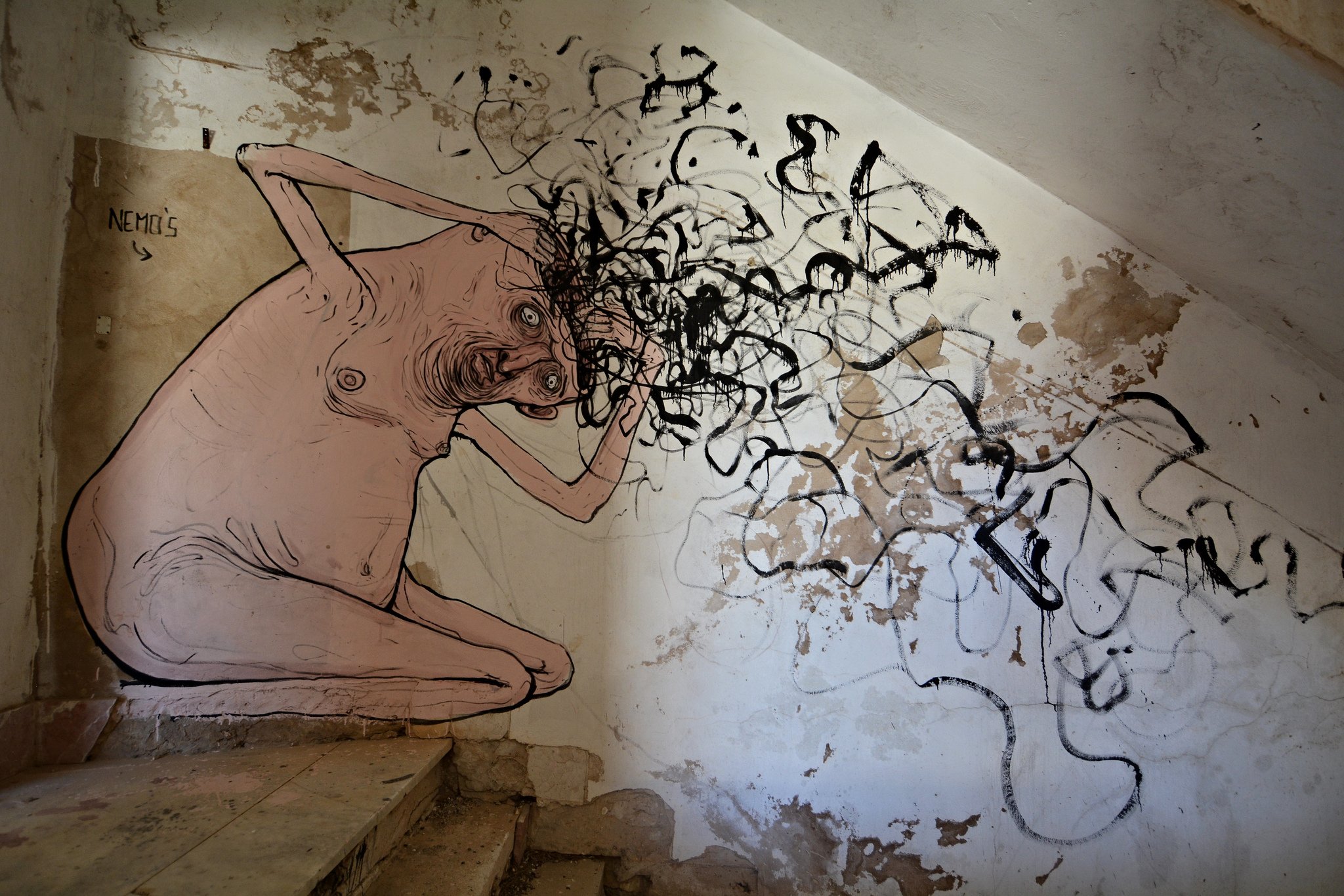 Its hot and dry and walking up a steep hill surrounded by concrete in the midday sun probably isn’t the best idea – but if you decide to venture out into the middle of nowhere you might as well go all the way. The Cretto is an unusual place. It’s literally a ghost city. The newly laid “foundations” lead you through empty streets – they give you an impression that something is actually there, but in the end they are more akin a mirage than a city.

Once you reach the top of the hill you end up with a majestic view over the rolling hills, farmland and ruins of the valley. The mind wonders when you gaze upon the fields surrounding this empty city –  someone must tend to the neatly cropped rows of wine – but it feels like it could be days until you actually meet another person here. The only other inhabitants within a 20km radius are the lizards soaking up the heat on the concrete slabs. 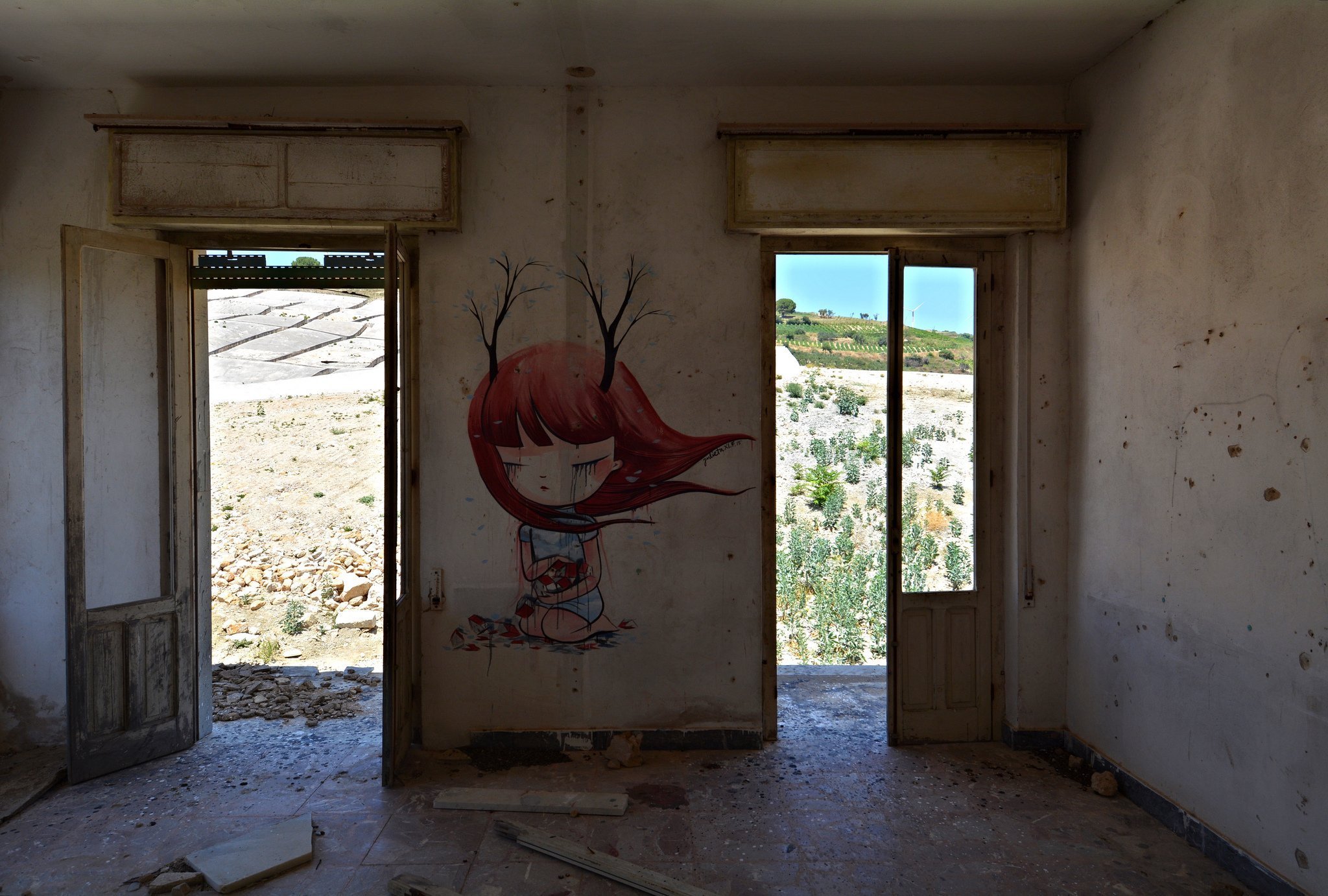 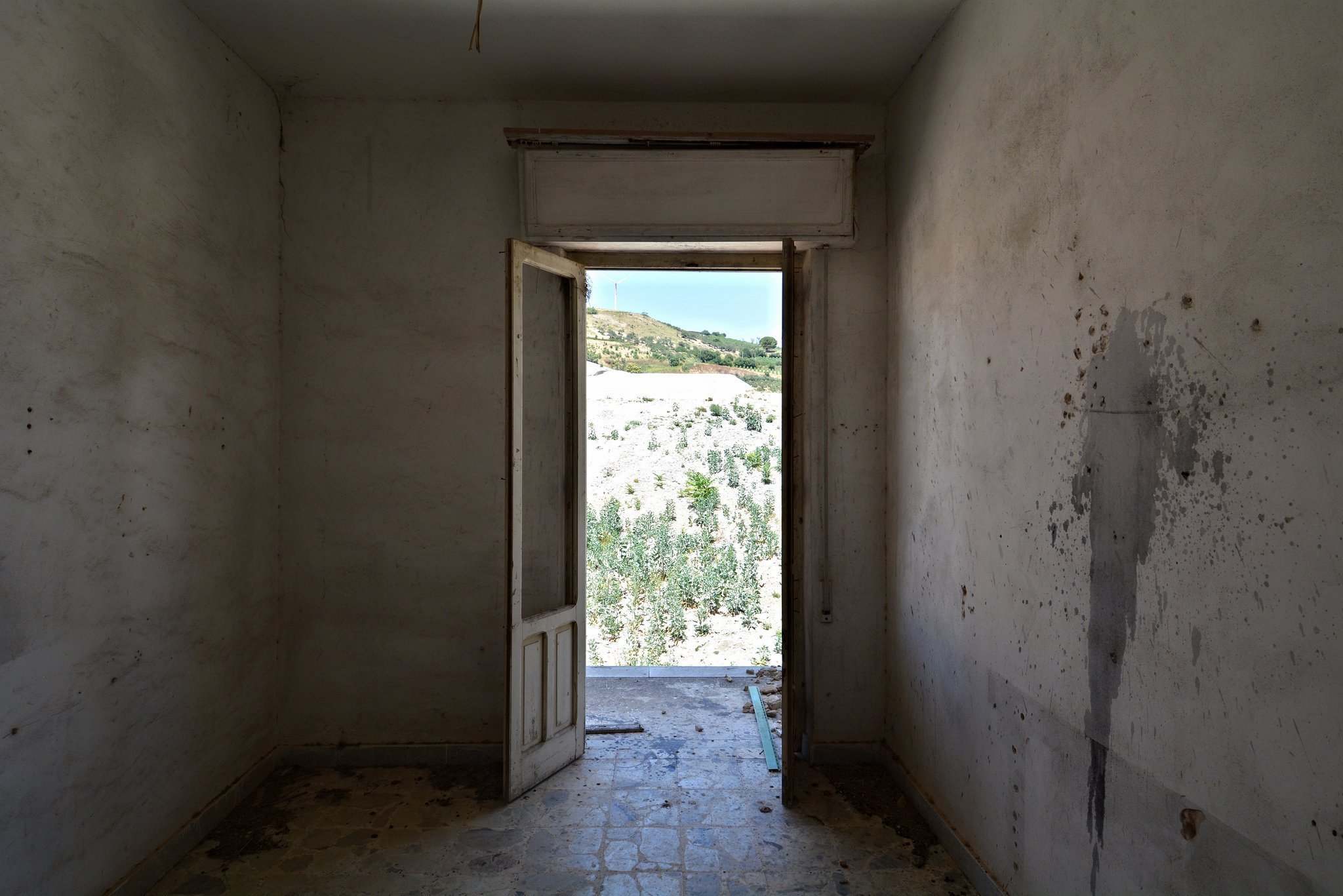 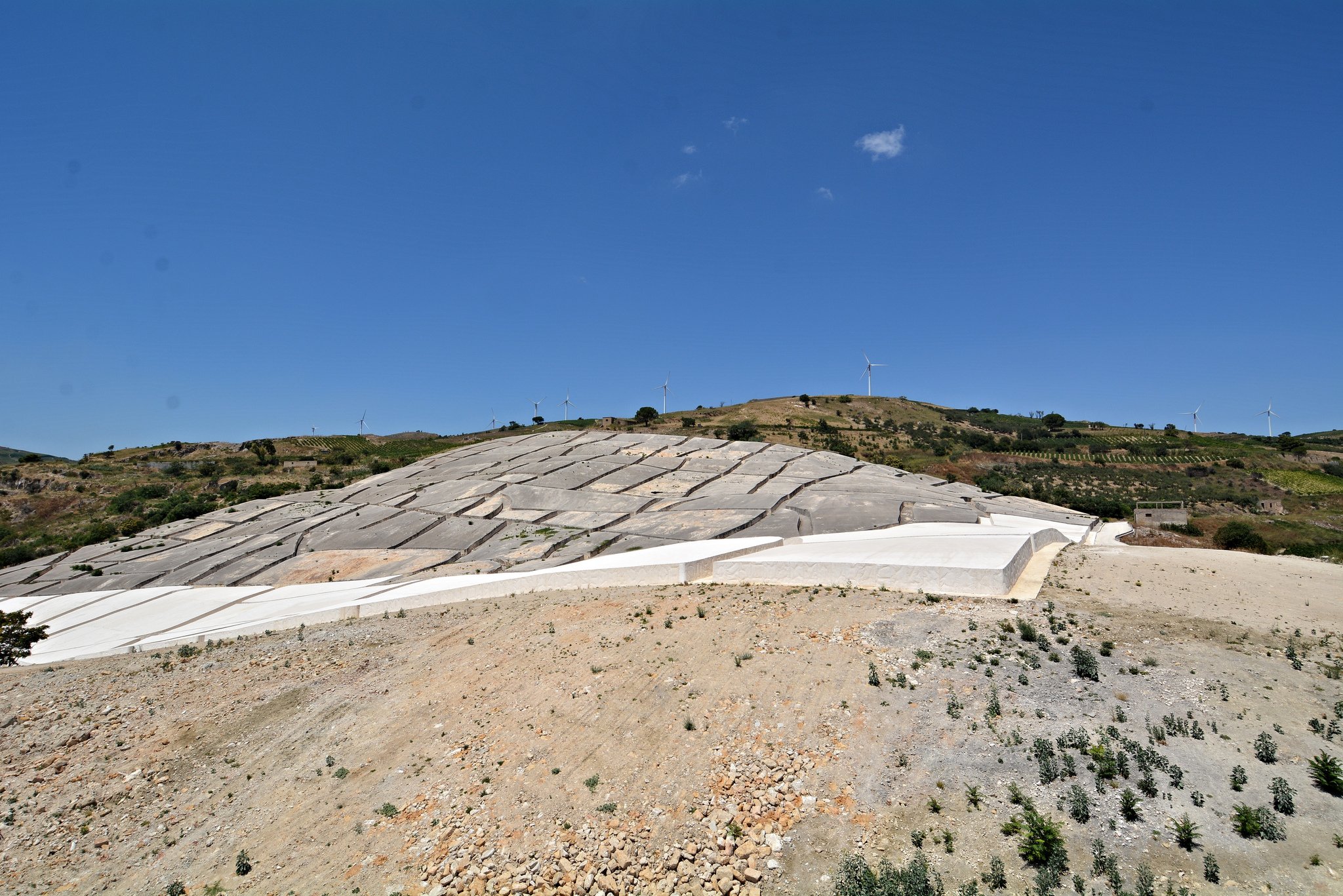 Peering over the hill is one of the few remaining buildings of the area – rumoured to have been the villa of a wealthy doctor. The buildings been gutted but the interior is still decked out with marble alluding to its former beauty. The staircase up to the roof is only for those that aren’t afflicted to vertigo – but if you do make it up to the top you’ll be rewarded with an equally beautiful vista over the area.

Gibellina Vechia is definitely worth the visit if one is close to it – if not purely for the obscurity of it all. 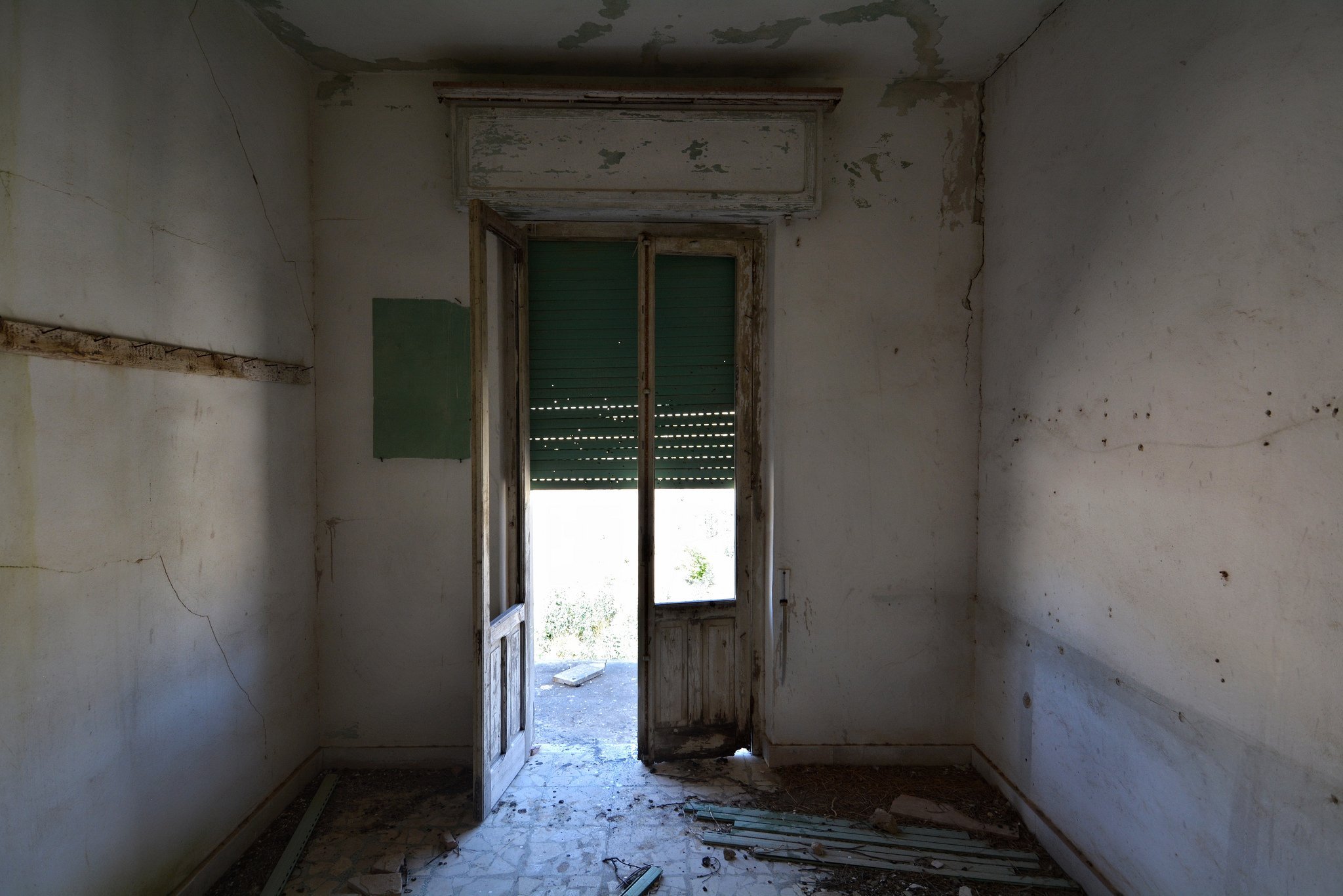 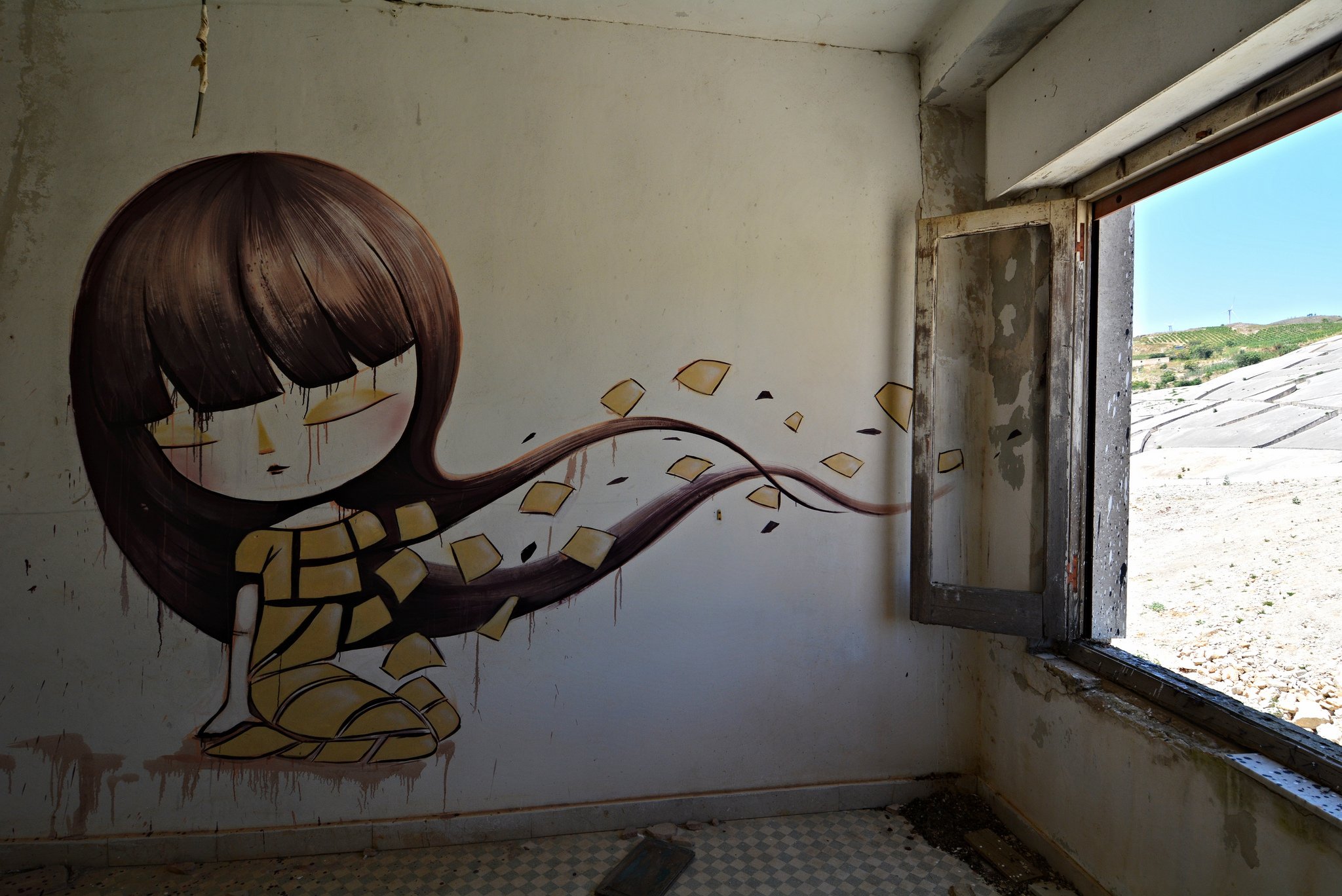 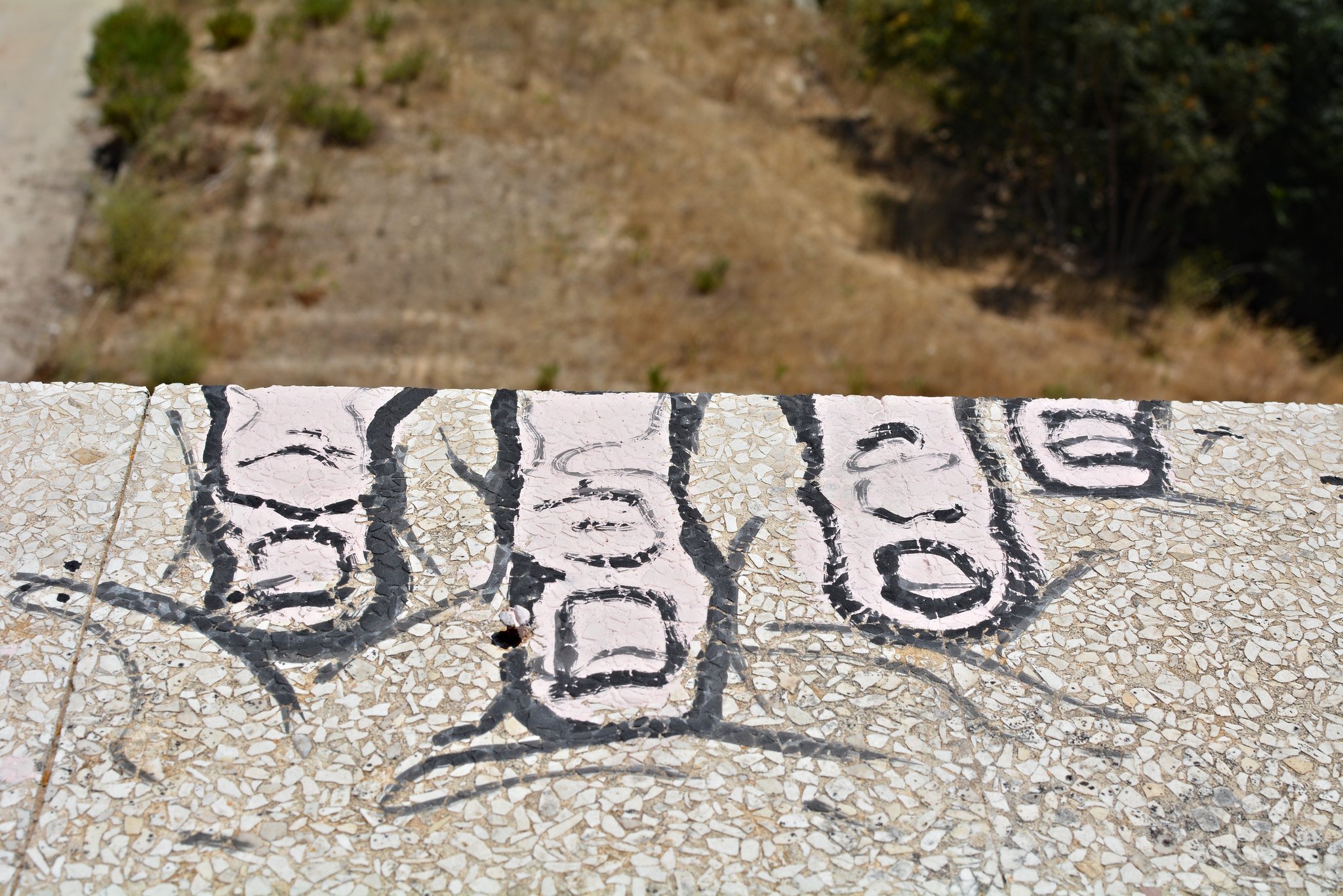 An important sidenote: If you do visit Gibellina Vechia and then intend to visit Gibellina Nouva afterwards, make sure that you type in “Gibellina Nouva” into your GPS otherwise you’ll be directed to drive down a very lonely road that leads you into a dead-end. Despite the affixed highway signs telling you that the road to Gibellina is straight ahead, it would be rather difficult to drive through the road block that’s closed off all further access. 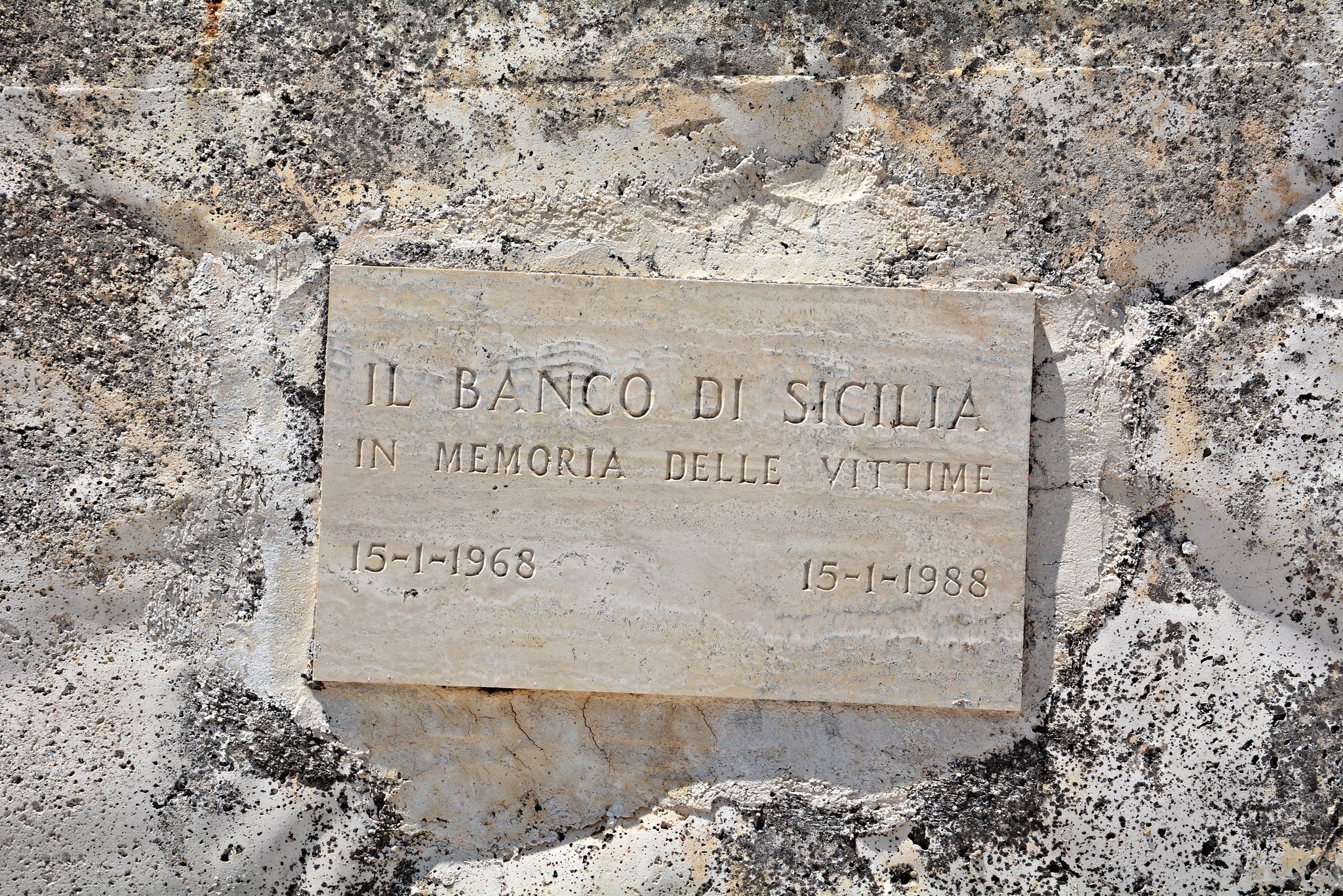 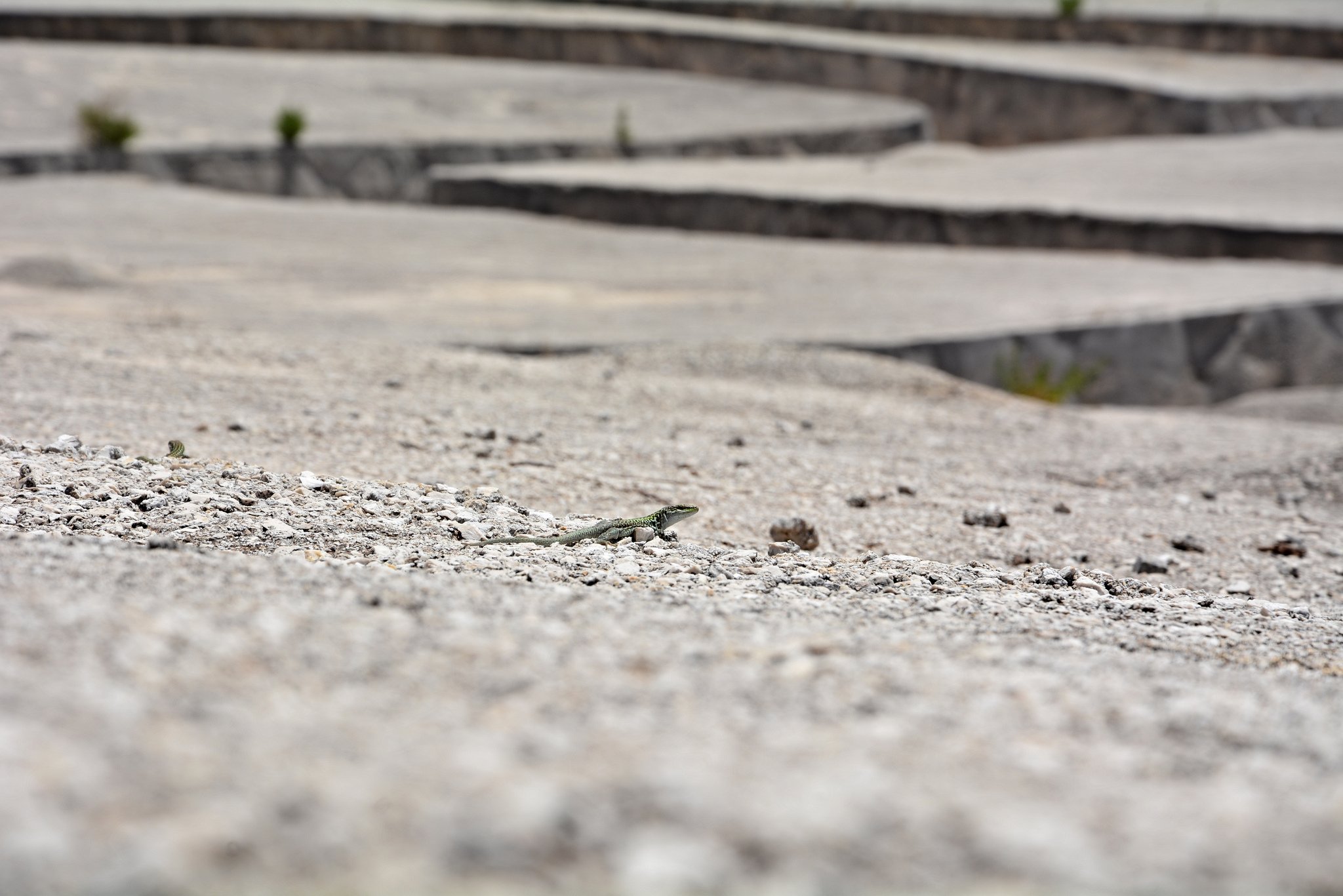 Not far from the ruins of Gibellina are the Ruderi di Poggioreale – another town destroyed by the Belice Valley earthquake. Unlike in Gibellina, Poggioreale has been left in its ruined state.  More of the Ghost Town of Poggioreale in an upcoming post.