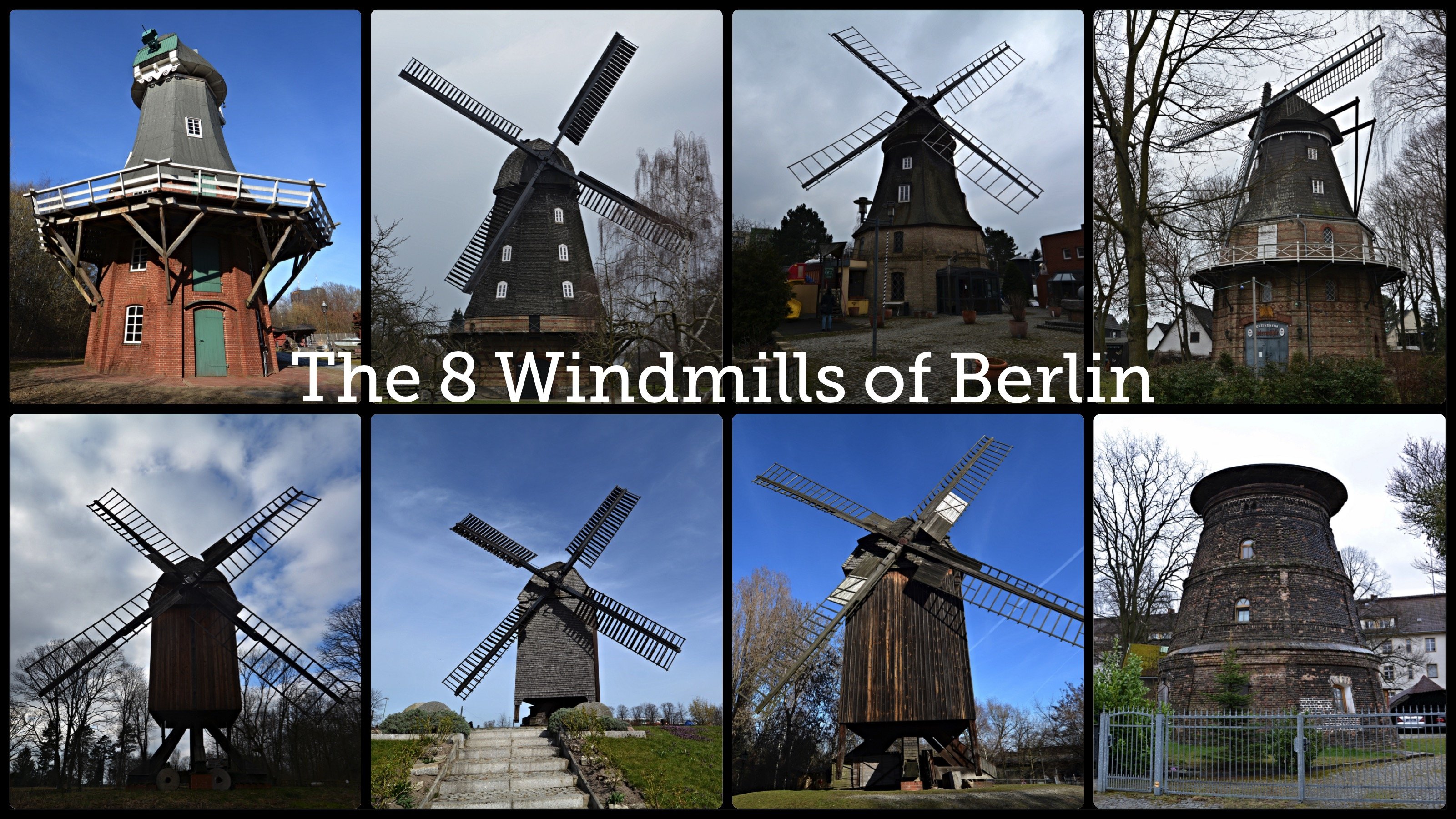 Berlin used to be swamped with Windmills. It might be hard to believe but by the year 1860, over 150 Windmills sprouted up in and around Berlin. But whats left of them today? Aside form a few street names not much – but 8 Windmills have survived Berlins turbulent history.

Berlin had 4 primary centers with a high density of Windmills. Prenzlauer Berg alone had over 30 Mills, 8 of which stood on the Windmühlenberg (Windmill Hill), which gave Prenzlauer Berg its original name (have you ever wondered why it’s called Prenzlauer BERG?). The district paid homage to its Windmill heritage by adoring its coat of arms with a stylized mill from 1992-2000 (until Prenzlauer Berg was merged into the district of Pankow).

The second major center was located in Wedding (around the Müller- and Seestraße), the third center was in Schöneberg in the former Mühlenweg (millroad), and the fourth center was in Rixdorf. With so many Mills in the city, it’s not hard to spot one of the many Windmill related street names.

The introduction of steam power in 1870 brought on the first so-called “Mill Death” as the wind powered mills could not keep up with output/production. The increased electrification of the mill drive and the formation of Industrial Mills brought on the second wave of the “Mill Death” wiping out most smaller mills. By 1945, only a handful of the 150 or so mills had survived and struggled to compete with the industrial ones. The last operating Windmill in Berlin (though with a motor and not with wind power) was the Jungfernmühle in Buckow, which ceased operating in 1980. Since then, the last remaining Windmills have been converted into Homes, Museums, and Restaurants.

Having passed by the Blockwindmühle in Marzhan multiple times – I got curious and set out to find the remaining Windmills in Berlin. Of Berlins 8 Windmills, 4 of them are still in their original location, while the other 4 have been moved or rebuilt in Berlin. 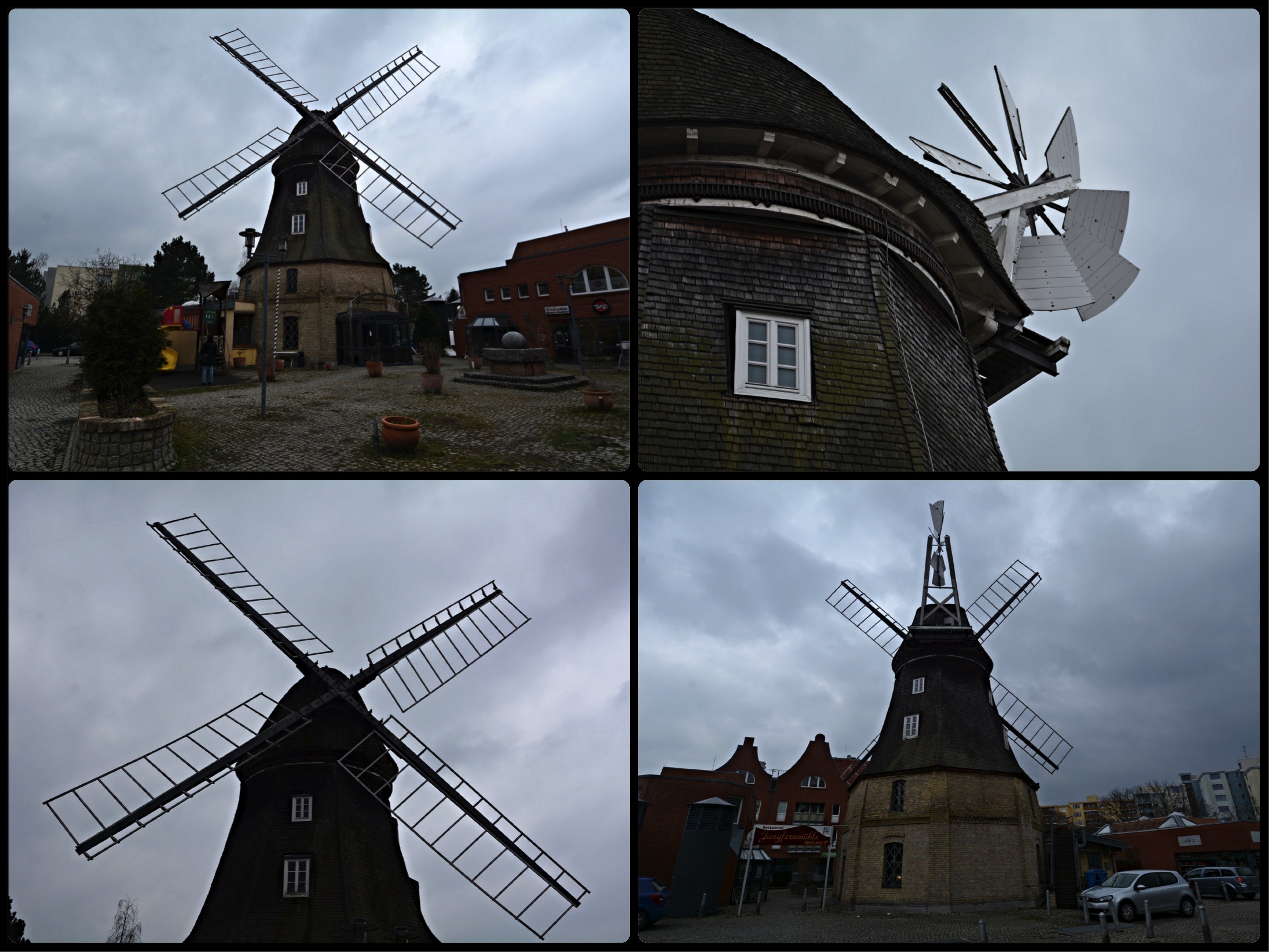 The Jungfernmühle (also known as the Wienecke’sche Mühle)in Buckow-Gropisustadt has the honor of being both the oldest surviving Windmill in Berlin, as well as having being the last fully operational Mill (not for Museum Purposes) – having ceased production in 1980. The name of the Jungfernmühle – literally “Virgin/Maiden Mill” has a rather tragic origin. When the Mill was first constructed in Potsdam in 1757, the millers daughter paid the Mill a visit. After a strong gust of wind. the daughter got caught up in one of the wings and was smashed into the gallery above. The Jungfernmühle was constructed by the Dutch carpenter Adrian den Ouden, the last Dutch inhabitants of the famous Potsdamer Dutch Quarter. In 1860 the mill was forced to make way for a Villa. The Mill was bought up by Johann Wilhelm Blankenberg who rebuilt it in Rixdorf. In 1872 it was sold again to Otto Wienecke (hence the name Wienecke’sche Mühle) who rebuilt it in its current location in Buckow-Gropisustadt. Since its ceased operation, its home to a restaurant.

Current Use: Fully Operational Windmill – Used as a Museum 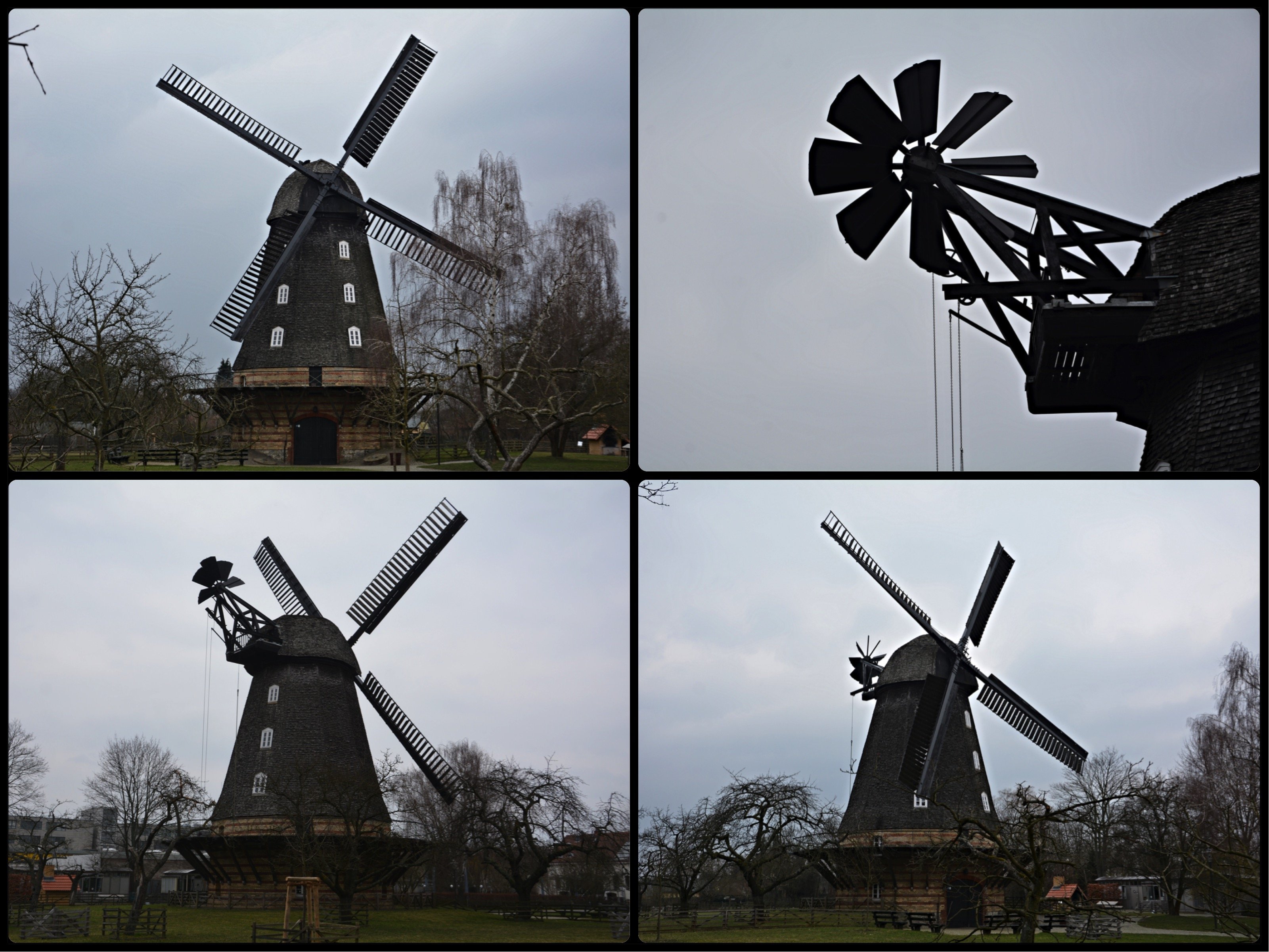 The only information I have about this smock mill is that it was built in 1866 in Britz. In 1874, it was bought by the Miller Karl Albert August Stechan, who gave it its name “Stechansche Mühle”.  In 1985 it became part of the Bundesgartenschau – but today it is administered by the Grün Berlin Park und Garten GmbH which organizes tours. It still produces bread that you can buy. If so inclined you can also get married in this Windmill. 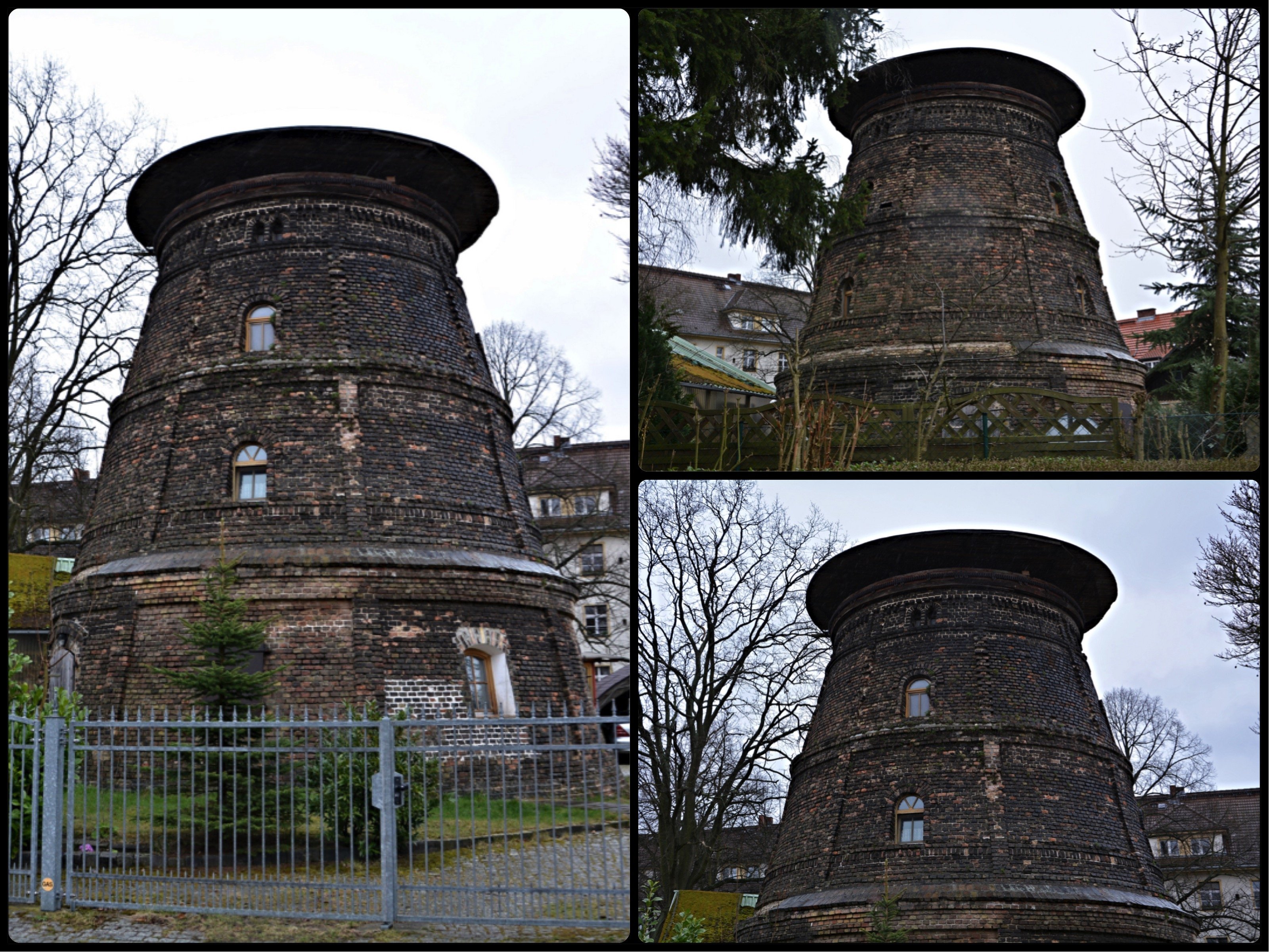 Built in 1881 (quite possibly in 1879 or 1880) – the Zehlendorfer Mühle was the third Windmill in Zehlendorf. Less than 8 years after its construction, due to the lack of wind, the owner decide to fit the mill with a petroleum motor, which was replaced in 1921 with an electric motor. The blades were removed in 1943 to prevent allied bombers from using it as an orientation point. In the 1950s the Mill fell into disrepair and neglect. A private investor was found in 1997 who bought what was left of the Mill and restored it – while converting it into a private home. 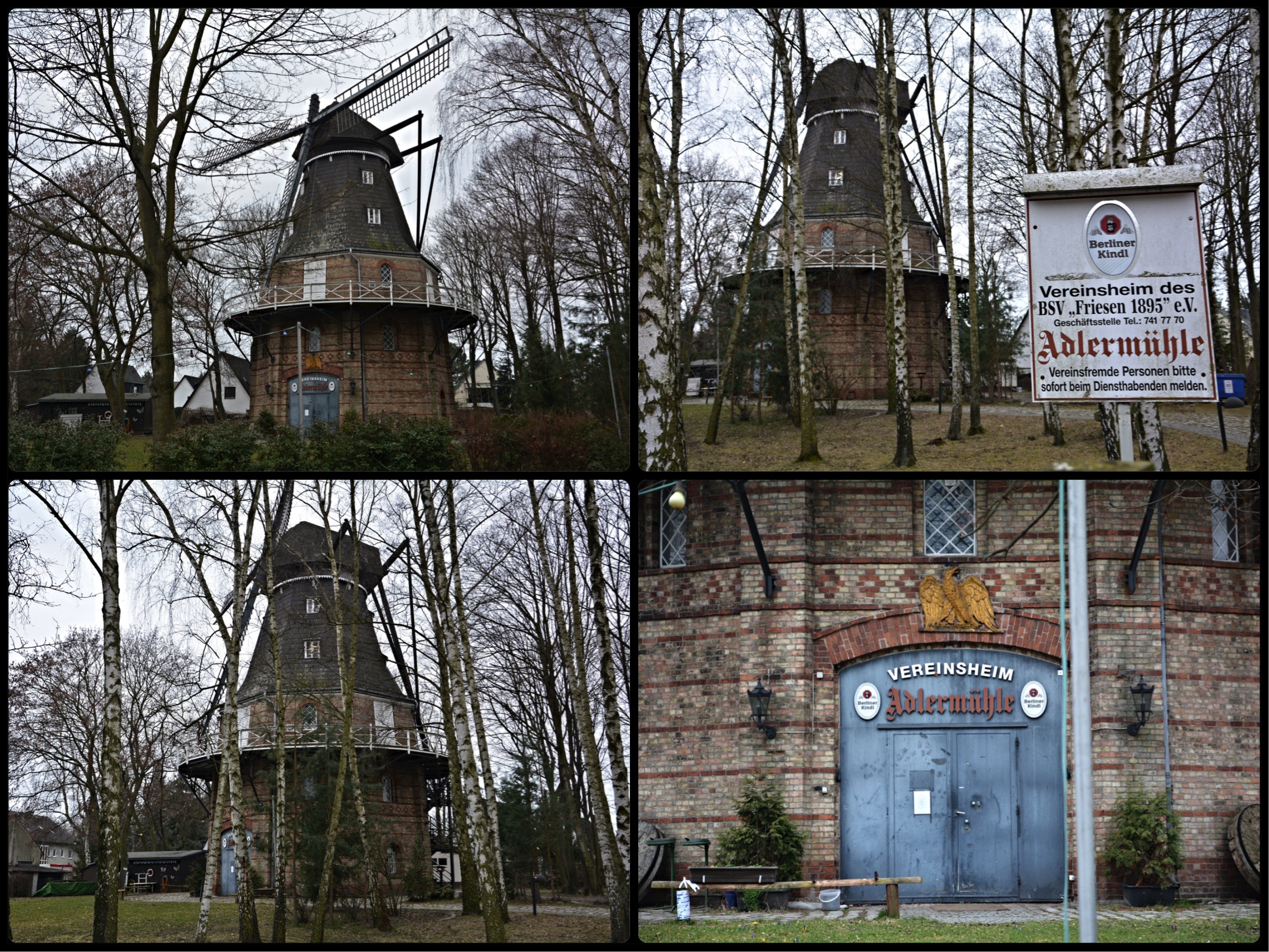 Built in 1889, the Adlermühle was rumored to be the largest Windmill in Brandenburg. The Mill officially ceased operating in 1959 and was declared a listed building in 1963. The swim club  “Friesen 1895” e. V. set up their club house in the neglected mill and contributed their own funds for its restoration. 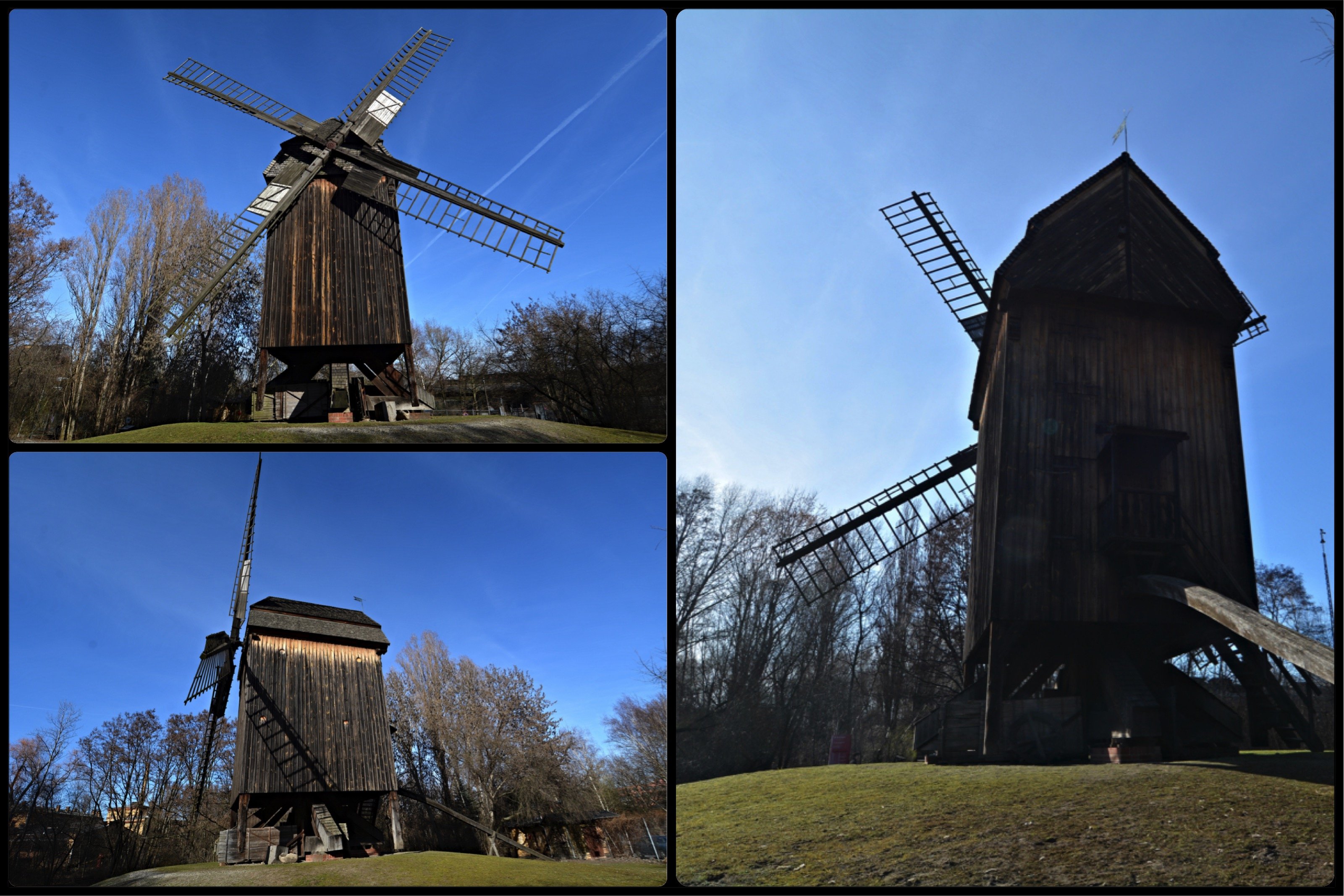 The Wuhlkropfmühle or Staberow’sche Mühle (named after its owner) was originally built in 1820 and stood in the Grünauer Straße in Köpenick. It was sold in 1872 and moved to the Glienicker Straße 508 in Bohnsdorf. The mill was declared a listed building in 1958. In 1983, the Deutsches Technikmuseum acquired the mill, deconstructed it and rebuilt it in their Museumspark in Kreuzberg. Pro Tip: If you walk around the Park am Gleisdreieck, you can see the Mills without paying for a Museum Ticket. 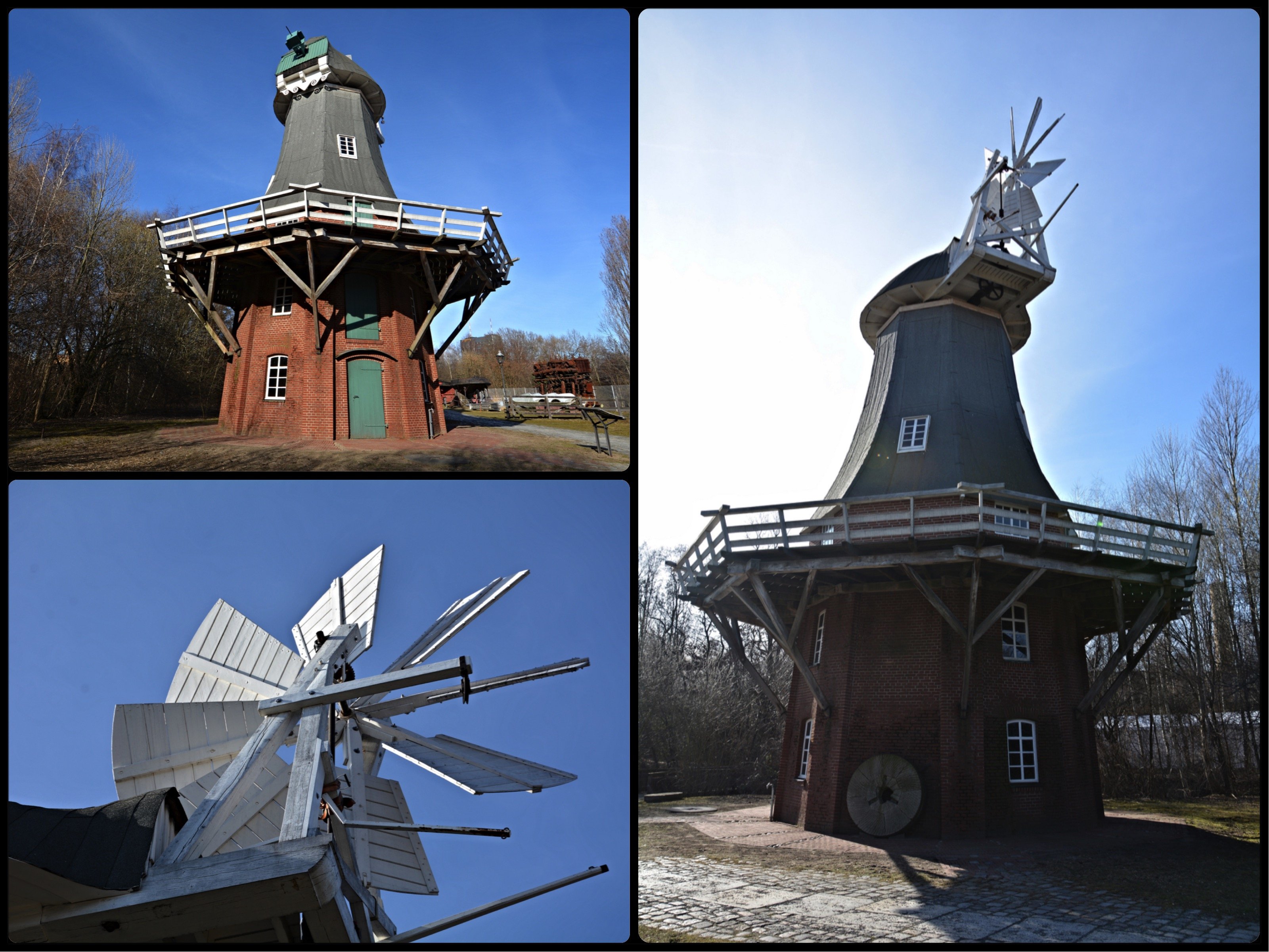 The Holländermühle Foline was built in 1911 in Ostfriesland (a coastal region in the northwest of Germany). The mill was shut down in 1960 and left unused. As with the Bohnsdorfer Bockwindmühle, the Holländermühle Foline was acquired by the Deutsches Technikmuseum in 1985 and set up in the Museumspark. Pro Tip: If you walk around the Park am Gleisdreieck, you can see the Mills without paying for a Museum Ticket. 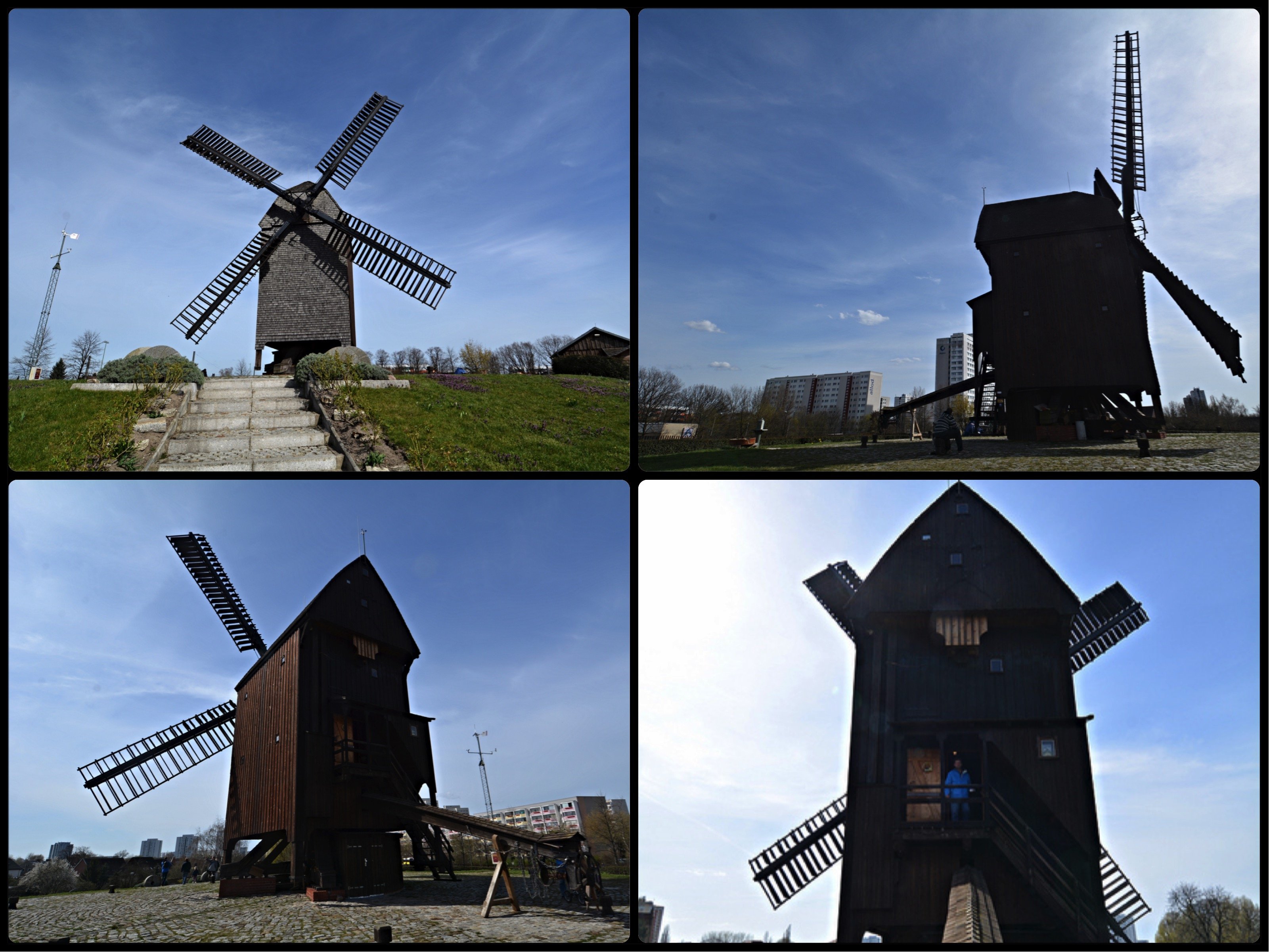 Marzahn was once home to 3 Windmills. The first was built in 1815, the second in 1873 and the third in 1908. The last Mill in Marzhan – which was practically just a ruin – was bought by the city in 1978 and torn down. In 1982 the city municipality (of East Berlin) decided that in order to spruce up the village center of Marzahn, a new windmill was to be erected. The turbulent events of the late 1980s killed off these plans. In 1994, the Dutch Millwright Harrie Beijk built a new fully functioning Post Windmill in Marzahn, which to this day serves as an active windmill, producing up to 1 Ton of flour per day.  The Mill is open to visitors from Mo-Fr. 10-12  / 13-16 and on Sundays 15-17  (April thru October) 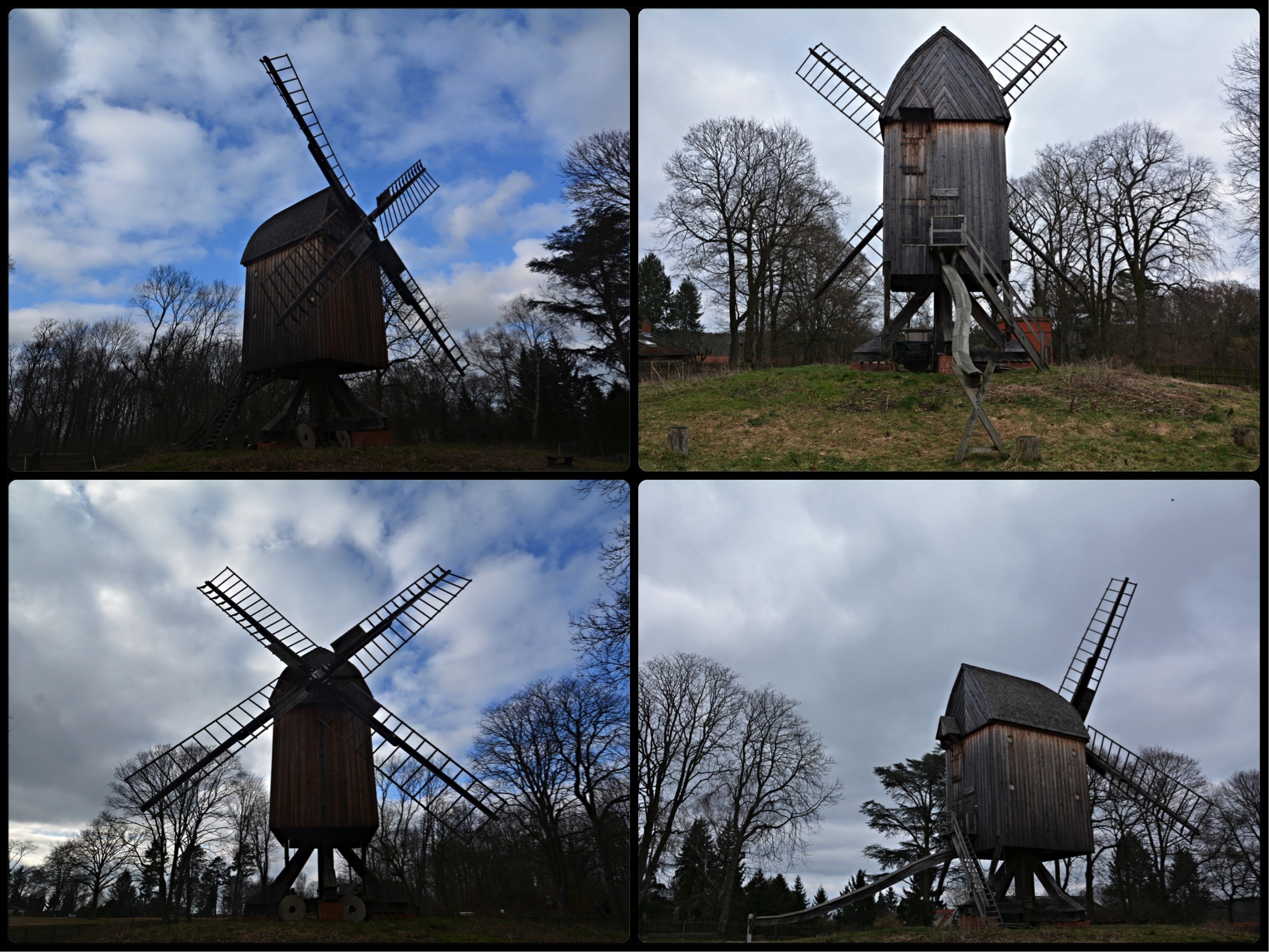 Gatow has the honor of having Berlins “newest” Windmill. One of the earliest Windmills in Gatow was erected in 1845 (some say as early as 1824) on the Windmühlenberg in Gatow – which interestingly found a very unusual demise. One of Berlins most Famous directors Richard Eichberg was filming the last scenes of the movie “Die Mordsmühle auf Evenshill” (sadly the film has been lost) – which called for the destruction of a windmill. The farmer who owned the old Gatow windmill sold it to Eichberg in 1921 who had it burnt down in the final scenes of his film.

In the early 2000s, an Association in Gatow bought a “new” windmill for €4000 from another village. The 225 year old mill was apparently very similar to the old one in Gatow, so it was rebuilt on the Windmühlenberg in 2008. It can be easily visited all year around.