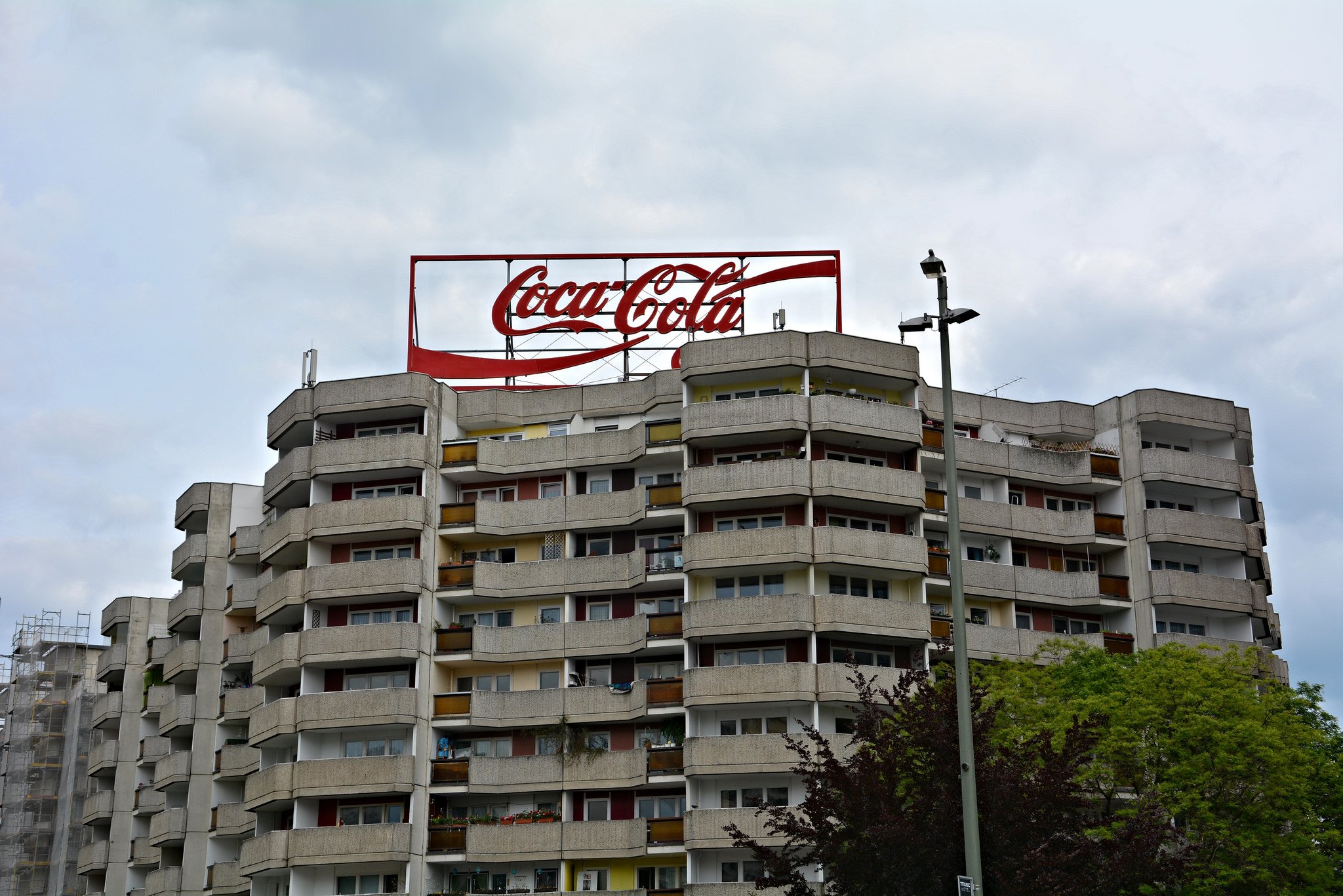 Spittelmarkt. East Berlin still feels like East Berlin here. The massive 6 Lane Leipziger Straße cuts through the city  while the “Komplex Leipziger Straße” – an Octuplet Set of Plattenbauten built in the late 1960s looms over Berlin. It’s not a pretty sight but one could almost mistake the ensemble of prefabricated concrete flats for a skyline.

But it wasnt always like this. Around 1400, the St.-Gertrauden-Stift built a Church and Hospital on an empty plot of land outside of the old city walls to cater for the Travelers, Merchants as well as the poor and sick citizens of Cölln and Alt-Berlin. The land around the Getraudenhospital soon turned into a major junction and market space. From 1750 onwards (the Hospital had since burned down) the plot of land was officially known as Spittelmarkt. This came into being through the evolution of the name Getraudenhospital (Gertrud Hospital): 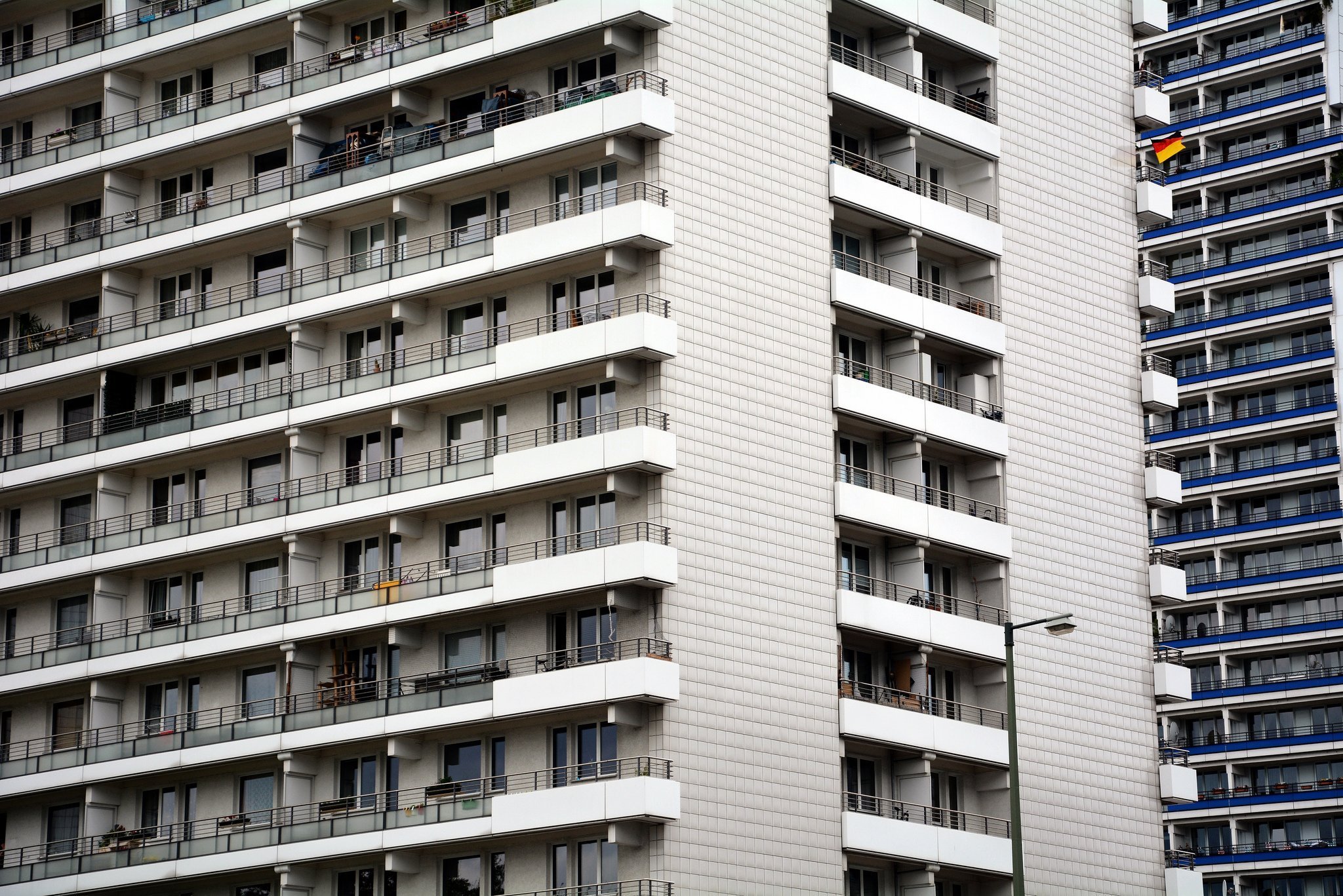 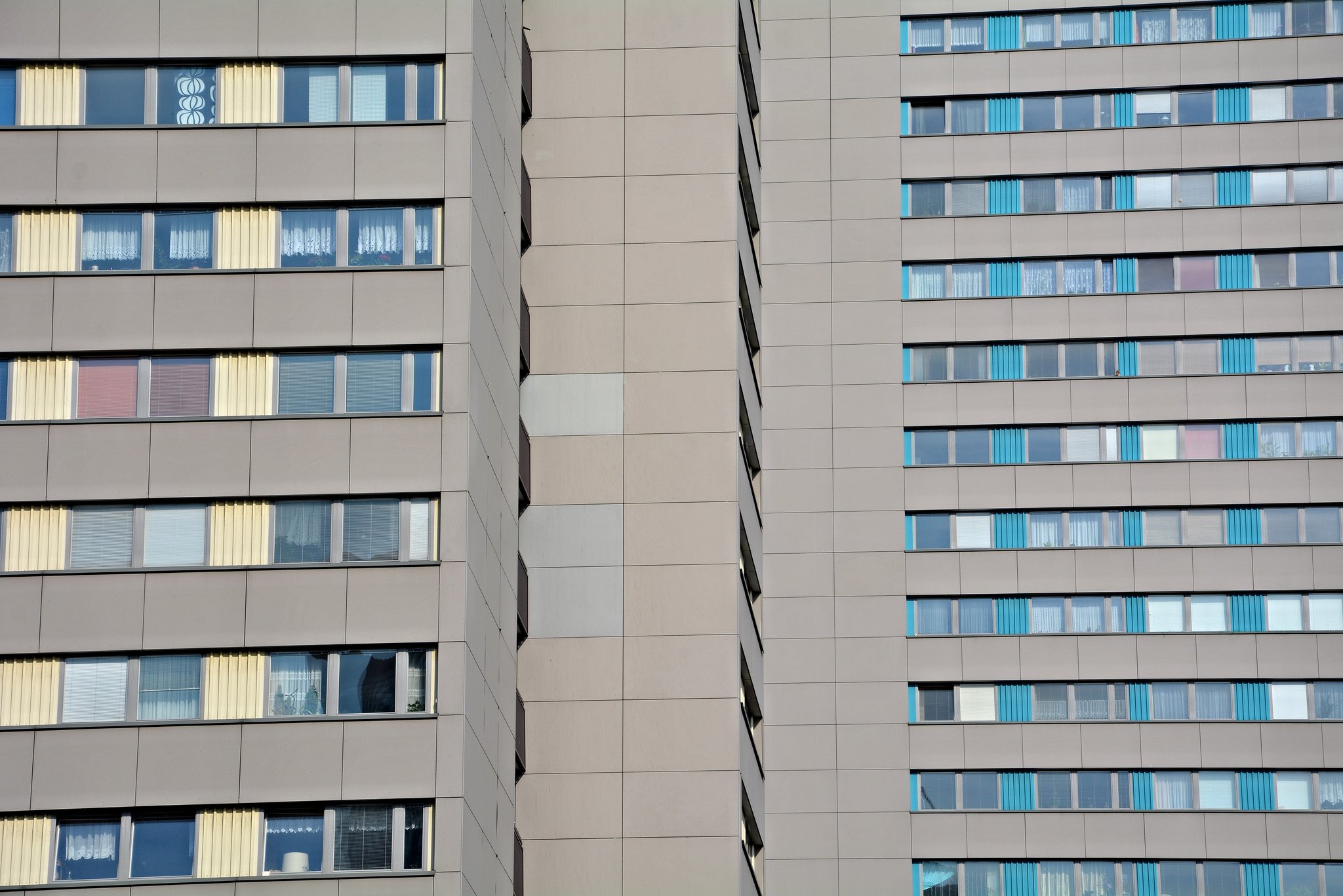 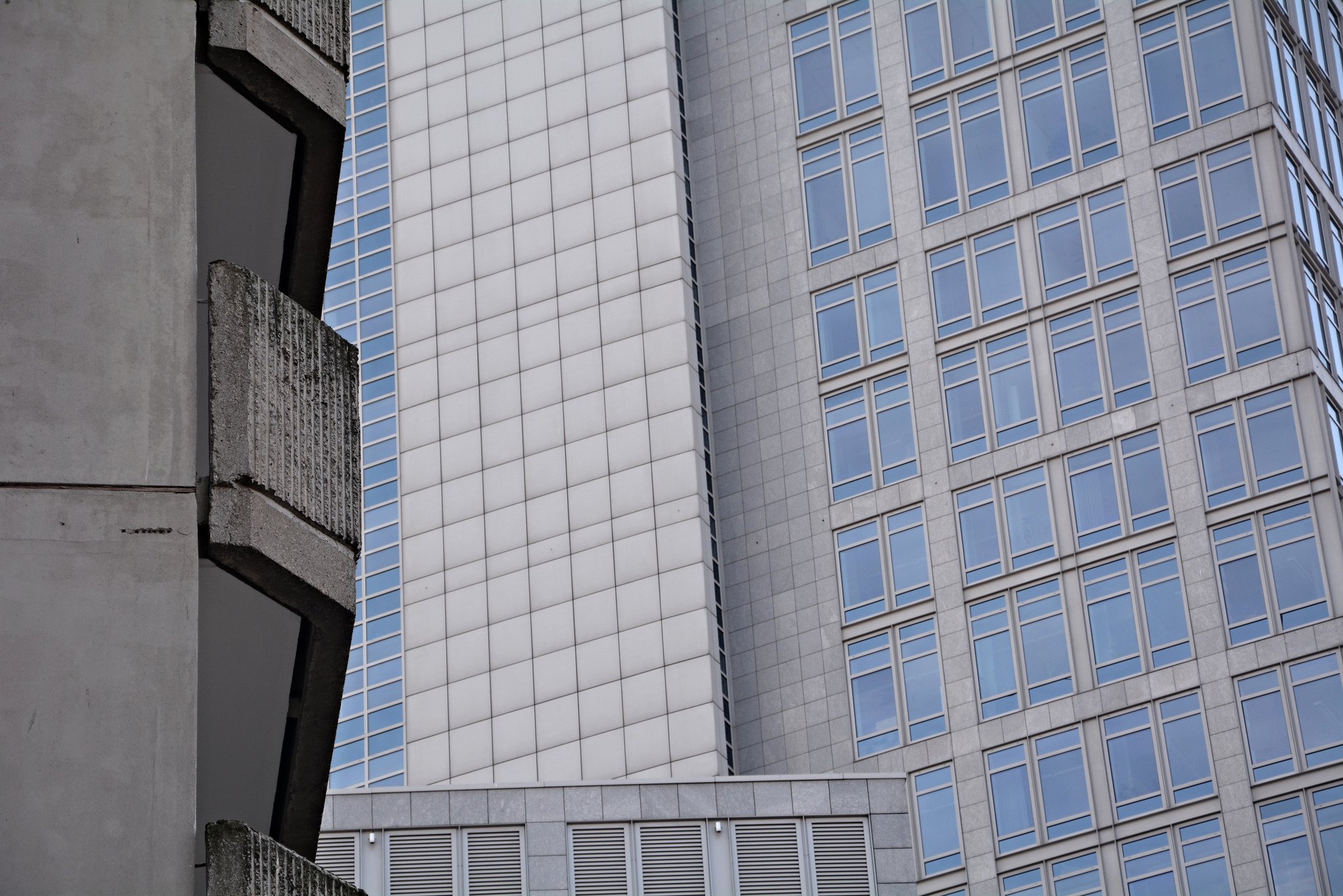 The city began to rapidly expand in the 18th Century, and the Spittelmarkt evolved into a densely populated merchants quarter. The area was then totally destroyed at the end of the second world war.

Immediately after the war, the area was cleared of rubble and ruins and completely rebuilt in the 1960s and 70s.

And this is where the “Spitteleck” comes into play.

The Spitteleck was “Designed” by the architeckt Eckart Schmidt and built by the BMK Ingenieurhochbau Berlin between 1980 and 1985. The brutalist monstrosity housed 295 apartments, a kindergarten, 2 stores and a restaurant. The concrete facade was decorated with various depictions of children, animals and flowers in an attempt to add some decorative element to its surroundings. 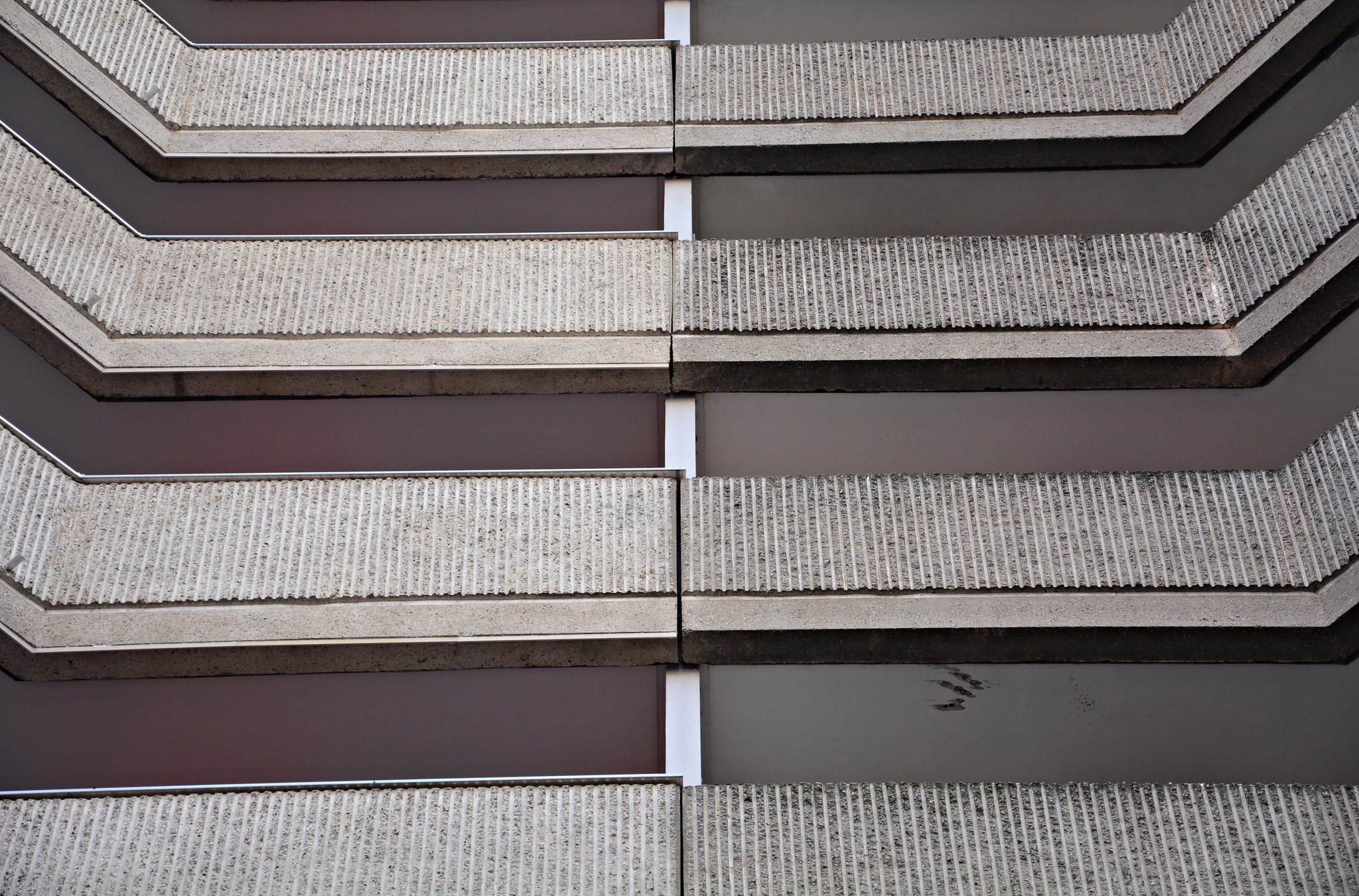 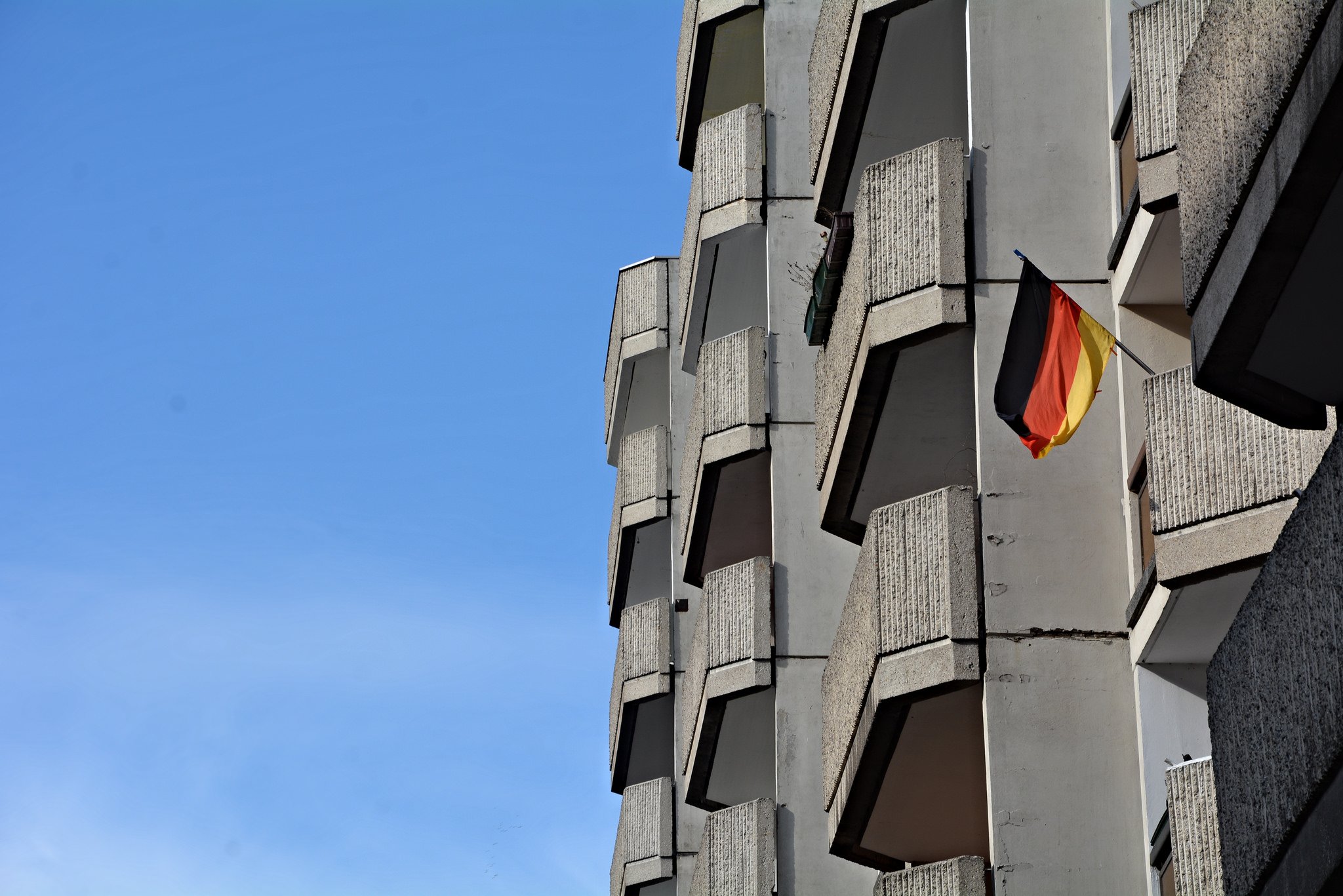 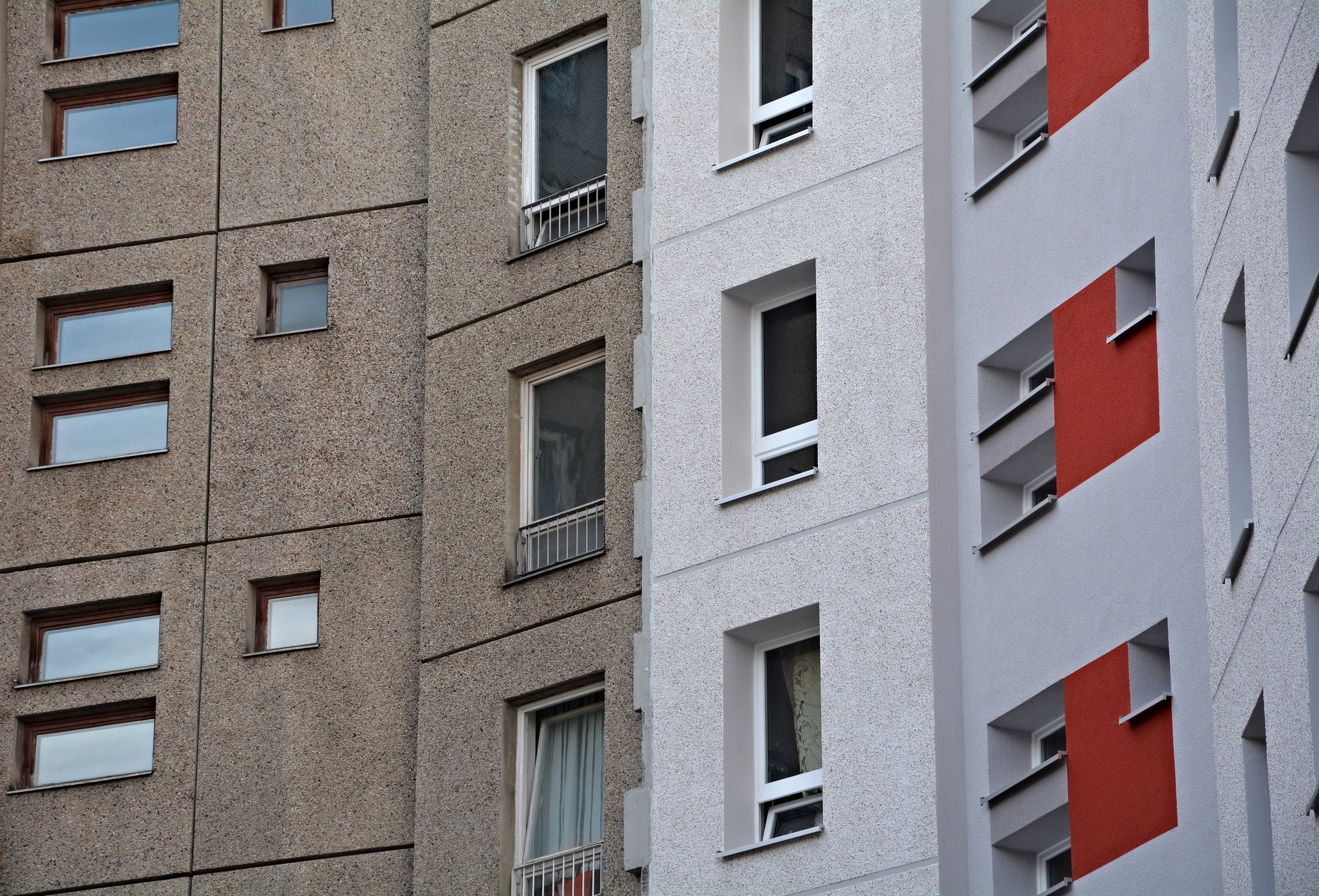 Even though it stuck out like a sore thumb, the Spitteleck was awarded the “Architecture Prize of Berlin” in 1986. Speaking of Design Awards, have you heard of Superfest – the almost unbreakable East German Glass? The Spitteleck – despite its brutalist architecture – signaled a new era for East German City Planning. The Spitteleck tried to fit in with its surroundings by following the “natural” flow and height of the (previous and) surrounding buildings. It was an attempt to fit in with its surroundings, if one ignores the ugly cubic exterior

So whats so special about this Building? The Illuminated Coca Cola Advertisement on top of it! 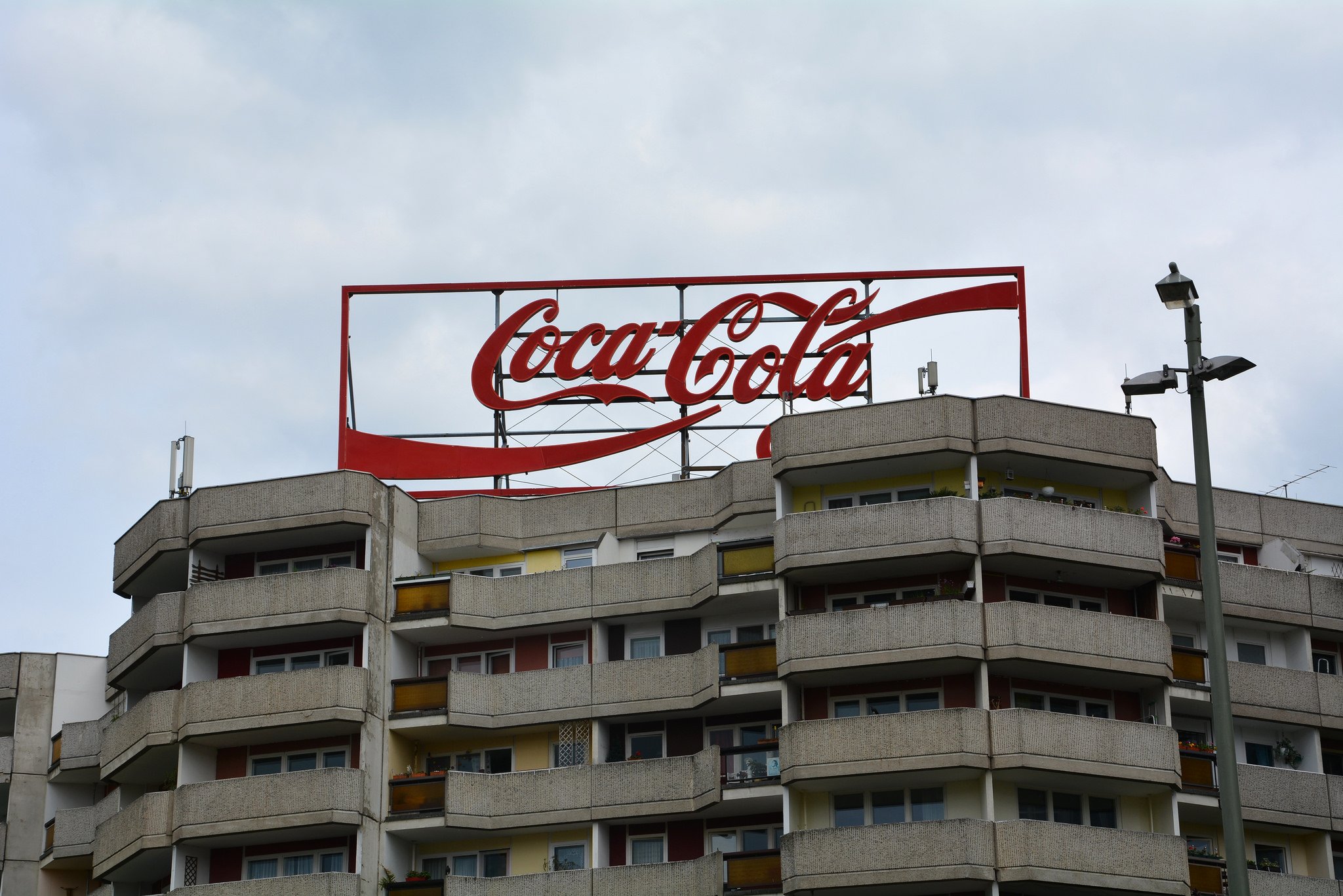 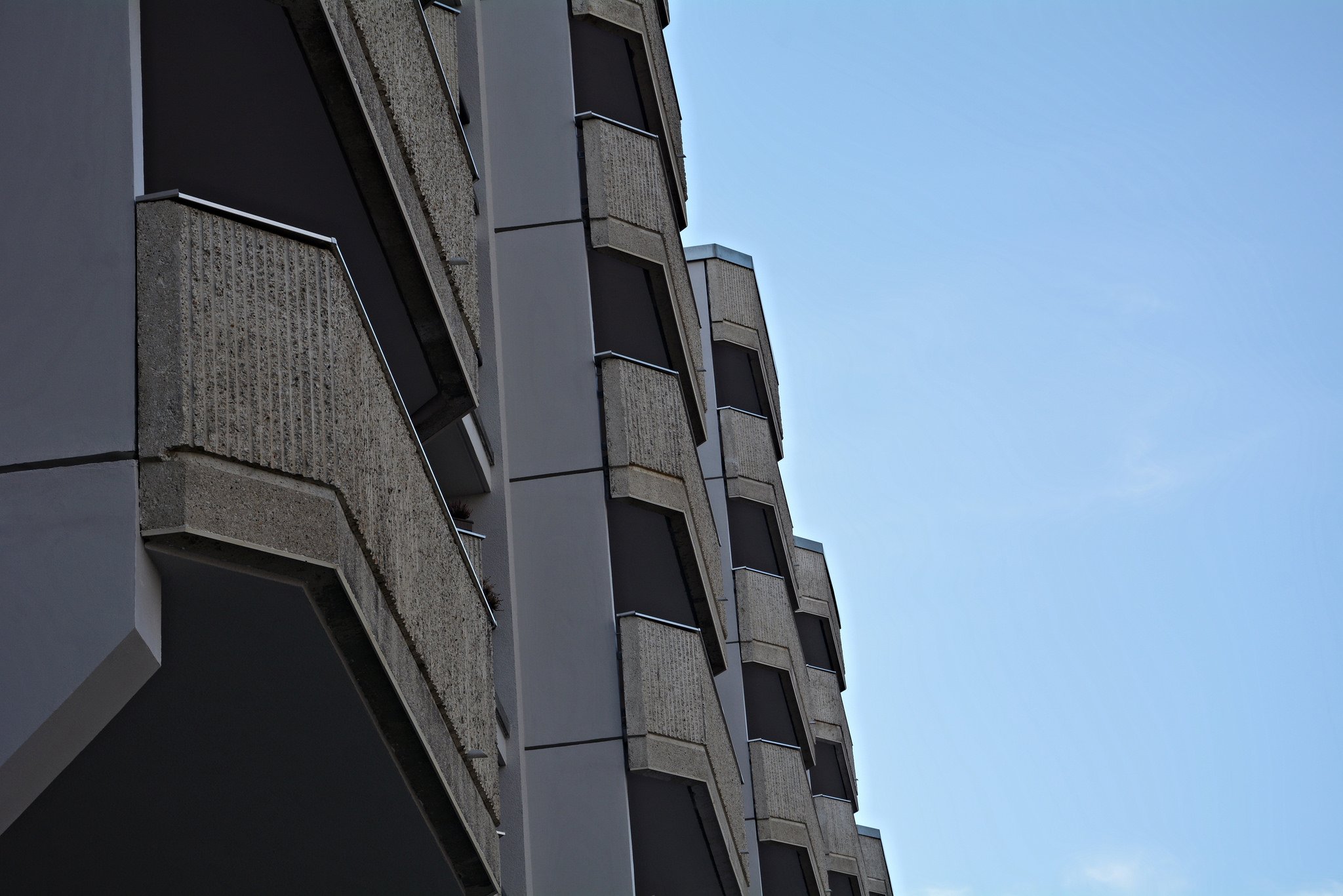 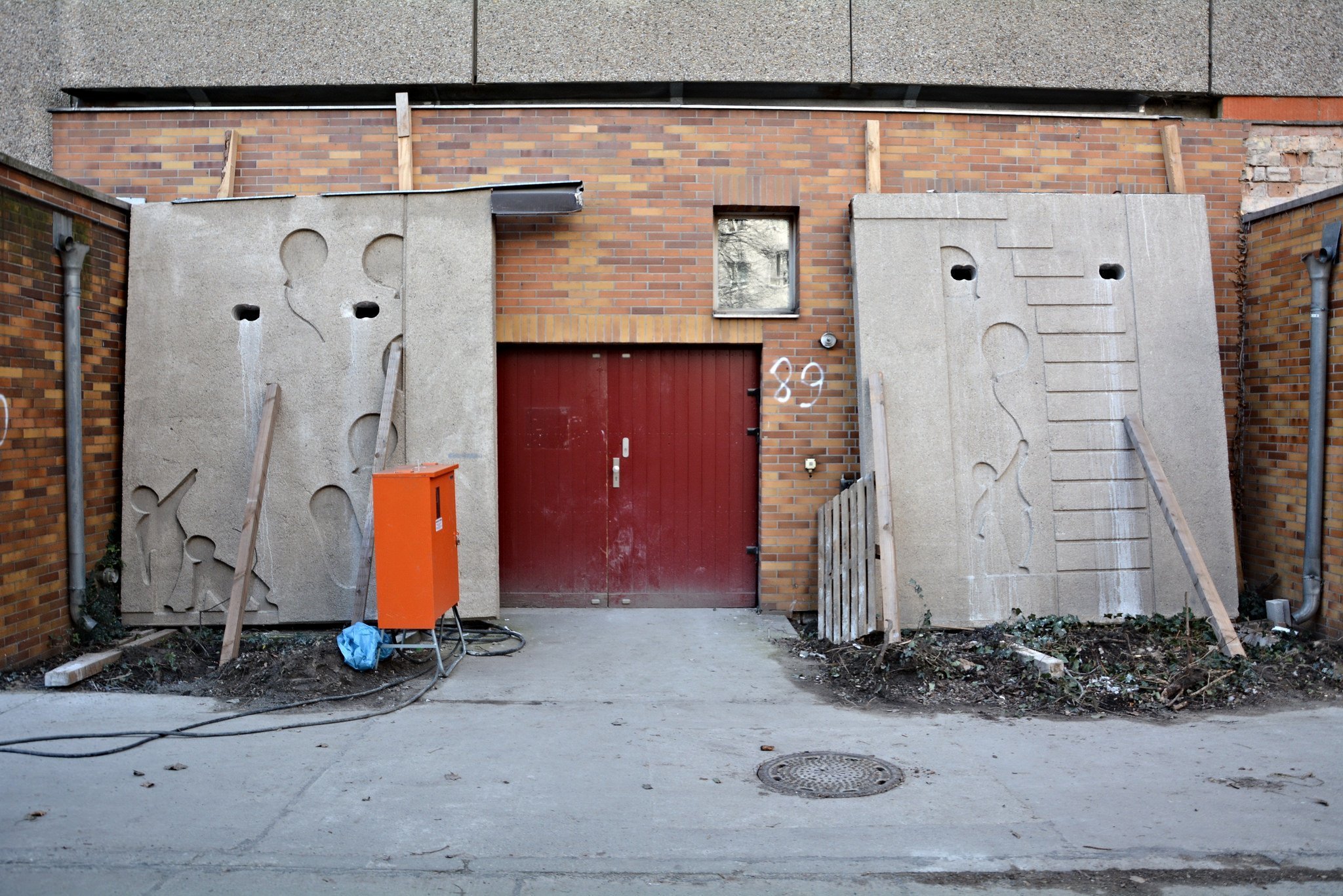 Though increasingly more common throughout the city, massive illuminated advertisements are still not the most common sight in Berlin (if one ignores the gaudy hotel signs). So what is one doing here – smack in the middle of the socialist paradise? With the death of the DDR in 1989, the capitalist west sought to leave its mark as quickly as possible. Who would be better suited to carry the flag than everybodies favorite sugary drink – and what better place to do it than here?

So when did Coca Cola set up its claim to the east? Some people say as early as November 1989, while others say “sometime” immediately after the Wall came down. With no exact timeframe floating around the internet – I reached out to Coca Cola who replied that the sign was erected in 1991.

Like the Red Star over the Kremlin, the Red Coca Cola Banner flies atop the prized socialist architecture heralding the commercialization of a united Berlin. 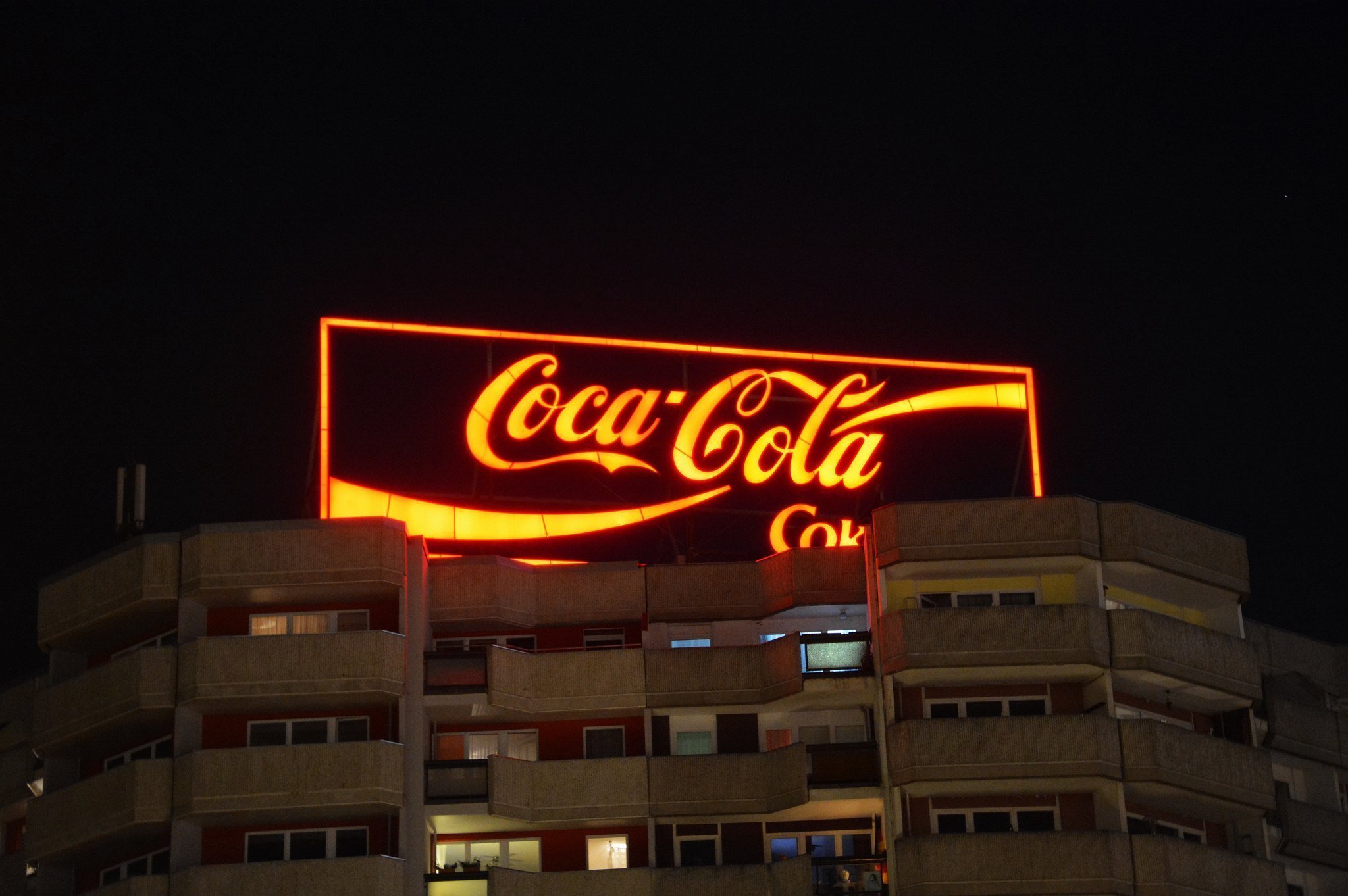 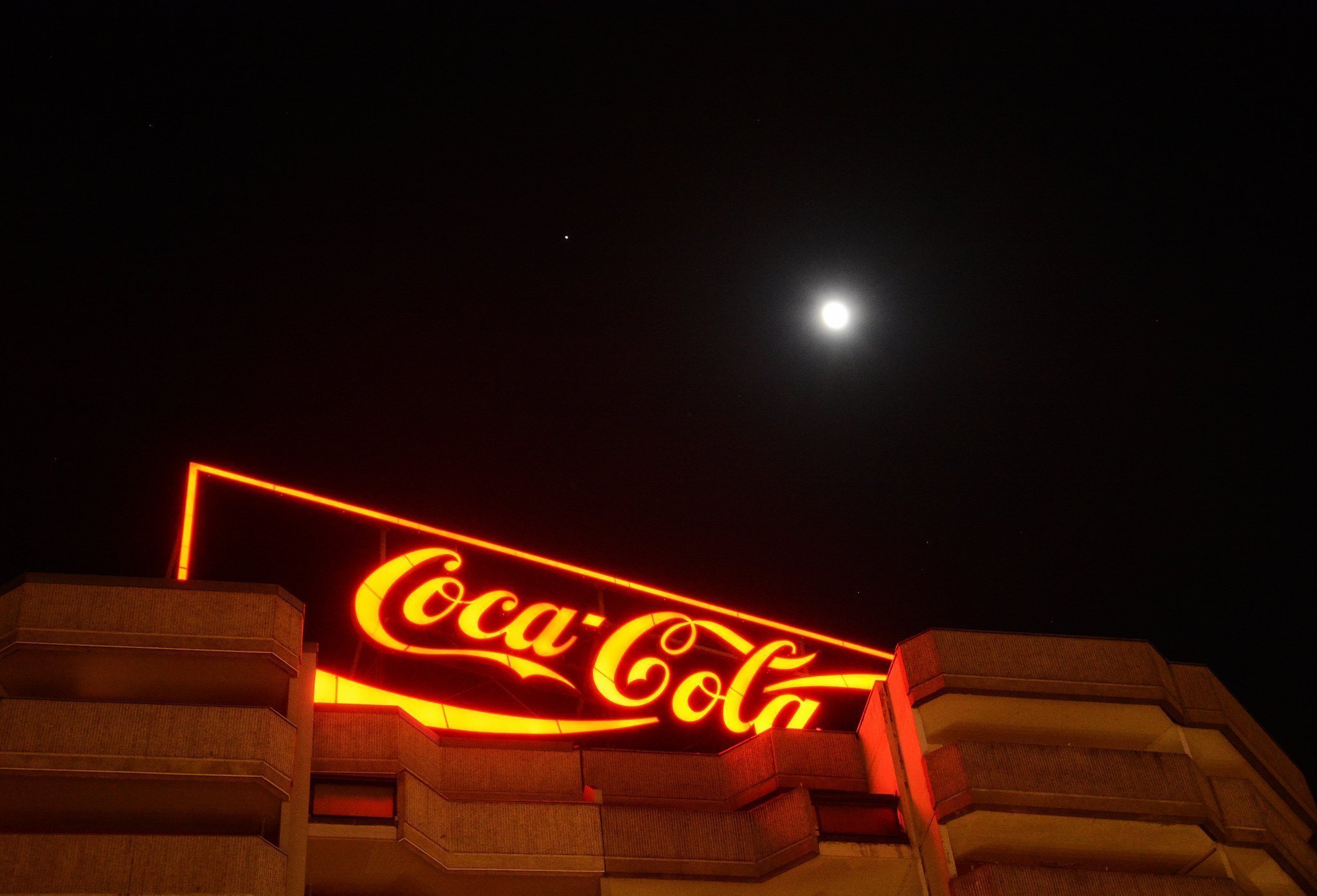 As of March 2015, it seems like the building is getting a capitalist makeover . The facade is being modernized and the concrete plates with the playing children and flowers have been removed. If you snoop around in the innenhof though you’ll find the last remaining two, their fate uncertain at this point. If you have a look at the Building with Google Street View you can still see the original facade, Flowers and all! That is until the next Google Maps Update…

The restaurant and the shops have long since closed, waiting to be replaced with something more expensive and out-of-place. Not that I lament the modernisation of this fantastically ugly building, but with its ugliness it did give the city some character, which is something increasingly rare in Berlin which is turning more and more into a glass boxed cube.

Talk a stroll through the Spittelmarkt and soak up the atmosphere. Let yourself be dwarfed by the Plattenbauten. If you have the chance, take a walk to the Spitteleck in the evening when you’ll be treated to Coca Colas hypnotic display of (arduously slow) flashing lights. Who knows how long they’ll be up there for.