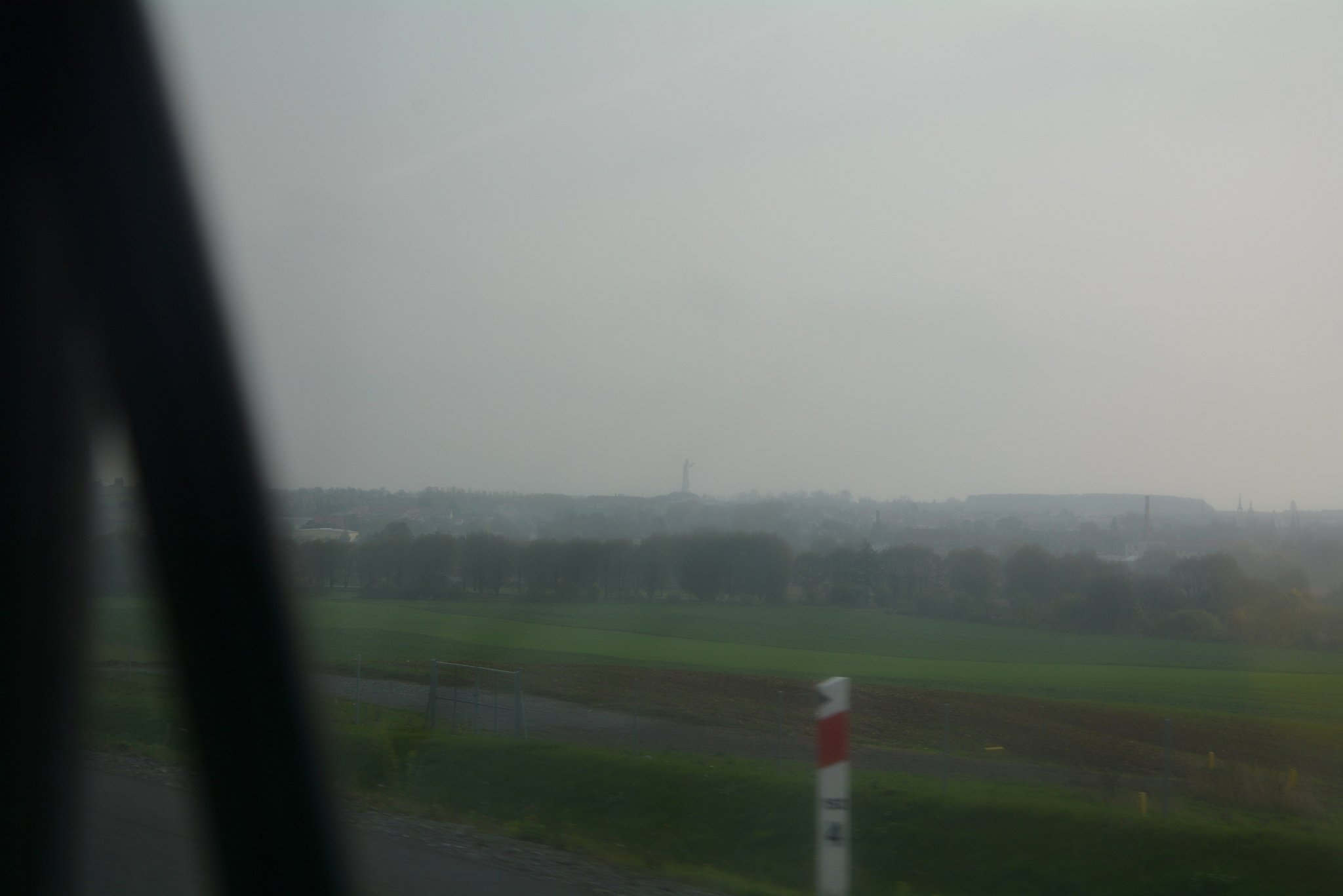 Its far too depressing to be Rio. The lack of Palm Trees and an abundance of Ukrainian Trucks could be more than a slight give away that something isn’t right. On the other hand, there’s a massive Jesus Statue in the background looming over the countryside.

The first time I had spotted this peculiarity was on the way to Poznan. Peering out of the train window at the Train Station in Świebodzin, I noticed the massive Jesus embracing the country side. At that point I knew I had to return and see it up close.

The Tallest Jesus Statue in the World is conveniently located in Świebodzin, Poland – just 180km east of Berlin. After convincing the wife that this was an opportunity not to be missed we jumped into the car and were on our way to Rio de Świebodzineiro. 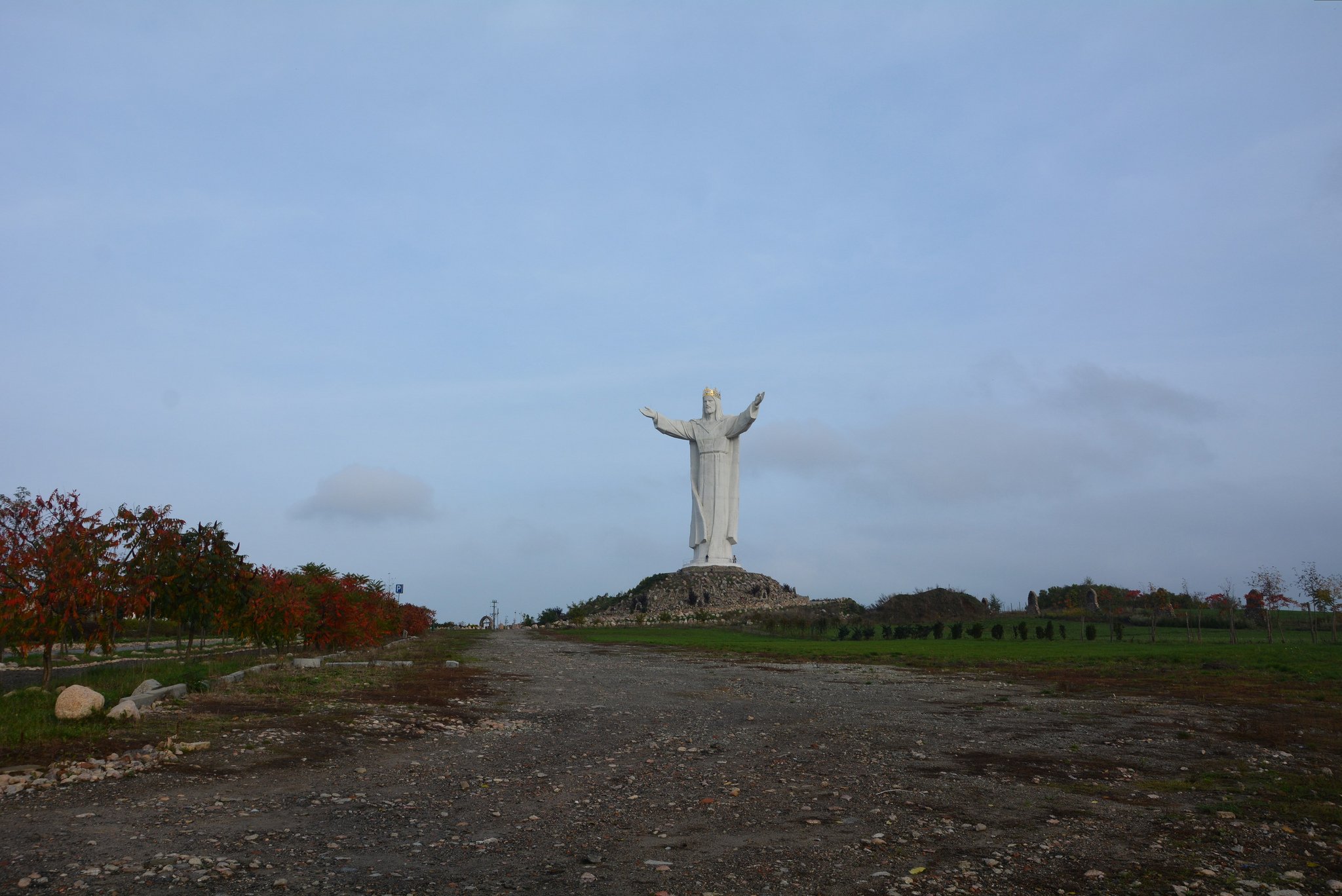 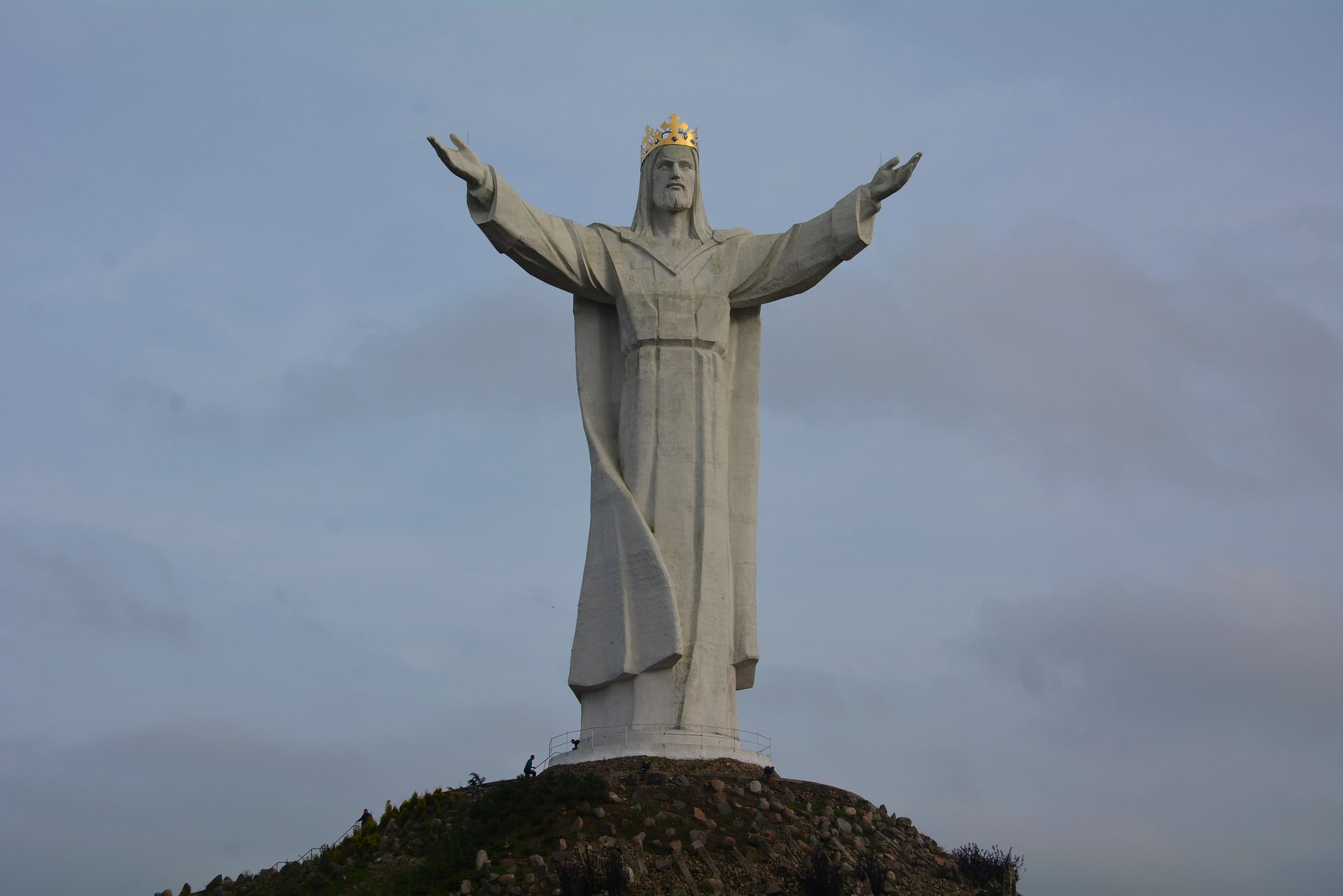 Now, who decided that it would be a good idea to build a 33 meter high (36 meters if you include the crown) statue in the Polish countryside? Obviously the local Priest Sylwester Zawadzki. “Christ the King” is both the Patron Saint of the City as well as of the Parish Church, so what better way to show your devotion than to build a massive statue in his honour.

After getting the whole thing designed by the Polish sculptor Miroslaw Kazimierz Patecki, the city council gave their nod of approval in 2006. Being solely funded by donations (the parish being particularly (and oddly) proud to point out that Canadians donated as well) the “Christ the King Statue” in Świebodzin was completed and officially inaugurated in 2010 . 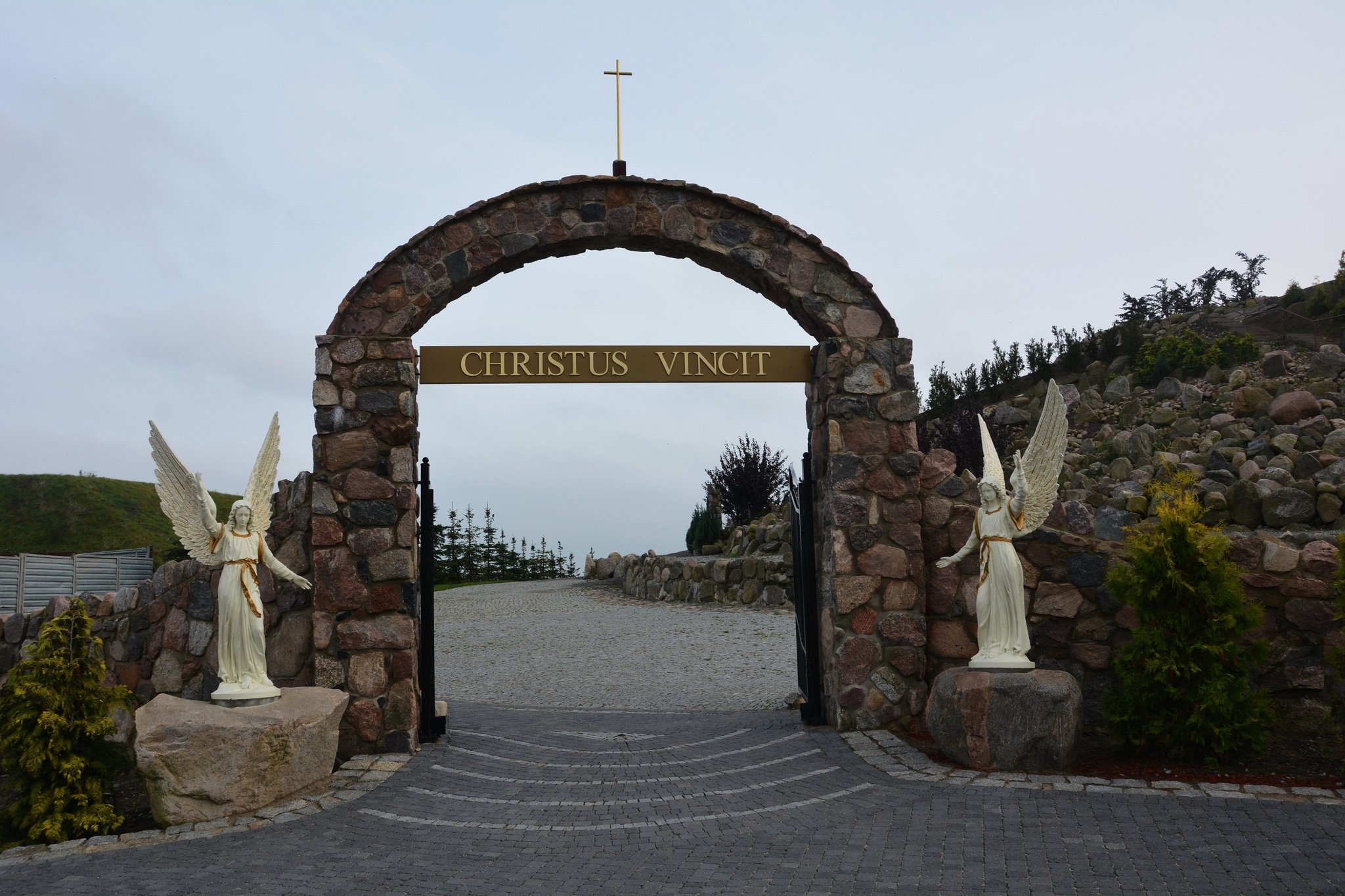 The Christ the King Statue was built on a 16.5 meter high “artificial” hill (read: a giant pile of rubble) and ended up weighing 440 tons. Without the crown, Jesus stands at 33 meters – symbolising the holy number 33, the age at which he was crucified. With its arms stretched out it has a span of 24 meters. If you included the Crown and Hill, the statue stands at an impressive 52.5 meters. Depending on who you ask, the entire thing cost between 1.5 to 3.5 million euros – which to be frank is quite a hefty sum of money – even for a massive Jesus. 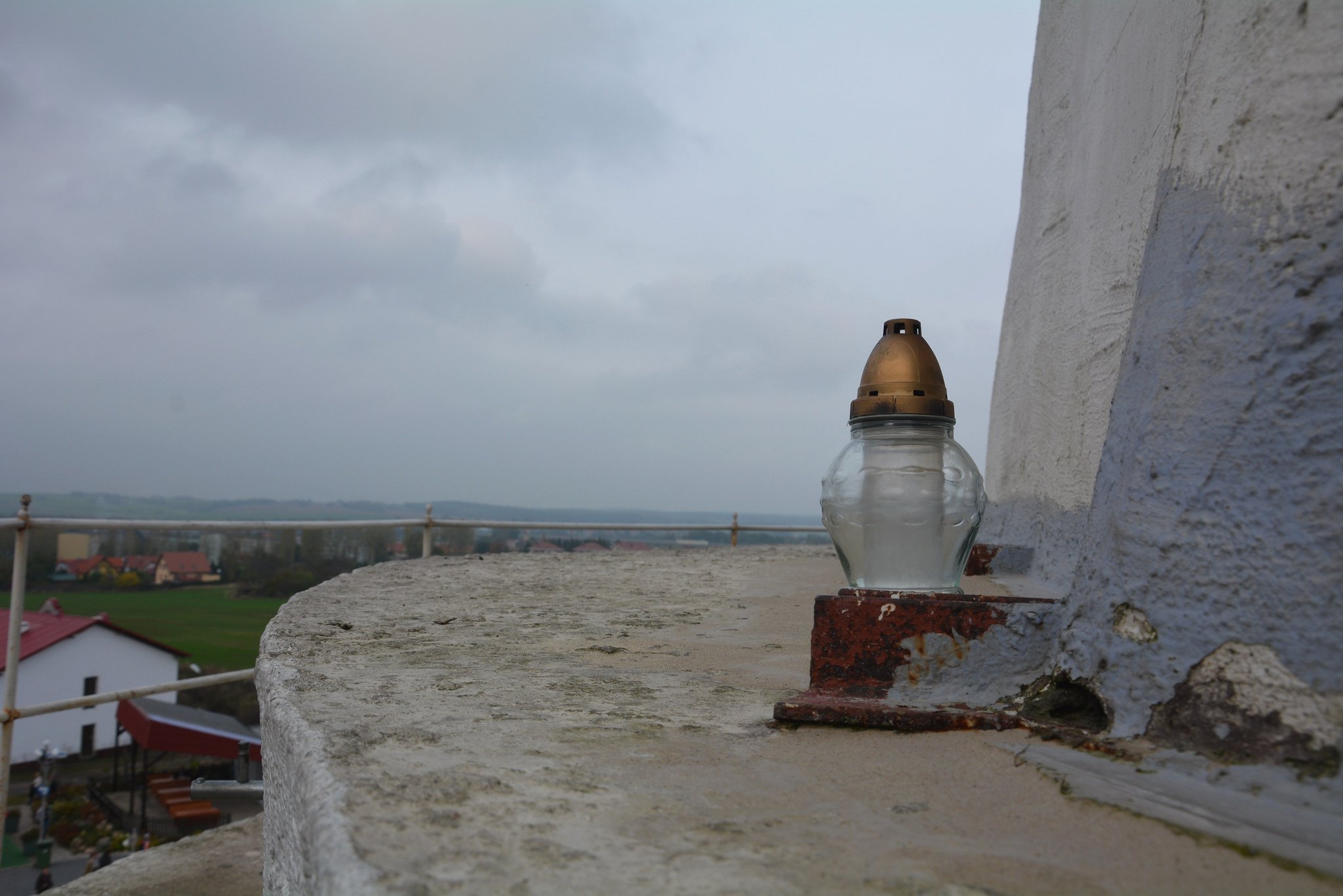 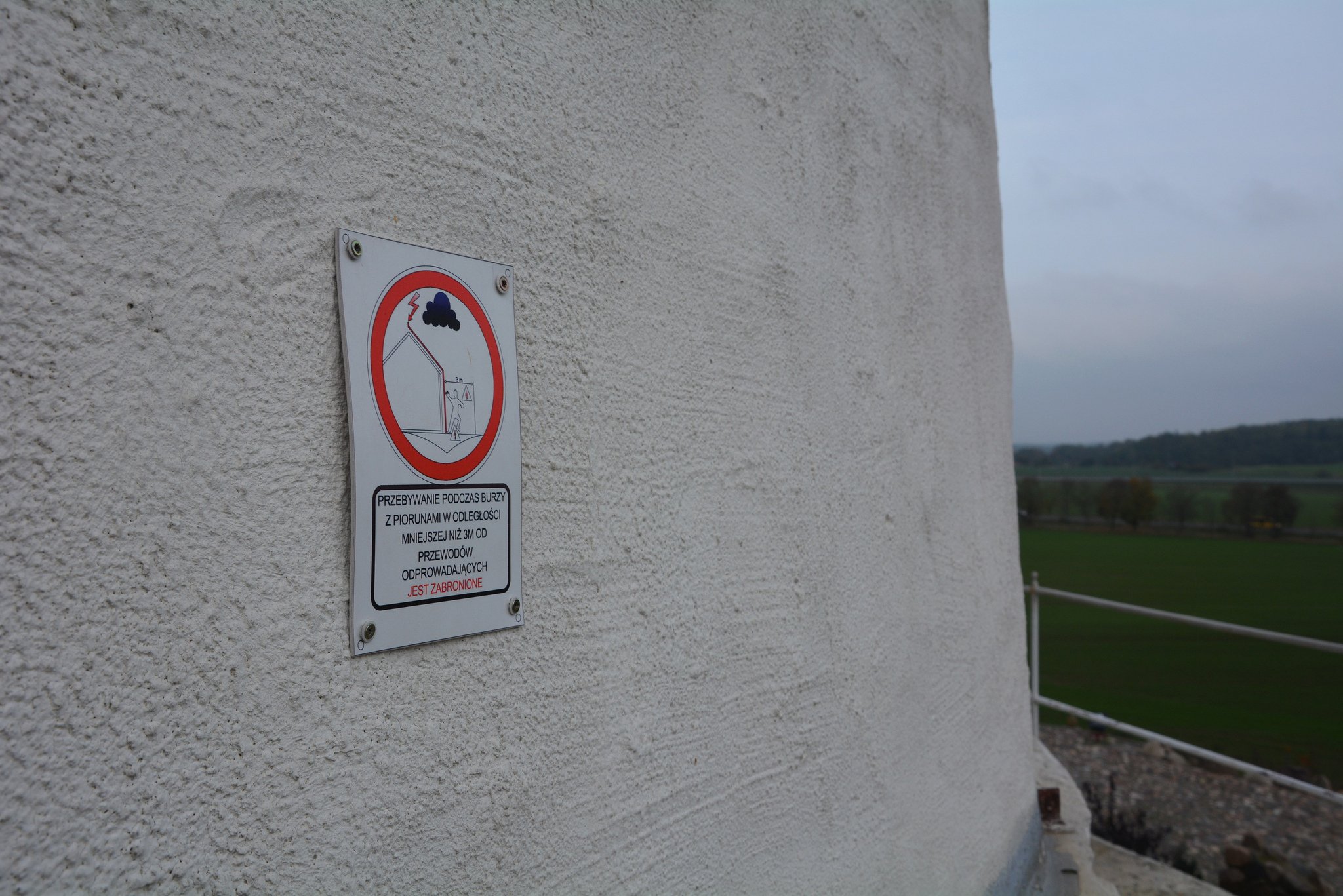 You can already spot the colossal statue from the Autostrady, and it is a strange sight. The largest Jesus statue in the world is boxed in by a field on one side, a highway on the other side, and a massive Tesco Supermarket right out in front. You might get the impression that the mighty lord is embracing the superior discounts of the english supermarket chain. Every little helps… 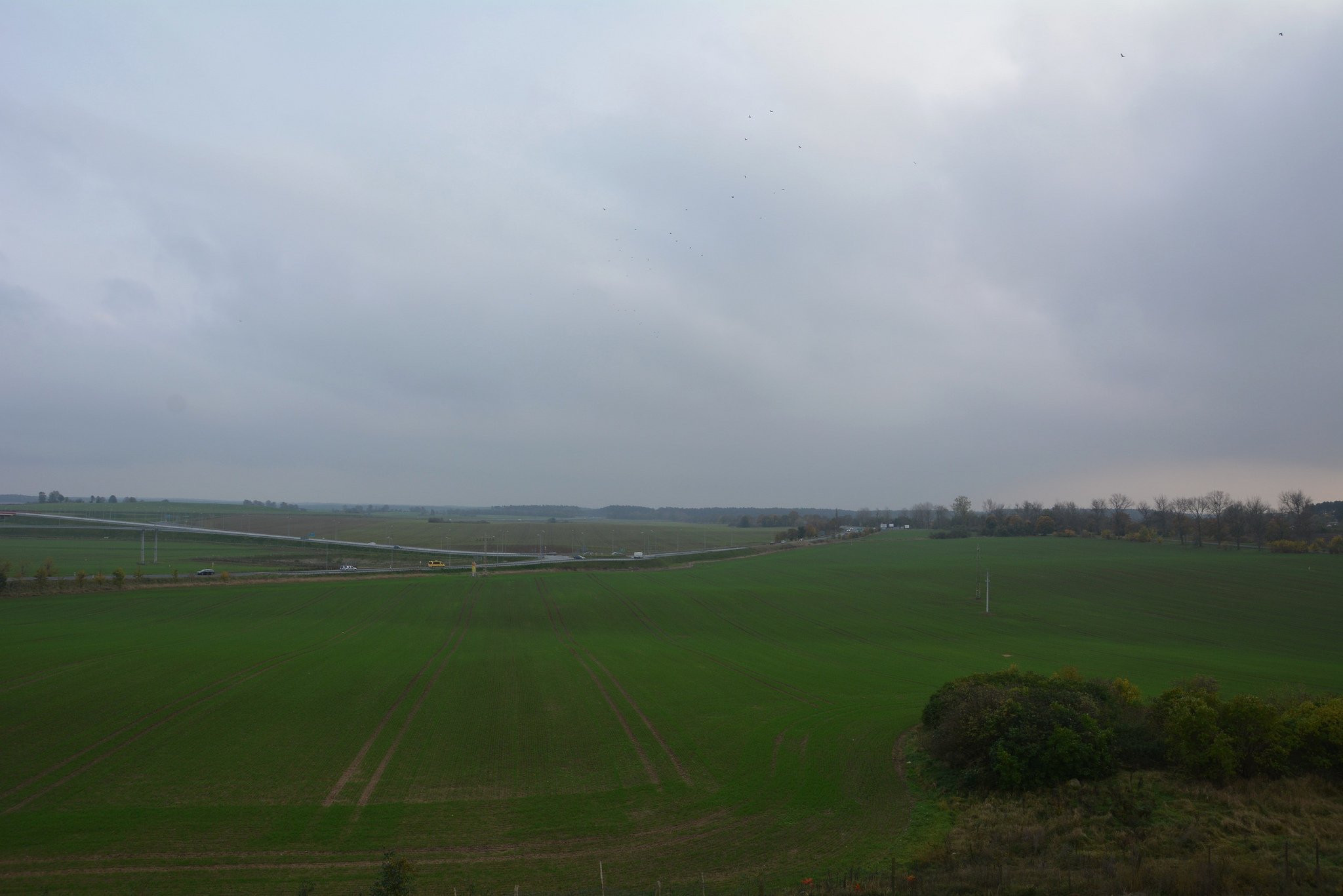 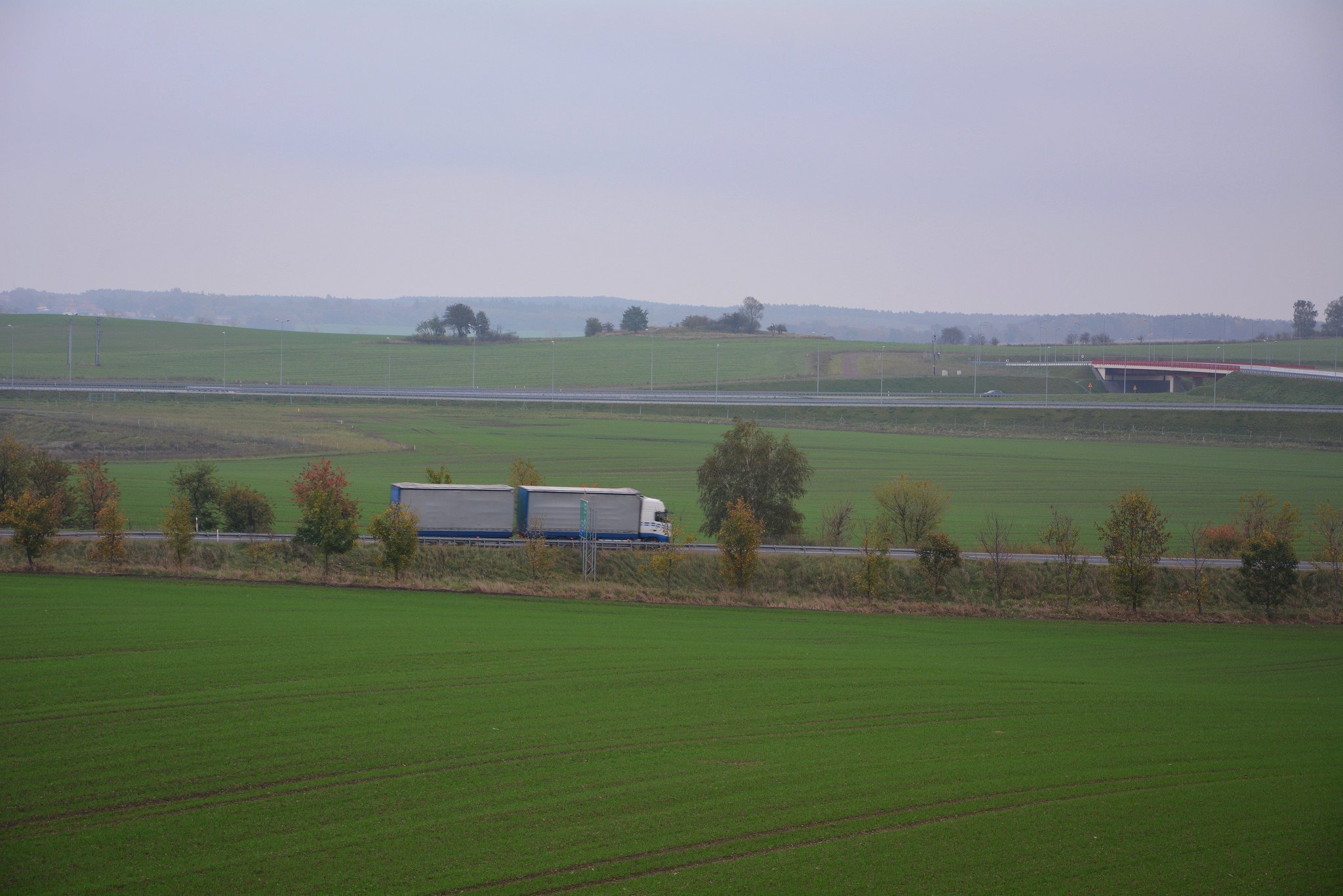 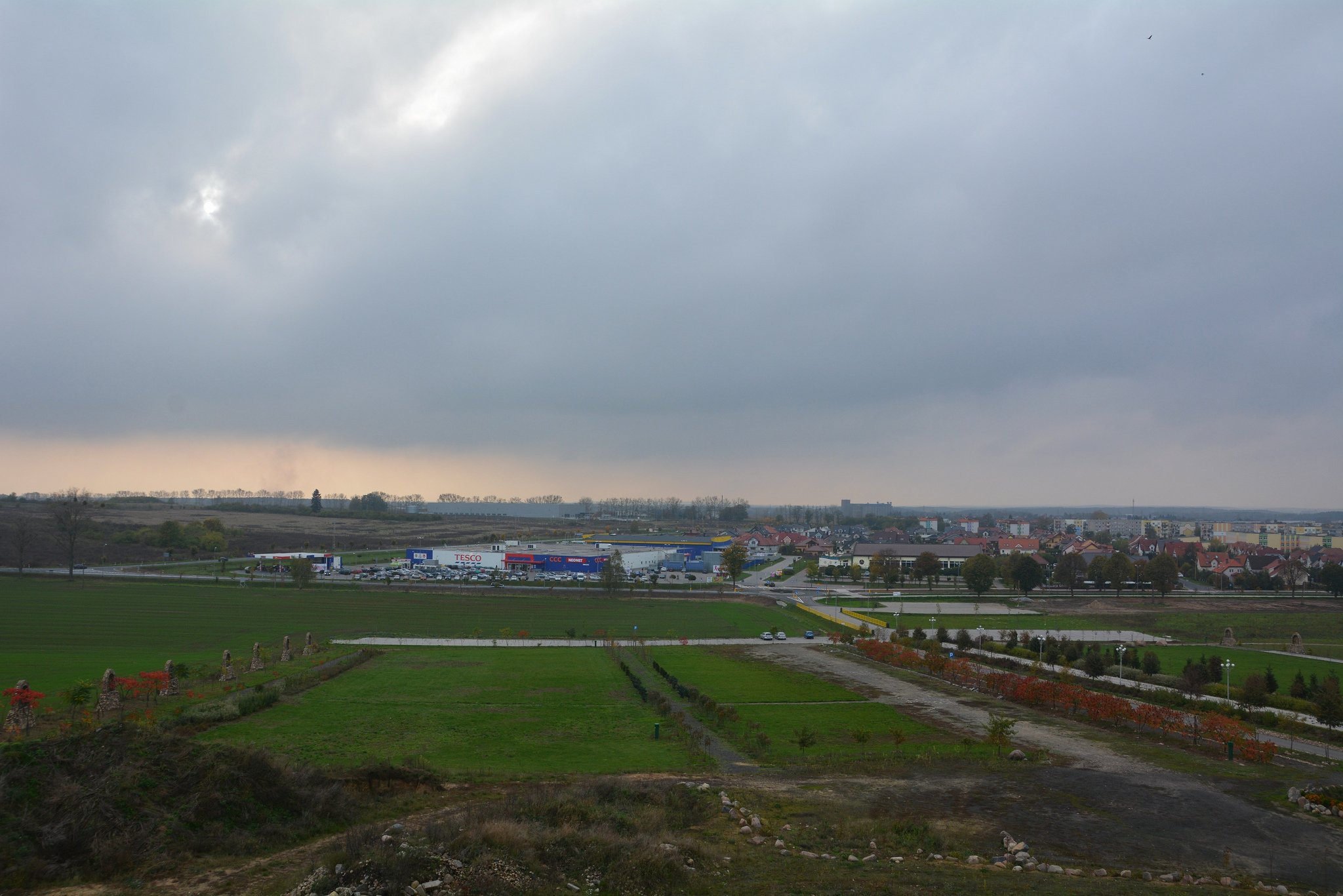 The parking lot was surprisingly empty (we were the only car parked there) – for some reason we had expected hordes of believers and tourists to come visit this gigantic monument, but it seemed like we were only to be joined by some polish youths and an old grandmother. More Jesus for us then.

We walked through the heavenly gates and spiralled our way up the hill which consisted of rubble and what seemed like construction site offshoot. For a brief moment I pondered about the stability of this man-made hill, and if it was structurally sound enough to be holding 440 tons of Jesus. Seeing the rusting foundation peek out from the gravel wasn’t utterly faith inspiring. 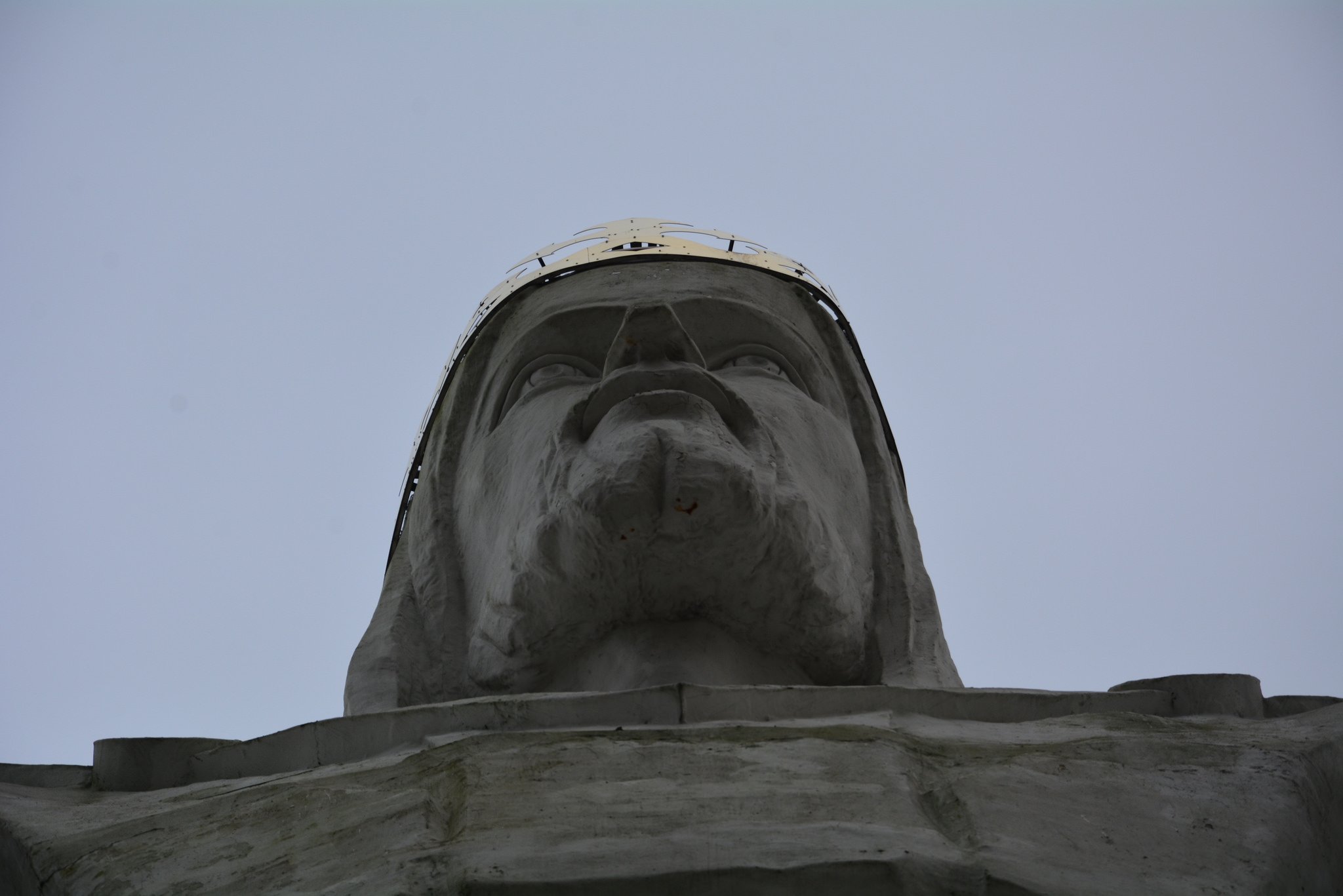 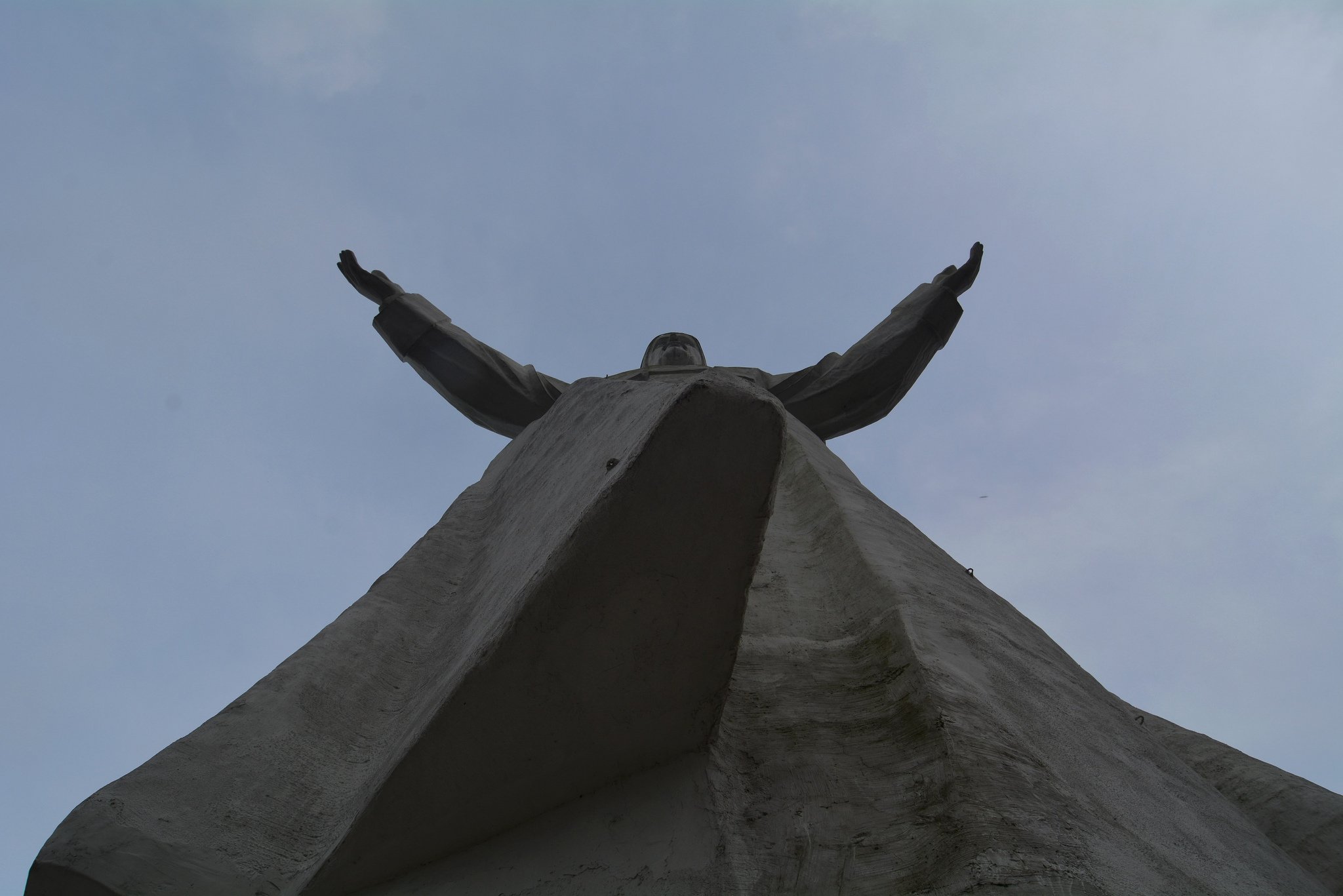 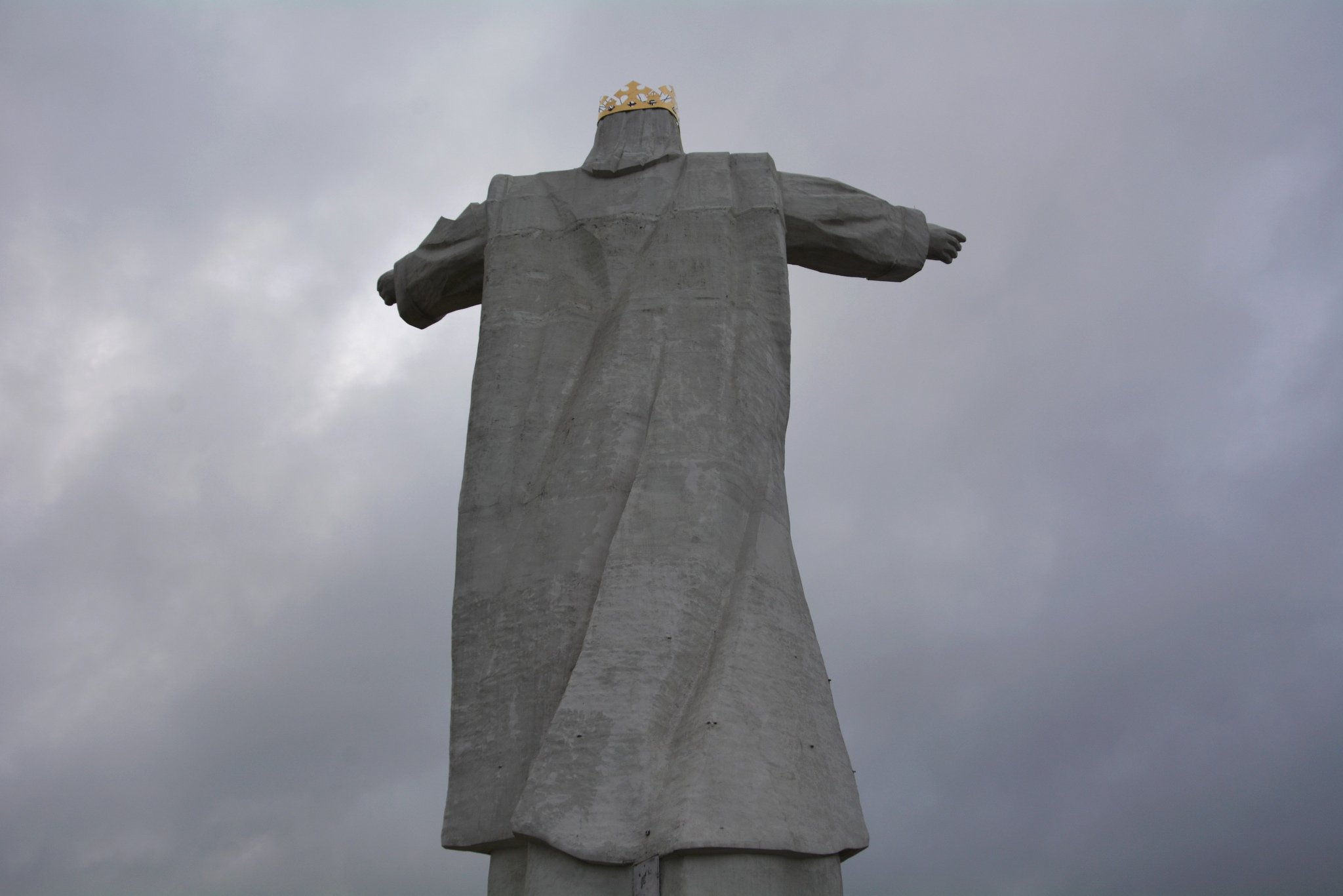 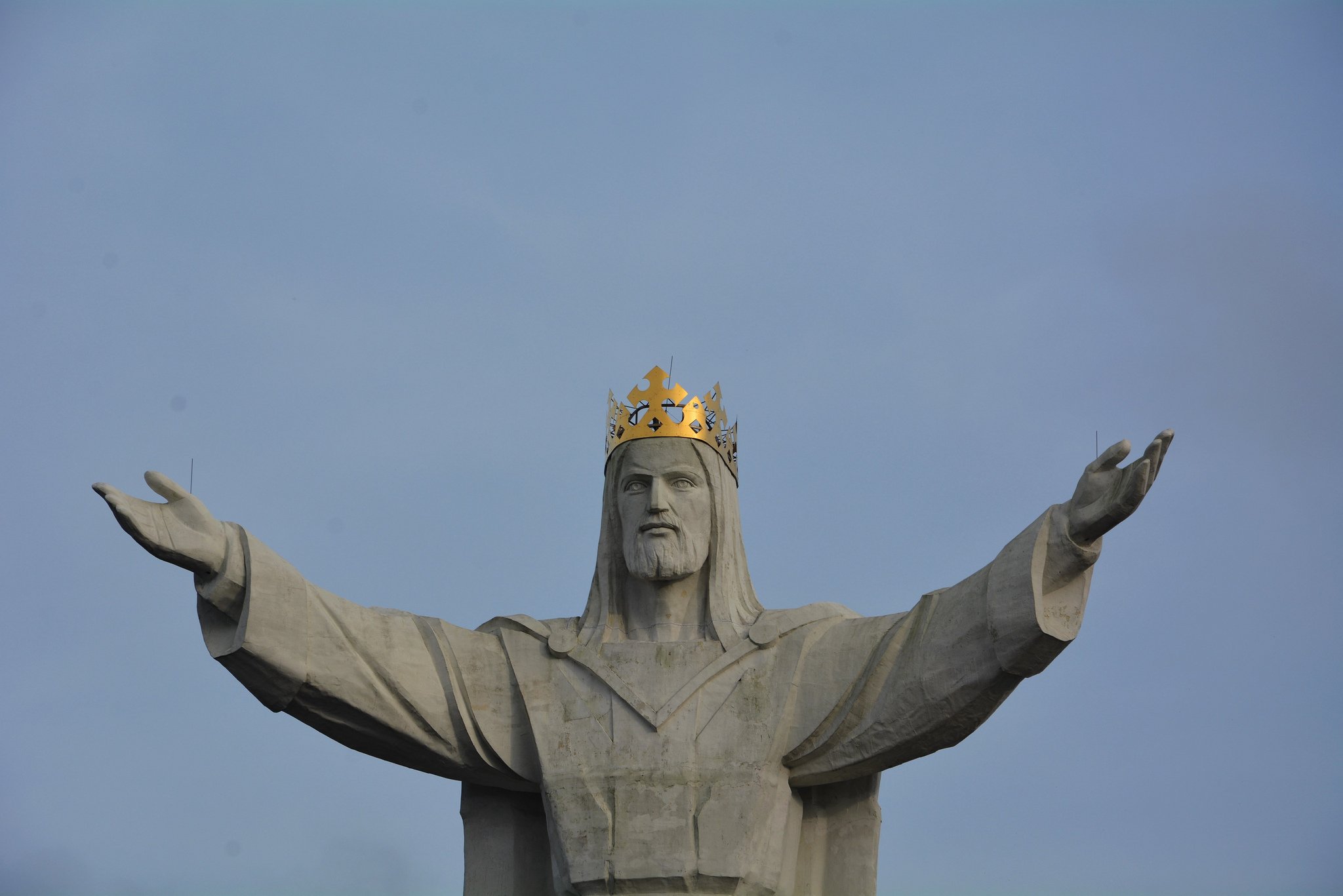 The view up from the below base of the statue gives you an interesting feeling for how large it actually is – while the view from the base itself was rather underwhelming. Tesco, Field, Autostrady, Parking lot. This is one of those places where the view from afar is better than at the location itself.

The moment we began our descent, 2 jam-packed tour buses arrived.Seems like someones prayers were answered after all.

If you want to visit the worlds largest Jesus statue in Poland, there are multiple trains from Berlin (and other cities) to Świebodzin. Both the Train and the journey by car take roughly 2 hours (from Berlin).