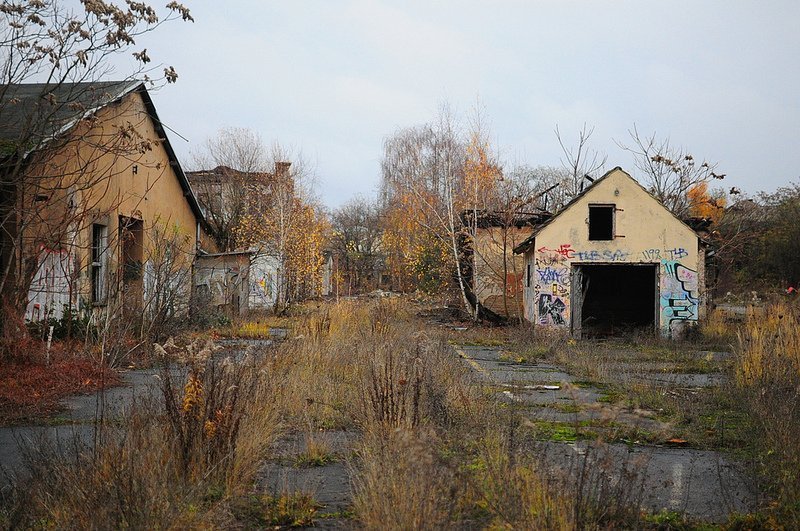 Back in the day, Berlin had 6 Airports – Schönefeld, Tegel, Tempelhof, Gatow, Staaken, and Johannisthal. 4 of those have since been closed, some converted into parks and nature reserves, others into museums – and some, such as the old Airport Johannisthal turned into the home of the  VEB Kühlautomat, one of the leading manufacturers of cooling and freezing units in the DDR. 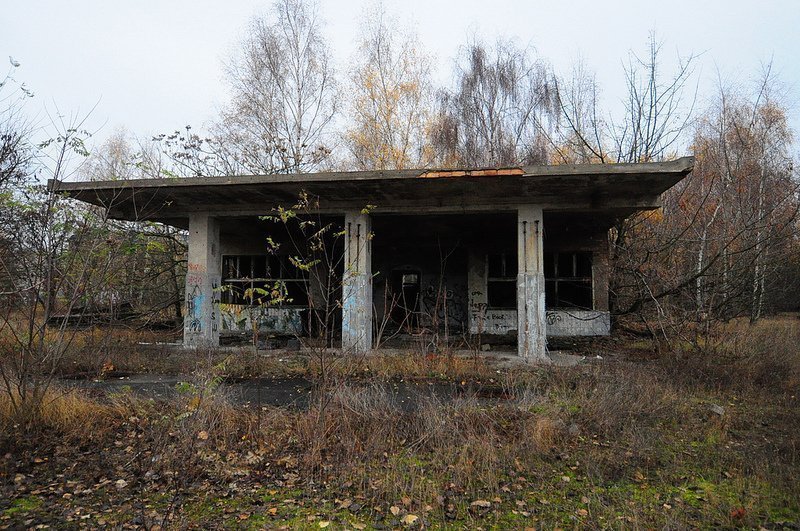 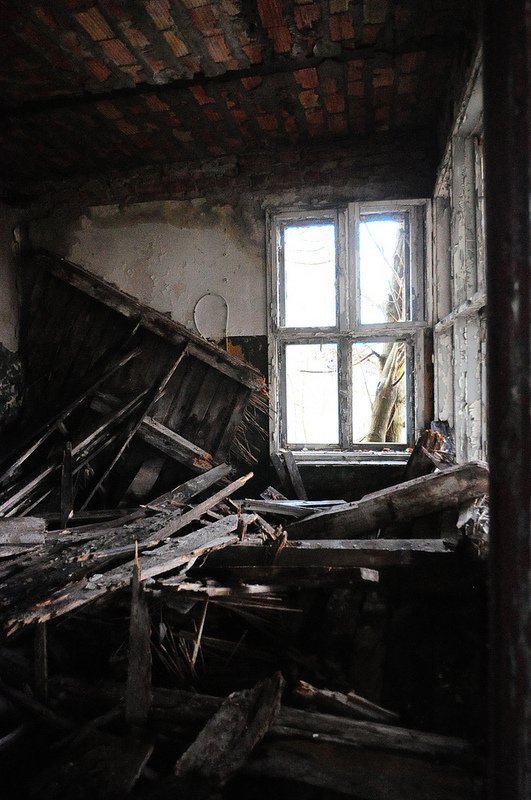 The Flugplatz Berlin-Johannisthal openend in 1909 and was Germany’s second Airport. After The Berlin-Tegel Airport was constructed in 1923, civilian flight traffic drastically began to decrease from Johannisthal. Over the years, the military took hold of the airport and set up the “Deutsche Versuchsanstalt für Luftfahrt” (DVL) – whose aim was to aid the secret rearmament of the German Wehrmacht/Luftwaffe. After the end of the Second World War, the Soviets used the Airport for a year and then pulled out to the larger complex in Schönefeld. At the same time, the Soviet Military Administration established the „Autoreparaturpark V“ – a vehicle repair complex – on the western end of the Airfield.  With the decreased military use of the Airfield, the Autoreparaturpark, including all of its machinery was moved out to Bernau. 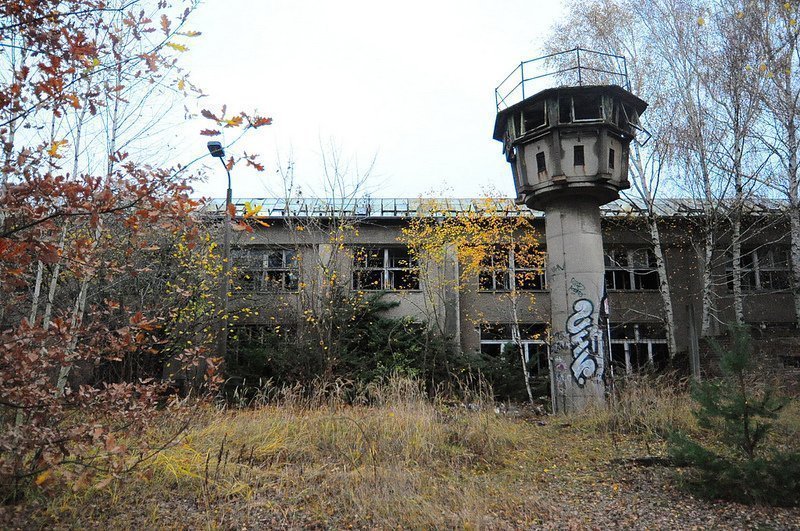 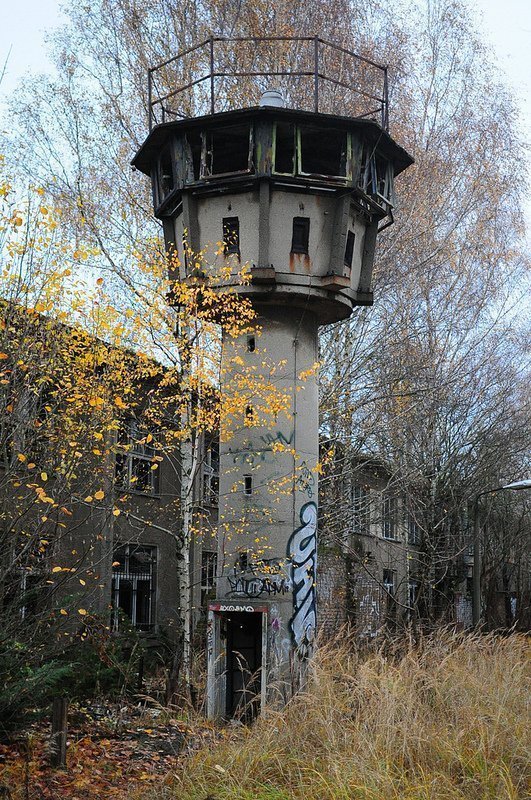 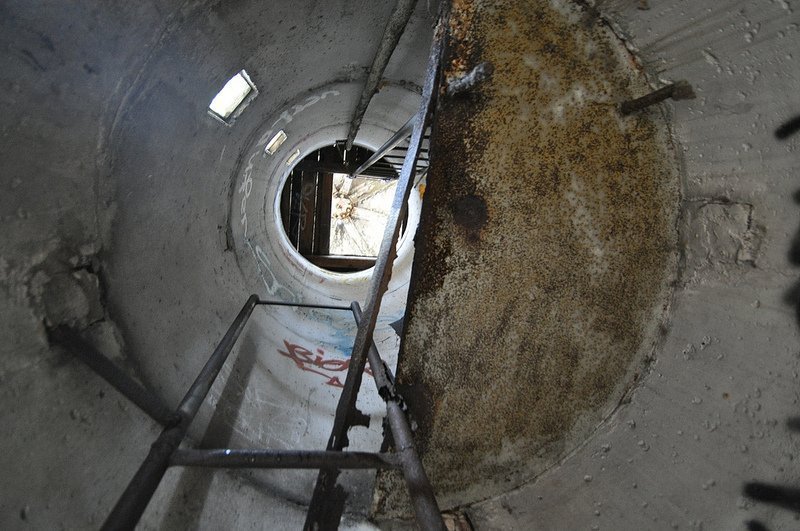 The Magistrate of Groß-Berlin decided that instead of leaving the huge complex empty, a “Kältebetrieb” should be set up in the empty factory halls. The VEB Kühlautomat was officially founded on the 5 of April, 1950. Its main task initially was to cover the high demand for repairs and servicing of commercial and industrial fridge units, and with the development of commercial fridge units. 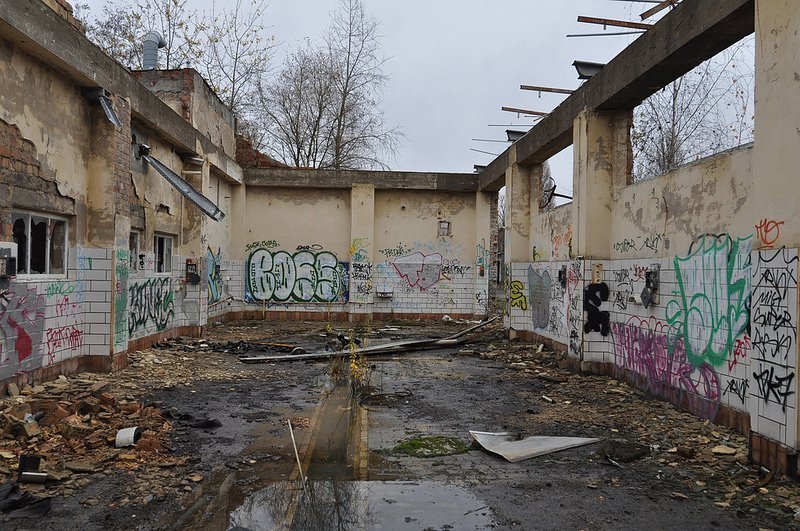 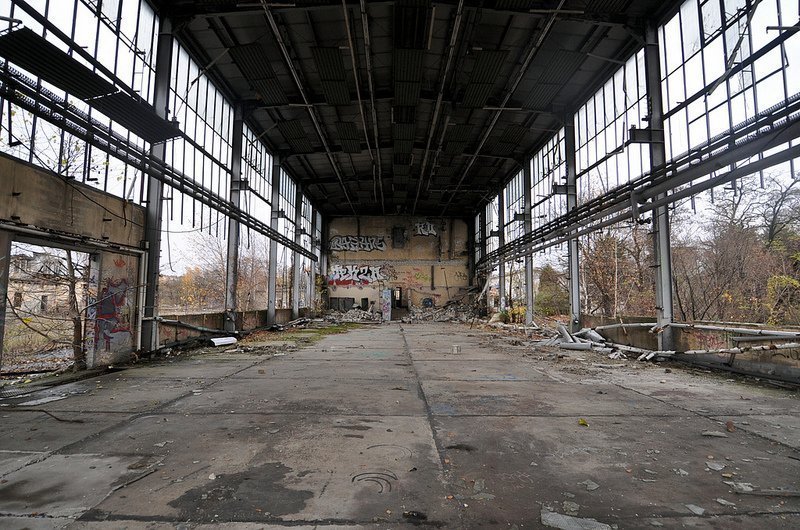 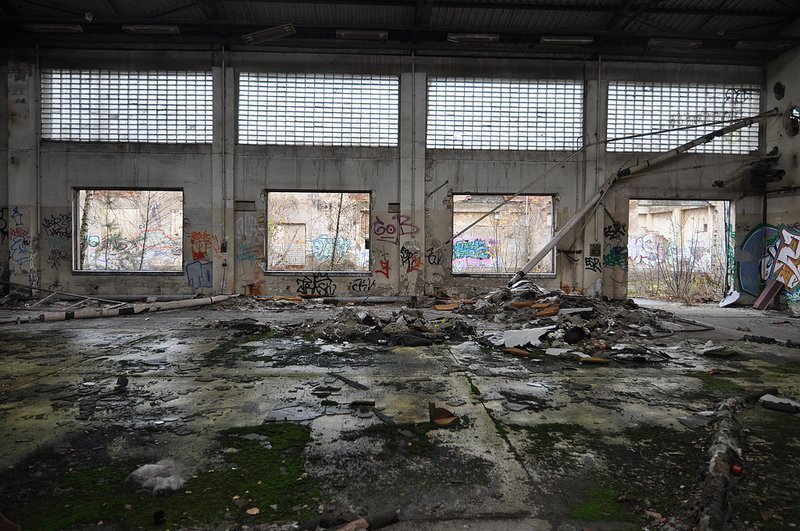 By 1957, the VEB Kühlautomat had over 1000 employes, and achieved an annual income of over 12 million DM. 1957 played a pivotal role for the future of the VEB, as that year the development of food preservation focused mainly on fish. This meant that there was an increased demand for cooling units for fish trawlers and boats. With the production shift from comercial fridges and freezers to Industrial Cooling units for boats, the VEB Kühlautomat was merged together with the VEB Kälte (another fridge producer). In 1967, the VEB Kühlautomat was merged into VVB Schiffsbau – a shipyard. The development, design and production now concentrated primarily on  Maritime Cooling Technology. 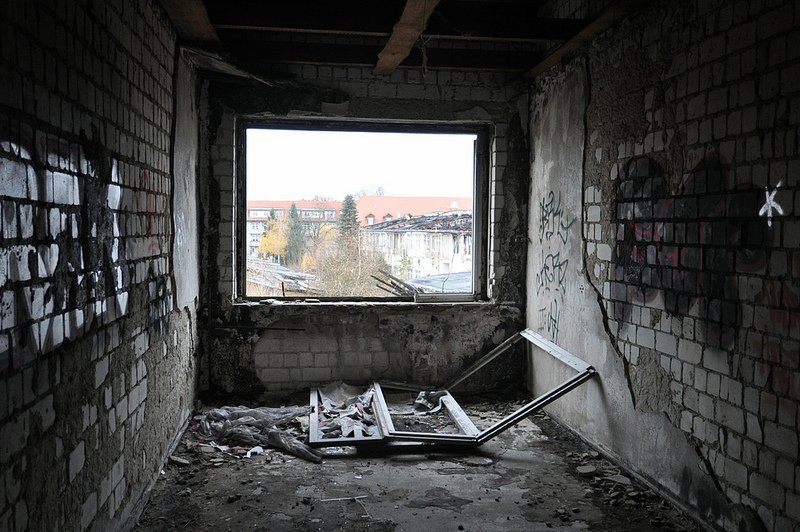 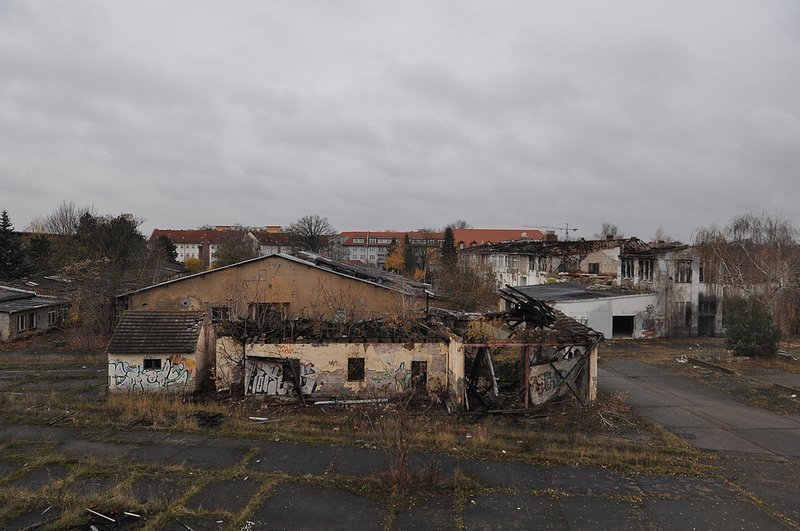 With the dissolution of the DDR, the VEB Kühlautomat – now known as the “Kühlautomat Berlin GmbH“ was handed over to the Treuhand  to “ensure” a smooth transition from socialist planned economy into the social market economy (the abandoned nail factory shared the same fate). After structural and operational changes (i.e. firing lots of people), the company showed signs of being able to compete in the free market. Despite the positive operating results, the Treuhand decided the sale of the company in 1994. The “GEA AG” (one of the largest system providers for food and energy) successfully bid for the company and split it up into 5 separate – but intertwined enterprises. The production in Johannisthal was slowly phased out, until the whole complex was shut down in 1996. 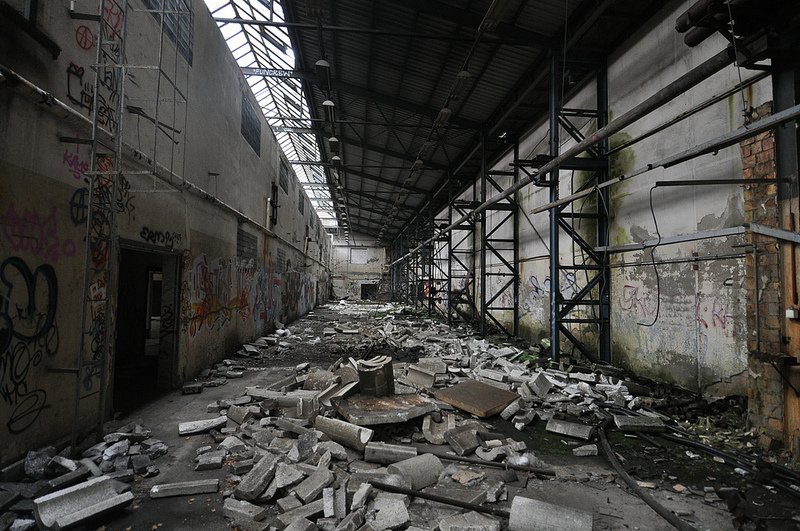 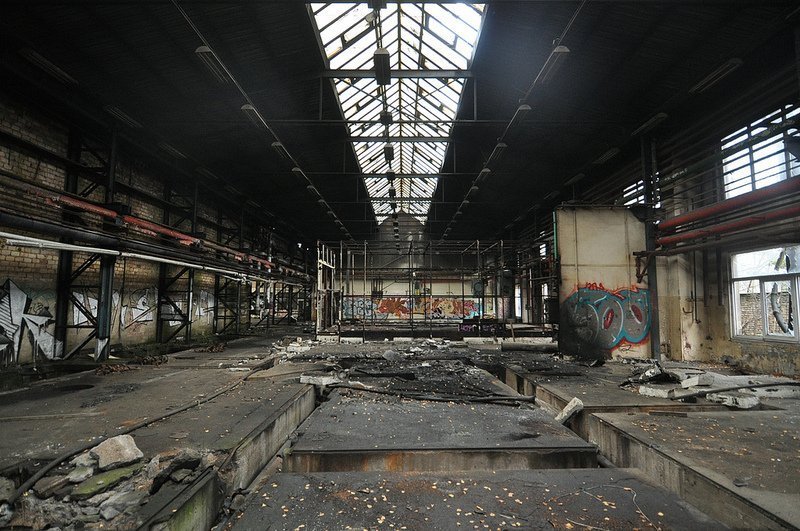 Since then, the property has been the target of scrap metal thieves, vandals and the usual assortment of idiots. Last year several buildings were set on fire causing widespread damage. The whole complex is enormous – with dozens of factory halls and buildings to be explored. Most of them have been gutted and smashed, but not all are abandoned. While strolling through an office – a giant fox jumped out, scaring the bejesus out of me. Foxes aside, parts of the complex is still being used by somebody. I spotted several parked cars which seemed to be in need of a valeters service and a running generator (ive encountered quite a few of those recently), so I didn’t stick around too long to find out what was going on there. 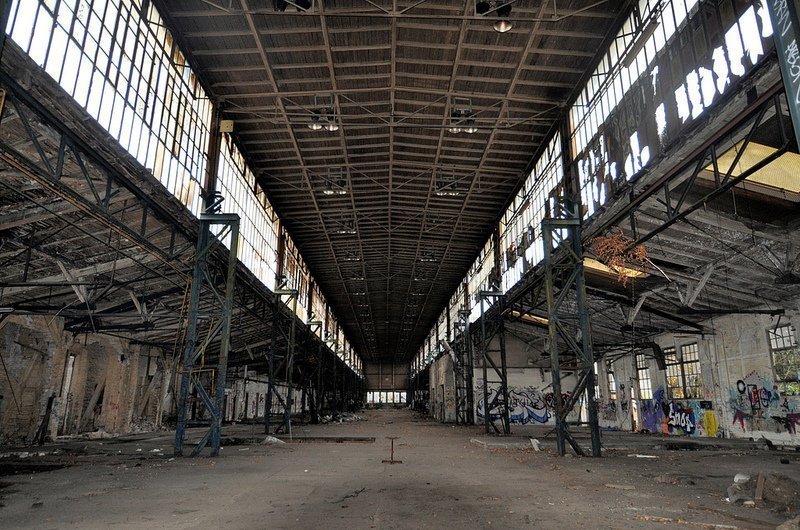 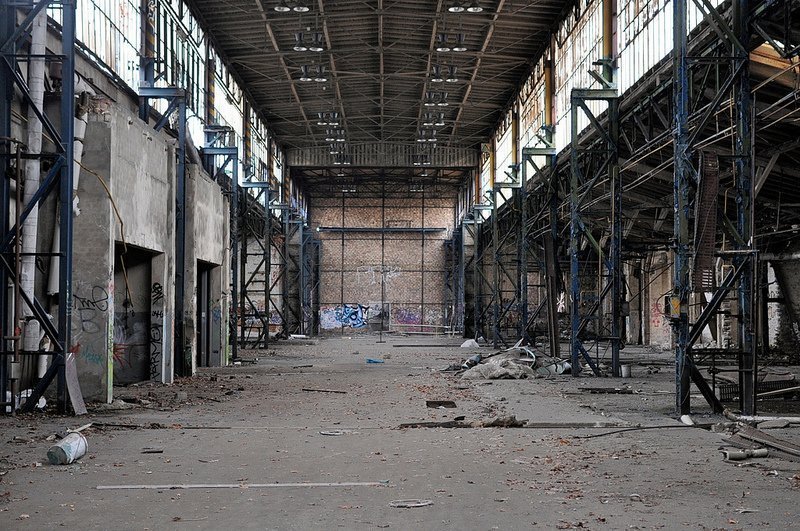 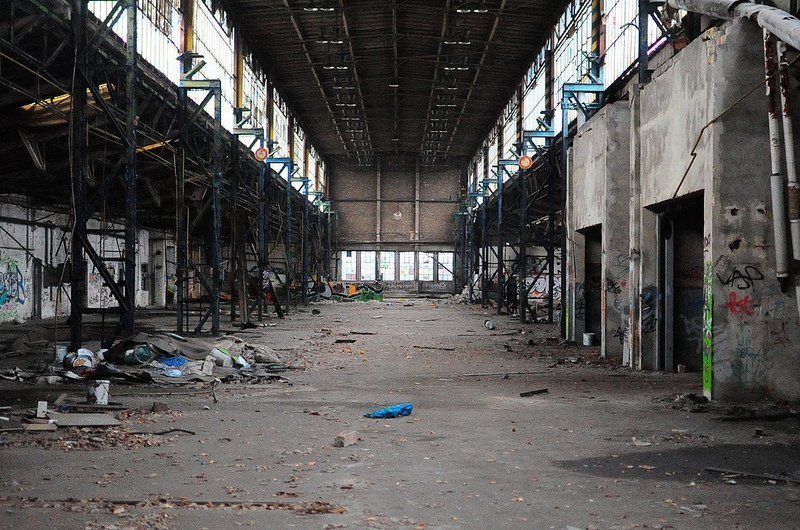 A quick line about the creepy tower – that actually belonged to the Johannisthal Airfield (built by the soviets), and any Berlin visitor will instantly recognize the similarity between it and the towers that used to guard the Berlin Wall. With daylight in short supply during the winter months – and the enormous size, this is one place worth exploring again. For lovers of giant factory halls, this place is well worth checking out.
VEB Kühlautomat
Address: Segelfliegerdamm
12487 Berlin – Johannisthal
Public Transport: Take the S8, S9, S42, S45, S46 or the S85 to Adlershof and then walk down the (its best to cycle though) Groß-Berliner Damm. Dont get off at the Betriebsbahnhof Schöneweide, theres no way to cross over to the other side.