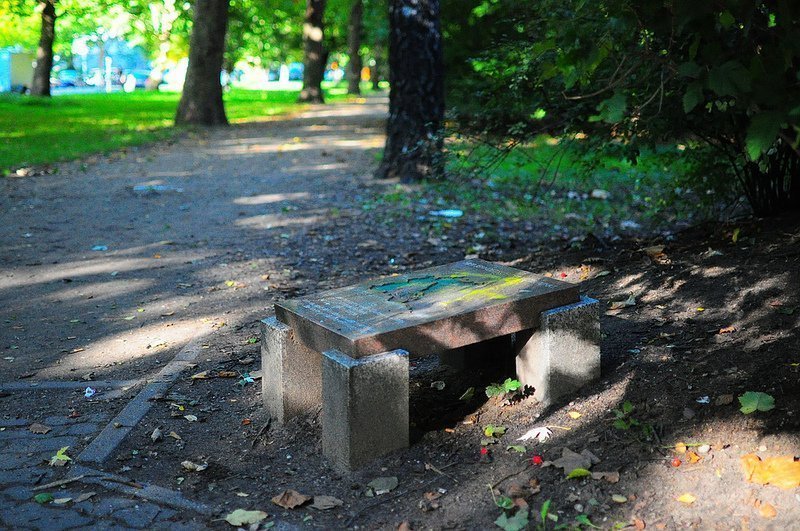 Berlin Mitte. U-Bahn Station Mitte. The Rotes Rathaus. They are all liars. All of them claim to be the center of Berlin but none of them are. People have always been fascinated with the concept of the Center – be it the spiritual, geographical, or the shopping center (see what I did there?). While every place in Berlin that ascribes itself the pre or suffix  “Mitte” is wrong – there is an actual official Geographical Center in Berlin. And it lies in the heart of Kreuzberg. Or Neukölln. Whichever you choose to believe.

In theory Berlin has had more than just 1 center. It has 4. But how come? Well that’s relatively easy to explain:

The historical center: The first of Berlins centers is/was marked by the Postmeilensäule – an Obelisk shaped milestone which was established by order of Frederik the 3rd in 1730 as the zero mile point on the route to Potsdam. This marker was used as the mathematical starting point to calculate all distances in Prussia. A reconstructed version can be found at the Dönhoffplatz, in the Leipziger Straße.


The Post Unification Center: After the (re)unification of Germany, Berlin needed to define a new Benchmark (a survey point)- so in 1991 the city picked a wonderful spot on the intersection of the Leipziger Straße and Seydelstraße as its new measuring point to other cities. If you look closely – its just a few meters down the road from the Postmeilensäule.


The Political Center: So despite saying in the first paragraph the Rotes Rathaus is a liar – it is still considered by some as the center of Berlin. Actually, the Flagpole on top of the City Hall is considered as the Nullpunkt – the Zero Point for the Statistischen Landesamtes für amtliche Karten (the statistical regional office for official maps). So what that means is – if you imagine that Berlin is a point on a map (or globe) the coordinates of the flagpole are used as the location of Berlin.

And Finally the Geographical Center: The Flächenschwerpunkt – the geographical center of Berlin (52°30’10″N   13°24’15″E) is situated in Kreuzberg in the Alexandrinenstraße. It was first calculated in 1990, and then again confirmed in 1994. Despite the fact that Berlin is constantly growing (thus moving the center of Berlin) – the district decided to lay down a granite plaque in 1997 commemorating its status of being the center of Berlin. Youll find the plaque on the left corner outside the football field.


Or so they thought.

The Contender: Arnold Zenkert, a geographer and the retired head of the Potsdam Planetarium used the 4 point method in 2010 (computing the largest distance between the most norther and southern point, eastern and western point and then halving them) and calculated that the new geographical center of Berlin lies in Neukölln, right in front of the house on the Spremberger Straße 4. (52° 29′ 38” 13° 25′ 26”) 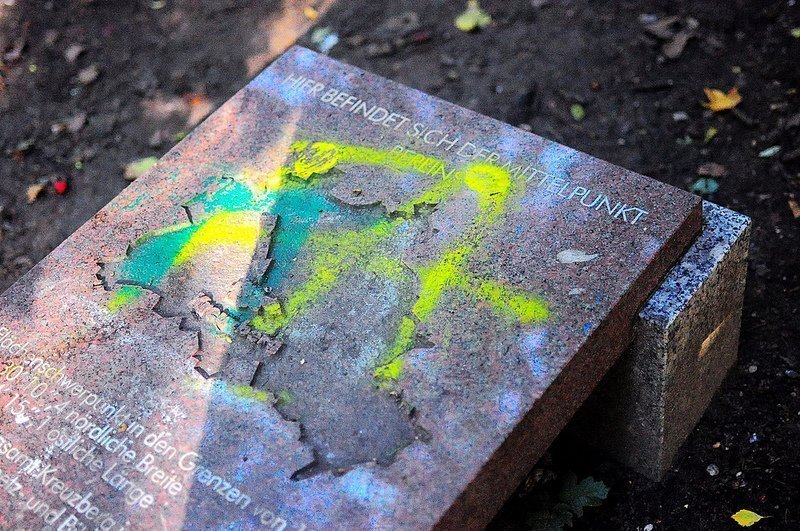 So while both the historical center and the post unification center were of mild interest (I shall ignore the Political center for now) – they weren’t really what we were looking for. The Geographical center in Kreuzberg had a plaque – and anything that has a plaque is official.  So we loaded the geolocation points onto my phone and cycled through the back streets of Berlin in search of this magical location. 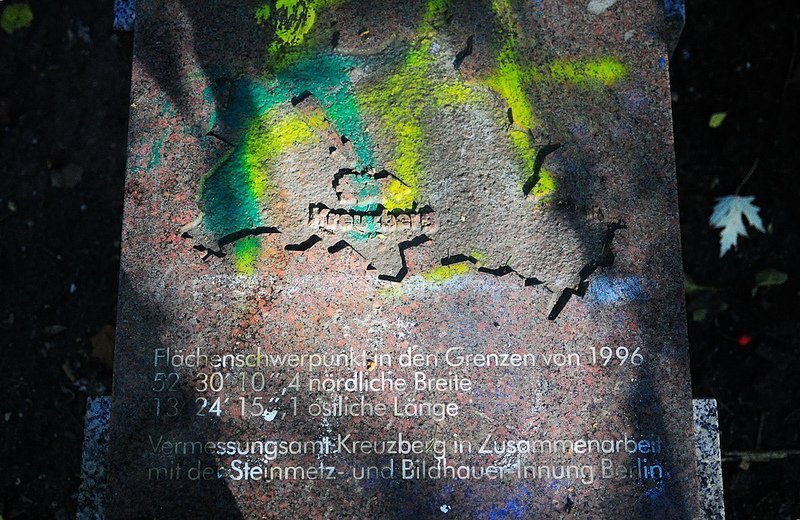 After we reached the rough location, we were somewhat stumped as all that we could find was a school, small parks and residential buildings. No Plaque, marker or sign to be found. We circled around the block hoping that it might be found on the other side of the buildings, but to no avail. By off chance we decided to cross through the cycle path next to the school and there we found it. The Center of Berlin. 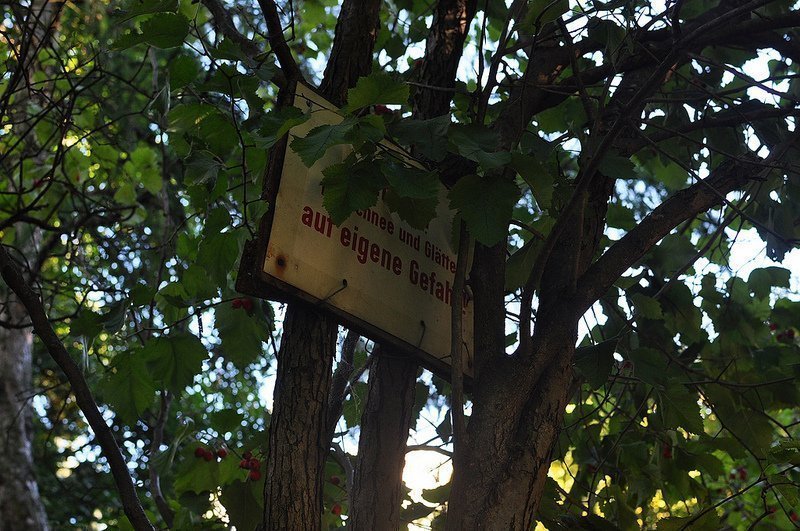 Typical of Berlin its covered in graffiti and so awkwardly placed that it’s almost hidden in a bush. An ominus sign hangs in the tree above warning of the dangers of trespassing in the winter due to snow and ice. All you can really see of the sign though are the words Gefahr – Danger – that kind of sets the tone already. Im sure the resemblance to a gravestone is totally coincidental. 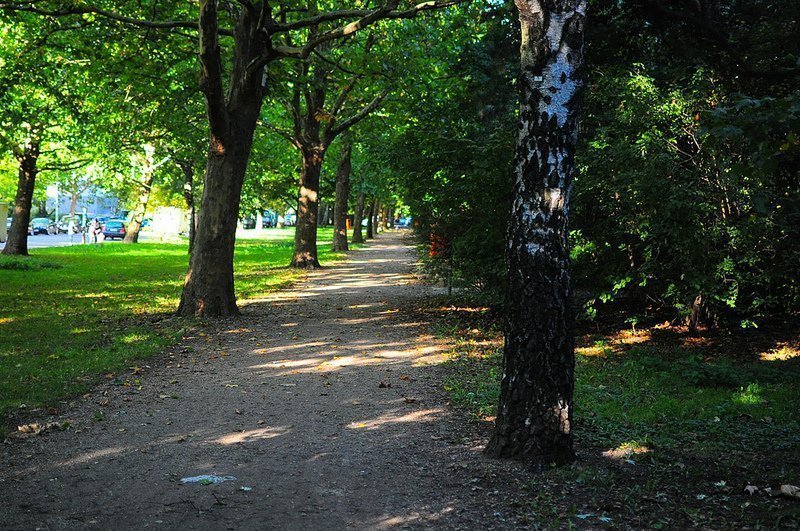 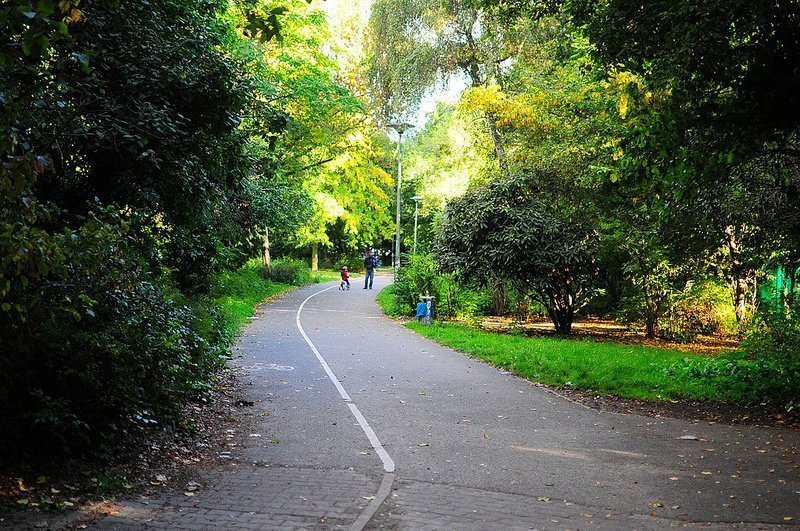 While studying the plaque, a group of youths formed around us and a verbal turf war broke out after we discussed the possibility that Kreuzberg might not be the center of Berlin. Kreuzberg 4 life was the appropriate response. 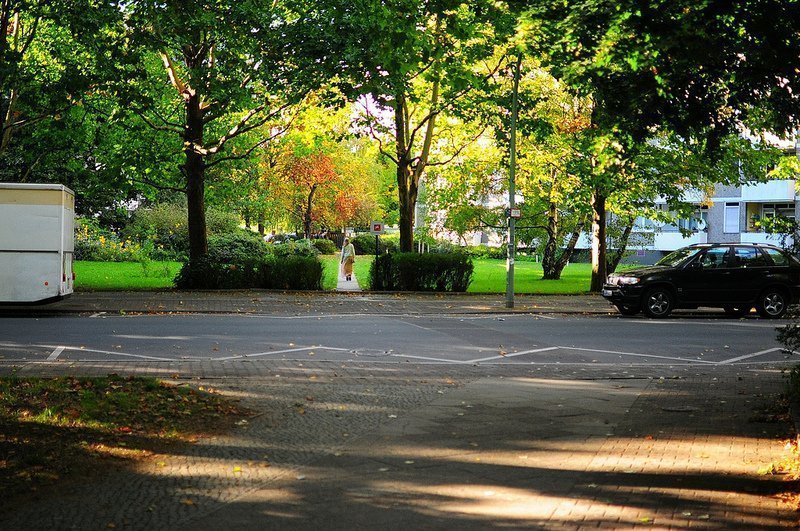 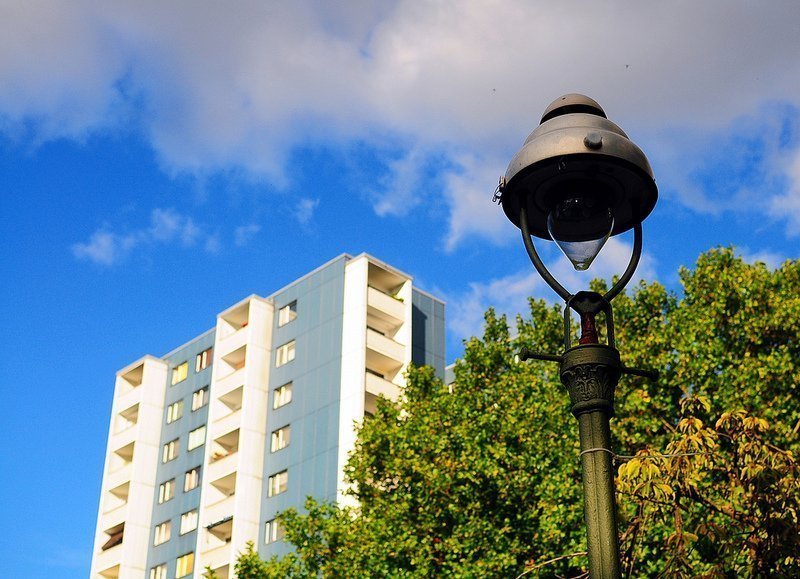 The “new” and unofficial geographical center calculated by Arnold Zenkert ist just an 8 minute bike ride into Neukölln – so wanting to be on the safe side we ventured into the hipster center of Berlin.

We werent impressed. Standing in front of the Spremberger Straße 4 – a nondescript yellowish house on a street that runs parallel to the Maybachufer – didn’t seem quite right. Plaque or no plaque, it didn’t have the same feel to it. Maybe its better that Kreuzberg retains the title. Knowing Berlin – investors would probably use it as a chance to raise the rents in the über trendy area anyway. 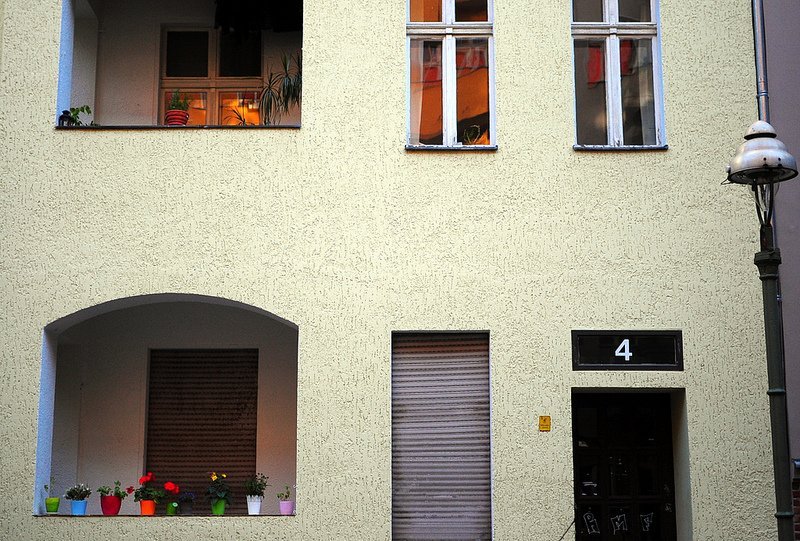 So what does the Center of Berlin look like? Well it looks like the rest of Berlin. and nothing like it at all. Women wearing headscarves. Kids with footballs. Fathers teaching their kids how to ride a bike, parks and plattenbauten.

Despite the efforts of some local politicians to immortalize kreuzbergs status as the center of Berlin and have it marked on the official maps – the city has steadily declined (read:ignored) the request. Quite possibly because the center – which shifted 6 meters in the early 90s – isn’t a fixed point anymore in the ever-growing Berlin. It seems that it has a more symbolical value, rather than a scientific one.


But they have a plaque and that’s good enough for me.

The Geographical Center of Berlin

Public Transport: Just a short walk from either the U- Bahn Station U8 Moritzplatz or U1 Prinzenstr.