The Abandoned Childrens Hospital in Weißensee Berlin or as its was officially known as: The Säuglings- und Kinderkrankenhaus Preußens (Childrens Hospital Prussia) was the first communal run childrens hospital in Prussia. The Childrens Hospital was designed by Carl James Bühring (who played a major role in the architectural development of Weißensee) and was officially  inaugurated on the 8th July, 1911. The Hospital, thanks to its modern treatment methods and the “social hygienic” standards, was soon known well beyond Berlins borders. 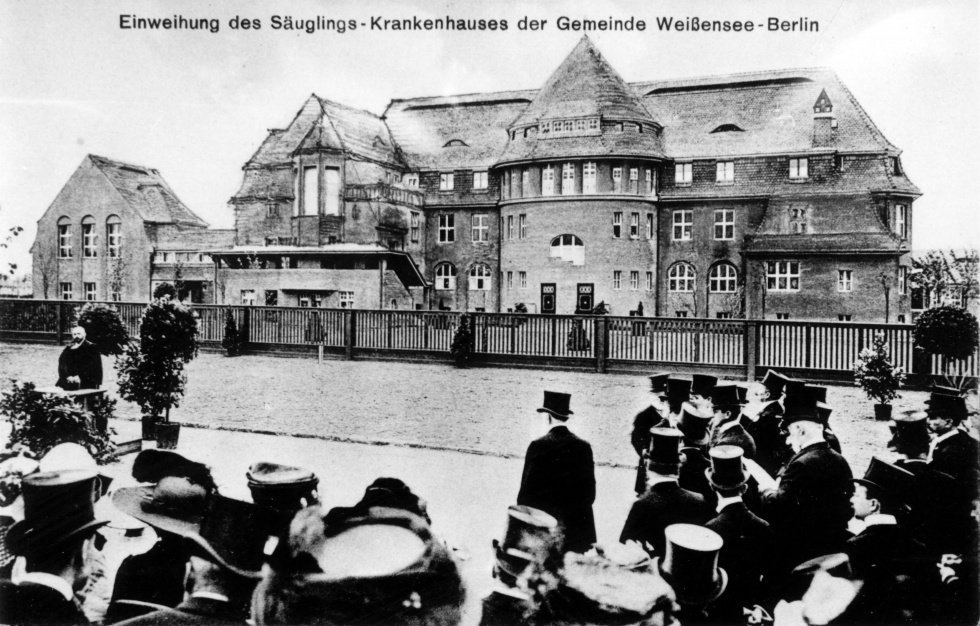 For therapeutic purposes, a landscaped park with an auditorium for trainee physicians was built next to the Clinic. A novelty at the time, a “Milchkuranstalt” was built next to the Hospital. It included a cowshed and  a food preparation institute  to ensure a direct supply of milk for the newborns and their mothers, while the excess milk was sold to the public. 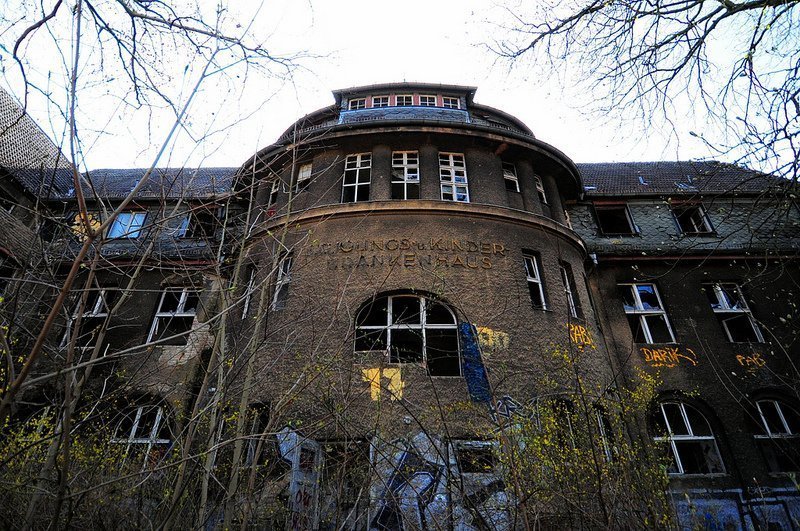 The Children’s Hospital in Weißensee continued to be in operation until the late 1980s, when they added a new building with more beds in 1987.  Ten years later, the Senate decided to close the Hospital. It has been put under “Denkmalschutz” (a protected monument) since then, but the building is in a serious state of decay. In 2005, the Russian consortium “MWZ Bio Resonanz GmbH” bought the entire Abandoned Hospital in Berlin (all 28000 sq m of it) and planned to remodel it into a cancer research center, but nothing has happened since then. The city is apparently currently looking into the legal possibilities of canceling the sales contract – but until/when that happens the building will have probably collapsed in itself. *The courts finally acted upon their threats and dispossessed the russian owner. In addition they gave him a fine of €120k and forced him to continue paying off the debts of 5 million euros. One could hope that this case could set a precedent – especially in the case of the Abandoned Ballhaus Grünau.


Sadly though, the abandoned childrens hospital has been a very frequent traget of vandalism, partially because its so easy to get in and because its easy to find. No less than 15 fires had been set in 2015 reducing the once renound hospital into a trashed ruin. This seems all to common – even less well known abandoned hospitals like the “Jungle Hospital” or the popular Heilstätte Grabowsee in Oranienburg are not free from mindless vandalism. 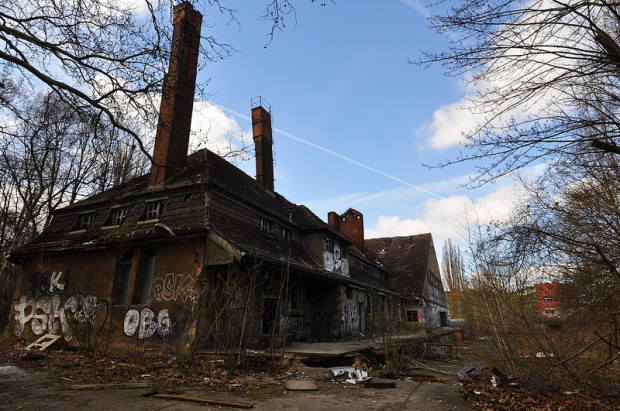 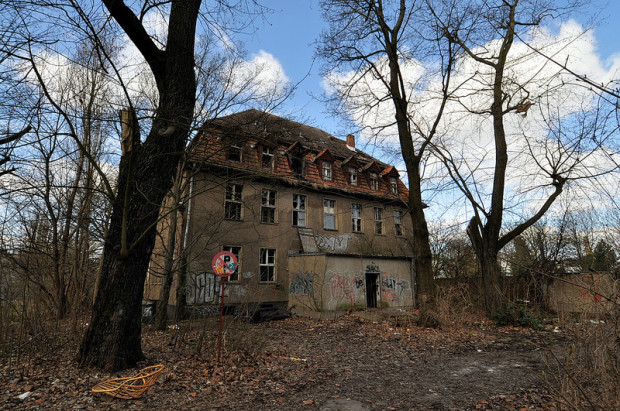 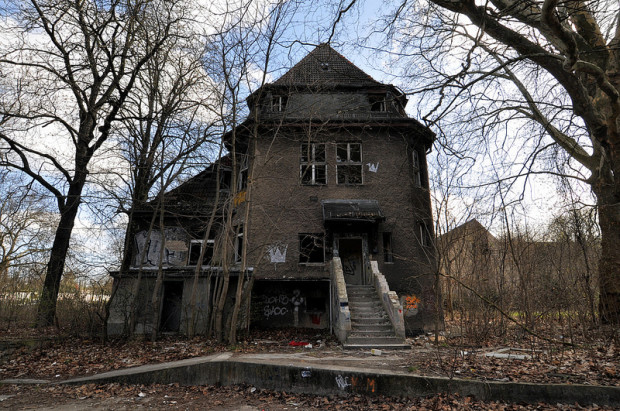 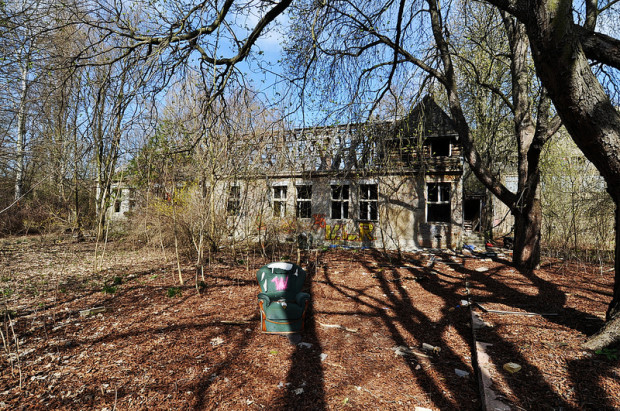 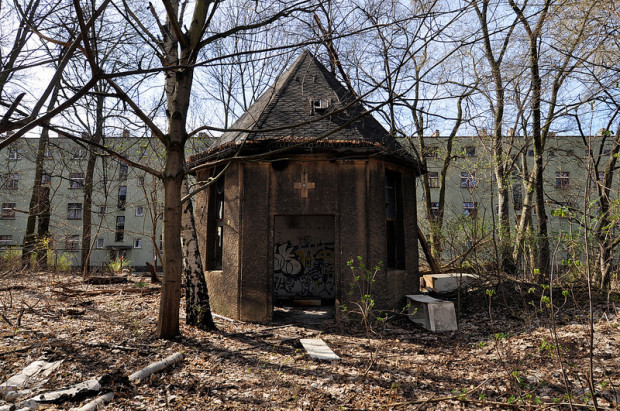 The Abandoned Childrens Hospitals proximity to a tram line and the fact that the main gate is unlocked makes entering extremely easy. I waltzed in and immediately spotted another photographer. I asked him if he had been here before or inside the buildings to which he replied “no, but they warned us that some of the floors are quite dangerous”. Now I didn’t think anything of the “us” part until I walked around the corner and spotted an older looking guy and a small woman. Again not thinking much, I had a look around and asked them if they were here as a group, and what they were doing. They suddenly realized that I didn’t belong to their “group” and gave each other some weird looks. Creeped out I made my way into the main building. Theres not terribly much to see as the building has been gutted of everything valuable. Theres tons of graffiti on the walls, but most of it can be rightfully ignored.  I walked up a flight of stairs and spotted some more photographers carrying up some props for a photo shoot. 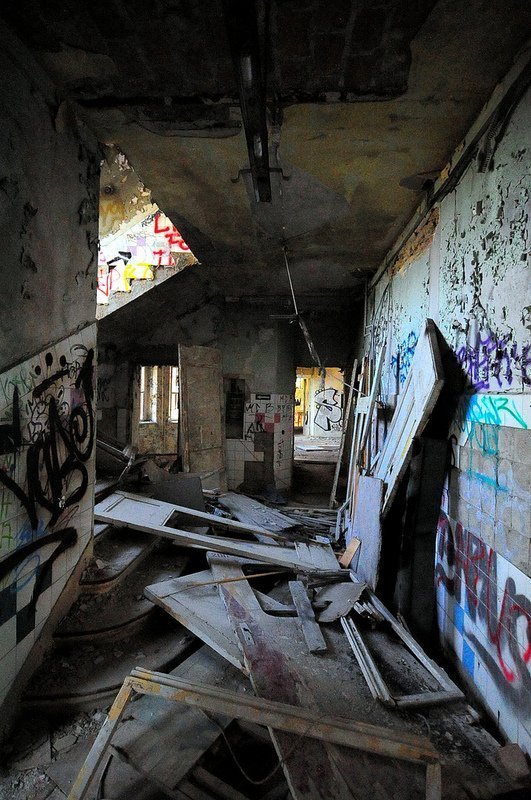 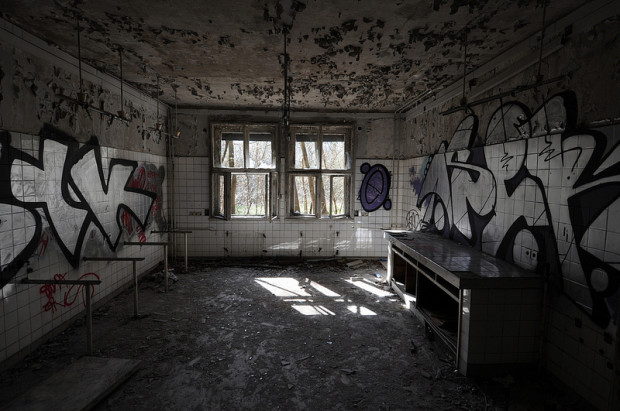 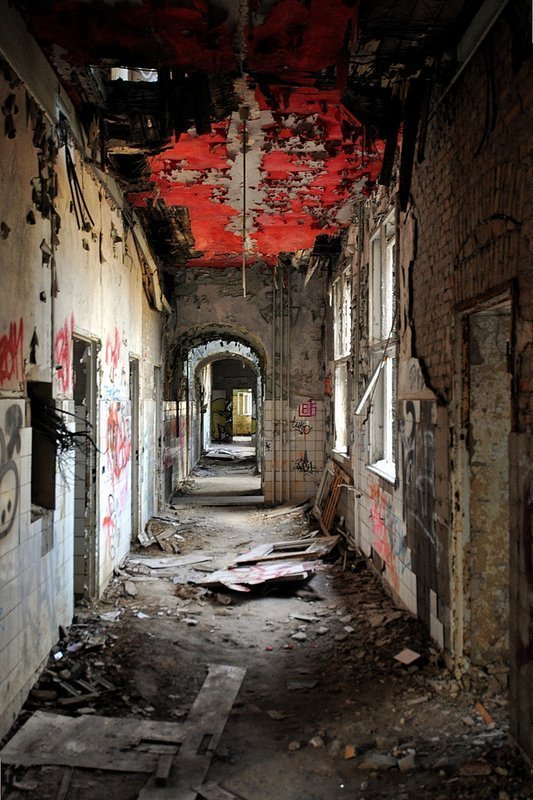 There are 5 floors, but the fact that the banisters are missing from the stairs makes the accession a rather vertigo inducing venture. Large parts of the floors on the 3rd and 4th level are rotten through – something which I only noticed after my foot crashed through a paper-thin linoleum layer. While the main hospital wing seems endless – there’s hardly anything worth seeing in the rooms. 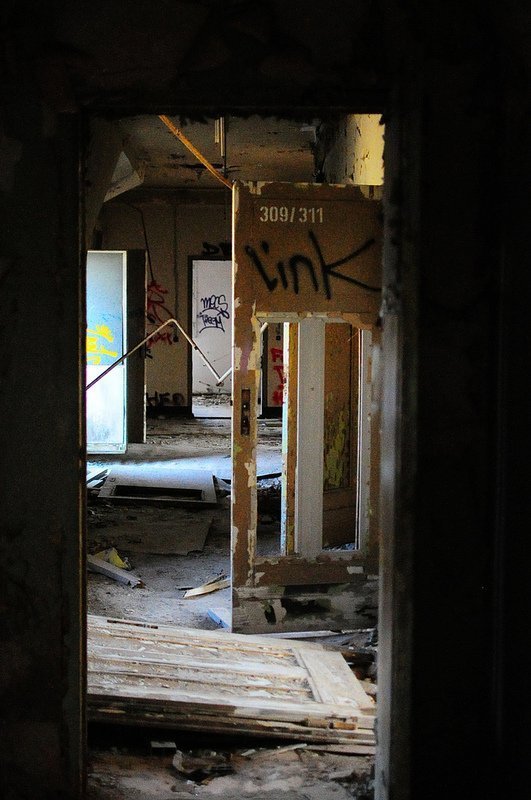 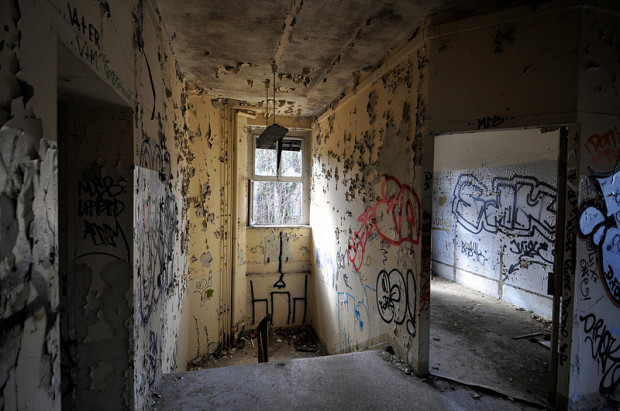 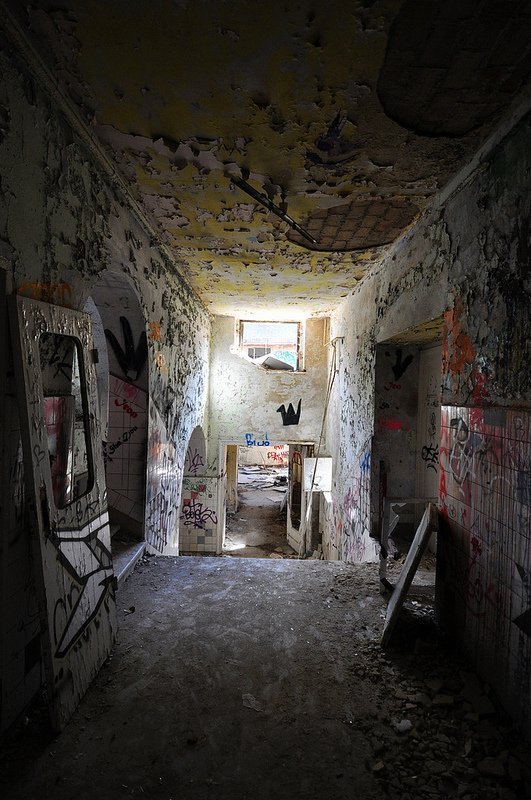 I backtracked outside to check out one of the buildings in the garden that I had spotted earlier. The roof was burnt out but the interior seemed “intact”. I noticed some larger backpacks on the floor and heard some voices so I decided to walk towards the noise. At this point I was greeted by 3 men (2 of them being the ones I had met earlier) taking pictures of their female companion  in a slight state of undress. Momentarily distracted by the sight of her boobs I made a hasty retreat.  It was at this point that I understood their sheepish grins and the “us” remark. Seems like some photographers decided to meet up and take some “erotic” urban pictures. 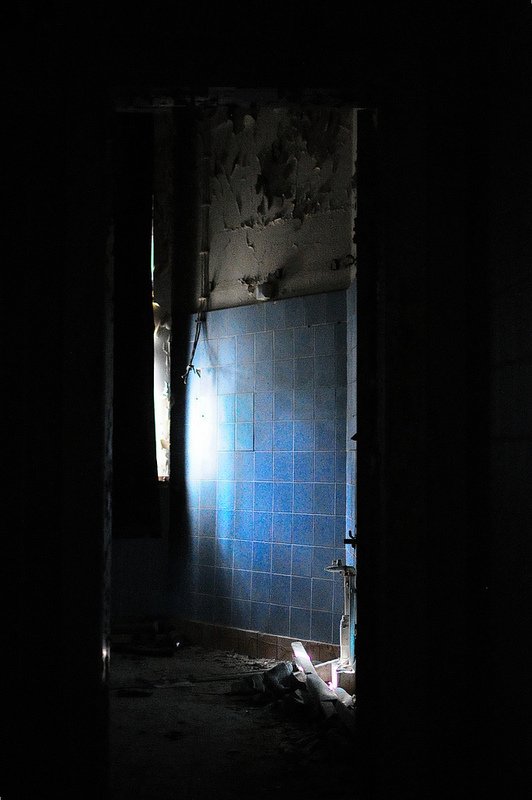 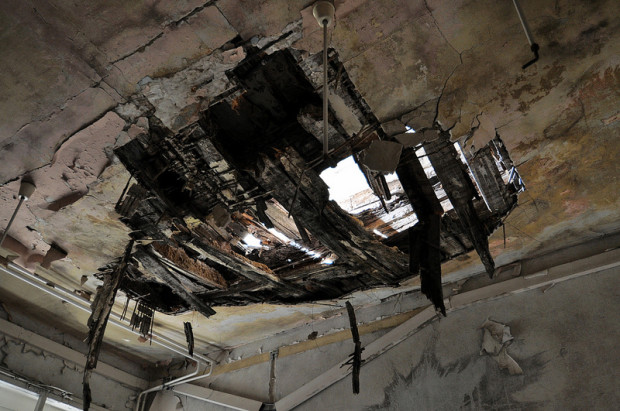 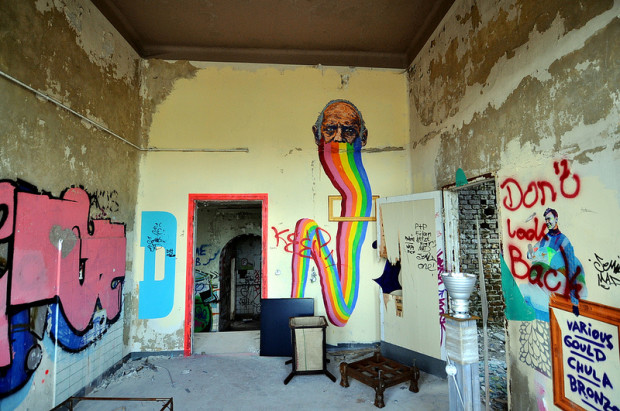 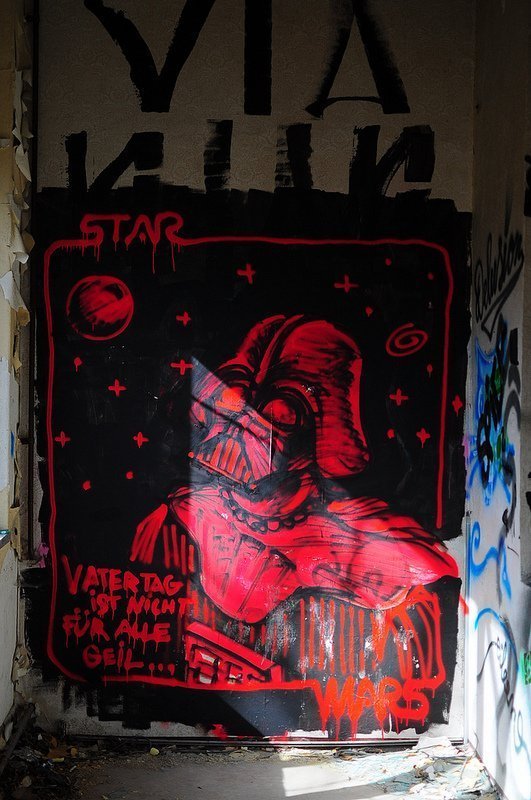 I took a wide swing around the building leaving the happy group to their business and walked towards the newer wing built in 1987. It was here that I caught a glimpse of the back-end of the main childrens hospital building. I noticed a balcony and found it strange that I hadn’t seen it before. I zoomed it in with my camera when I noticed another small group, with an equally scantily clad lady. It seems like I had picked the right day to explore the hospital. 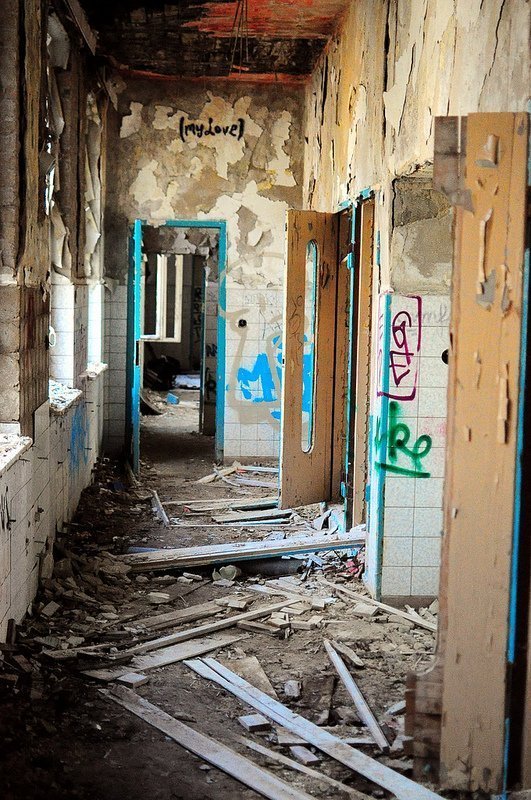 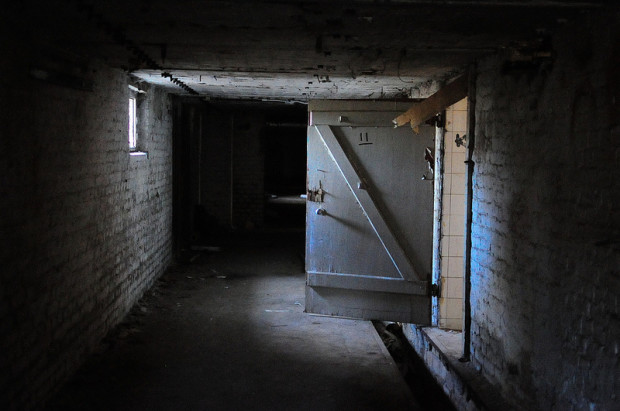 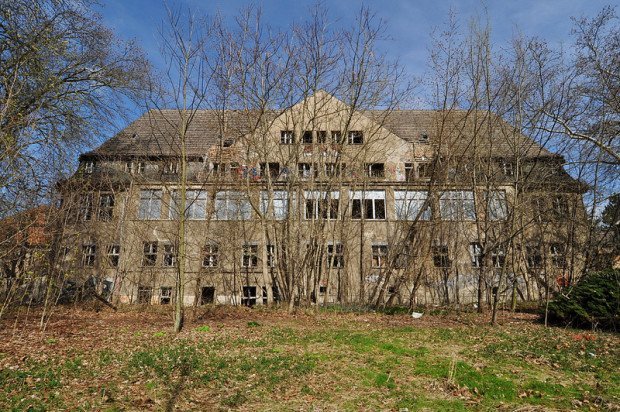 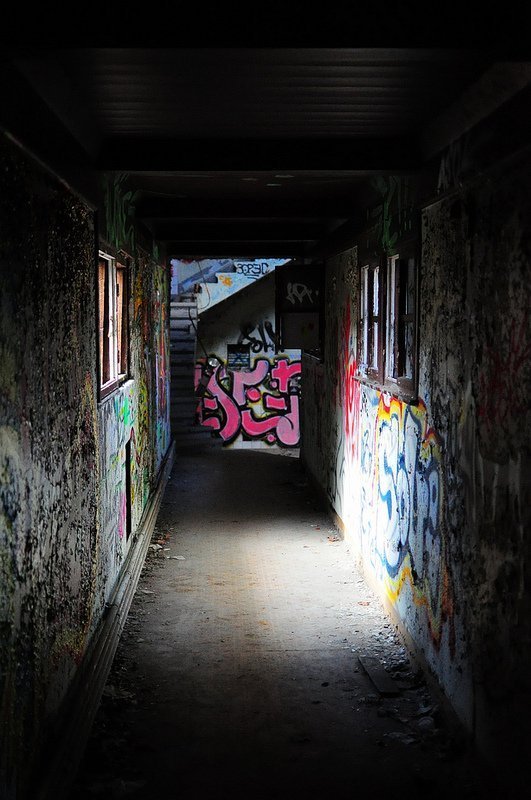 While its difficult to tell that the main abandoned building used to be a Childrens hospital, the new wing is clearly still recognizable as such. The individual rooms still give off the uncomfortable hospital atmosphere, and the directions to the head nurses office are still visible on the wall. All the windows are smashed, even the thick dividing glass. Graffiti is smeared on the walls and fake blood is strewn across the floor. 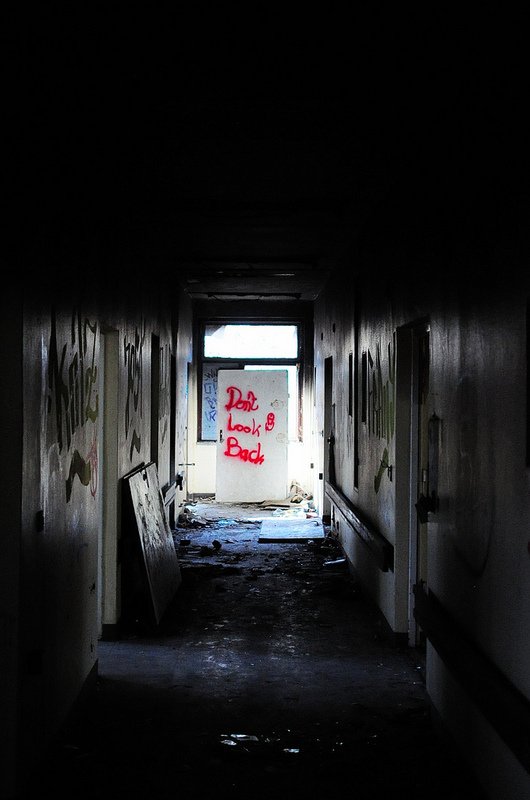 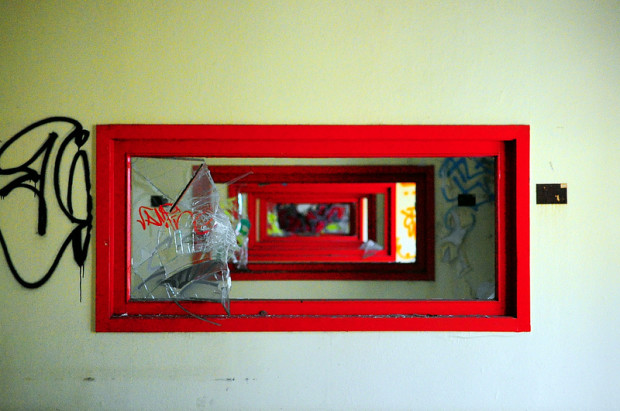 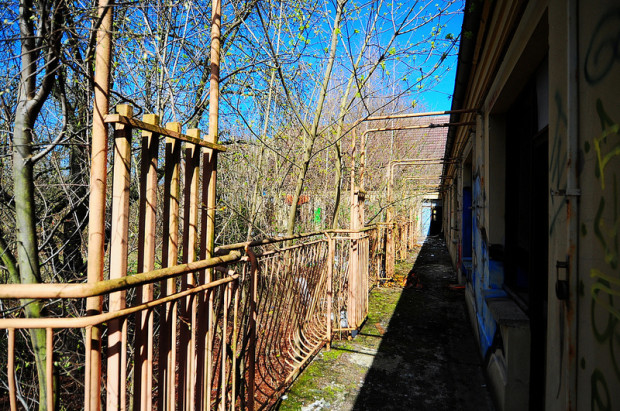 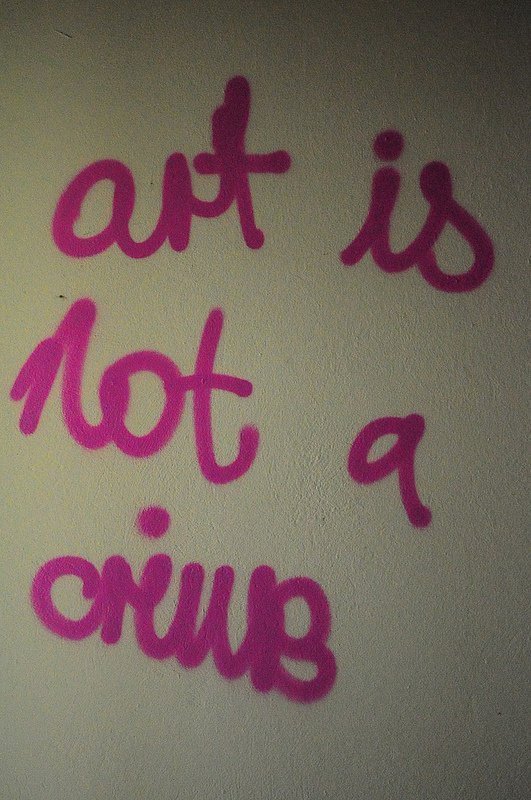 Theres a passageway which connects the new wing with the main building which I had missed earlier, so I walked down the trashed hallway and walked through one of the broken doors. It was here where I was greeted by  lady nr 3. But this one was fully naked. At this point I decided that it was probably time to slowly leave.  On the way out  I had a quick look into the small residential building at the main entrance. It was just as unspectacular as most of the other buildings – with the exception that the higher you got, the worse the smell became. It seemed like someone definitely lived up there so I chose not to pry any further. 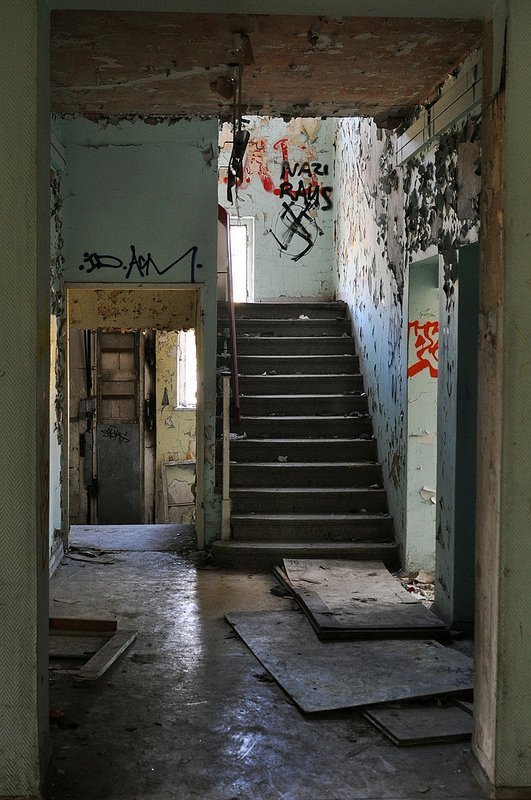 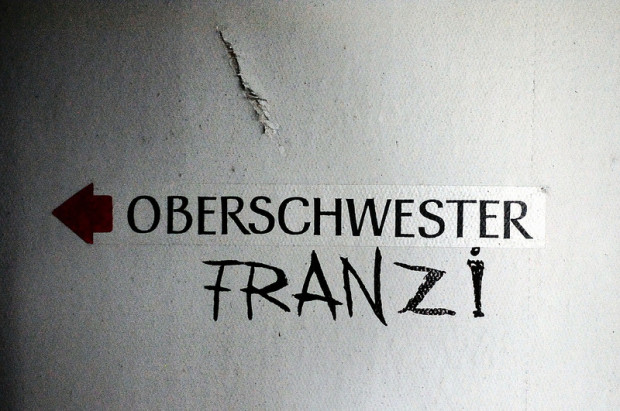 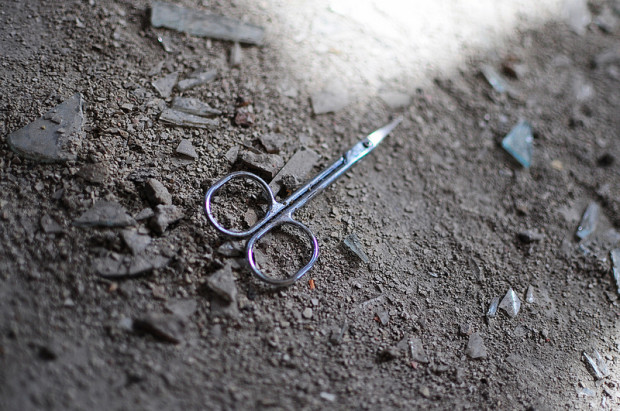 For those who want to start urban exploring, the Abandoned Childrens Hospital in Berlin aka the Säuglings- und Kinderkrankenhaus Weißensee might be your best starting point. It’s easy to get there, easy to get in, and relatively harmless if you watch out for the rotten floors. If you dont – youll crash through the floor/ceiling like this careless american tourist. As mentioned above – the Hospital has been repeatdely torched, destroyed and trashed. The condition its in is terrible. Nevertheless – low risk, low frills. Theres not  much to see aside from the usual empty rooms, crumbling ceilings and graffiti but you might as well check it out while it’s still there. Just dont expect too much.


For more photos of the Childrens Hospital check out the Flickr Album: Säuglings- und Kinderkrankenhaus Weißensee

The Abandoned Childrens Hospital in Berlin