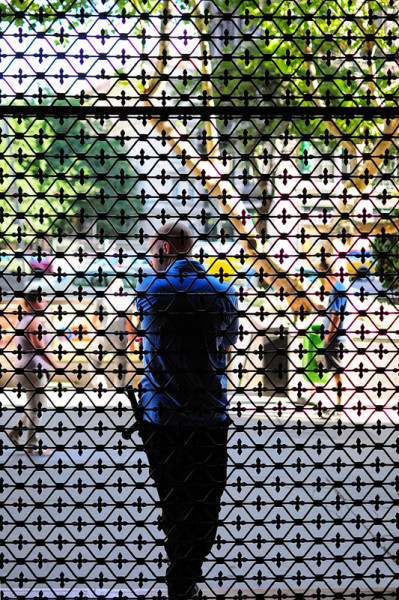 It’s no secret that I am a huge Hungary Fan. Every year I visit Budapest at least once – which might be because  my lovely partner is Hungarian – or just down to the fact that the Summer in Budapest is just so much better than in Berlin. It might sound like sacrilege, but for the last 3 years the summer in Berlin has been a real let down, an increasing urban myth which gets passed down from transplant to transplant. While Berlin is my home, Budapest is everything that Berlin has stopped being. Its dirtier. Its got more communist tat (and more Trabbis believe it or not), it’s on an equal level in terms of nightlife (for some reason I never go out and party in Berlin, but I do in Budapest) and it’s not a tourist swamp (for the most part). While there are a plethora of reasons why Berlin is still the better City (after all, we still live here and not there), Budapest has a host of amazing secrets on offer – such as the Párizsi Udvar – a derelict Art Deco Shopping Center.

The main entrance of the Párizsi Udvar is  located on Ferenciek tere, one of the oldest squares in Budapest. In 1817 – at a time when this area was one of the most popular in the city – the József brothers decided to set up their business there. The building which they commissioned was named Brudern-ház (Brother house) and was designed by the Hungarian architect Mihály Pollack.

Inside the Budern-ház lies a glass-roofed shopping passage which was modeled after the “Passage des Panoramas” in Paris – hence earning it the nickname Párizsi-haz (Paris House).

In 1907, the Belváros-bank acquired the property and organized a tender for the construction of its new, prestigious company headquarters.  They received 43 submissions and a design by Flóris Korb and Kálmán Griegl was chosen as the winner. The bank’s board of directors however decided to select a different architect, the German-born (in Hamburg) Henrik Schmahl.

Construction began in 1909, and a year after Schmahls death, the building was completed in 1913. A hidden elevator was constructed as well in 1911, but it was only unveiled/opened at the end of construction in 1913. The new building, again called Budern-ház was designed with a mixed use in mind, with a lavish shopping mall on the lower two floors and office space on the upper floors.  The arcade was named Párizsi Udvar (Parisian Court) in reference to the original shopping passage.

The arcade has a vaulted roof made of colored glass and a striking hexagonal glass dome, designed by Miksa Róth. The arcade is decorated with cast-iron and sculpted wooden ornaments (though these are hard to spot in the darkness) The floors have beautiful mosaic tiles, the balconies and windows are decorated with bar tracery, pediments and sculptures. If you can spot them – there are several reliefs of bees, symbolizing thrift, a reference to the bank that commissioned the construction.

The Building survived the second world war relatively undamaged – but in a fate resembling many historic buildings in Germany – the communist regime had other plans for it. The Building was nationalized, “renovated”, and converted into apartments. In the process almost all of its splendor was either covered up and/or destroyed. Some Shops  did move  back into the building in the mid 1950s. The Building was renovated again in the 1970s and 80s, but this was done in such a poor fashion that more was actually destroyed than renovated.  The Párisi Udvar had become a dark lonely passage, and all the shops slowly moved out.  The building was sold off in 2010 to the SCD Group, but the ongoing financial crisis put a stop to that plan. As of now – the building stands empty guarded by a lonely security man.

The Párizsi Udvar is relatively easy to reach – as its right across from the Ferenciek tere M3 Metro Station and Several Bus Stops.

If you’re ever in the neighbourhood – which you will be as the Basilica is only 3 Metro Stops away – pop in and have a look at the art deco splendor for which Budapest is so famous for. Despite having lost some of its former glory, there is still more than enough to amaze you.

Pro Tip: Head over to the Vaci Utca street (literary 100 meters down the road) and grab a Kürtöskalács. This unpronounceable word is a spiral of caramelized cake dough, probably the best and most authentic Hungarian thing you will eat when you are in Budapest.