Updated Information: The Lotz Terem | Alexandra Bookcafe unexpectedly closed its doors in 2017, and in the beginning no one was really sure why. It turns out that the Alexandra Group which ran the building, had some financial difficulties and closed multiple shops across the country.

So a lot of people have asked: Is the Alexandra Bookcafe in Budapest closed? Is it open?

The Book store and the Alexandra Bookcafe remained closed until 2018, when plans were announced to reopen the building. As of July 2018, the building has reopenend as is now known as the Andrássy Élményközpont – Andrássy Entertainment Center. The building now hosts a digital / future experience exhibition, and the cafe is accessible again. With the Lotz Terem being rebranded Andrássy Élményközpont, the Book Cafe in Budapest has also undergone a name change and is now called Café Párisi. The “heavy furniture has been swaped out and replaced with a more “delicate” decore. Ive seen some recent images and I must say its lost a lot of its previous charm.

While its great that the Café Párisi in Budapest is now open again to the public, its received terrible reviews from the locals as the quality of the food has dropped considerably.

I short: Yes, the Alexandra Book Cafe in Budapest is open again – its just rebranded to Café Párisi after the original company went bankrupt. The decors changed, and the food quality has dropped but its still a beautiful cafe to visit. Ive left the original article up with the old pictures until I get a chance to revisit it.

I make no secret for my love of Eastern Europe. The people, the atmosphere and the lifestyle – they all emanate a sense of adventure and excitement. Budapest of all places (technically central Europe) holds a special place in my heart, and dangerously rivals my love for Berlin. Ever since I moved back to Germany, I have visited the so-called Paris of the East multiples times every year for the past 5 years. Of course it’s no real surprise that my lovely partner is a Budapest Native, so ive got plenty of reasons to keep on visiting the city which has become our second home.

So even though we can safely say that we know the city inside out, it turned out that neither of us had ever been to the Párizsi Nagy Áruház (Paris Department Store) – commonly known today as the Alexandra Bookcafe.

The Alexandra Bookcafe started off its life on the Andrássy út – Budapests luxurious shopping street – as a Casino in 1884. Planned and designed by Gustav Petschacher and Sigismund Sziklai, the three-story Neo-Renaissance building – had a billiard and ballrooms on the first floor, playing and reading rooms on the second floor, while the third floor was constructed as 2 luxury apartments. The interior design – including the spectacular art deco fresco’s which have survived to this day, were done by  the “Prince of Hungarian Arts” Karl Lotz.

The buildings first transformation took place in 1909 when the new owner, Samuel Goldberger renovated the building which had been damaged by a fire in 1903. The new building opened on the 3rd of March 1911 under the name Párizsi Nagy Áruház (Paris Department Store). The Párizsi Nagy Áruház was actually Hungary’s first modern department store, and thanks to its stunning architecture – an open plan atrium, a high glass vaulted ceiling, and a glass-mirrored elevator – it was soon known as one of the most beautiful buildings in the capital’s most beautiful avenue. The Paris Department Store also has the neat little feature of having walkable terrace roof, which must have boasted a spectacular view back in its day.

The building survived the war undamaged, but as with the Pariszi Udvar – it was nationalized and more or less run down. The Párizsi Nagy Áruház was renamed into Divatcsarnok – Fashion Hall, and reopened to the public in 1958, and received a protected monument status in 1967. 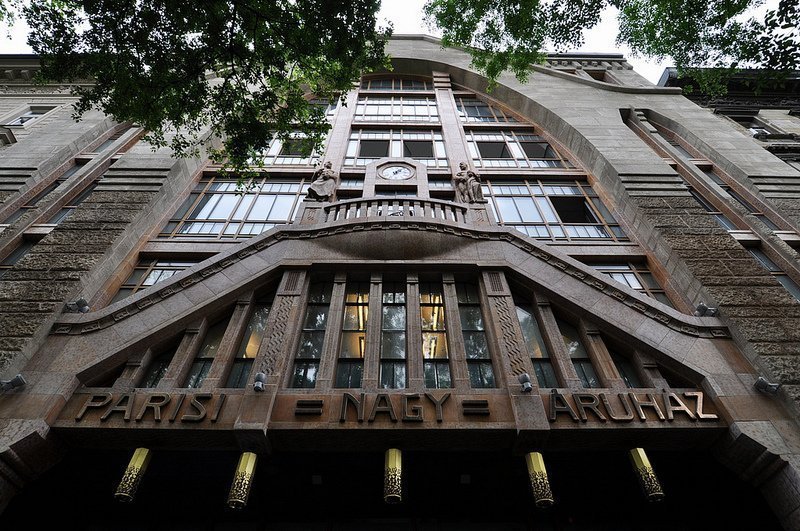 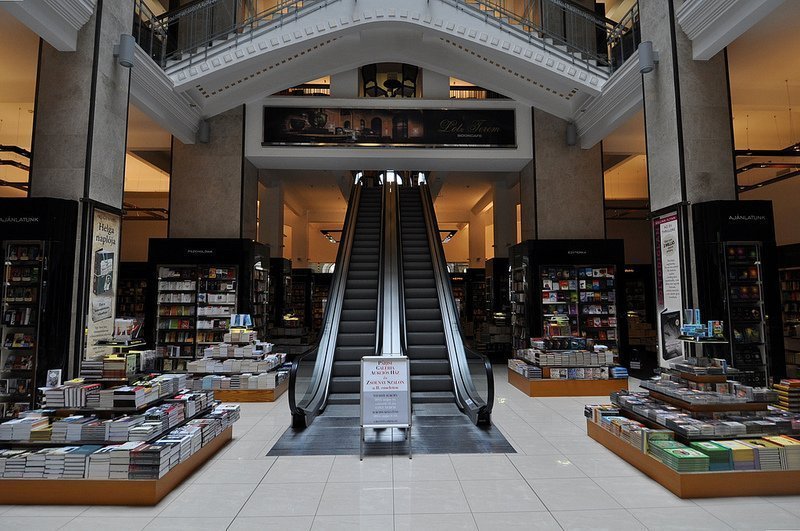 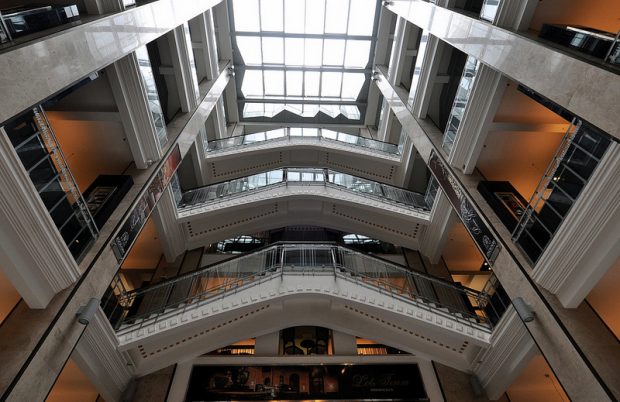 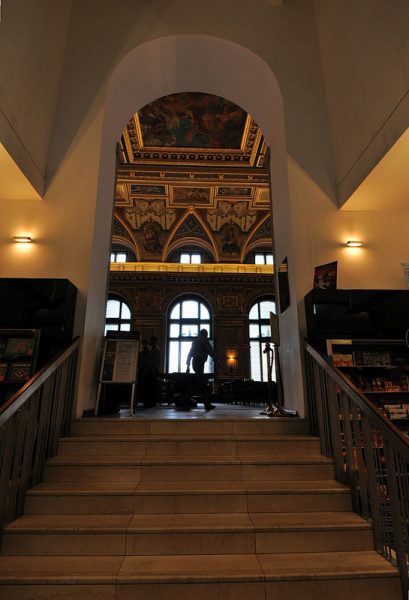 After being snapped up by a larger department chain after the collapse of the soviet union and the opening of the iron curtain, the Fashion Hall shutdown. Subsequently the building fell back into the hands of the state in 2001, which failed to realize any concrete plans for it. A discount supermarket moved in, but failed so quickly that hardly anyone remembers them ever being there. The Orco Property Group (a french real estate group) bought the building in 2005 and spent the next 4 years renovating the building. When the building reopened on the 10th of November 2010, the first tenant was the Alexandra Bookstore, which took over the ground and first floor, as well as the Lotz Hall – Lotz Terem (more to that in a moment). There is an antiques dealer/art gallery on one of the upper floors, while the rest of the building is planned to be let out as office space. 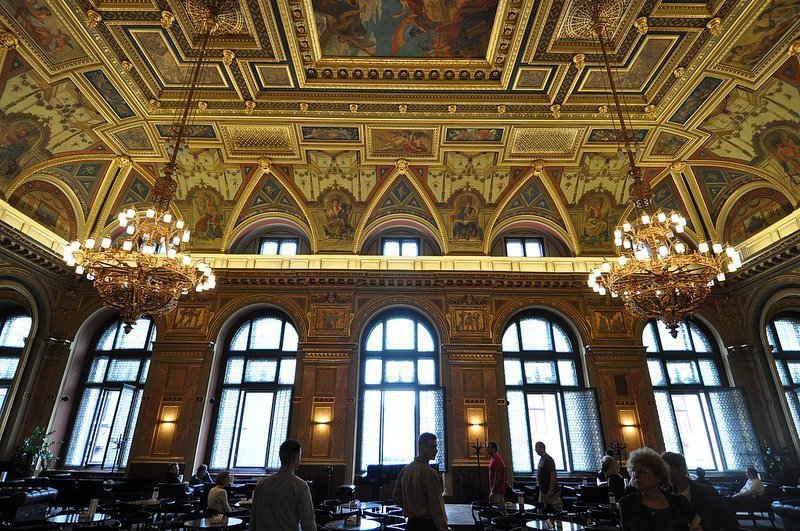 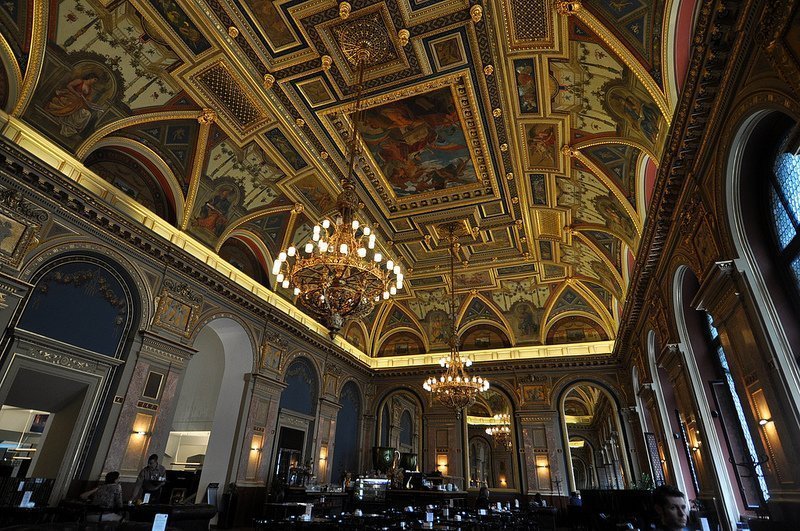 Now while the exterior of the building has a charming art deco style facade, its nothing too out of the ordinary in Budapest Terms. You would walk right past it without ever asking yourself what the building used to be. Its whats hidden inside the building what makes it so remarkable. After entering the Alexandra Bookstore on the ground floor you’ll find a pair of escalators which bring you up to the first floor, and usher you directly in front of the Lotz Hall (Lotz-Terem) – a fantastically ornate Neo-Renaissance ballroom turned cafe. At first glance all you see is gold. It’s so bright that it forces you to stop for a moment just to soak in all the impressions. It’s this Gem that makes the Párizsi Nagy Áruház so special. 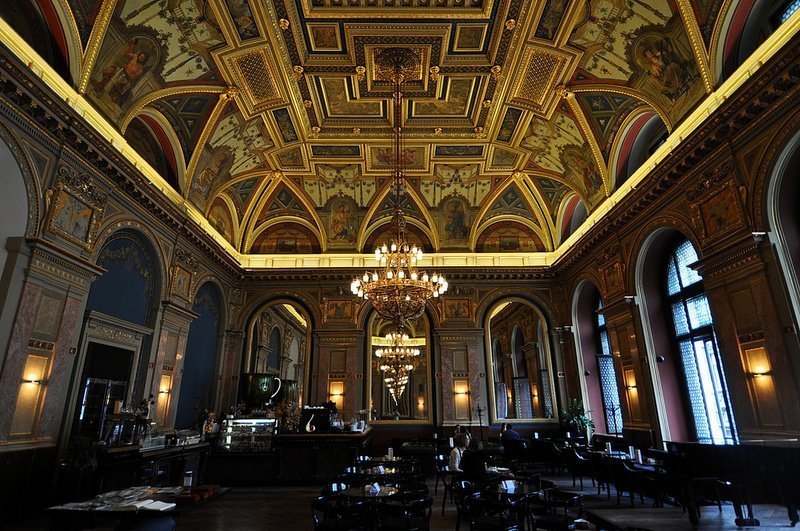 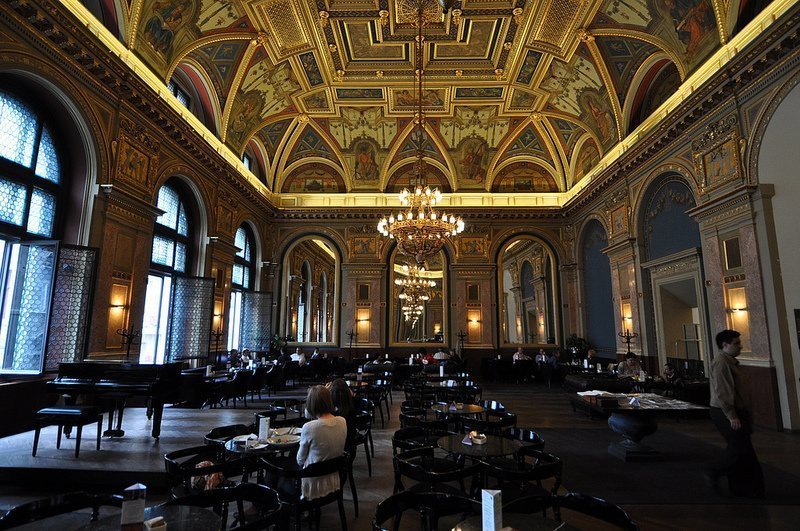 The Lotz Hall (Lotz-Terem) was named after Karl Lotz who painted the murals inside the Alexandra Bookcafe, as well as those of the Budapest Opera, Hungarian Parliament, Hungarian National Museum, St. Stephens Basilica, the ceiling fresco in the Buda Castle and many many more. This man was a master of his craft, and the Hungarians loved him for it. While the rest of the building has been more or less whitewashed, the Lotz Hall has been faithfully restored and brought back to its former glory. 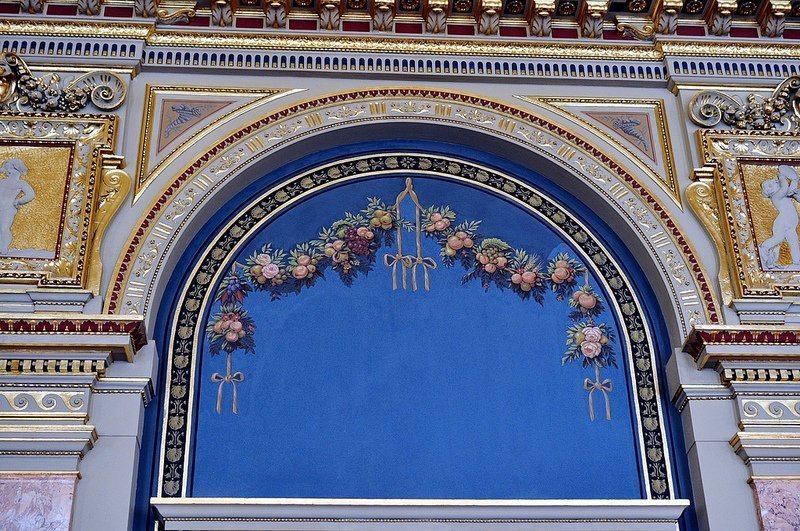 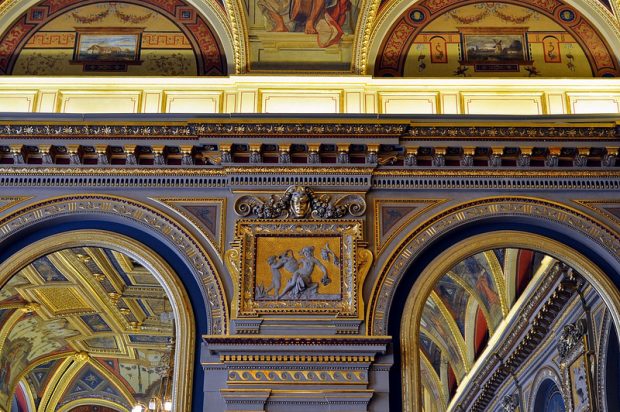 It’s hard to understate the majestic beauty of this cafe – it’s simply stunning – and dare I say, having it  turned into a bookstore cafe is probably the single best thing they could have done with it.  Thanks to the presence of the cafe, you can sit and marvel at its splendor for hours while relaxing in an opulent leather chair and having a drink. 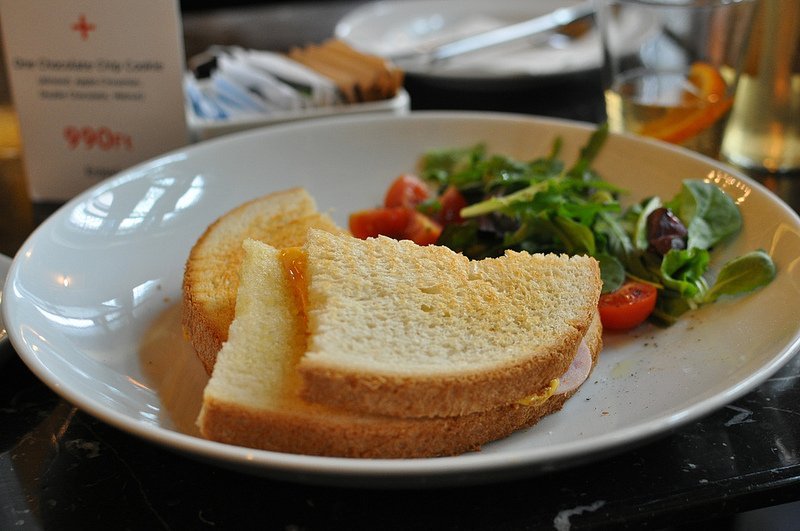 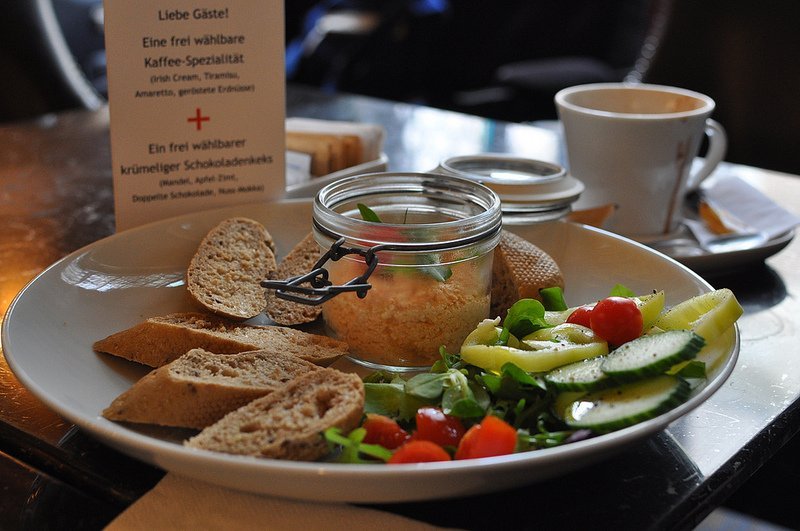 Interestingly enough, when we sat down for a coffee and some food, we assumed that due to its location it would be super pricey. Quite the opposite! It’s actually cheaper than most cafes you’ll find around the Andrássy út (at least it was at the time when I wrote this) – even more reason to come by and relax from the hustle and bustle outside. 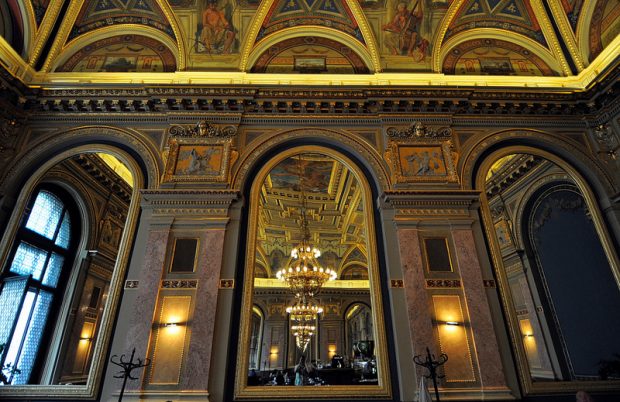 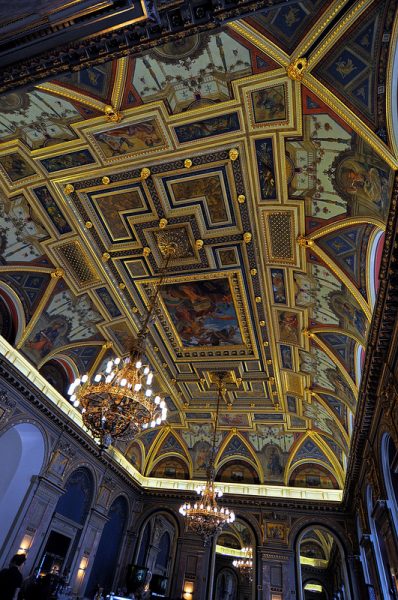 While you sit in the Bookcafe, it’s here that you begin to wonder what Budapest must have looked like when the whole city was this decorated this ornately. 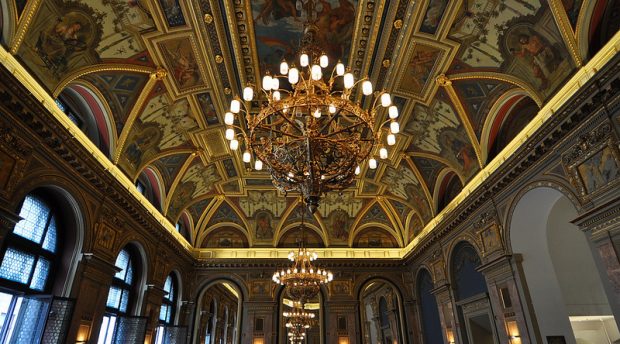 I must say, the Alexandra Bookcafe is one of my new favorite spots in Budapest. Youll be hard-pressed to find a more beautiful cafe in Europe.

For more photos of this spectacular cafe – check out the Flickr Album: Alexandra Bookcafe -Lotz Terem

Public Transport: The Bookstore/Cafe is between the Metro Line M1 Stations Opera and Oktagon.