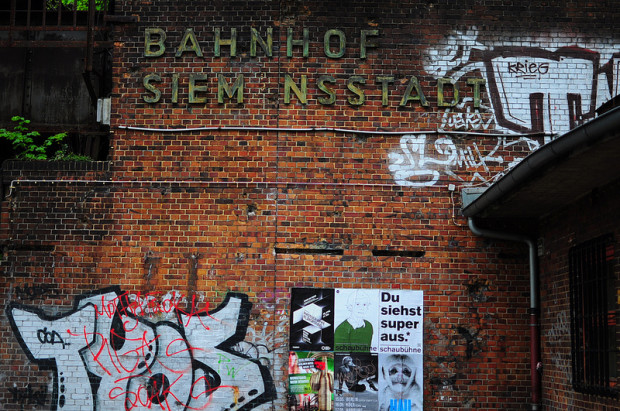 Berlin has its fair share of Geisterbahnhöfe – Ghost Stations. Some are hidden underground, behind brick walls, or in overgrown forests  while others are hiding in plain sight. The Second World War scuttled many U and S-Bahn projects, and the Cold War with the division of Berlin turned many stations into official demarcations lines. But other geisterbahnhöfe came into being through a less turbulent fate of events – such as the S-Bahnhof Siemensstadt. It was shut down simply because it wasn’t used enough.

Berlin used to be the largest Industrial city in Europe – hard to believe when one looks at it today. One of the many companies with their headquarters in Berlin was Siemens. In the early 19th Century the Company grew so quickly and so large that it became a city in its own rights called Siemensstadt. 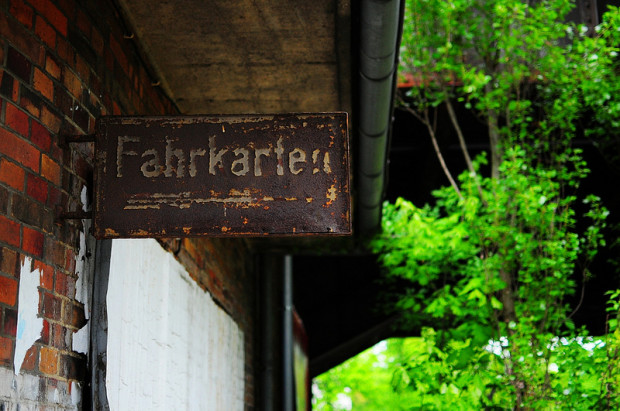 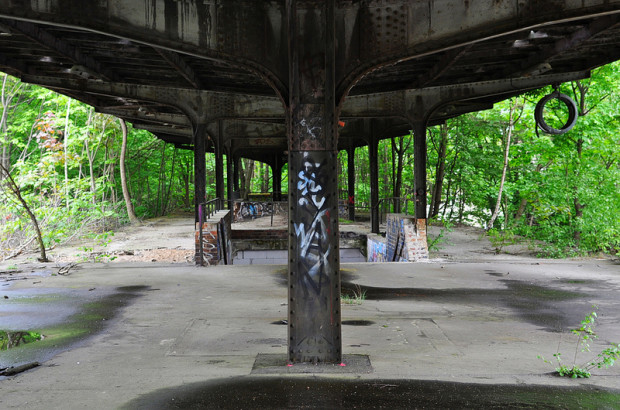 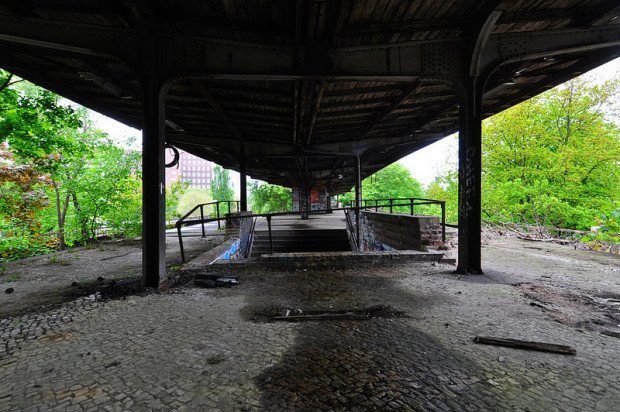 In 1905 the Siemens Company  built a Train Station for its employes so they could quickly get to work. At first the newly opened “Fürstenbrunn” station proved rather popular but it was still too far away from the main factories. Siemens decided to move its main production plants further north in Siemensstadt, forcing them to come up with a much-needed alternative. In 1925 Siemens and the Deutsche Reichsbahn-Gesellschaft agreed on a new dedicated S-Bahn line directly connecting the Factory Plants and the Workers housing.  The Line originally ran from Gartenfeld to Jungfernheide, and in the first few years often ran all the way down to Neukölln and Papestraße (now Südkreuz).

The deal between Siemens and the Reichsbahn was rather interesting as Siemens would provide the land, the railway lines and the stations, while the Deutsche Reichsbahn would take over the operation. The reason this agreement transpired so smoothly was most likely down to the fact that Carl Friedrich von Siemens (the big boss of Siemens) was also President of the Board of the Deutsche Reichsbahn-Gesellschaft. What a lucky coincidence! 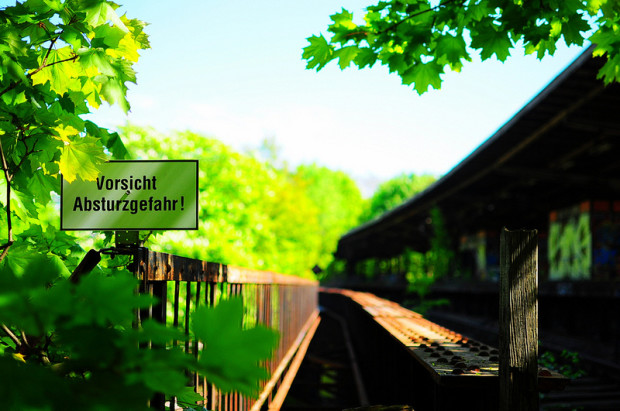 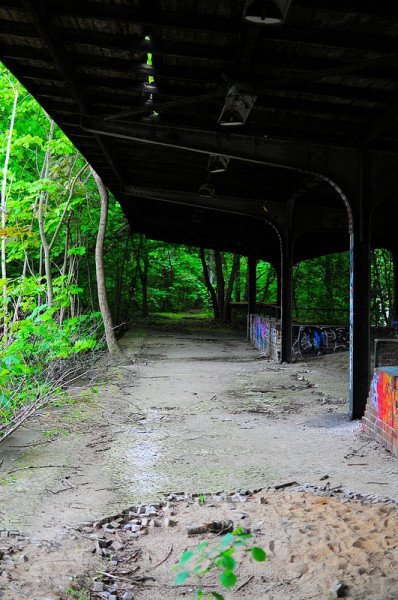 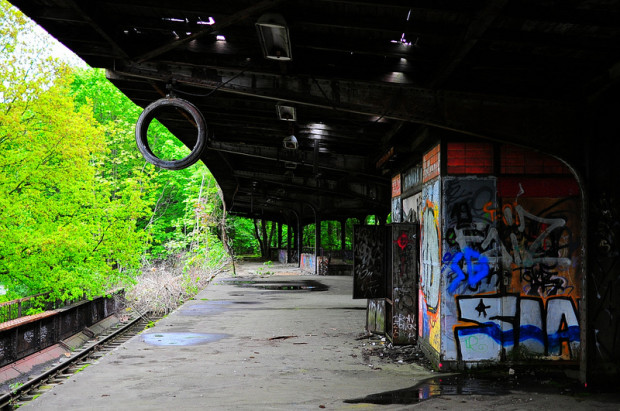 Construction began in 1927 and was completed two years later. The line started operating on the 18 December 1929 and thanks to the “great electrification of Berlin” ran entirely on electricity in an interval of 5 minutes. Of the approximately 90,000 workers that Siemens employed in the Siemensstadt alone, an estimated 17,000 traveled to and from their workplace with the Siemens S-Bahn.

As with everywhere else, the line suffered heavy damage during the Second World War. Albert Speer had planned to extend the line, but the extensive damage scuttled those plans. Large parts of the tracks were dismantled by the Soviets and shipped back to Russia (dismantling heavy and any other useful industry and shipping the back home along with a conscripted labor force was a common practice by the allies) and the Spreebrücke (the bridge crossing the spree river) was destroyed. A temporary bridge was set up on the 17 September 1945 and normal S-Bahn service resumed by the 3 December 1956 (after the bridge was fully restored). 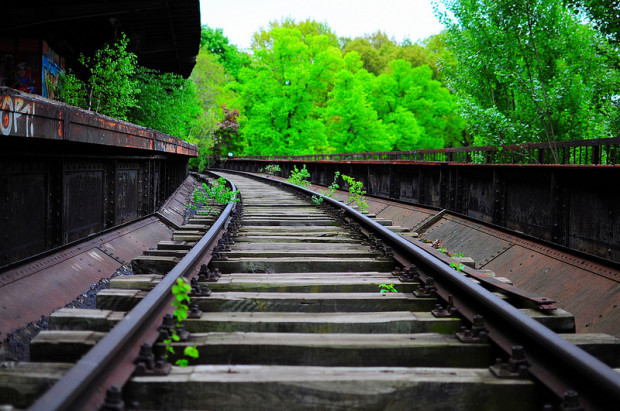 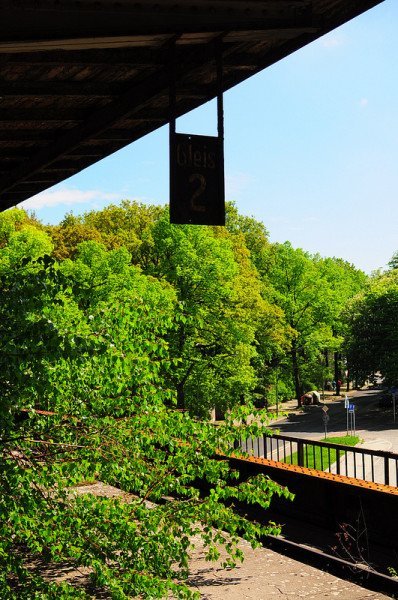 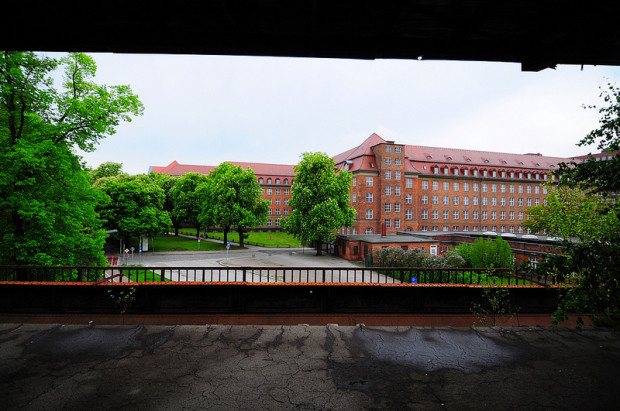 Siemens, realizing that Berlin was no longer the best place to run a company, moved its headquarters to Munich. This set the tone for the future of the S-Bahn line. Less and less people used the line, which in turn prompted the Bahn to roll out its older trains. Soon enough the Siemensbahn was the least used network in all of Berlin. Towards the end, the trains only ran a 20 minute cycle, with an average of 30 commuters using the service.

After the Reichsbahnerstreik in September 1980 (where the majority of the GDR S-Bahn Staff went on strike and were forced back to work by the soviet army) over 72 Kilometers of the S-Bahn Network closed down (about half of West Berlins network was closed down). Of the 10 S-Bahn lines that were shut down, 3 reopened on the 28. September 1980, another 3 lines reopened after the fall of the Berlin Wall – and the other 4 lines remained closed forever. 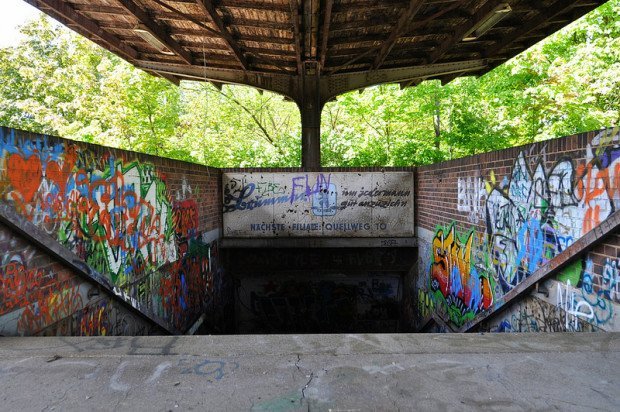 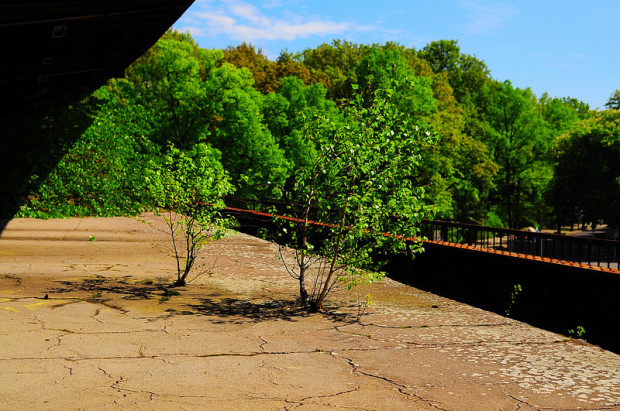 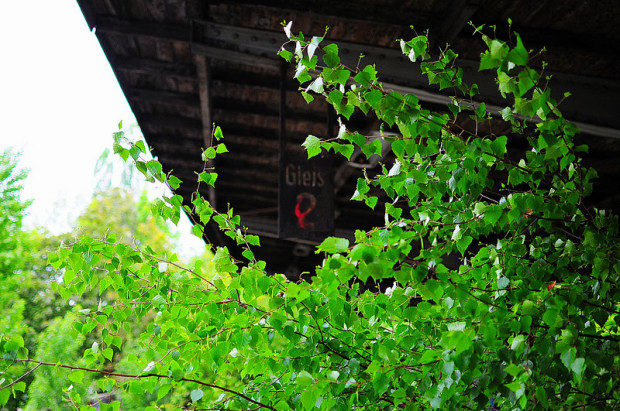 With its limited use, and the fact that the newly opened U7 Underground now connected Siemensstadt with the rest of the city – the authorities saw no practical use for the reopening of the Siemenssbahn, sealing its fate for good. Large parts of the track infrastructure have been dismantled and scrapped over the years, but the Station buildings have survived. As always, the city put the original track section of the Siemensbahn under “Denkmalschutz” (a historic monument with special “protection)  but that’s more of a symbolic gesture than anything else.

The S-Bahnhof Siemensstadt towers over the underlying rohrdamm street. To the unsuspecting passerby, the abandoned sbahn station appears to be just another railway overpass. Its only at second glance that you begin to notice the oddities: the broken lettering, the rusting ticket sign, the bricked up entrances (hold on, this description fits  most Sbahn stations!). Clearly this is more than just a neglected station.

The main staircases up to the platform have been bricked up – but the savvy explorer will find at least a dozen ways up (pro tip: you don’t need to walk all the way down the line to get up, there’s a much easier way right by the main platform). 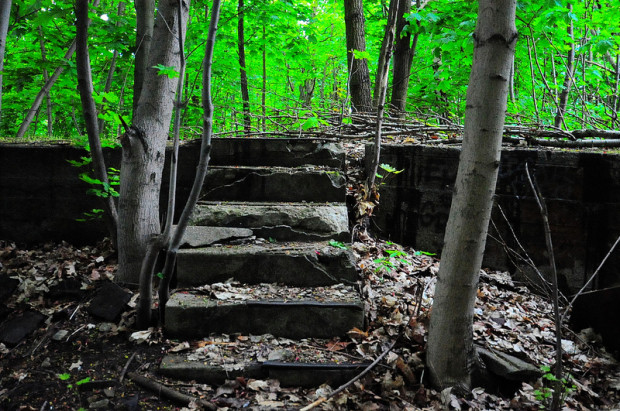 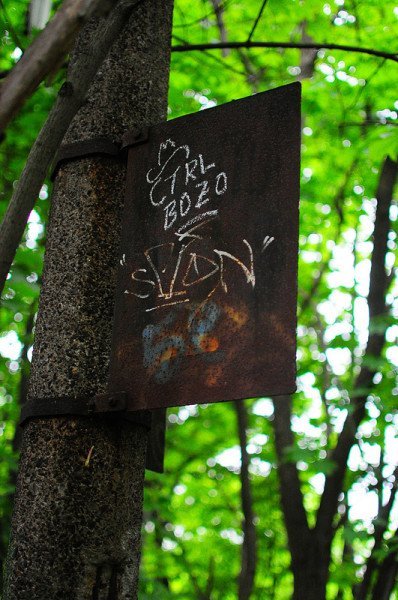 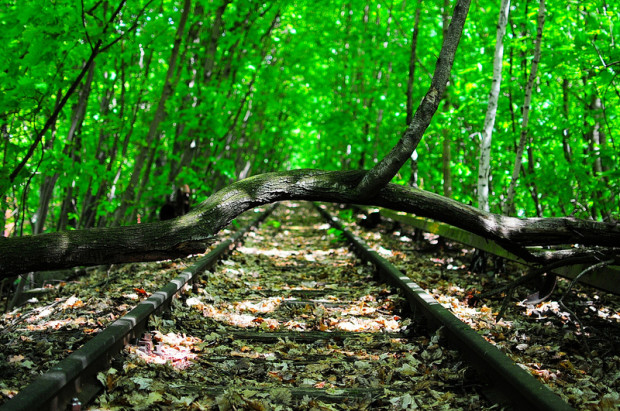 When you stand on platform 1 looking over the Siemens Headquarters you can only imagine what it was like when trains still passed through. This was probably one of the most picturesque stations in the sbahn network. But then I remember how awful it must have been waiting here in the winter, totally exposed to the cold winds and snow.

Its been over 30 years since the station closed, and for that it’s not in too bad shape. Thats probably down to the fact that there isn’t much that you can destroy here. Sure, the clocks have been ripped out long ago – not that they were ever much use, but the platform signs, the Station Kiosks and even some of the old commercials have stood the test of time. Trees are growing trough the concrete platforms, enveloping the tracks, slowly reclaiming what was once theirs. It’s interesting to see nature slowly encompassing the station as if it was trying to hide it.

After spending a good 20 minutes walking up and down the platform enjoying the view and the warm Berlin sun, I decided to wander down the tracks and see where they would lead me. I walked down the eastern end (direction Siemensdamm) of the tracks and was greeted by a lush green tunnel of trees – this would have been the prefect walk ever – that is until you realize that walking on railroad ties (the wooden blocks between the tracks) is terribly strenuous after 10 minutes.

Nevertheless its a very peaceful walk, you feel very removed from the city – despite hearing german schlager music and arabic twangs echo through the trees from the nearby plattenbauten. After a good 15-20 minutes you’ll reach the end of the tracks or at least thats how far you will come until a locked gate puts itself in your way. In theory you could go on – but you’ll be walking in plain sight a good 15 meters above the ground. Not the most inconspicuous of things to do. 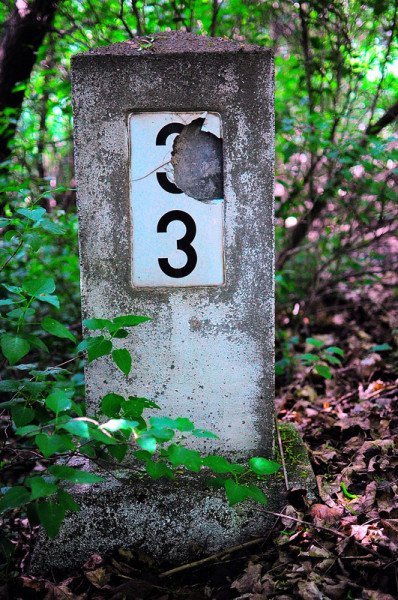 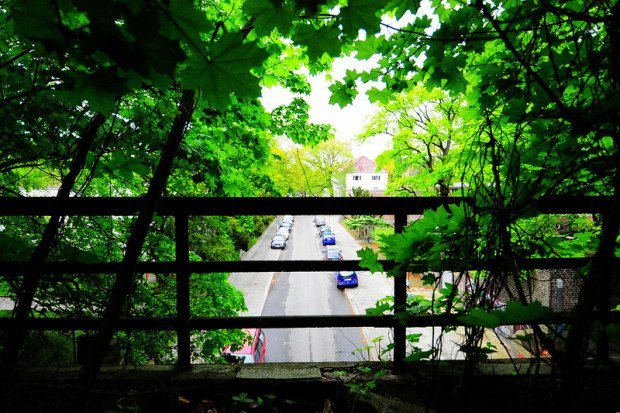 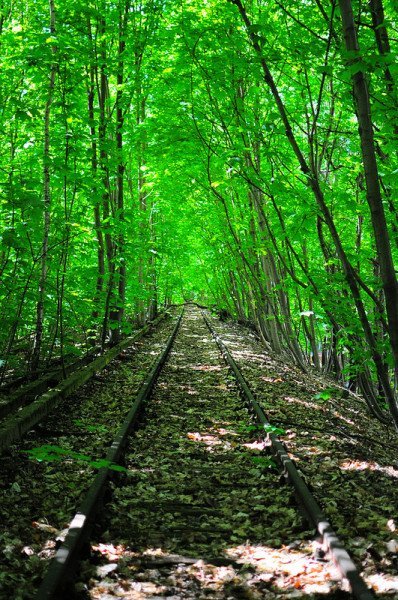 I decided to walk back to the Sbahnhof Siemensstadt and check out what was to be found in the other direction – but the overgrowth was so thick that I decided to turn back after 10 minutes.  In theory this would be a very interesting walk as well as it leads you to the Gartenfeld Endstation, but its a very tedious walk, so I decided to save this up for another day.

Visiting the Sbahnhof Siemensstadt is a pretty harmless affair. While I was there I saw several other curious people wander around, and even had a chat with a young family who were bringing along their 2-year-old child. Despite all this, don’t forget that this is a closed off station and you are trespassing. A very healthy dose of common sense is a must here.

While there are no immediate plans of tearing down the station, they have already scrapped some tracks, and renovated some of the more useful bits along the line. Who knows how long this station will continue to tower of the road below – hopefully  long enough for the forest to reclaim its space.