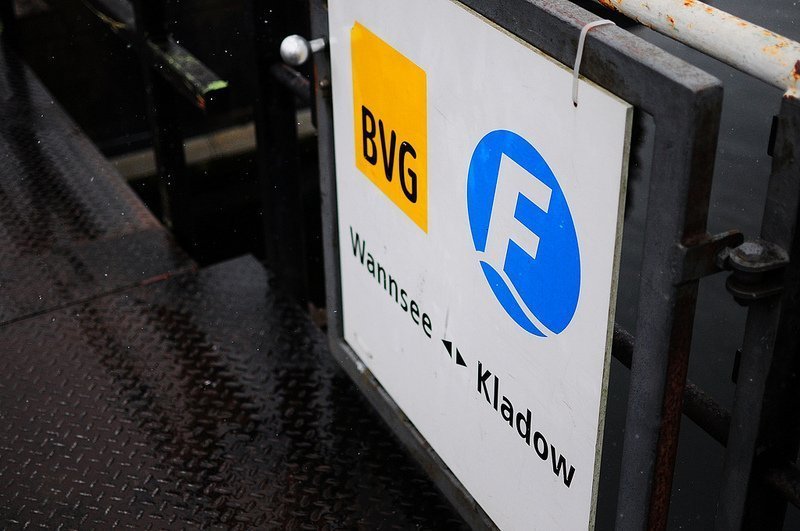 Anyone who has ever taken Public Transport in Berlin has seen the F Logo. But what does it mean? You see it almost every time you take a Bus, Tram, S or U-Bahn, but what is it? Well – few people are aware that the BVG runs a fleet of ferries – 6 routes in fact! Berlin is surrounded by a total of 66 lakes and several rivers –  and while most of them are rather puny in size, some are large enough to warrant a ferry connection. One of these lakes is the Wannsee. While the Wannsee is not the biggest of the lakes (the mügellsee is), it is by far the most well know and one of the most picturesque. Curious what it was like to take a BVG Ferry, I ventured down to the Wannsee on a cold spring afternoon (it was the meteorological start of spring) to catch a ride with the MS Tempelhof.

All Aboard the MS Tempelhof

The BVG Ferry service across the (Großer) Wannsee is actually a fairly recent institution. It started off in 1944 when the Bus Service 34 (today 134) from Pichelsberg to Kladow had to be canceled due to the lack of fuel and rubber tires. On the 26th of April 1944, the BVG substituted the canceled bus service with 16 Ferries on 2 lines which crossed the Wannsee every 30 minutes.

Because of the heavy fighting in Berlin, the ferry service was interrupted between the 20 April and 31 may 1945. Before the end of the war 24 ships serviced the route –  after the war only a third remained. By 1947 the BVG only had 5 ships left at its disposal.

In May 1956, the Stern und Kreisschiffahrt (the company that seemingly runs all of the cruise ships in Berlin) took over Ferry Lines and continues to run them under the contract of the BVG to this day. Since 1991 the Ferry service on the Wannsee carries the official line designation F10, and is one of only 2 lines which operates throughout the whole year (the other lines take a winter break). 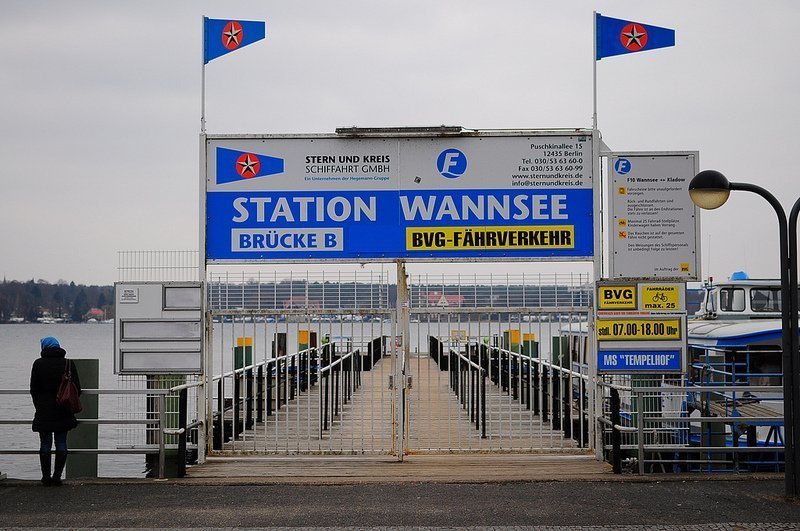 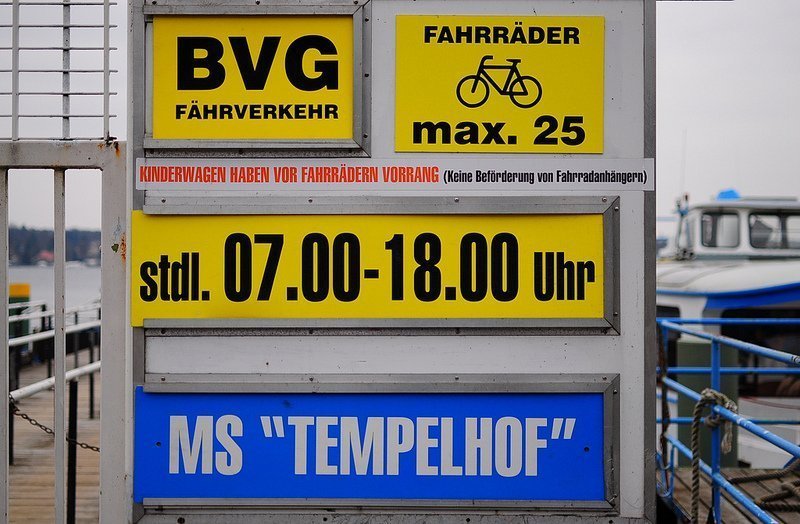 We were a bit lazy and decided to take the car down to the Wannsee. If you want a slightly more “Authentic” feeling you can simply hop on the S1 or S7 (or even the Regional Train) and get off at the S-Bahnhof Wannsee. From there its just a 2 minute walk down to the Pier and the Ferry Gate. We were slightly unsure if we would spot BVG Ferry “Terminal” – but our worries were unfounded – its relatively easy to spot. 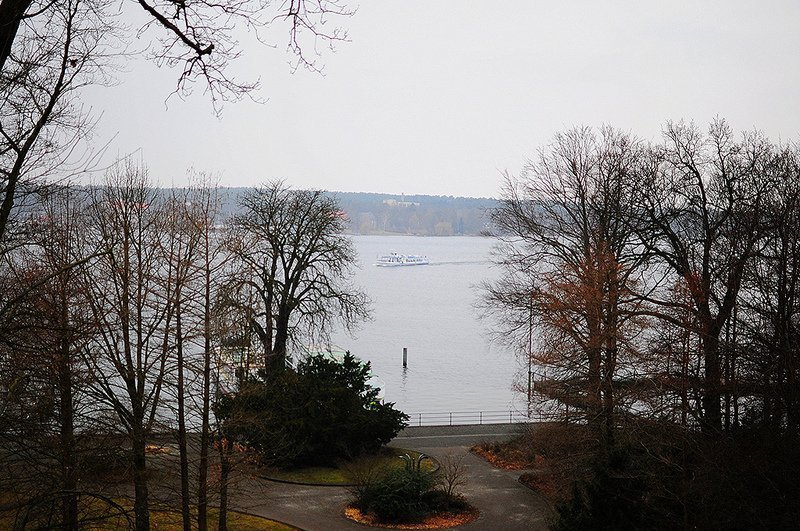 And here’s my first warning. Since 1949 – the F10 runs once every hour. If you miss it, tough luck. If you do find yourself in between ferries – id suggest wandering up the hill where you can spot a life-sized statue of Borrusia (The Personification of Prussia) and have a marvelous view over the Lake. From up here you’ll be able to see the ferry pulling into the harbor and still have enough time to walk down again and catch it.

If you came by S-Bahn, your Single Ticket (AB) will still be valid – what a bargain! A boat trip across the Wannsee for €2.40! But don’t sweat it – there’s a ticket machine close to the ferry dock, and you can even buy a ticket on-board. 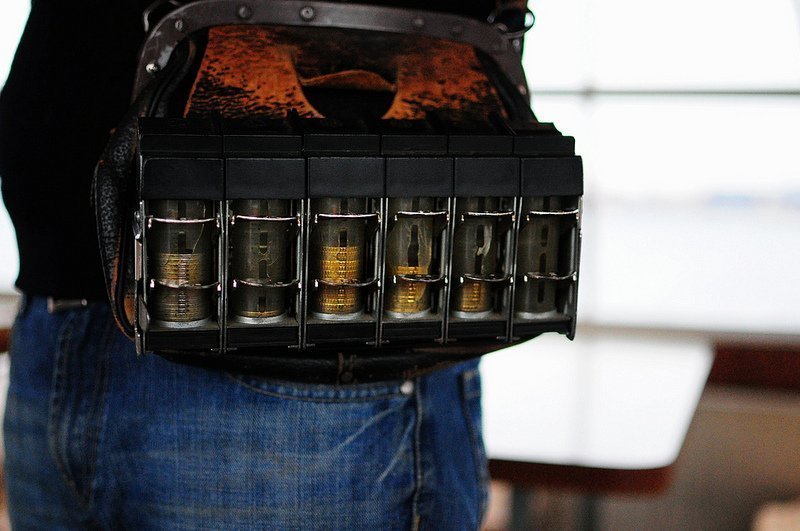 The MS Tempelhof pulled in with a surprising speed – though I couldn’t really understand the hurry. 3 families with prams disembarked – while (aside from the misses and me) a Chinese couple, 2 construction workers and a father and his daughter were waiting to get on. Not exactly rush hour I would say, but nevertheless this is Germany and (unlike the Deutsche Bahn) this boat was going to leave on time. The air was crisp and it was beginning to snow – not really the ideal conditions for a cruise and sadly the upper deck was closed – but with the minus temperatures and snow it wouldn’t have been too enjoyable anyway. So we were pleasantly surprised that the inside of the cabin was toasty warm. All that was missing now was a good tea/coffee and a sandwich. 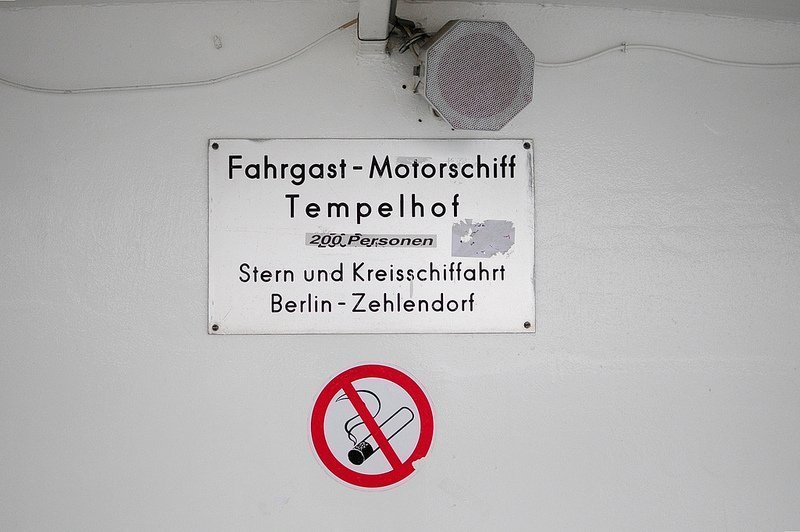 And here’s warning Nr 2: The MS Tempelhof (unlike the MS Lichterfelde) has no Bar – nor a Coffee machine. The trip across the lake is only 20 minutes long ( make that 40 minutes coming and going) – but it is so much more enjoyable when you have something to eat and drink. 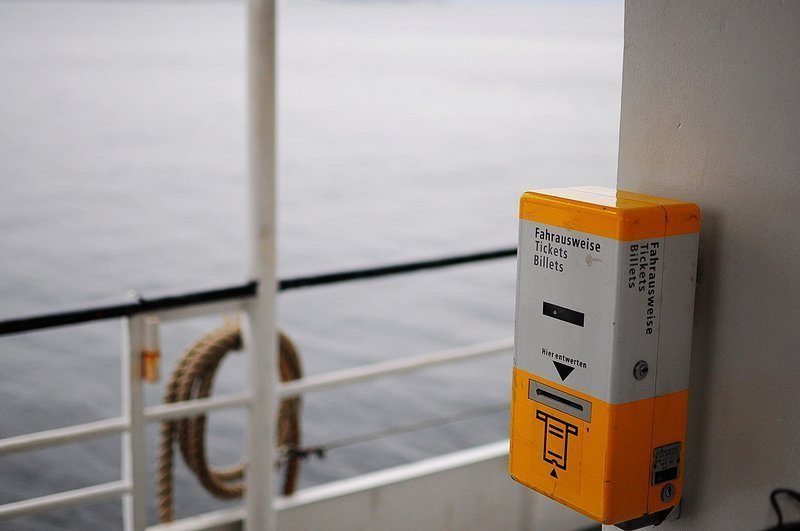 The ferry crossing in itself might seem unspectacular (it’s not a river cruise after all) but it is rather enjoyable in its simplicity. It’s a nice way to see all the historic and luxurious villas on the banks of the lake, the Strandbad Wannsee and the beautiful nature.

If you arrive early enough, Alt Kladow is worth exploring. There are a few beautiful parks and some historic architecture to be found, and if that’s not your sort of thing, there’s the Luftwaffen Museum of the Bundeswehr just around the Corner. 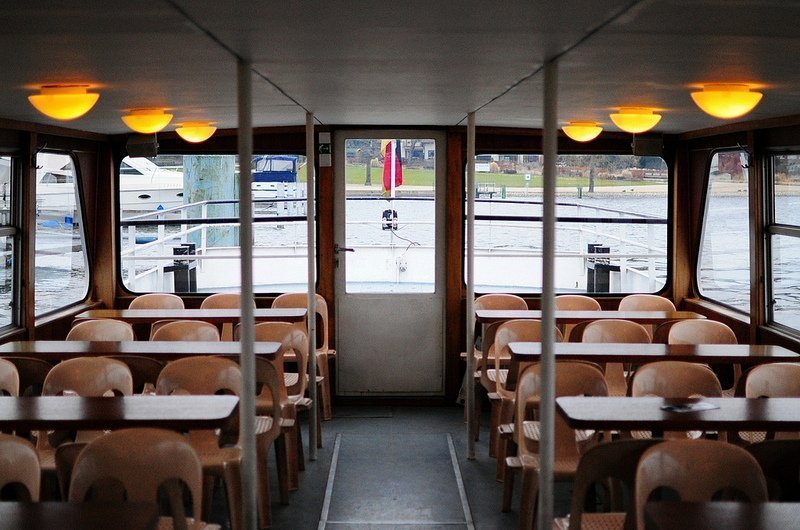 If you aren’t planning on exploring Alt Kladow and are simply in it for the round trip heres warning Nr 3:

This is probably one of my favorite examples of the German mentality. When we reached Alt Kladow we decided to stay seated as we were going to go back with the same ferry anyway. The Captain came over to us and told us we had to get out, walk on to the pier and then walk back on to the boat. Just because that’s how you do things in Germany. You’ll experience the same thing when you reach the endbahnhof of any U-Bahn or S-Bahn Station. You’ll be forced to exit the train, only to get back on it again 1 minute later. Wonderful. 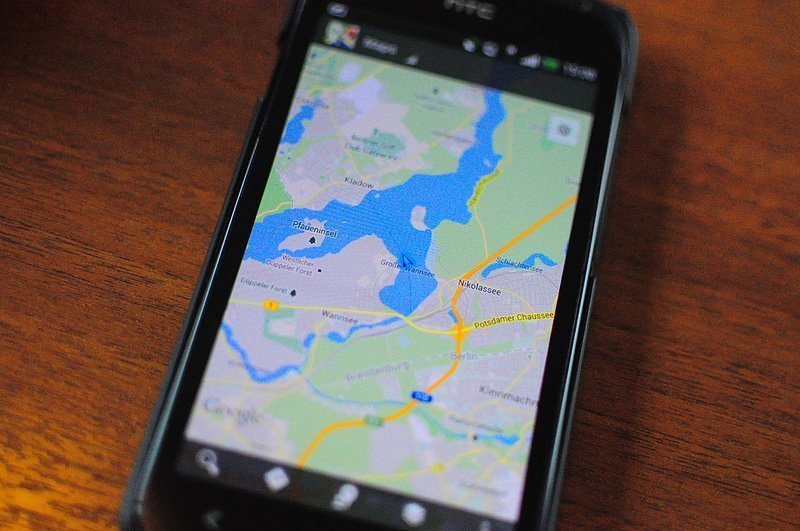 So we walked around the pier, got on the boat and stamped our tickets again. Siting comfortably snug in our plastic chairs by the heater – we enjoyed the peaceful ride back to the Wannsee Station. 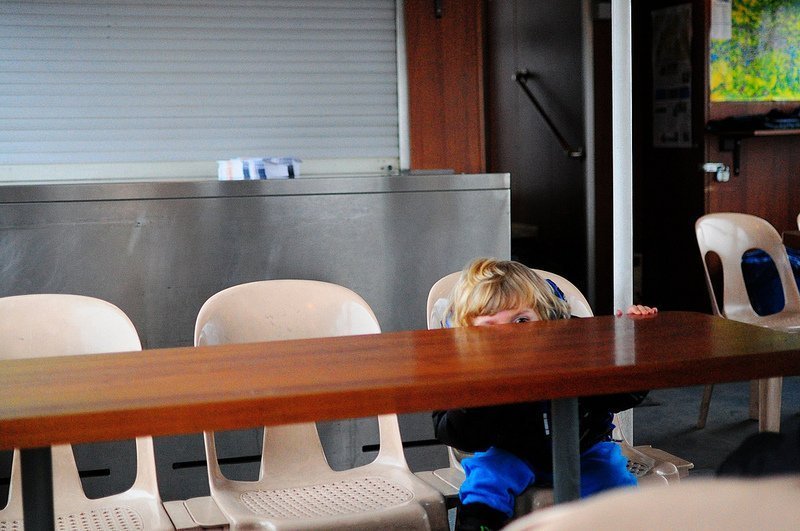 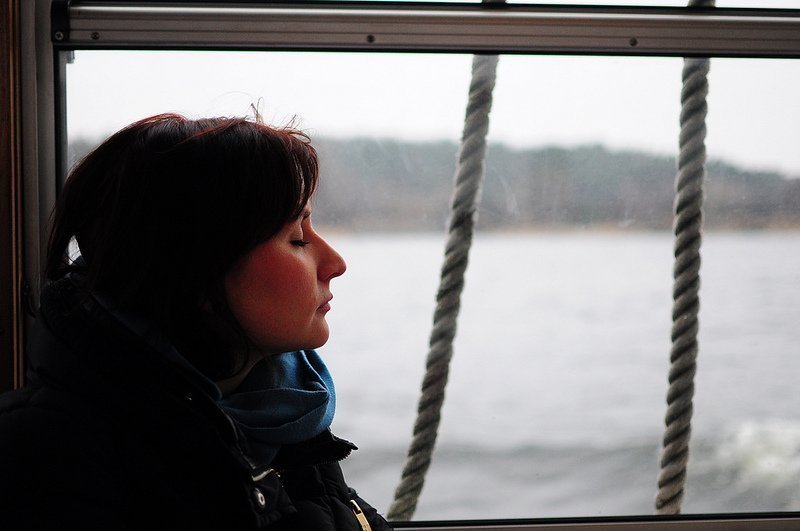 If you feel like getting away from it all and taking a cheap cruise over the Wannsee, head on down to F10 Ferry and enjoy the ride. Don’t forget to bring some tea and a sandwich.

Sundays and Holidays – 10am to 6pm (In the winter until 4pm)

All Tickets (AB-ABC) are valid for use on the Ferry aside from Kurzstrecken (the ones for €1.60)

How to get there: S-Bahn S1 and S7 Station Wannsee