“But paradise is locked and bolted….
We must make a journey around the world to see if a back door has perhaps been left open.”

Heinrich von Kleist, born on the 18th of October 1777 in Frankfurt Oder could be considered the proverbial German. Bureaucratic. Militaristic. Dramatic. Romantic. Depressive. 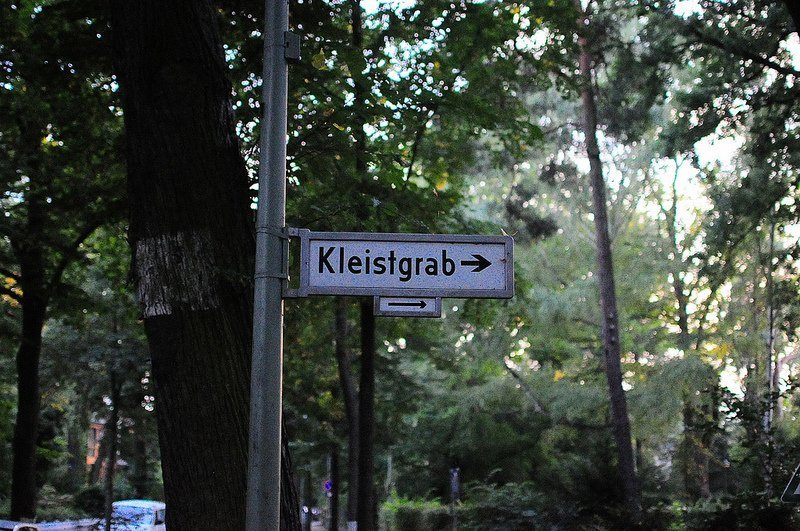 Kleist was raised by a Pomeranian noble family which was deeply entrenched in the military drill. After finishing school he joined the Prussian Military in 1772 and rose to the rank of Lieutenant. After 7 years, von Kleist decided to give up on the Military life (which he realized was a mistake) and dedicate his life to the study of science. Kleist noted in 1779 – “incomprehensible how a human being can live without a plan for his life” (Lebensplan). Despite not enjoying the military drill, Kleist sought and discovered an overwhelming sense of security by looking to the future with a definitive plan for his life.It brought him happiness and assured him of confidence, especially knowing that life without a plan only saw despair and discomfort.

Kleist visited the Viadrina University in Frankfurt Oder in 1779 and began to study Mathematics, Physics, History, Latin and Cameralism – the German Science of Administration. Having already showed an interest in Poetry and Philosophy during the early years of his life, Kleists faith in the value of knowledge was destroyed after being introduced to the work of Immanuel Kant. Kants writings caused a radical shift in Kleists worldview (the battle between reason and emotion became central theme of his writings) causing him to abandon his studies after only 3 semesters. He took up a position in the Prussian Finance Ministry. This position allowed him to travel through Europe – allegedly as a spy for the Prussian Government. Realizing this wasn’t the life for him, he secured a lengthy leave of absence and traveled through Germany, France and Switzerland, visited Goethe, Schiller, and Wieland – and wrote his first tragedy – The Schroffenstein Family. 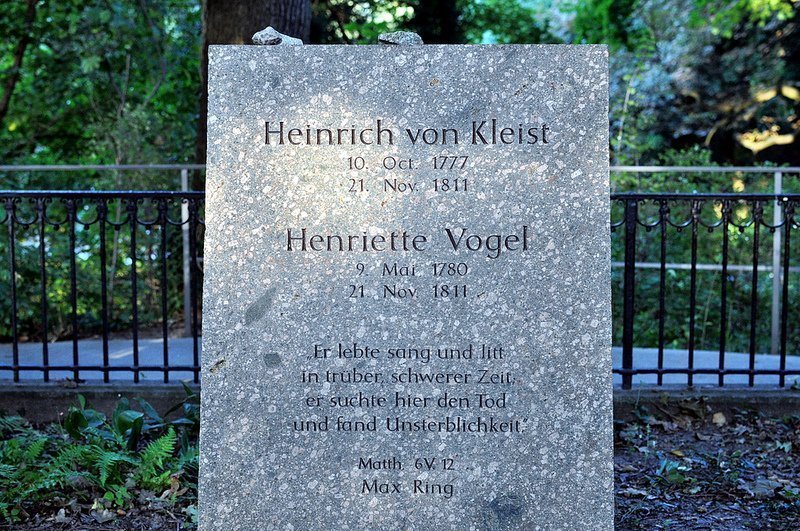 Kleist returned to his position in Berlin in 1804 – only to be transferred to Königsberg. Whilst traveling through Dresden (which was administrated by the French) in 1807, he was arrested as a spy and imprisoned. After being released he published his journal Phöbus in 1808. In 1809, Kleist traveled to Prague, but ultimately settled in Berlin in 1810 where he found work as an editor of the Berliner Abendblätter. The newspaper shut down relatively soon due to censorship, leaving Kleist to find alternative sources of income. After his play “Prinz von Homburg” was banned by Friedrich Wilhelm III. he fell into a spiral of depression which brought him to the brink  of suicide.

It was at this point which Henriette Vogel played a pivotal role in Kleists life. Henriette – a poetically and musically gifted housewife of a chief tax inspector – had met Kleist as early as 1809 and the two immediately formed a deep friendship. Henriette fell ill with terminal cancer sometime around 1810-11 and decided to form a suicide pact with Kleist. After heading out to the Kleiner Wannsee on the morning of the 21st of November, 1811, Kleist shot her and them himself. While he had no formal burial wishes, Henriette asked for them to be buried together in her suicide note. Both of them were buried where they had committed suicide – as their suicide bared them from being laid to rest in a cemetery. 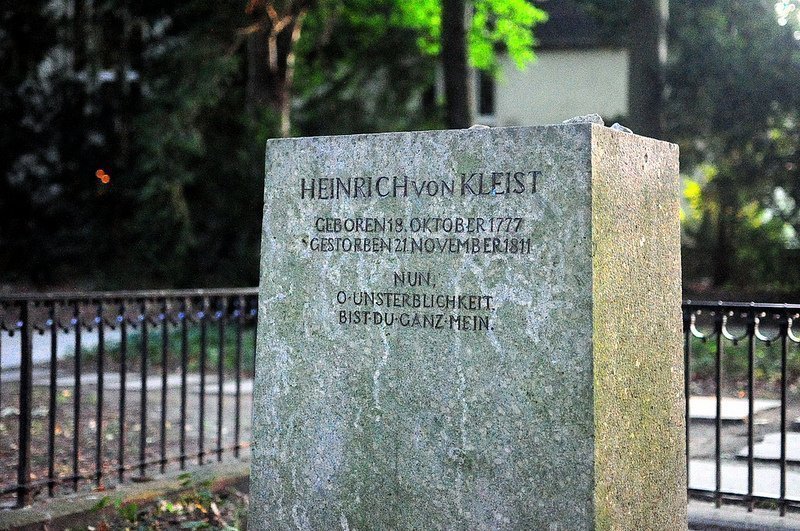 Kleist’s life was marked by the restless pursuit of ideal happiness, which however proved to be deceptive endeavor which reflected in his work. Kleists work has been difficult to classify as it doesn’t fit into the traditional schemes of Romanticism or classicism. Regardless of his literary classification though – Kleists writing has left a lasting impression on German literature. His work, as much as it was misunderstood was often interpreted as a harbinger of literary modernism as well as being an important protagonist in the sense of nationalistic and chauvinistic tendencies of the German Empire.

Heinrich von Kleist and Henriette Vogel can still be found where they were put to rest in 1811, though the granite Gravestone and the knee high cast iron grating both originate from the year 1936. For the 200th anniversary of their suicide, the whole park received a makeover. Henriettes name – which previously had its own marker – was added onto Kleists stone. 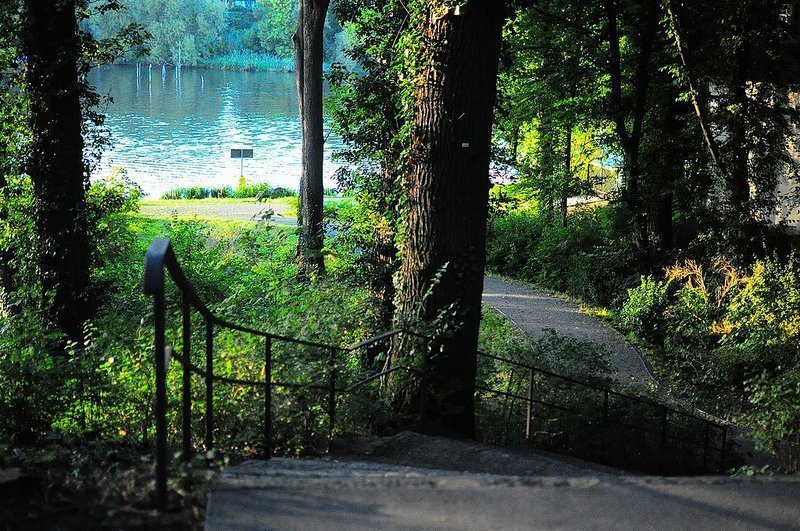 Heinrich von Kleists gravstone  had been previously adorned by the verse “Er lebte, sang und litt / in trüber, schwerer Zeit. / Er suchte hier den Tod / und fand Unsterblichkeit‘. Matth. 6 V.12“ (He lived, suffered and sung / in turbid, difficult times. / He sought death here / and found immortality) by the Jewish Poet Max Ring – which was removed by the Nazis. During the renovation of the park – the verse was added again, while the back of the stone retained its “heroic” inscription from 1941 (which was taken from Kleists Prinz von Homburg)  „Nun, o Unsterblichkeit, bist du ganz mein.“ – “Now, O immortality, you’re all mine.” 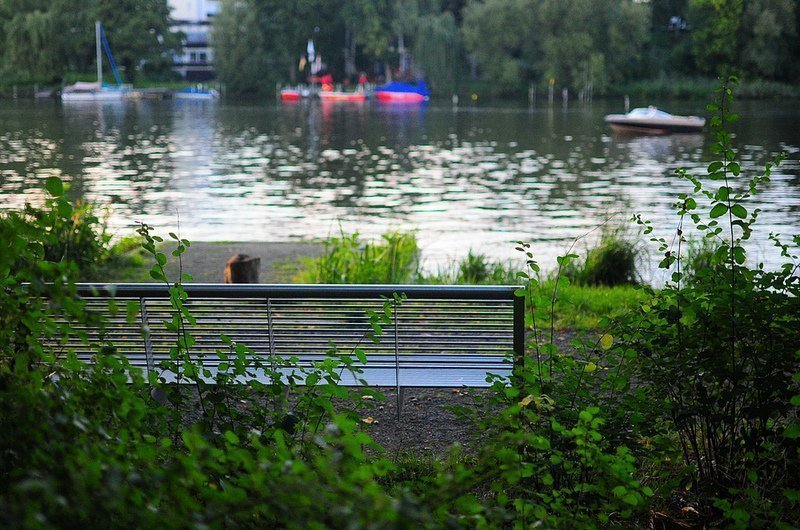 While standing on top of the hill – one soon realized why they both came here. It’s an intimate, peaceful space. Quiet and serene. A small set of stairs lead down to the banks of the Kleiner Wannsee where 2 benches provide a beautiful spot to sit down and contemplate about the (more or) less important things of life. The promenade is boxed in on both sides by gated villas – so there’s no way to reach the embankment unless one enters from the top of the park (giving the whole place a rather exclusive feel).  The grave emanates a deep sense of intimacy – something which is best enjoyed in the late afternoon when the sun hits the golden hour. 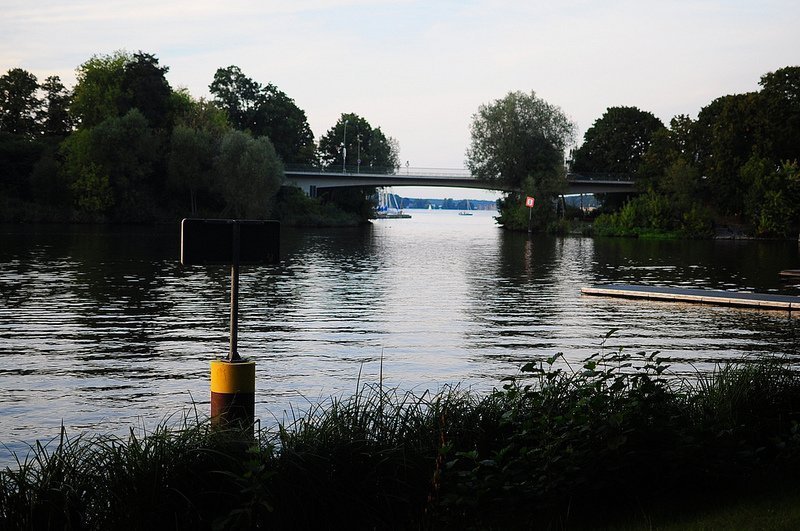 If you are looking for a reason to come and visit Kleists grave – its best combined with a Sunday afternoon ferry trip across the Wannsee (with the MS Tempelhof).

Public Transport: Take the S1 and S7 S-Bahn to the Wannsee Station. From there its just a short 10 min walk to the grave.