Germans Love Tunnels. They simply go apeshit for them. Theres simply no other explanation as to why over 7000 people queued up on a Sunday Morning after the BVG invited 5000 enthusiasts to take part in a  “Tunneltag” and walk through 500 meters an old metro tunnel.

The BVG (the Berliner Verkerhs Gesellschaft – the Berlin Transport authority) is currently extending its U5 and U55 Metro Lines (you know the one referred to as the Kanzler Bahn) in an effort to have them merge together into the “U5” line by the year 2019 (the U55 being the shortest and most expensive metro line in the world, as it currently only has 3 stations ). With this expansion The BVG is planning on creating a new Subway Station known as “Unter den Linden” (there was already a Station with that name but it had been renamed to “Brandenburger Tor” in 2009) to serve as a connection point and crossing between the U6 and the U5 metro lines. To achieve this, the Tunnel between Friedrichstraße and Französische straße needs to be torn down to make space for the new station. The U6 will be closed off between the 2 stations for the next 16 months – quite a considerable inconvenience for most commuters.

The BVG, in dire need of some good PR after a series of embarrassing mishaps, decided it would be a good move (which it was) to open up the 500 meters of Tunnel between the 2 Stations for the Tunneltag and let the Berliners get a rare glimpse of what the world under their feet looks like.

After hearing on the Radio that the BVG was hosting a Tunneltag on Sunday (1.7.2012)  I knew I had to take part. Apparently the free tickets were being handed out at the U-Bahnhof Friedrichstraße from 930 am onwards, truly an ungodly time to be out on a sunday morning but the chance to legally have a walk through one of Berlins Metro Tunnels was too tempting. According to the radio station, there were 5000 tickets available, and they would be handed out during 3 time slots. I thought to myself that showing up for the early time slot would probably be my best bet, as most people wont show up that early. Jesus Christ was I wrong. I arrived at the station at 930 sharp expecting maybe a handful of people – but I was totally unprepared for the masses of people rushing to get in line.

Apparently people had been arriving since 8am. I would judge that by 930 there were around a thousand people already queuing up, and more people kept on coming.
I took a step back and briefly debated if I should even bother getting in line, but seeing as I had already made the effort of gettig up so early, I thought I might as well try my luck.

I walked around the block and joined the queue behind  3 generations of a German Family. Everybody seemed to be in good spirits, taking this longest of queues in good humor. I think the last time this many germans got in a line was when they were leaving East Berlin in 1989.  Dark clouds started hovering over us, the German Family started laughing and hoping that it would rain, as it would probably chase away the less hardcore tunnel fans. (Un)Luckily it didn’t rain.

Surprisingly the line moved relatively quickly and after standing around for a good hour we managed to move past the first block – at this rate it would only be another hour until we would get in. As I was standing there, the ZDF (the second german public channel) mooched on over to me and asked me if they could do a short interview and ask me a few questions about the Tunneltag. I hesitantly agreed and the lady proceeded to ask me a series of stupid questions, which I replied to with a series of even dumber answers. Not intentionally though, I just had no clue what to say to her. I prayed that they wouldn’t air it on TV as I could gladly pass on those 5 minutes of fame (I scoured the german news and there was no sign of me, a lucky escape.)

After a good 2 hours I finally got my ticket and reached the entrance of the U-Bahn, the Tunneltag could begin!

Or so I thought. We had reached the entrance only to be greeted by another long queue.

A overfriendly BVG serviceman jumped out from a dark corner and greeted us. He briefly explained the rules and guidelines, that we should always watch our feet and move to the left or right of the tracks when we want to take pictures so we wouldn’t hold up the crowd.

We shuffled along until we ended up above the platform where a plethora of young women staffed some tables. They informed us that we would need to sign a paper waiving our rights incase something happened to us in the tunnel. The BVG sure knew what it was doing when it decided to staff the tables with a group of 20-year-old blonde and brunette women. Signing away my rights was never more enjoyable.

And there it was. 500 meters of a Subway Tunnel. Only at this point did it dawn on me that I just stood in line for 2 hours on a sunday morning to walk through an empty Tunnel.  A Tunnel with 0%  historical value. Undeterred by this sudden realization I marched on with the hordes of grandparents and children. 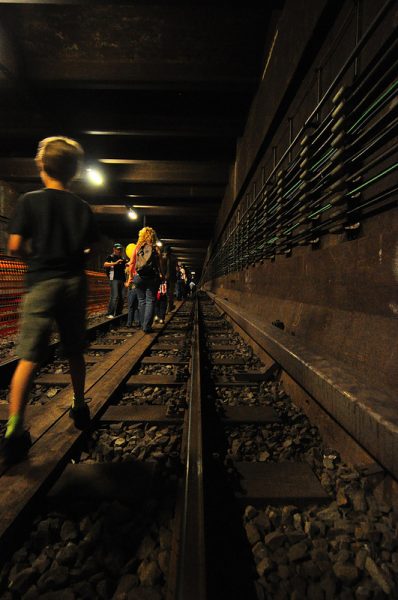 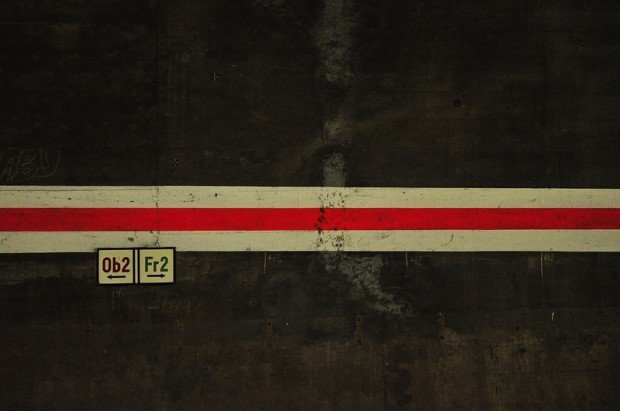 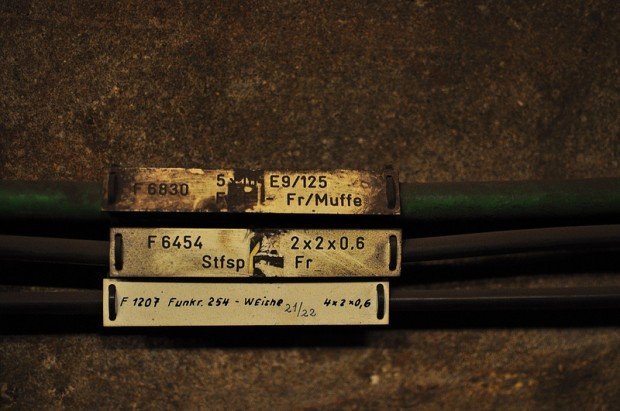 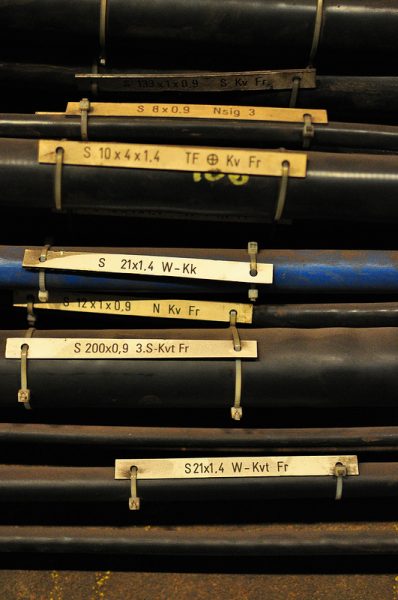 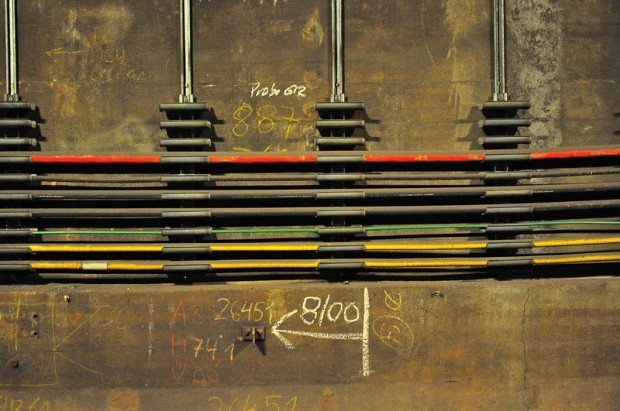 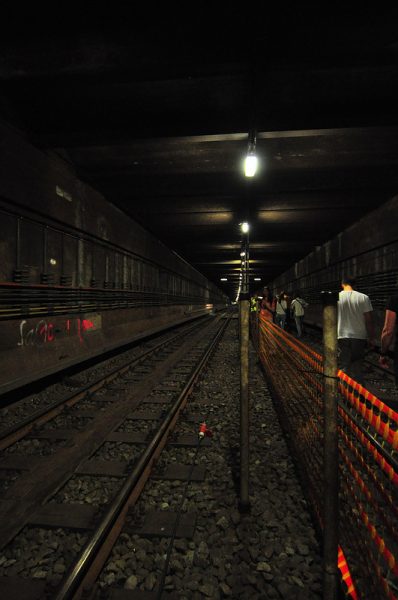 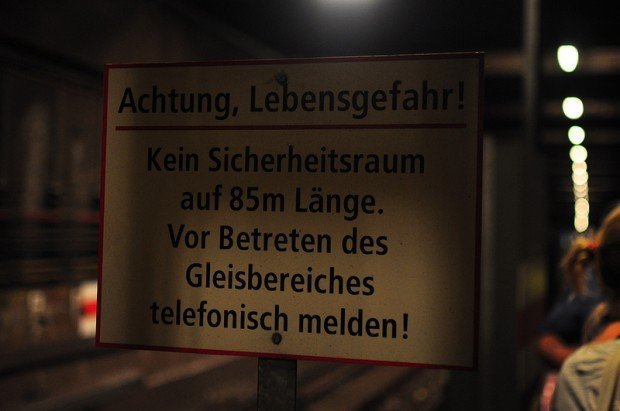 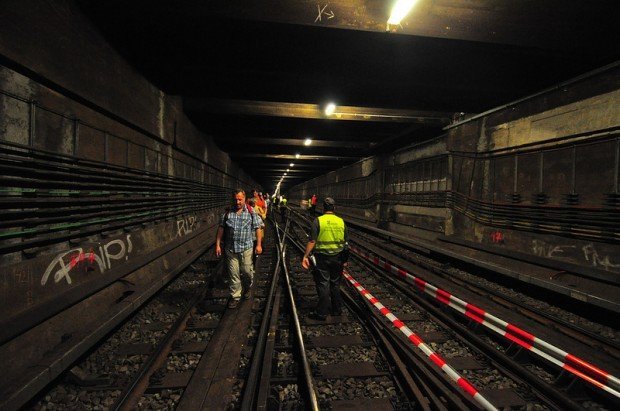 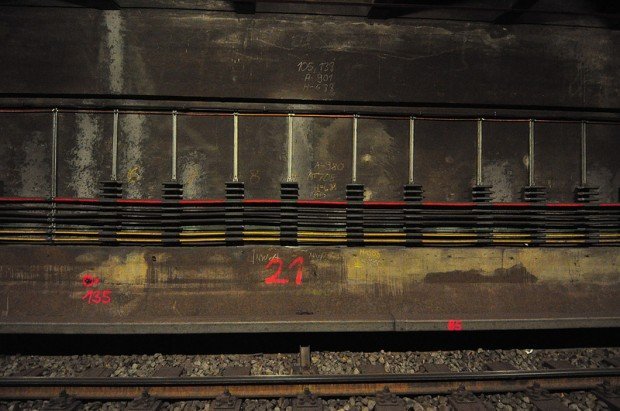 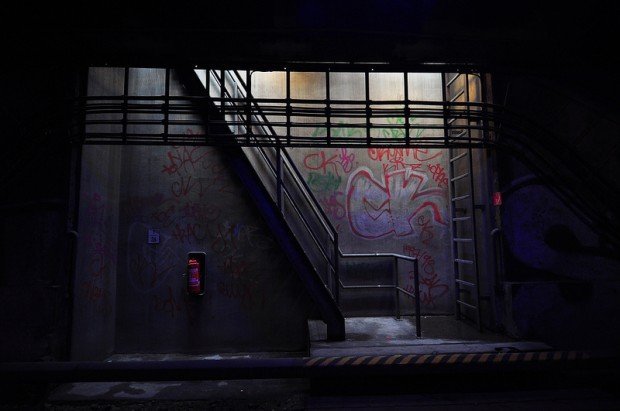 I must say despite there not being much to see aside from some electrical cables, the tracks and some signs it was pretty interesting. every few meters there were some BVG staff ready to answer any questions. I had spotted this interesting little thing clamped to the tracks and had no clue what it was for… 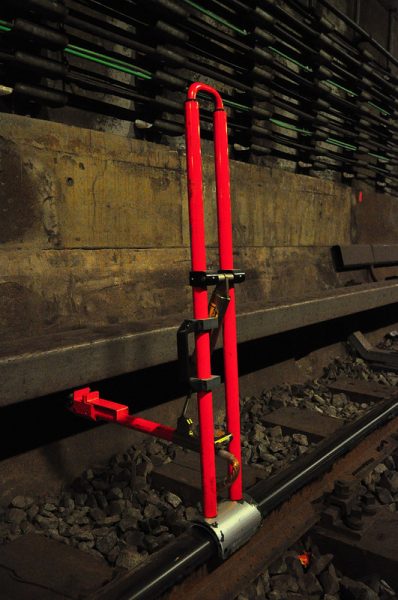 They explained to me that it was there to “ground” the tracks, so we wouldn’t get electrocuted. Good to know.

350 meters into the tunnel, the BVG had set up a stage and a video projector, where they explained the plans and construction details of the new U-Bahn Station “Unter Den Linden”. It was, lets say – informative. 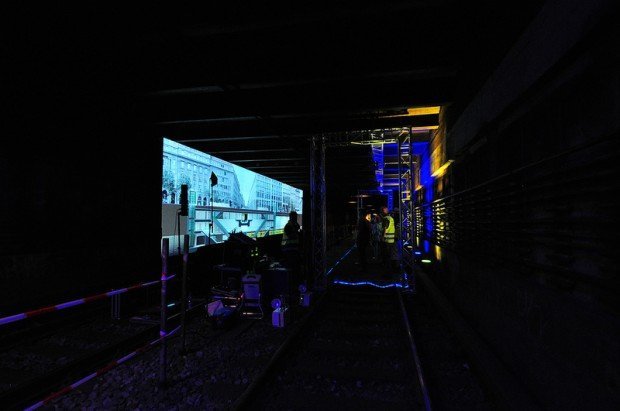 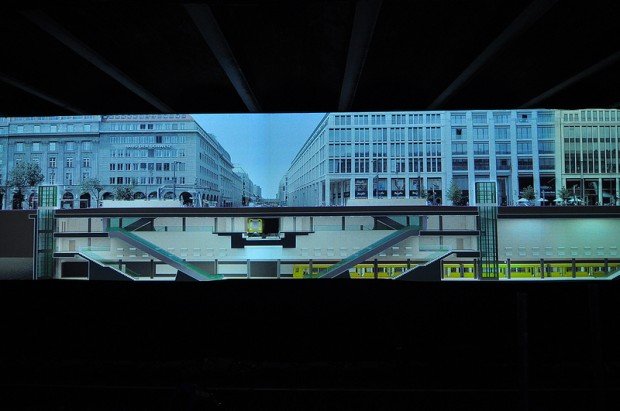 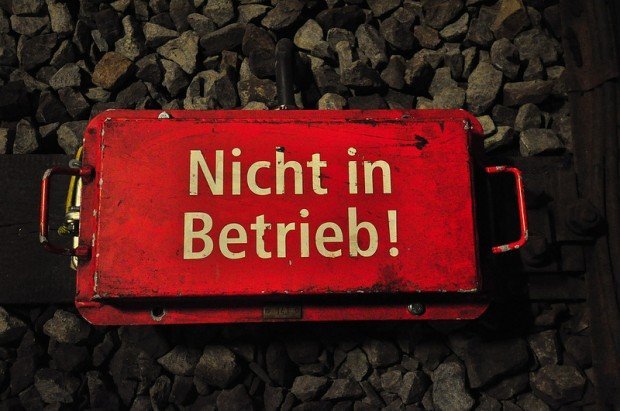 After another 150 meters we reached the end of the tunnel and were greeted by another friendly BVG lady and handed a certificate for the successful completion of the Tunneltag. Awesome. Im going to have that framed at home.

The U-Bahn Station at Französische Straße was turned into a giant info station. A full length U-Bahn was parked on one of the tracks and fitted out with construction plans and other info material.

You truly had to be a hardcore Tunneltag / U-Bahn / Architecture freak to stare at multiple U-Bahn wagons stuffed with papers like these. Or maybe just German. 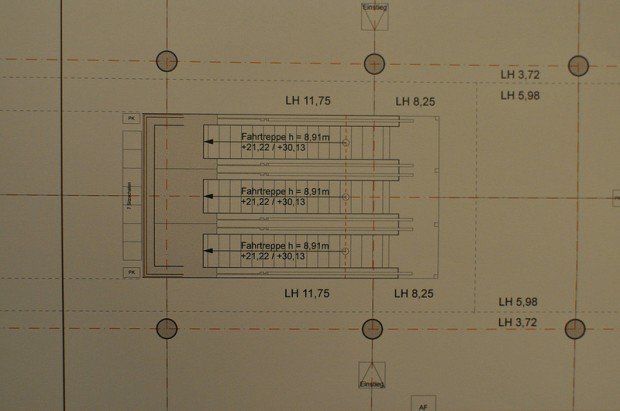 Before leaving the friendly BVG staff reminded me to head over to Dussman (probably one of the best bookstores in Berlin) to get my Tunneltag certificate stamped and pick up my goodies. Somehow I wasnt surprised that this queue was just as long at the one from the morning. It seems like the only thing Germans liked more that day than Tunnels and standing in line was free stuff. 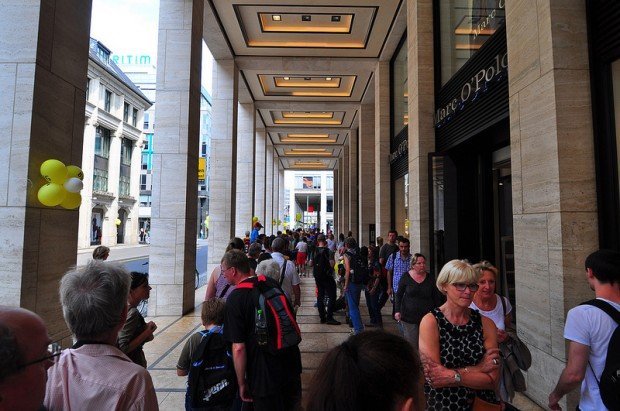 I was pleasantly surprised when a group of cheerleaders showed up flashing their panties while performing some sort of routine. 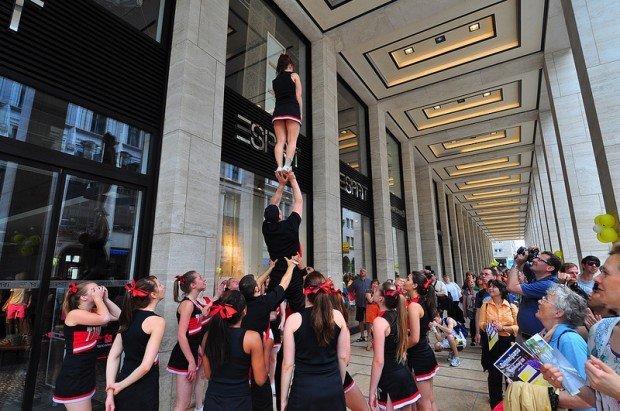 I finally reached the table, got my certificate stamped, was served up a host of vouchers and was presented with this little guy: 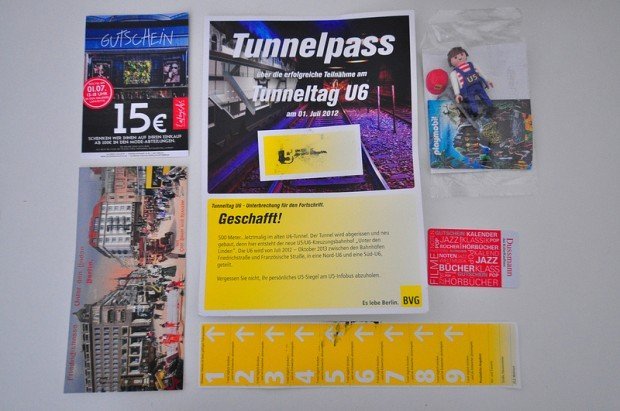 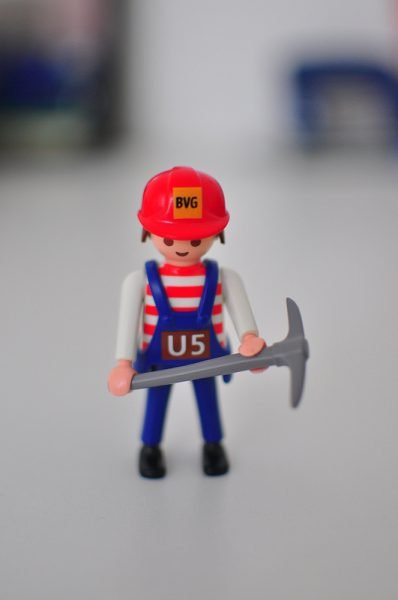 Mission accomplished I would say.

Did you miss the Tunneltag? Would you like to explore more of Berlins Underground? Visit “Berliner Unterwelten e.V“. They are based at the U-Bahn / S-Bahn Station Gesundbrunnen and offer an amazing assortment of tours through Bunkers and old Subway Tunnels and Stations. Their site offers a nice breakdown off all the tours and times. Tickets can only be purchased  upfront (not online) but they offer Tours in English. Sadly Photography is not allowed on the tours.