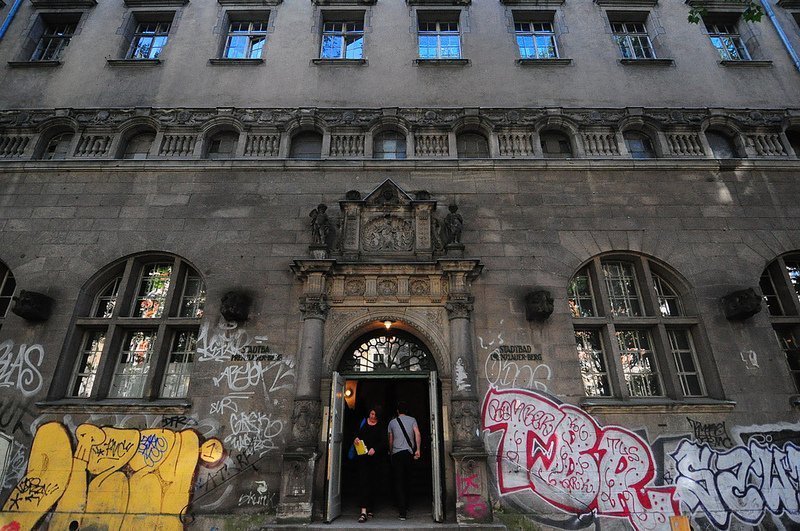 On every second sunday in September, Germany (and several other european countries) celebrates the “Tag des offenen Denkmals”(Day of the open Monuments) as part of the European Heritage Days. Monuments, buildings, and Institutions which are generally closed off to the General Public open up their doors in an effort to promote the countries Architectural and Historical Heritage.

This year over 200 Venues opened their doors in Berlin – and an estimated 4.5 – 5 million people ventured out to explore them.

Berlin was rapidly growing in the 19th Century (lets not forget that Berlin was once the largest industrial city in continental europe) but the area in between Königsstadt and Rosenthaler Vorstadt (now known as Prenzlauer Berg) was being severly neglected. The city decided to remedy this by building a Hospital and  a Cattle Market there  between 1870s and 80s. Realizing that the city was suffering from a Hygiene and Sanitation issues they also drew up plans for a “Volksbad”.

Public sanitation in Berlin was seemingly never one of the most pressing issues the city wanted to deal with.  Most houses – if they had the luxury of indoor plumbing – had to share a toilet. Like coal ovens instead of central heating, this unique architecture of having a toilet situated in your stairway has managed to survive over into our century.

Now unless you belonged to the upper crust, you for sure didnt have a Shower/Bathtub in your apartment. This is where the Volksbad comes into play. Unlike the Hallenbad – whose main focus lies on the swimming pool – the Volksbad is there to give people a chance to have a proper bath and wash. Its equipped with of showers and bathtubs, so the entire family can show up for a sunday wash.

None other than one of Berlins most important (and quite often overlooked) Architects Ludwig Hoffman designed the Bath. Now Hoffman deserves an entire post to himself – so ill save his praise for another date, but anyone who walks through Berlin today will have seen at least one of his works (i.e The Pergamon, The Märchenbrunnen, The Möckernbrücke, the Altes Stadthaus).

Hoffman was a pioneer when it came to designing buildings that not only were aesthetically pleasing but also highly functional.

Plans for a German Renaissance Stadtbad were drawn up in 1897, and the Building itself was completed by 1902. simultaneously Hoffman designed and Built a “Gemeinde Doppelschule” – A school which taught both Girls and Boys (though in separate classrooms) – adjacent to the Stadtbad. Interestingly enough, the top floors of the Stadtbad were the official apartments of the School Teachers, while the bottom 2 floors were waiting rooms, and housed the Bathtubs and showers.

In 1936 the city decided to build over the Bath courtyards due to a lack of space.  The Oderberger Stadtbad continued its existence as a public bathhouse right through the war – and quite uncommon for Berlin – actually survived the war without any structural damage. With the separation of Germany (and Berlin) the DDR continued operating the Stadtbad and even added a Sauna in 1977. The DDR as a state was too poor to support widespread housing modernizations (meaning many appartements still didn’t have proper bathrooms) so the Stadtbad not only became a hygienic necessity but also a social meeting point for the people.

A new more efficient heating system was installed which brought the addition of a fantastically ugly concrete chimney in 1985. Despite “some” modernisation attempts, cracks started showing up in pool floor and the vaulted ceilings, so the pool was closed at the end of 1986 (a similar fate shared by the abandoned Stadtbad Lichtenberg and the Schwimmhalle Pankow). The Baths, Showers, and Sauna kept on running until 1994, respectively 1997, but then the city called it quits. The DDR had some extensive renovations planned but the German Reunification put a hold to those.

After the reunification a cooperation was formed to save the Stadtbad Oderberger Straße. After 10 years of activism and lobbying – the now 1000 man strong cooperation managed to buy the Building. Again plans were drawn up to restore the building to its former glory, but they all failed due to the exorbitant costs. In 2007 the German Foundation for Monument Conservation bought the building from the Cooperation and laid out its own plans for the restoration. As with the Coops plan, this one failed as well as the estimate restoration cost had risen to 17 million euros – and the city refused to foot a part of the bill.

Come 2011, the GLS Language school (which owns the property of the where the former Gemeindeschule once stood) offered to buy the Stadtbad and restore it. The only catch to this plan was, that GLS decided that it would be a great idea to build a hotel inside the Bath. After negotiations with the city and the GFMC, GLS received approval for its Hotel plans under the condition that some parts/services of the Bath would remain accessible for the public.

Just as I was about to leave, I spotted an open door in the back. An open door is an invitation. If they didn’t want people going in there, they would have locked it.

So I ventured in and realized that I had come across the cellar, furnace and engine rooms of the Stadtbad. Only problem was that aside from the first room which had windows everything was pitch black.  Then out of nowhere at 10-year-old boy named Tim showed up with a camping lamp and asked if I wanted to have a snoop around. Slightly suspicious (cue “Its A Trap” in my head) I said sure why not and started wandering off. We ended up having an interesting chat – where it turns out that he was looking to “acquire” some Cathode lamps (those huge lamps you find in offices) because apparently they don’t flicker. So we wandered for a good 15 minutes through the underground alleyways. Periodically Tim would spot some electic cables and plug in some lamps the we found lying around so that we would have some more light. Most of the rooms that we found were empty, or they were filled with boring junk. Tim did find his cathode light which he promptly plugged in and schlepped back to the entrance. I took this as my cue and headed back outside. I need to add that I heard the rumor that apparently a few years back they found the corpse of a murdered girl in the cellar – but I couldn’t find any evidence of that during my later research.

After examining the condition of the Building, the construction and planning crews have decided to tear down the concrete chimney (most likely to happen before the end of 2012). Seeing as it was never part of the original structure, I wouldn’t count it as a huge loss.

Now, while im against any new Hotel in Berlin (there is simply no need or justification to build more of them) it seems like the restoration plans of the Stadtbad Oderberger Straße struck up a positive cord with the people. I guess most people are just happy that it’s not being torn down (unlike other “protected properties like The Eisfabrik or Berlins first public outdoor swimming pool in Kaulsdorf – the Wernerbad or the now torn down Freibad Lichtenberg), but im not sure if people will be too happy when they are charged 15 euros by Hotel/Language School to use a (once) public pool. The outcome of this endeavour has yet to be seen – a completion date has not yet been announced.