So the Berlin Summer isnt turning out quite as expected  and sunny days are becoming an increasingly a thing of the past. Luckily this sunday (well sunday 2 weeks ago) was an exception to the rule.  We decided to go for a bike ride along the spree as we hadn’t really had the opportunity to do so all year – but lo and behold my bike tire was fucked.

Not wanting to cancel out on our Bike Trip I remembered that we had a Deutsche Bahn Call a Bike Station just around the corner of our House. I had always laughed them off as a Tourist thing – much like those awful Segway tours – but not wanting to waste the Day this was probably the best opportunity to try it out.


What Is Call a Bike?

10 years ago the Deutsche Bahn introduced the first Call a Bike model in Munich. Under the name “Call a Bike Flex” the Deutsche Bahn deposited bicycles all across the City, which could be rented out by the general public. After someone who rented out a bicycle was finished with it, he could lock it up and leave it (almost) wherever he pleased. After this system proved successful it was introduced to several other German cities as well in the following  years. In 2007  a new “Call a Bike Fix” system was introduced. As the name implies, the system was somewhat modified – as bicycles could no longer be rented and deposited anywhere, but had fixed rental points all over the city. While at first it seemed like this would curb the mobility of the bikes, it actually made it far easier for the public to find them.

The Call a Bike Fix System was introduced in Berlin in the beginning of  2011. As with everything in Berlin, this plan (or so it seems) wasnt thought out very thoroughly. Fixed Bike Stations were set up, but all of them are situated in Berlin Mitte and Prenzlauer Berg.

Youll be hard pressed to find any Bikes in Kreuzberg, Neukölln or any other district in Berlin. The Deutsche Bahn has promised to set up more stations in Berlin, but almost a year later I still havent seen any new Stations in those areas.

How much does it Cost?

The first 30 Minutes are Free. Regardless if you have a  BahnCard or not. You only start paying 0,08 Euro cents a minute from the 31st minute on.

The following 2 pictures give you a nice price break down.

For both price models, you pay 8 cents a minute – that means you pay €4,8 per hour. Id say thats about average if not cheaper than most Bike Rental Places in Berlin.

If you have a BahnCard, renting the Bike out for the whole day costs 9 Euros. So after 2 hours of using the Bike you will never pay more than those 9 Euros.

If you dont have a  BahnCard the pricecap is set at 15 euros.  So youll have to use the Bike for at least 3 hours to get your moneys worth.

You also have the option of getting a yearly membership – 36 euros with and 46 without a  BahnCard.

How does Call a Bike Work?

Now I was surprised how simple it was to rent one (actually two) of these bikes. You have 2 options of how to rent a Bike. You can either download the Call a Bike App (available both on Android and IOS) or you can use the computer directly at the bike station. I opted to try out the mobile version as it seemed the most convenient.  After downloading the app you need to register for the system, entering your email, your physical address (im not sure if you can enter non german addresses) and your credit card number. This is where I encountered the first major snag. If you don’t have a credit card (believe it or not – they are not that common in germany) then you can’t use the app. A quick mention on the side – you can rent out a maximum of 2 Bikes at once. If you have a BahnCard or a Monthly Ticket Subscription, both bikes are billed at the reduced rate. 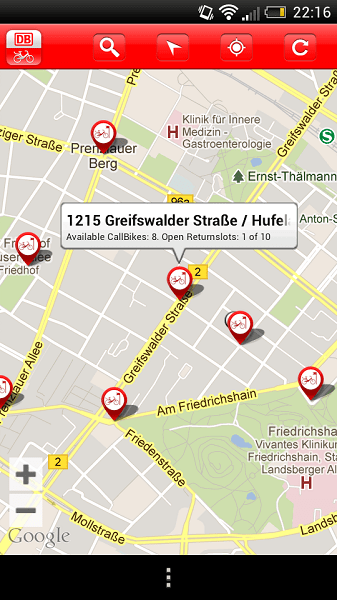 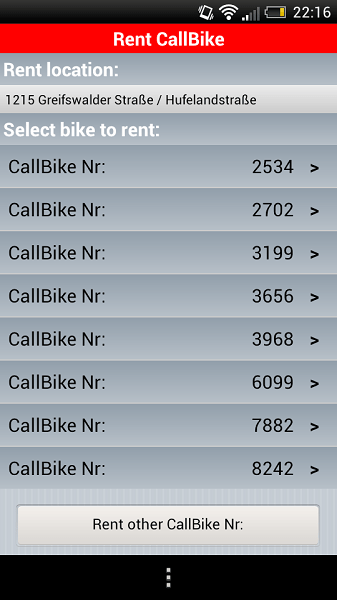 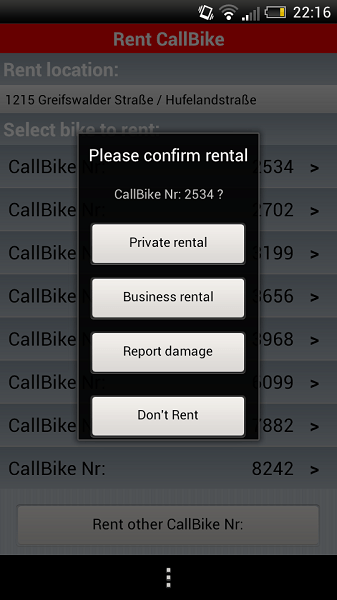 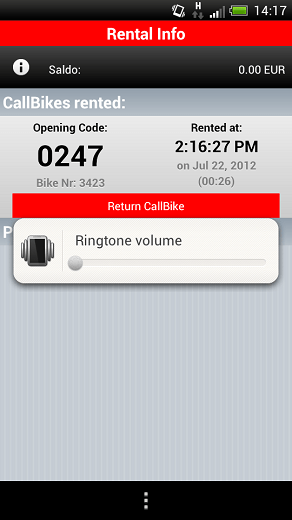 Now its important that you thoroughly check the bikes for any previous damage before you rent it, as you will most likely be made liable for any damage to the bike after you rent it (even if it wasnt your fault). If you’re satisfied with the Bike, click on “private rental” and you will receive a code for your bike. Flip open the display hatch on the left side of the back wheel and enter the code on the display. Youll now be able to slide out the metal rod and place it in the holding tray. Thats all there is too it. 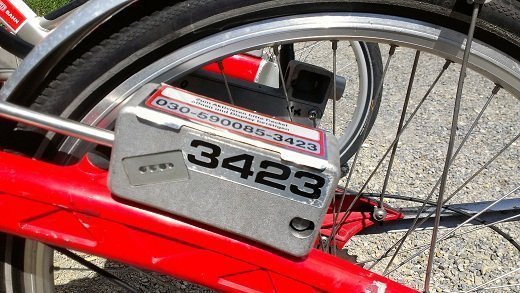 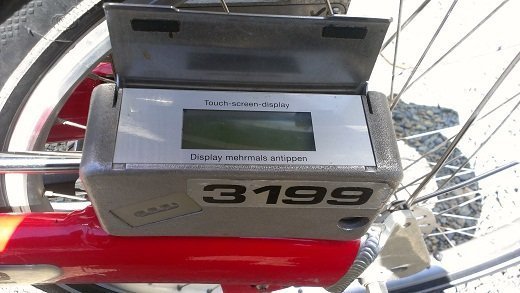 I did give the computer at the Bike Station a quick test and it was equally simple to use. In contrast to the app – the computer also gives you the even cheaper yearly rental option (24 euros per year) if you are a Student or have a VBB (a public transport ticket subscription) subscription. Another benefit of using the machine is that it takes both Debit and Credit Cards, that makes renting a bike a lot easier for most people.

Putting it to the Test:

Now as I mentioned before, make sure to double-check the bike that you want to rent for any damage BEFORE you rent it. Make sure that the tires arent loosing air, that the brakes are tight enough and that none of the lights are broken.

The bikes are moderately comfortable. You can change the height of the seat, though not its angle. The handlebar is unadjustable – so if you tend to be rather tall, your spine will end up curving like that of the Hunchback of Notre-Dame. The bikes weigh a ton. If you are ever forced to carry one up or down some stairs (there is a good chance of this happening) you will curse the gods and the DB for making them so damn heavy. the bikes are equipped with a Shimano 7 gear shifter. In the beginning I felt that they were somewhat lax, but I got used to them fairly quickly. While there are several different Bike models they only differ in the amount of Kickstands (some have 2) and the type of gear shifters (all of them have 7 gears). 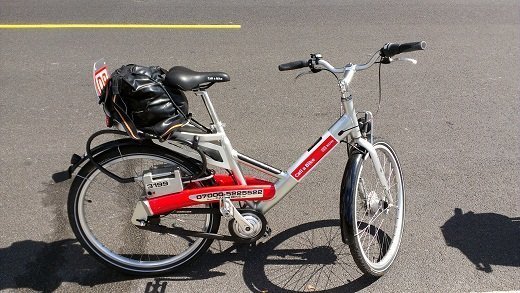 All Bikes have what looks like a shovel head at the back – which functions as a luggage carrier. Your Bag (or whatever object you want to transport) is fixed into place by 2 elastic bands with clips that work through a tension pulley system. Its crap. We were biking for a good 5 minutes when I hit a slight bump in the road and my bag (which had my camera inside) dropped onto the road. thank god there wasnt any traffic behind me. 2 clips aren’t enough to securely fasten any luggage. Whenever you drive over some of Berlins cursed Cobblestone roads – and you find a lot of that along the Spree – you’ll always be double checking if your bag is still there.


It would have also been nice if the Bikes had some sort of Bottle holder attached to the frame. Especially when its hitting 30C outside, it would have been great if you could attach a bottle instead of always having to stop and undo the luggage carrier bands to grab something to drink.

If you decide to stop somewhere for a coffee or something to eat you can easily lock up your bike again. All you need to unlock it is the opening code that you received in the beginning. Oddly enough, this was the only step which worried me a bit, as I was unsure if the lock would open again. We decided to stop for some frozen yogurt and locked up our bikes. Once we wanted to leave again, the bike lock wouldn’t open. I guess it’s just Murphy’s law. There is a number on the bike frame which you can call for assistance, or you can directly call for help from inside the app. I was immediately connected to a helpful young lady (On a Sunday afternoon!) who asked me for the 4 digit bike number. I told her that the lock wouldn’t open anymore and she remotely opened it for us and gave us a new unlock code.  The whole process took approx. 3 minutes. Awesome service.

So we decided to cruise through the city a bit more until our legs were calling it quits for the day – so we headed back home. We could have dropped the Bikes  to any station, but there were plenty of free spaces at the Call a Bike Station by our house. To return the bike all you need to do is park it in the slot and close the lock. The system automatically recognizes when and where you have returned the Bike. If you use the app it will tell you how long you rented the bike out for and how much you are billed for. It would be a nice addition if they could somehow work into the app the route that you took and how many kilometers your cycled.

So we locked out Bikes up and  this is where I encountered my second snag. When we returned our bikes I checked to see how much was going to be booked off our credit card –  After having had the Bike unlocked by the operator after our frozen yogurt,  a second billing cycle had started. So we were being charged 9 euros per bike, plus an additional 6 euros for the new Billing Cycle. I called the Customer service hotline again and explained the situation, and she instantly fixed the balance. A truly strange experience to have such efficient and friendly customer support from the Deutsche Bahn. 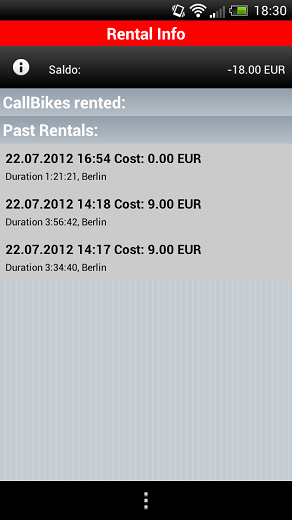 If you can look past their limited availability then renting these Bikes is a pretty good deal. If you are just visiting the city I wouldn’t recommend renting them out for anything less than 3 hours (the price/service ratio doesn’t really work out) but if you use them for the whole day then the prices are cheaper than most Bike Rental places you can find in the city.

Do you live in Berlin (Mitte)? Do you have a BahnCard? The you might as well invest the 36 Euros for the yearly rental. Ride it for 4 days and your virtually using it for free for the rest of the year.  Even if you don’t have a BahnCard shelling out 46 euros for a year isn’t a bad deal.

Sure you can buy a *cough*stolen*cough* bike in Kreuzberg or at Mauerpark for the same price – but this way you will feel less guilty and don’t need to spend a small fortune to get it fixed when it breaks down the first time your ride it, or when you pull it out from storage after Berlins 10 Month Winter.